What is the Fanatec CSL Elite?

The CSL Elite is the most accessible gaming wheel Fanatec has brought to market since the 2009 Porsche 911 model, made for the last generation of consoles.

Fanatec doesn’t make cheap products, however, and this is still the most expensive racing wheel we’ve reviewed. Our bundle costs 689 euros, or £586 at December 2016 exchange rates. This is more expensive than an Xbox One; in fact, you could even make a decent entry-level gaming PC for that money. However, the CSL Elite is rather special.

Before you run away screaming, the price difference between this and the comparable Thrustmaster setup might not be as great as you think. Add a £329 Thrustmaster TX racing wheel to the T3PA-PRO pedals and you’re looking at £478, RRP. 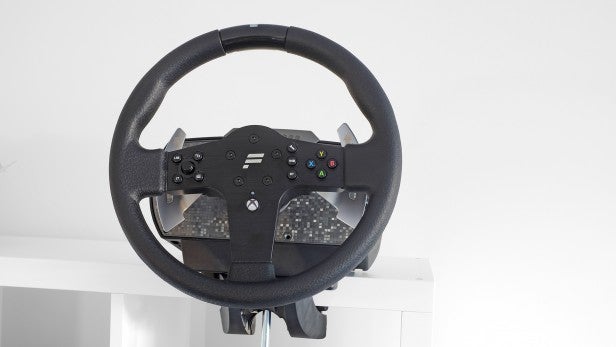 The Fanatec wheel system is highly customisable. There are a couple of wheel bases, four sets of pedals, more than 10 wheels, and separate handbrakes and shifters.

All this isn’t supplied with the CSL Elite package, but you do get everything you need. It includes the CSL Elite wheel base, the CSL Elite Pedals LC pedals and the Xbox One P1 Steering wheel. This wheel rim costs 150 euros on its own, and that it’s the cheapest Fanatec provides some indication about how high-end the system goes.

There’s one wheel that costs 479 euros, without base or pedals. Ouch. 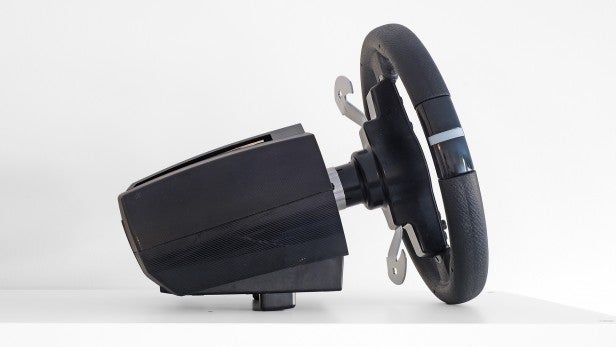 Having used most of the popular racing wheels on the market, the Fanatec CSL Elite’s style is evident as soon as you pull the item out of the box. It’s much less simple than a Thrustmaster TX or Logitech G920, but is also a lot more customisable and flexible.

This doesn’t mean you need a pro-quality racing seat to buy one of these, however. The Fanatec CSL Elite comes with a universal clamp to let you attach it to a table or stand. I’ve been using an old Speedblack Evo wheelstand. There are hard mounting points if you have a higher-end rig, however.

The more advanced, less-friendly style comes from the wheel’s UI. Unlike a Logitech or Thrustmaster, the Fanatec CSL Elite has an on-wheel menu system. This lets you alter an array of settings on-the-fly that you’d normally have to head into menu systems or even driver settings to tweak.

The downside: it’s initially baffling. This isn’t a wheel you just plug in and forget about, especially when fewer games provide dedicated profiles for it than a Thrustmaster model. 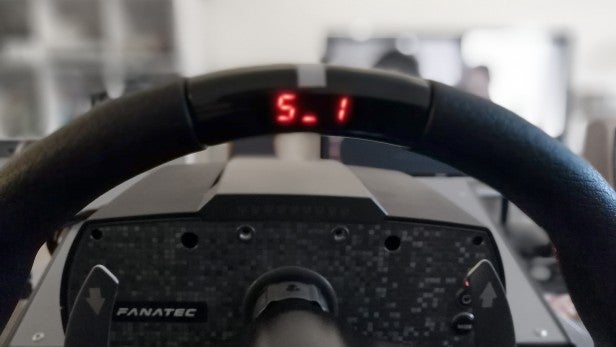 Here’s a quick summary of what’s on offer in the menu system.

Sensitivity: alters the turning circle of the steering wheel. The wheel base has 1,080-degree rotation, but this isn’t suitable for all types of cars. You have fine-grain control, or can let the driver choose the rotation by setting this to Auto.

Force Feedback: customise the strength of the force feedback motors from 0-100%.

Shock: fiddle with the strength of the rumble motors from 0-100%.

ABS: simulates the feel of ABS when you brake hard.

Linearity: alters how sensitive the wheel turn is towards the centre. Increasing this (0-100) makes the centre part of rotation less sensitive, giving you more control over very fine wheel movements.

Deadzone: change how much of a deadzone there is at the centre of the wheel.

Drift: increasing this lets you reduce the wheel resistance to make drifting less of an arm-tiring struggle.

Force/Spring/damper: (PC only) lets you fine-tune the feel of the various components of force feedback.

These on-wheel controls let you fine-tune how the wheel operates, overriding what the game “tells” the CSL Elite to do.

For the first few days I found myself accidentally entering this menu all the time, but it’s a great feature for the hardcore crowd. And if you’re considering spending £600 on a wheel, you should at least be a bit of a racing game enthusiast.

You enter this menu by pressing a button denoted by a spanner icon on the steering wheel, making the menu options pop-up in an LED display at the top. The Xbox P1 wheel then has a little joystick that lets you flick through the various parameters, and there are even five different profiles that you can programme in for different games/cars. 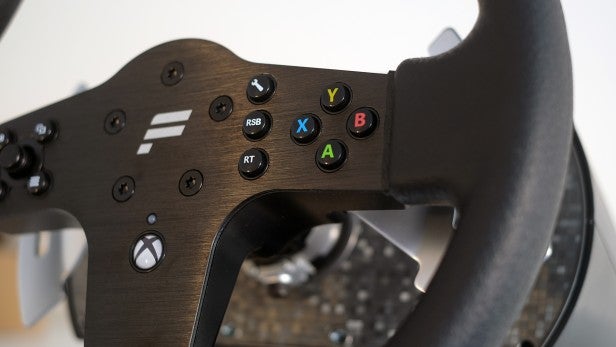 This isn’t your average console wheel. However, the rest of the layout is much less intimidating, taking its buttons from a normal Xbox One pad, to let you flick through menus without needing to keep a gamepad by your side.

Using the P1 steering wheel the set boots up to its Xbox One mode, but switching to the PC one is just a matter of pressing the Mode button on the base.

The wheel is registered and the buttons do let you flick through the system’s menus, but as soon as you press down on the joystick, the CSL Elite continually scrolls downwards. Game over. Don’t buy this for anything but PC and Xbox One use.

Fanatec CSL Elite – P1 Xbox One Steering Wheel and Base

Let’s take a closer look at some of the hardware, starting with the P1 wheel. Since this is a fairly tech-heavy wheel, its build is more prosaic than what Thrustmaster sells at a similar price.

For £149 you can get an Alcantara or leather steering wheel from Thrustmaster, but the P1 has a rubbery coating. Similarly, the central plate is metal but the outer part of the column that plugs into the base is plastic.

You might expect a more luxurious feel for £600, but remember this is Fanatec’s entry-level setup. 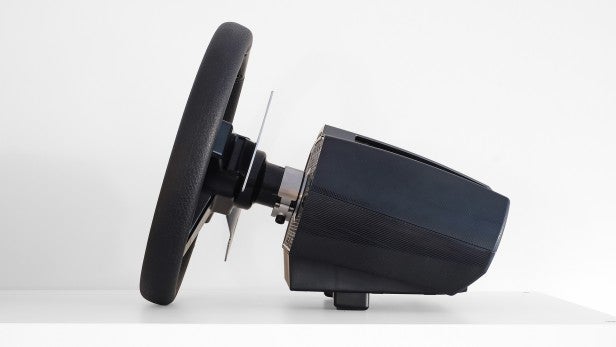 It seems Fanatec has stripped down the gloss to get you high-end components at a reasonably sane price. Take the base as an another example: its housing is plastic, and doesn’t feel as heavy-duty as the wheel.

The base’s design is also uncharacteristically showy, with a multi-shade pattern of little grey tiles on its front. I quite like it, but the chatter online is mixed.

I found the Fanatec CSL Elite very easy to mount, and it feels very sturdy even attached to a basic wheel stand. It also has a multi-colour rev display on the base’s front, used with compatible games. I’d argue that a basic plastic housing shouldn’t matter too much when it’s the internal skeleton that takes all the force of the wheel’s torque.

One part that does raise an eyebrow, though, is the pair of gear-shifters on the P1 wheel. They’re solid aluminium spokes, but unlike almost every other high-end wheel I’ve used, they don’t have clicky feedback. A smoother feel is a definite departure from the norm. Again, I rather like it, but some won’t since gear changes feel less pronounced.

The standard Fanatec Elite base and wheel aren’t all that flashy in some respects, but the pedal set is far better than the one Logitech and Thrustmaster include in their packages. Its board has the full clutch/accelerator/brake trio and is immensely sturdy.

All metal apart from the rubber tops used on the pedals, it has an industrial-grade feel. The pedals are also large, seeming much more serious than often toy-like, entry-level racing pedals. 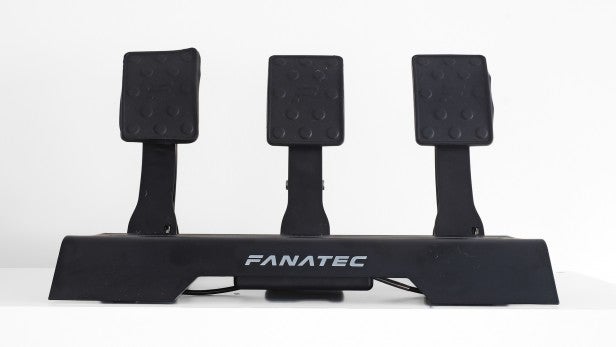 Just like the wheel base, it’s hugely customisable too. The brake’s progressive feel can be tailored to your tastes. It can go firmer than any other set I’ve used; really it’s far too stiff unless you have a rig that lets you screw down the board.

Thankfully, altering the action is very simple. Behind the pedal you’ll see a set of rubbery buffers that depress as you push down on the brake. In the box you get three different sets, each requiring a different level of force to depress. The hardest to depress require 90kg of force, for a very stiff feel. I ended up using the lightest rings, which I’d recommend unless you have a super-sturdy setup and are really after a true sim-like feel. 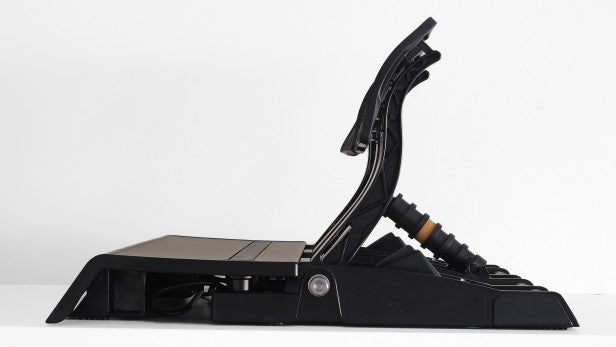 You can also move the pedals around, making the accelerator sit closer to the brake for an easier heel-toe action. It’s a bit of a pain to do, however.

Finally, you also get a set of different covers for the pedals. The rubbery tops are actually just covers on top of solid metal bases, and can be replaced with stick-on sandpaper-like grippy pads. 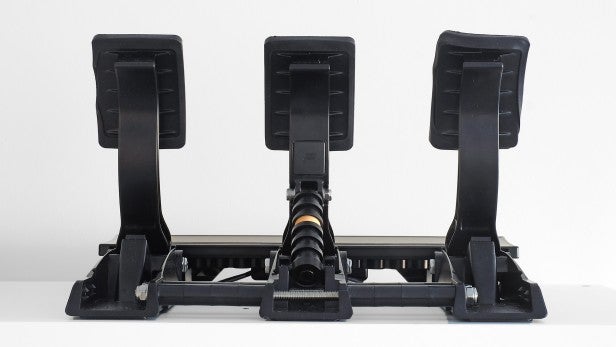 Force feedback is the most exciting part of any racing wheel – without it, you might as well just use a cheap model.

The Fanatec CSL Elite has by some margin the most powerful force feedback motor I’ve used, including those of the Logitech G29 and Logitech TX. At 100% power, with a game that really makes use of force feedback – such as Project Cars – the experience can be borderline unpleasant.

Despite having used most of the racing wheels currently on sale, I still struggle when things get hard core. Trying to control a Pagani around the Nurburgring while fighting with the force feedback engine feels like a real struggle. It’s a level or two up from the brushless motor system that the best Thrustmasters use.

If you love a really intense experience while gaming, you’ll love the Fanatec CSL Elite. I ended up setting the force feedback to around 55%, which gets you the extra immersion of feedback without acting as a constant reminder that a sports car is really a carbon-fibre death machine. 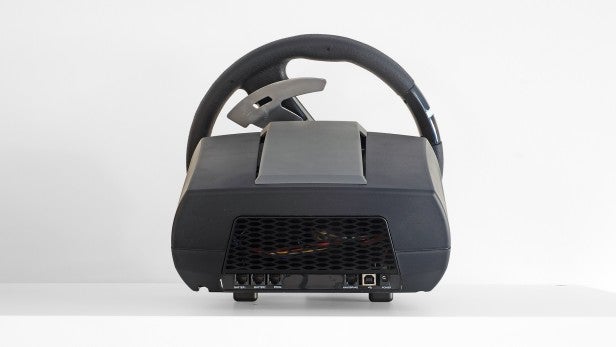 The difference this makes is that the Fanatec is significantly smoother than any Thrustmaster or Logitech wheel – radically more so than the Logitech G29/G920. Thrustmaster models are closer in terms of smoothness, but still suffer from a greater “gnawing” when you’re pulling against the feedback motor on a turn. There’s none in the Fanatec; it’s the smoothest racing wheel I’ve used.

It’s also very quiet – the brushless system is almost silent. However, after a short session you’ll hear the fans start up. These live in the wheel base and keep the motor cool enough to avoid burning out.

From memory, the fans at max spin seem a bit louder than the Thrustmaster RS300’s, roughly the same volume as a desktop PC’s case fan. It’s less distracting than gear or belt noise, though, and more-or-less constant once they’ve fired up.

I have few complaints about the CSL Elite’s force feedback. However, the one incongruity I did notice was that, unlike some models, there is no “rumble” of the wheel itself, with all feedback provided by the main base motors.

Fanatec gets away with it because the main motor is so smooth and effective, but it does affect the character of very small bits of feedback – such as driving over road lines a little. However, you do get in-wheel rumble with Fanatec’s more expensive wheels using this very base.

Should you buy the Fanatec CSL Elite?

Would I buy one? I’m not so sure. There’s a real risk of upgrade-itis with the Fanatec, as you may end up wanting a new steering wheel after six months or so, and the cheapest Alcantara/leather model costs 229 euros (around £200). I’m not sure my bank account can handle Fanatec CSL Elite ownership.

However, if virtual racing is one of your main hobbies, the upgrades over the Thrustmaster TX and its brothers are real. To get something better, you’ll have to save up even more for a direct drive wheel such as the $1,299 SimXperience AccuForce or Thrustmaster’s elusive, upcoming GT Sport. And who knows then that might arrive.

The best PC and Xbox One racing wheel you can get for under £1,000.