There are a lot if ideas running around at the moment on how to expand the games market outwards. How do you get not only the traditional hardcore and casual gamers, but the older men, the younger women, the middle-aged execs, the working mums? The answer might be innovative controls (Nintendo’s revolution and Sony’s EyeToy), family games (SingStar and popular quiz titles) or just community (Xbox Live!). However, it could be something a lot more simple. Maybe we just need to see more games that grown adults don’t feel embarrassed playing. 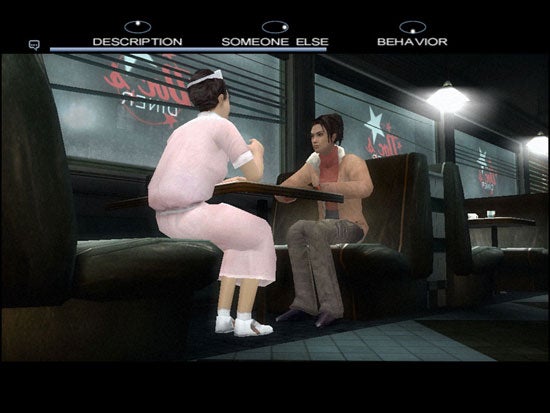 True, we already have plenty of games that suit an adult audience, but not everyone wants to play sports, re-enact history or join the armed forces. And isn’t there something a little adolescent about the gang-violence of GTA, no matter how intelligent the movie references and post-modern flourishes get? We’ve got the game equivalents of Aliens, Spider-Man, The Texas Chainsaw Massacre and Hero – they’re great, and there’s nothing wrong with that – but what about The Godfather, Raging Bull or Seven? Where’s the Gone with the Wind, the Citizen Kane, the North by Northwest of games?


Well, Fahrenheit isn’t up there yet, but it’s a step in the right direction.


It’s a good start, for instance, that I don’t think of Fahrenheit in terms of a third-person action or adventure game, though it certainly has elements of both. Instead, I think of it as a thriller. I’m not just thinking about the presentation, but about story, style and emotional effect. It’s also a good sign that Fahrenheit is an unashamed ‘interactive movie’ – it even says New Movie – on the options screen, yet it’s as deeply involving as Half-Life 2 or Resident Evil 4. 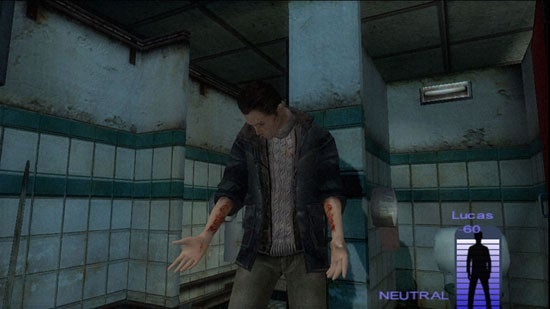 Admittedly, I can’t pretend that the story or characterisation is up there with Seven or The Usual Suspects, but Fahrenheit certainly kicks off with a bang. Like any great Hitchcock thriller, Fahrenheit opens with an ordinary guy in the wrong place at the wrong time and in a whole lot of trouble as a result. Lucas Kane comes to in a diner washroom, with a knife in his hands, arcane symbols cut into his arms, and a bloody corpse on the floor. It’s not so much a case of whodunit, as what-made-me-do-it, and Kane’s quest for understanding and his fight to escape the authorities are the motors that drive his story forwards.

However, as soon as Kane flees the scene something crucial happens. The game switches protagonists to focus on Carla and Tyler, the detective team investigating the crime. Where minutes ago you were trying to evade capture and hide crucial evidence, you’re now searching for clues and trying to uncover the killer’s identity.


This switching of view, from fugitive to detective and back again, continues throughout, and while it’s not a new idea in cinema, it works brilliantly here to a) help the player piece together the story and b) ratchet up the suspense. The latter is vital: the game has more than its share of nail-biting sequences where Kane attempts to evade discovery or not slip-up during questioning, and by switching between these more intense episodes and the more leisurely detective scenes, Fahrenheit maintains a tight pace with plenty of room for the tension to ebb and flow. I won’t say too much for fear of spoiling it. All I will say is that it gets darker and scarier as it goes on, not to mention chilling in more ways than one. 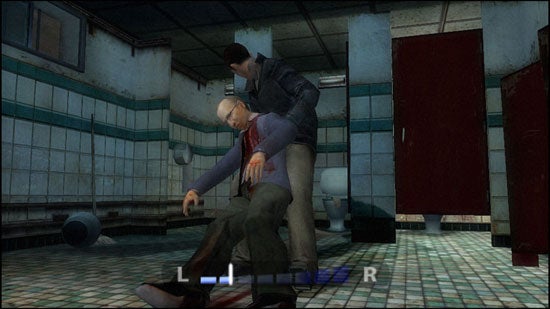 Now, the game’s basic structure is set in advance – this isn’t a plot you can reconstruct as you see fit. What you can do is ensure that Kane survives to follow the story to its conclusion, and make decisions that affect the emotional tone of each scene. The key thing here is an intuitive control system, with movement on the left analogue stick and a context-sensitive right stick control used to select options or route the dialogue along particular avenues.


Whatever you’re doing, time is nearly always a factor, but this helps to keep the action dynamic and the suspense at fever pitch. And the decisions you make – Kane’s actions in the washroom, the questions the detectives ask at a crime scene, a response to a phone call – have consequences for your protagonist’s wellbeing. It’s not just a question of emotional nuance, though this is an important part of the game’s appeal, it’s a vital practical consideration. Kane, Carla and Tyler all have an emotional gauge that tracks their mental state. If Kane’s reaches zero, he succumbs to the pressure and kills himself. Eating, sleeping, doing good deeds and getting somewhere with the mystery keeps him afloat. Failing tasks or opening emotional wounds drags him down. It’s a simple device that ties you to the character in a very real way. 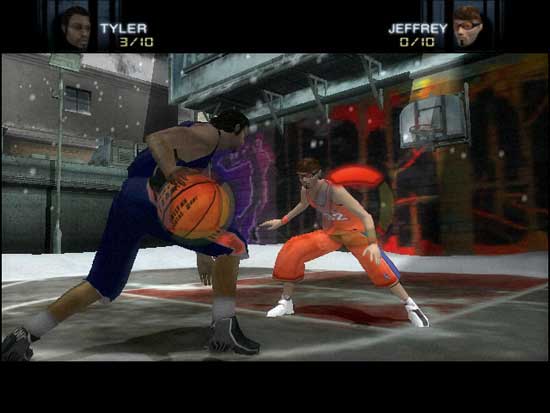 Here’s another: Fahrenheit takes time to give its characters a sense of life and personality. It’s not afraid to put in a scene that does little to propel the story onward, but just hits a note to emphasise Carla’s loneliness or Tyler’s conflict between his work-life and his love-life. Fahrenheit might not quite make you weep, but it can certainly touch you in ways you won’t expect. 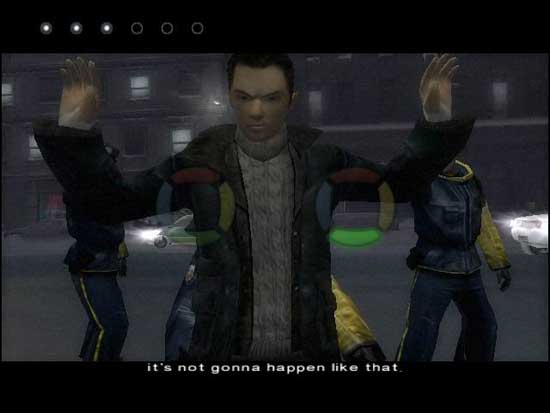 What’s more, Fahrenheit has a superb, heavily cinematic way of presenting the action. It’s not that the graphics are anything particularly special on a technical level – the character models and locations are detailed enough to make the story work, but there’s nothing here to make your jaw drop – it’s the way the game uses split-screen framing, movie-style compositions and snappy editing to build a mood or keep you on the edge of your seat. Kudos, too, to whomever had the sense to go to David Lunch-regular Angelo Badelamenti for help on the soundtrack: the brooding orchestral themes go a long way to creating the game’s potent atmosphere.


This is all really, really good stuff; exactly the sort of thing that would make Fahrenheit appeal to those who would watch CSI on TV or The Sixth Sense at the cinema, but who would never play Metal Gear Solid 4 or Legend of Zelda. However, Fahrenheit is the victim of one slightly dubious decision. It’s very heavily reliant on the sort of “event” sequences that characterised Shenmue. In key action sequences, the words “Get Ready” appear and you’re suddenly trying to duplicate patterns with the analogue sticks or hammer the shoulder buttons in repetitive fashion. On the one hand, these give the game a few moments of action and a little variety, but on the other they can prove extremely frustrating and for some will seem out of place. Imagine you were reading a detective novel and you suddenly had to stop to complete a particularly tough cryptic crossword before the next clue was revealed, or that your episode of ER paused for you to play a game of Operation every time there was a procedure. It might be fun, but wouldn’t you find it annoying? 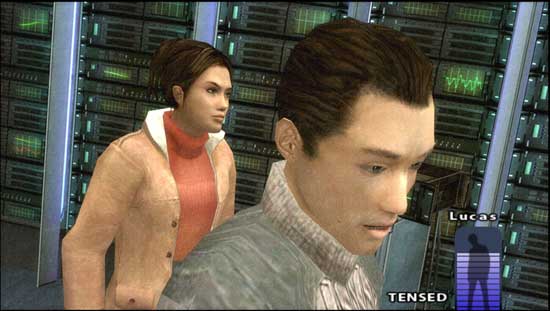 Still, these never hold you up for too long, and the pull of Fahrenheit is strong enough that you’ll persevere just to find out what happens next. All the same, that’s me writing as a gamer that has put up with these things before and will doubtless put up with them again. The sad thing is that they will put off some of the mainstream audience that Fahrenheit has made such sterling efforts to reach. One day a game will come along that takes the ideas and skills displayed here and uses them to create a masterpiece. Fahrenheit isn’t it, but it feels new and extraordinary all the same. For now, that’s more than enough.


You will either love or hate the action sequences, but Fahrenheit would never leave you cold. A taut supernatural thriller with real emotional impact.