Facebook Portal TV feels like a genuine attempt to turn your living room into something out of science-fiction. Whether people will want to swap their smartphone for a television for personal video calls is questionable, but there's no doubt Portal TV is packing some impressive technology and potential.

The Portal TV is new smart home gadget from Facebook – yes, Facebook. It plugs into your television to turn your widescreen display into a hub for video calling via Facebook Messenger or WhatsApp. With Alexa integration, you’ll be able to make and answer calls with just your voice, resulting in your family/friends faces popping up on the big screen to replace Phillip Schofield.

This isn’t just a basic Alexa-integrated TV webcam: the Portal TV is packed full of high-tech hardware, allowing the camera to track your face and keep it in shot, while you move around your living room. An ultra-wide sensor can keep multiple people in the frame at once, while also letting you focus on one individual if roaming toddlers in the background keep disturbing the shot.

What’s more, Portal TV has extensive software support, allowing you to mess around with Instagram-style AR filters during a video call, or watch a film from Amazon’s Prime Video library (if you have the subscription) with a friend in another home.

Facebook Portal TV price – How much will it cost?

The Facebook Portal TV will cost £149, and sits between the other Portal smart home devices: the Portal Mini (£129) and standard 10-inch sized Portal (£169).

This seems pretty expensive at first glance, but considering all the high-spec hardware inside, you’re getting good value for money – so long as you’ll make good use out of TV video calling, of course.

Facebook Portal TV release date – When will it be available?

The Facebook Portal TV will be available to buy on 5 November.

Facebook also confirmed that its other Portal smart home devices – the Portal and the Portal Mini – will begin shipping on 15 October.

Chatting to your pals and family members via a TV-based video chat isn’t a new concept – it’s been shown off in many sci-fi movies and shows for quite some time, including the astonishingly accurate and tech-predicting Back to the Future. Decades on, however, it hasn’t really come to fruition in our homes.

Sure, it’s possible to make a video call on your smartphone/tablet, Skype via a laptop, or even via ChromeCast to a bigger TV. However, none of those forms offers the simplicity or immediacy of being able to command your television to “call grandma,” and then seeing her wrinkled face pop up on your widescreen display.

Well, this is all about to change – and the company to bring such a product to the masses is none other than Facebook. For us Brits, to see Facebook releasing hardware outside of the Oculus brand is an uncharacteristic move. However, it quickly became apparent through my hands-on demo how well this new device fits into Facebook’s ecosystem. 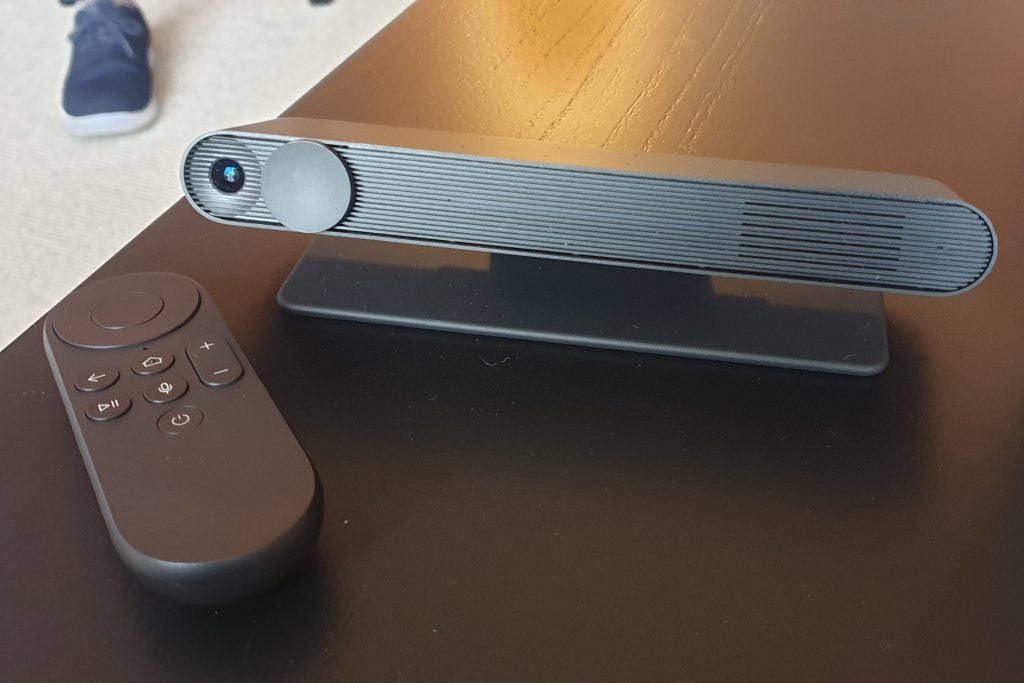 Not only does Portal TV allow easy integration of all the photos you’ve uploaded to Facebook and Instagram to act as a cycling screensaver on your TV, but it also uses Facebook Messenger to initiate and accept video calls.

A Facebook representative flicked through the various menus via voice control. The Portal TV currently supports Amazon’s Alexa voice assistant, but the Facebook team confirmed more will arrive with a later software update, with Facebook’s own Portal assistant confirmed and Google Assistant mentioned as a possibility.

Alexa works perfectly well, accurately recognising and responding to my demands. Facebook claims its own Portal assistant will be better optimised for communication apps and Facebook’s own applications, but I’d be perfectly happy if Alexa were to remain the sole option. And if you’d rather not use a voice assistant for navigating the menus, Facebook also includes a small remote control.

During the demo, the TV sprang to life with an “incoming call” notification”. A Facebook rep answered the call via Alexa and then a live feed popped up of two other Facebook team members sitting in a separate hotel room. The presentation of the footage was pretty much like what you’d get with Facebook Messenger on phone. A small box in the corner showed video of my face, while the rest of the screen showed the two people with whom I was on a call. 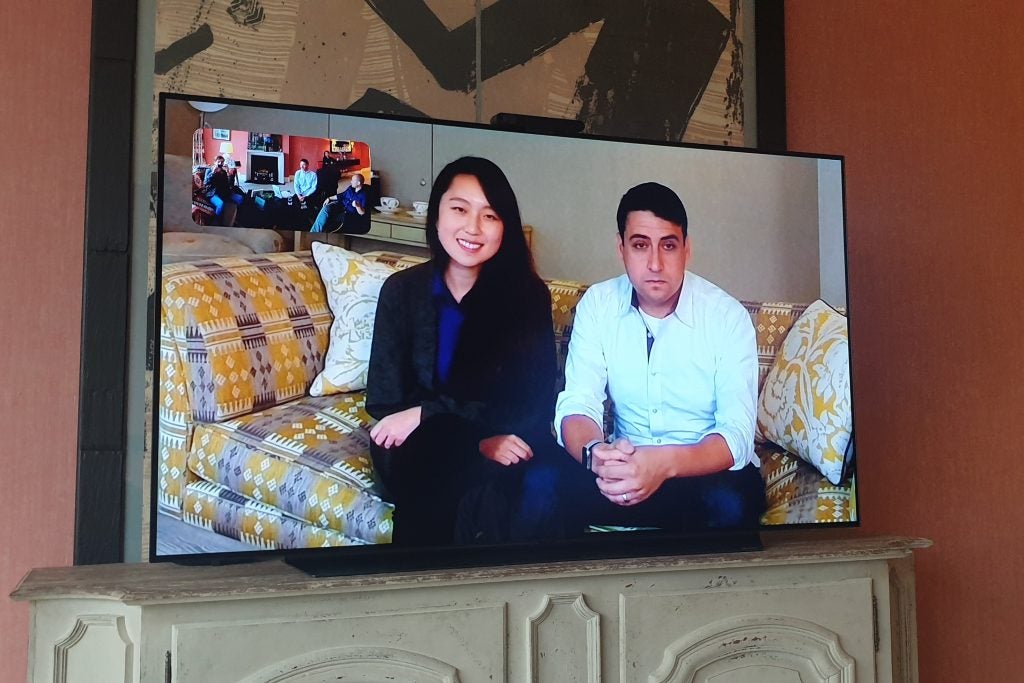 Video quality was decent, although not very sharp as a result of it being blown up to television size. Portal TV has a 12-megapixel camera with a video resolution up to 720p. This isn’t particularly high; I’m a little disappointed it doesn’t hit Full HD (1920 x 1080) at the very least. Nevertheless, it still gets the job done to a satisfactory standard.

There were a few connectivity issues, however, with the video feed breaking up on several occasions. Facebook assured me it was due to the shoddy Wi-Fi network in the hotel rather than anything to do with the Portal TV. That’s a reasonable excuse, and with Facebook recommending bandwidth speeds of 500Kbps, it shouldn’t prove to be an issue with most homes.

That said, I feel Facebook could have included an Ethernet port on the device’s rear so it isn’t limited to Wi-Fi connectivity. Facebook’s reasoning may well be to keep the design simple, since the Portal TV only has ports for power, HDMI (for output to television) and USB-C (for data transmissions).

The Portal TV can be clipped to the top of your TV or, if preferred, sat on furniture below thanks to its own built-in stand. 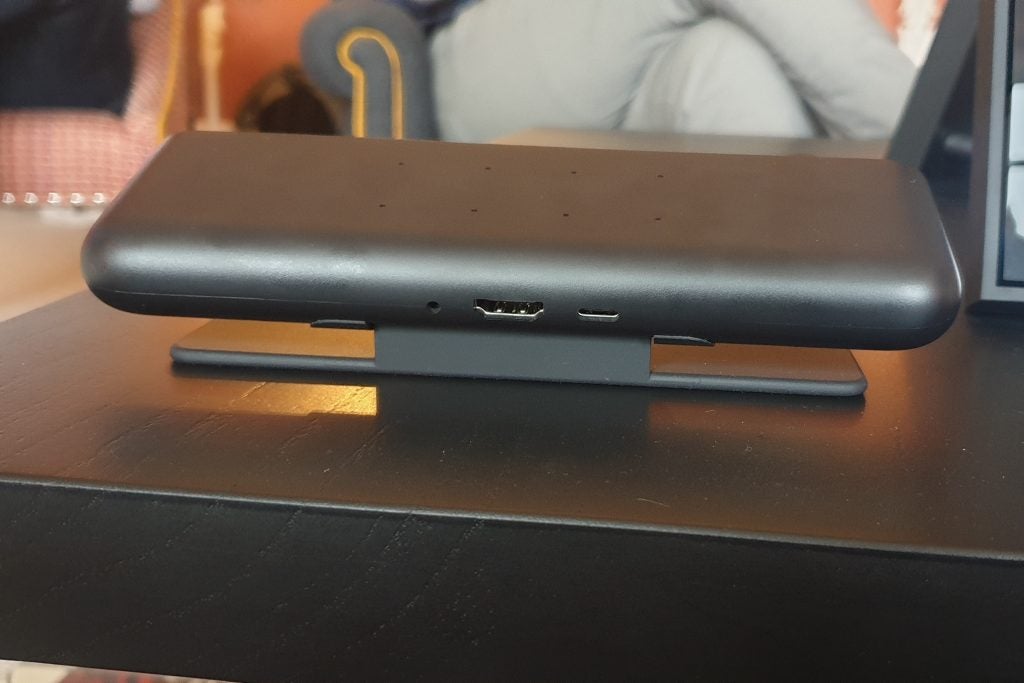 Setup seems to be simple, requiring you to hook it up to power and TV, while connecting to your router via Wi-Fi

Portal TV isn’t just a standard webcam for your TV, however; it’s packed full of fascinating technology. The most impressive was its tracking feature, enabling the camera to keep you in shot while you move around your living room, a similar trick to the camera on the Google Nest Hub Max. The Portal TV can also uses this focus to adjust the microphone sensitivity, so you never need to shout across the room in order to be heard.

And if you think such tracking features would become confused by multiple people in a room, this isn’t the case. It can shift to a wide-angle view if two people are sitting far apart and track both persons simultaneously if they’re on the move. What happens if there’s an energetic toddler sprinting around the room and disrupting the tracking sensors? Not a problem – simply select individual people for the camera to focus on.

There are some super-cool software touches here, too, with Portal TV supporting AR features such as those you’d find on Snapchat and Instagram, where you can give yourself a cartoon hat or wacky sunglasses. 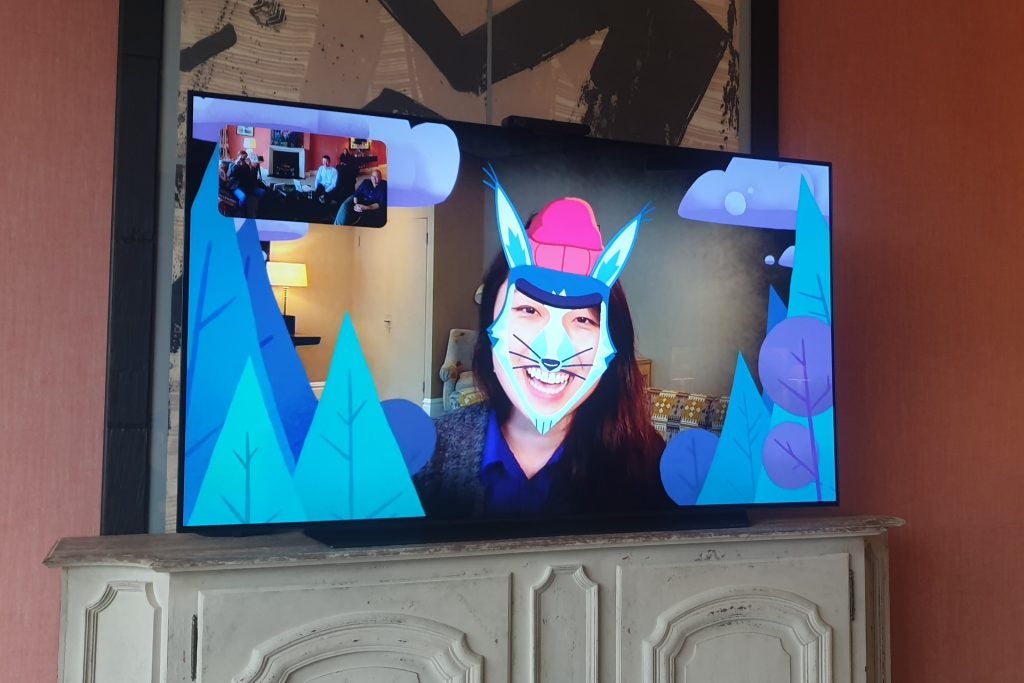 Facebook takes it one step further with the Story Time feature, which is great for interacting with your children if you’re away on a business trip. Once activated, it will display the words to the story on your screen so you can recite it to the younglings. The feed your children are viewing will feature lots of story-themed AR animations that decorate the display for a more interactive and engrossing experience.

This is a superb addition and shows a great understanding of parents who find it hard to keep a child entertained on the phone. Any parent who’s frequently travelling or lives long-distance will no doubt find this immeasurably useful.

Facebook also confirmed there are may adult-centric features on offer, including games and support for existing apps. Most notable is the partnership with Amazon: you’ll be able to watch Prime Video content with a friend while on a video call, or get some karaoke started with on-screen lyrics appearing with all your favourite songs via Prime Music.

The Facebook staff hinted that app integration will only increase in the future, and that they’re open to customer feedback in the form of improving existing features and ideas for new ones. Portal TV certainly has the potential. 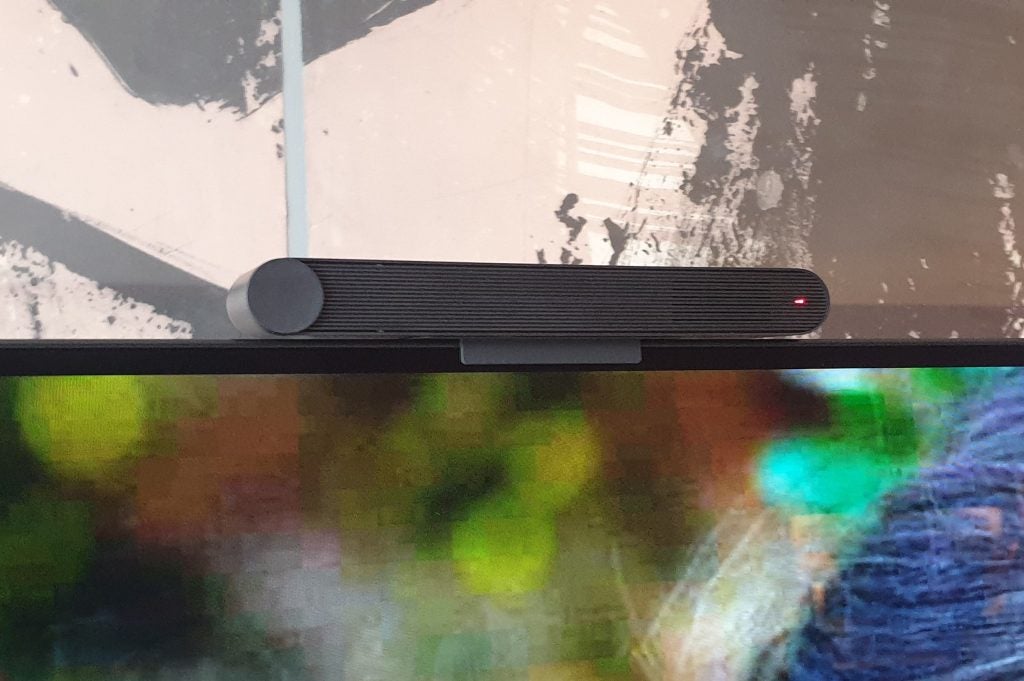 Let’s address the elephant in the room: privacy. Putting an all-seeing, all-hearing device in your living room from the company at the heart of the Cambridge Analytica data scandal sounds like a privacy nightmare waiting to happen.

Facebook was quick to address privacy concerns reassuringly. A slider is built into the device that can snap into place to cover the camera when you’re not using Portal TV. If this isn’t enough, Facebook has also included a switch you can toggle off to disable both the microphone and camera, with a red light alerting you to its power status.

On the support page, Facebook clarifies it won’t “listen to, view, or keep the contents of your Portal video calls”, while every video call is encrypted. What’s more, the AI technology from Smart Camera runs locally on Portal, not on Facebook servers. Portal also doesn’t use facial recognition, so any concerns for personal privacy can be eased.

Of course, these are all Facebook’s own promises, and it’s up to you to trust the company if you do end up buying one of the Portal devices. At the very least, I’m pleased with how Facebook is putting measures in place to be privacy-conscious with its new lineup of Portal devices.

Is Portal TV going to be as successful as traditional smart home speakers at invading homes, proving yet another Back to the Future prediction to be accurate? I’m not convinced. There’s little need for big-screen video chats, with tablets, laptops and smartphones already providing a perfectly capable and – arguably –more convenient experience.

I expect there to be appeal for those who are frequently away from families on business trips, or for anyone wanting to see multiple people in one feed – but that’s a niche demand, especially at the £149 price.

We’ll have the Portal TV in for testing in the near future, so stay tuned for our final impressions and full verdict.