The Facebook Portal is a good device for family members who want to stay in touch, as well as Facebook video-chatting die-hards – but it doesn’t have much to offer outside of those walls. The camera tech is impressive and the new design is a winner, but this smart display is quite limited and the competition is far better.

Landing in 2018, it came during an especially rough year for the company, which was dealing with a myriad of privacy problems including the Cambridge Analytica debacle. Sure, the Portal had some cool tricks, but with trust in the company at an all-time low, did you really want to put a Facebook camera in your home?

The new Portal makes some strides forward – it looks better and it now supports WhatsApp video calling (though the latter is also available on the early devices) – but the core purpose remains the same: video calling. If you’re not much of a Facebook or Facebook Messenger user, you may as well close the page now: this really isn’t a product for you.

If you are, Portal opens up some interesting and convenient ways to communicate with friends and family. It also now comes with two different names: Portal and Portal Mini. We’ve been living with the larger of the pair for a few weeks now.

Facebook Portal Design and Installation – Pretty as a picture

The first Portal designs were… kinda weird. The original wedged-shaped Portal looked a bit like an Echo Show, while the Portal Plus (which Facebook is keeping available FYI) was like a PC with a rotating screen: something you’d more likely see in an office. And Facebook certainly sees a place for Portal in the workplace (the Plus still has a wider field of view, and all support Facebook Workplace, the company’s team collaboration software).

This time, both Portals take their design cues from digital photo frames. The regular Portal (£119) has a 10-inch screen and the Portal Mini has an 8-inch display (£79). Both come in a choice of white or black frames and, beyond size differences, they’re the exact same device. Privacy fans will be glad to see that there’s a switch to turn off the webcam when not in use. 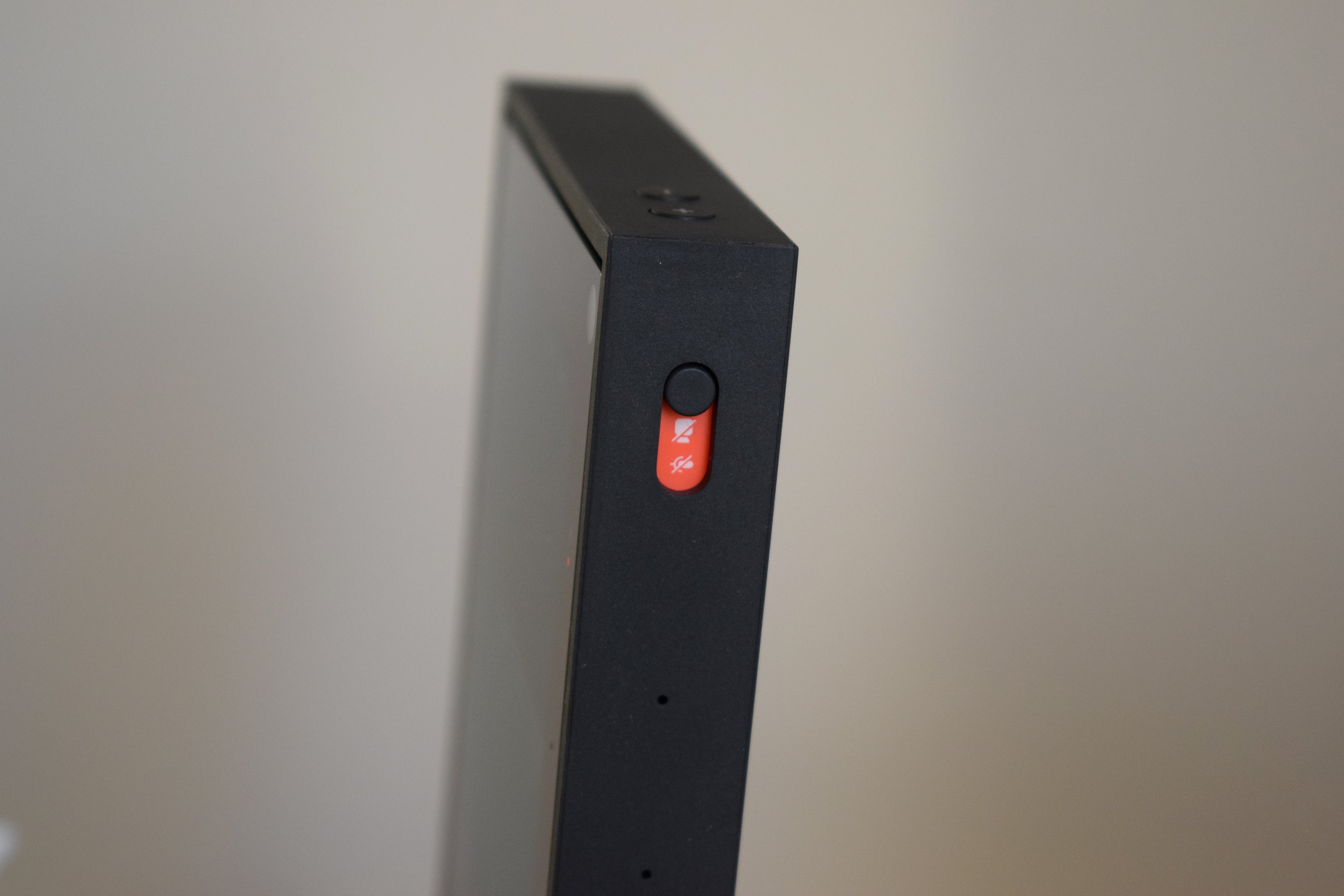 The new design is a vast improvement over the original and makes the Portal feel less like a piece of technology. When it’s not being used, the Portal will display stock images or photos from your Facebook and Instagram accounts, but only if you grant it access.

Facebook’s adaptive brightness screen tech isn’t as good as the one in Google’s Nest displays, but it does a competent job of preventing the screen from being a distraction at any time during the day or night.

On the back is a tubular kickstand that can prop up the Portal vertically or horizontally. The power wire also feeds through this, which helps keep it somewhat under control. The ability to have the Portal horizontally or vertically is a new feature unless you owned the screen-spinning Plus. If the person on the other end of the video call is using their smartphone, there’s a good chance they’re holding it vertically, so being able to prop the Portal in the same way means the call screen will fill the display. 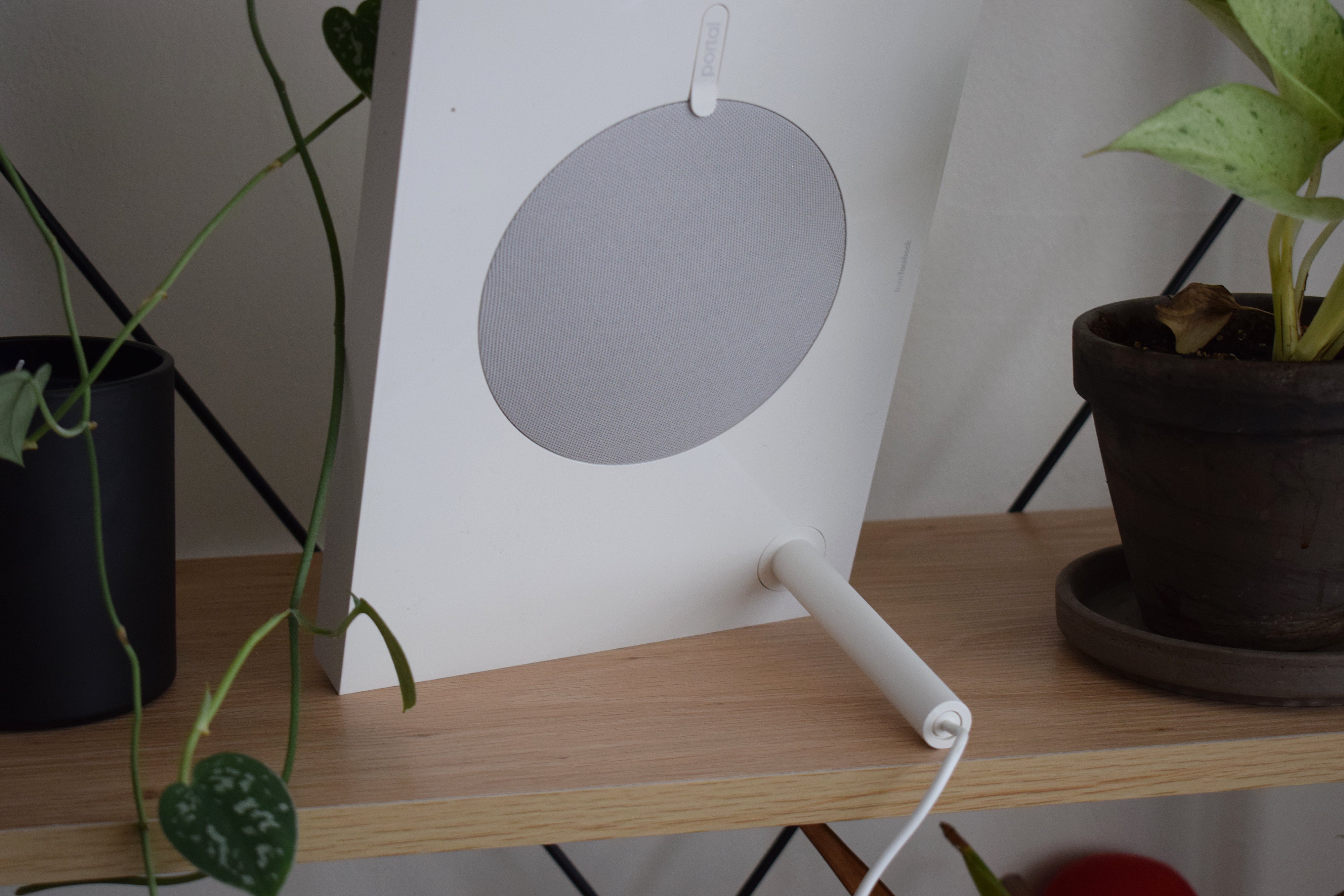 It’s nice to see a bit of cable management

There is a Portal app, but you don’t actually need to download it to use Portal. Doing so will let you create and add photo albums, as well as set favourites, but you don’t have to do this. When you set up Portal, you’ll need to log into your Facebook account, which you’ll do using a browser link, and from there you can get the full functionality of video calling without the app at all. 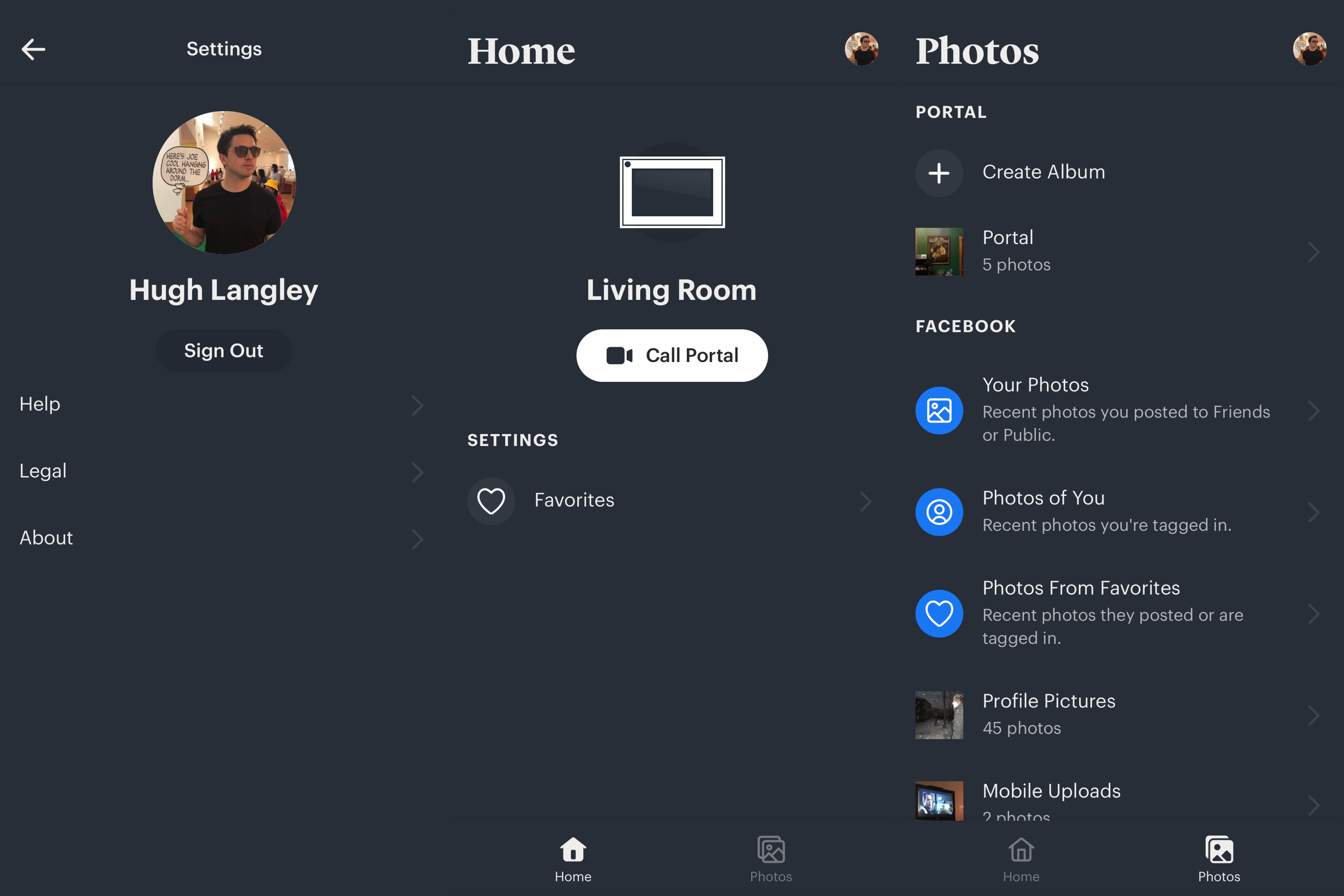 The Portal is primarily a video calling device, but you now have the option of WhatsApp as well as Facebook Messenger. Of course, this means that if you’re not a big Facebook user, or a Facebook user at all, Portal is not for you.

I feel like Portal is still a gadget for the Facebook die-hards, but while I don’t consider myself to be one of those, I have found the convenience of Portal strangely compelling. Thankfully, the fact this is essentially the Messenger app in a different vessel means you can have calls between Portal devices and smartphones, as well as Portal-to-Portal calls.

You can start a call to anyone in your Messenger friends list by saying, “Hey Portal, call Laura.” Yes, Portal has its own assistant, but it’s only for on-device tasks like calling people or opening apps. For everything else, there’s Alexa, and thanks to Facebook using of Amazon’s Smart Screen SDK, can display information as well as talk. Handy for checking the weather forecast, cinema showtimes etc.

But back to the calling. WhatsApp has now joined the party, although you can only initiate a WhatsApp video call using the touchscreen, a limitation due to Facebook keeping all WhatsApp info on-device (using the assistant would require sharing contact information with the cloud, and Facebook clearly doesn’t want to destroy WhatsApp’s secure brand).

There’s another limitation to WhatsApp: you have to have the WhatsApp app open or running in the background on your phone. I discovered this limitation when I tried to make a WhatsApp call only for Portal to tell me my phone battery was too low (it was admittedly at 2%, but until this point, I didn’t think that would matter).

Beyond calling, Portal comes with a few other apps including Spotify. The audio quality on Portal isn’t great and, as I previously mentioned, feels more finely tuned for voice over music. But it’s fine, and there’s a cool feature where you can share a track with other callers. Facebook Watch is here too, but no other video apps right now. Amazon Prime Video was promised for this year, but has yet to materialize, and there’s no sign yet of Netflix, HBO or others. The lack of YouTube is probably the biggest shame, and although you can go through the web browser (yes there is a browser), it’s an awkward experience. In fact, the browser experience as a whole is pretty useless.

Calls quality on both Messenger and WhatsApp is really good. Everyone I’ve chatted with said the audio was perfectly clear, even when I stood far across the room – and they too have always sounded great on the Portal’s speakers, which are tuned more for voice and less for music.

The Portal’s best feature is still the camera, which tracks you around the room, although Google has now copied this in the Google Nest Hub Max. While on a call the Portal will pan and scan to keep you in shot. It means you can walk around the room, go about your chores and keep chatting safe in the knowledge the other person can still see you – within reason. The 114-degree field of view is less than the Portal Plus’s, but combined with the tracking tech, it allows plenty of leeway. 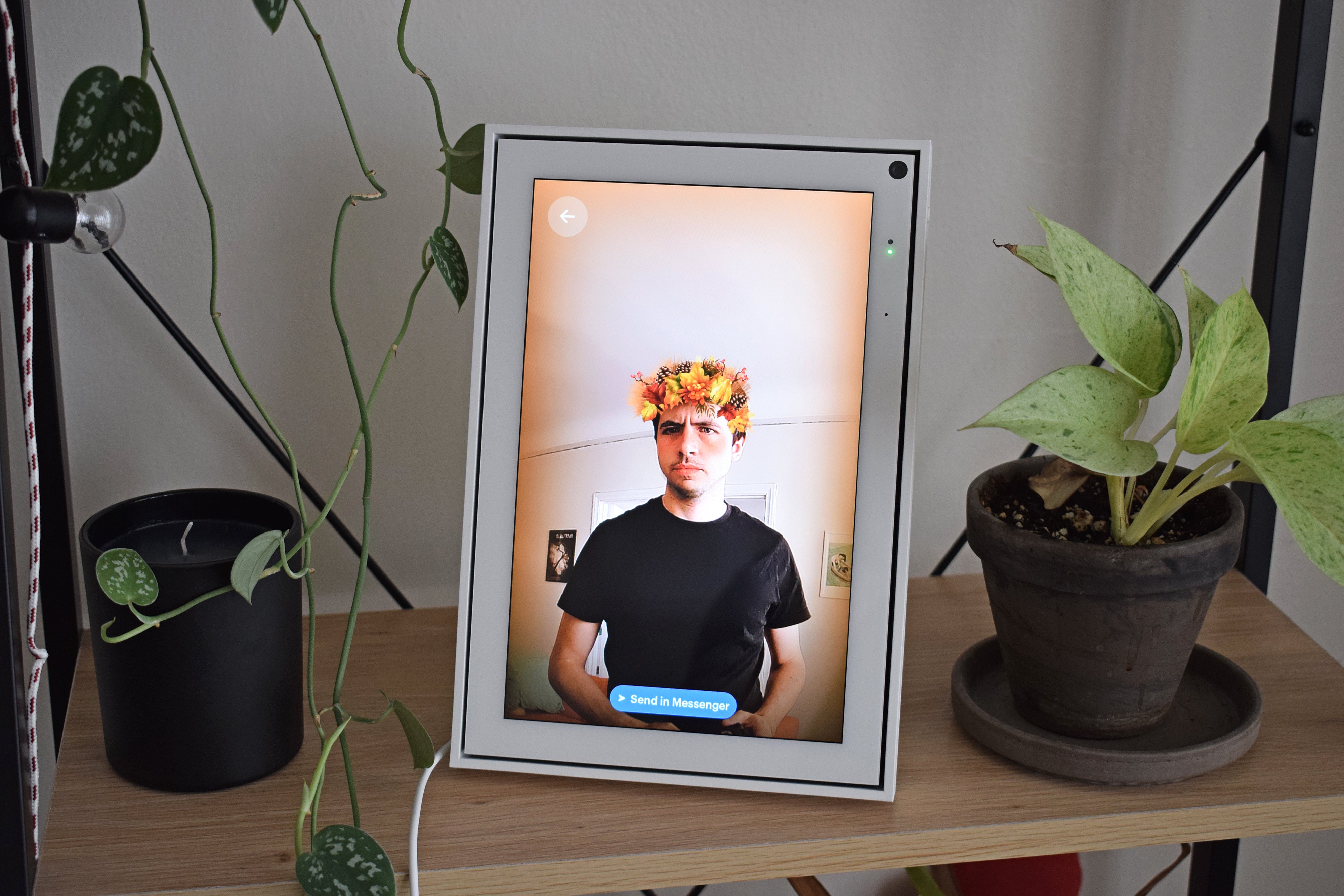 Camera tracking is neat and keeps you in the frame

You can have a maximum of eight people on a Messenger call, and up to four with WhatsApp. Considering FaceTime supports 32 participants, it would be nice to see Facebook pump that up a bit, but unless you’re planning on launching a video conference with one of your massive WhatsApp groups (and I have no idea why you’d want to invite that chaos into your life), you’re probably not going to bump up against the limit.

After using Portal for a few weeks, the best way I can describe it is as a hang-out device. It takes the rigidity out of video calling, letting the camera adapt to you rather than the other way around. It’s the sort of thing I’d love to see Apple do for FaceTime one day, but that’s because I use FaceTime calling way more than I video chat with Messenger or WhatsApp. On the other hand, almost all of my friends and family are on Facebook, and there’s something so satisfying by just saying, “Hey Portal, call so-and-so” and have it work so seamlessly.

This is a hard one. For the first Portal, I’d have almost certainly said no, but the new one has done more to win me over. Despite the convenience it brings to video calling, this is still a gadget primarily for people who video chat over Facebook Messenger or WhatsApp a lot. It’s also missing a lot of features that would help round it out into something that could compete with the Echo Show or Google Nest Hub.