In less than 10 years, Facebook has gone from a geek’s bedroom project to the most populated online community in the world. Yet, the way we use it hasn’t changed much in the last few years.

Facebook Home is the biggest revolution in the Facebook user experience since the mobile app launched in 2009. However, it has a way to go before becoming good enough to warrant using it day-to-day.

You download Facebook Home for Android as you would any other app. It’s currently available from the Google Play app store and is compatible with a small selection of top-end phones, including the Samsung Galaxy S3 and HTC One.

However, it’s not a simple app in the manner of the official Facebook app. This is a Launcher app.

It’s far from the first – Android Launchers have been available since the platform’s early years – but is the most high-profile one to date. Launchers replace the default user interface of your phone. They’re parasitic entities that transform what your phone is like to use entirely. 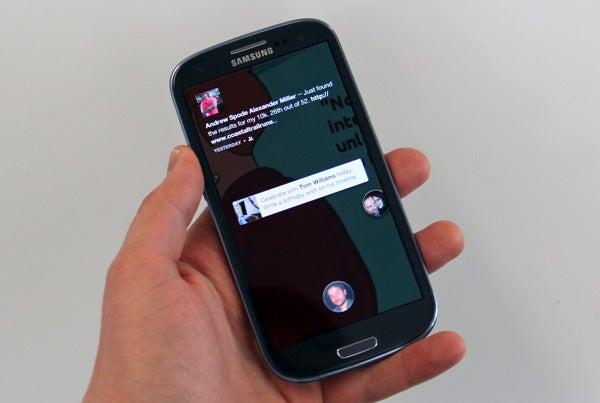 The aim here is to centre your phone on your Facebook news feed. As soon as you take the phone out sleep, you’re treated to a recent Facebook update from a friend, arranged to fill the screen.

Flick left and right and you’re taken between recent statuses, each taking up a page. This is both your lock screen and your home screen – and it’s called Cover Feed.

Text statuses are formatted to fit the screen, and if there’s a picture tagged, it becomes the screen’s background. If there’s no picture, Facebook Home plasters the person’s cover photo across the display. 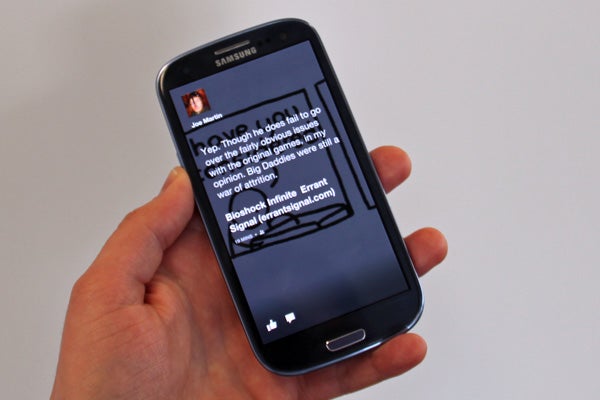 What Facebook Home gets right is how flicking through these status pages feels. It uses a physics engine to give the movement of every element in the app the fluid motion that is core to the modern smartphone experience. Take the wibbly-wobbly out of transitions within apps and they feel dated and clunky.

There are issues, though. For the Facebook-obsessed – who this app is aimed at – Cover Feed is RSI-inducing in its inefficiency compared to the standard Facebook app. And many of the pictures look pretty awful on a large, high resolution screen like the Galaxy S3’s.

Pictures are viewed as zoomed-in, moving objects in CoverFeed until you press down on them to see the full image. Internet images, in all their low-resolution glory, are often hideous, only partly offset by the liveliness of Facebook Home’s constantly-moving images. 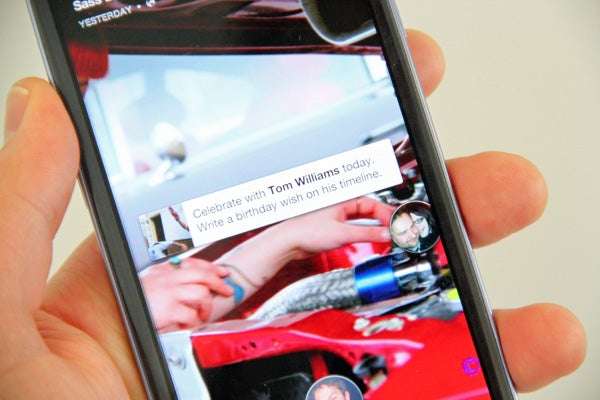 Plus, giving each status such screen real estate makes avoiding those nonsense-spouting folk we all have on our Facebook feed that bit harder to ignore, without blocking them entirely.

Cover Feed is not everything in Facebook, though. Down at the bottom of the screen you’ll see a little round version of your Facebook profile picture. This is Facebook Home’s nav button.

Press it and three other buttons sprout out. These take you to your apps drawer, Facebook Messenger and the last app you used. 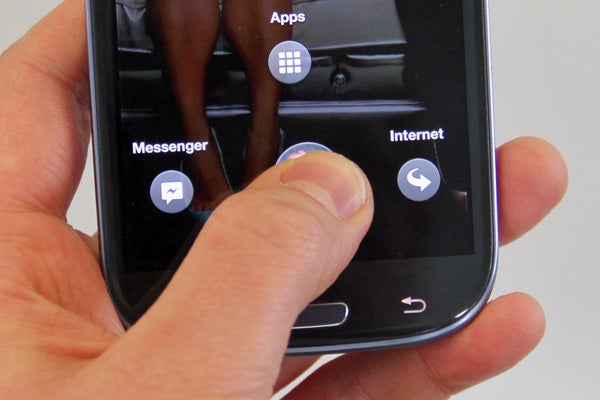 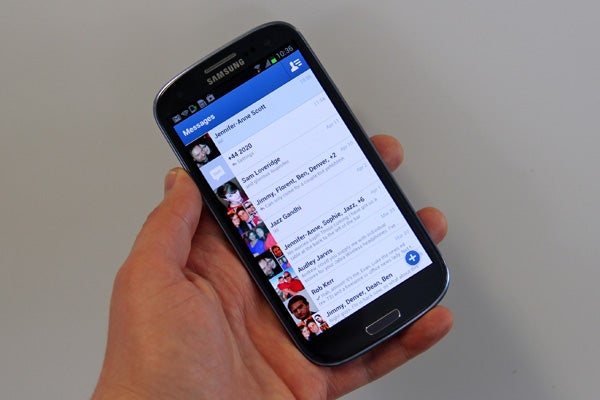 What’s doubly confusing is that Facebook Home also incorporates an early version of a new chat interface, what Facebook calls Chat Heads. Hold a finger down on a person in the Messenger area and an option to create a Chat Head of this conversation will appear. 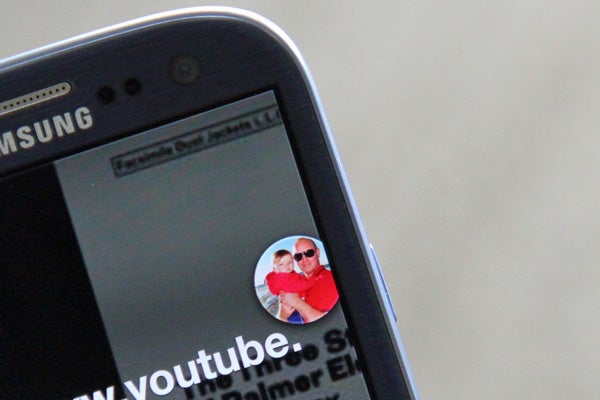 Chat Heads are little shortcut circles that stay on top of your phone as an overlay, whether you’re on Cover Feed or using an app or game. The idea is that you can carry on conversations no matter what you are doing. Chat Heads stack on top of one another, to avoid your phone becoming littered with little chat baubles.

Tap on the Chat Head and the new-design chat interface pops up, showing any current Chat Head conversations as shortcuts up at the top of the screen. 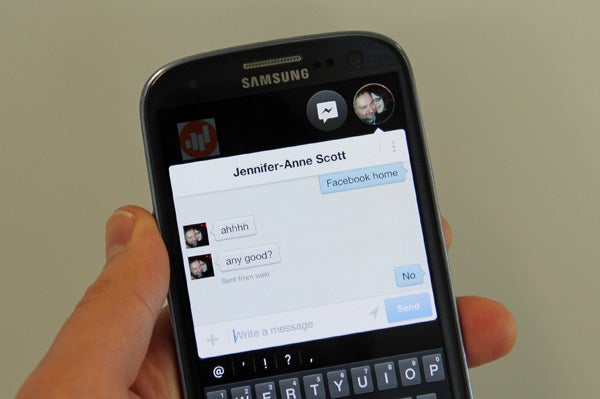 That this chat interface is sleek and pretty while the Messenger section is dated and ugly is an example of why Facebook Home feels disjointed in parts. And ultimately, it’s too prescriptive and limited to be much more than an interesting curiosity at present.

Taking away any form of customisation, including widgets, Facebook Home robs Android of what many people love about the platform. However, Facebook says that such features were left out because early development was focused on nailing the fluidity of the UI, rather than packing-in features. 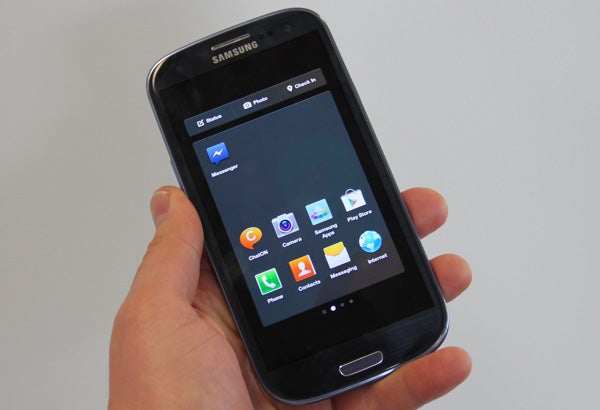 Some design decisions feel odd too. Much as there are many narcissists on Facebook, do you really want the button you press dozens of times a day to be a little picture of yourself?

Facebook Home feels like a beta, because it is one. Not only is Facebook Home compatibility severely restricted at present, it is disjointed and feels claustrophobic compared with the best Android interfaces. It’s worth keeping an eye on, though.