Let’s get this straight from the off. If you played Fable on Xbox, zipped through it in under ten hours and felt horribly disappointed, The Lost Chapters isn’t going to swing your opinion around. If you poured scorn on Lionhead’s flawed-but-adored RPG, compared it unfavourably to Zelda, or wrote abusive posts on message boards because the trees in the forest didn’t grow and age as promised, then you’re still going to moan about what’s missing from the PC version. Some people just don’t get Fable, and I must admit they’re not entirely wrong. The core gameplay is surprisingly simplistic, it still isn’t an epic in the Final Fantasy league, and some of its most-lauded features are, when it comes down to it, really quite superficial. This is as true of The Lost Chapters as it was of the original release. 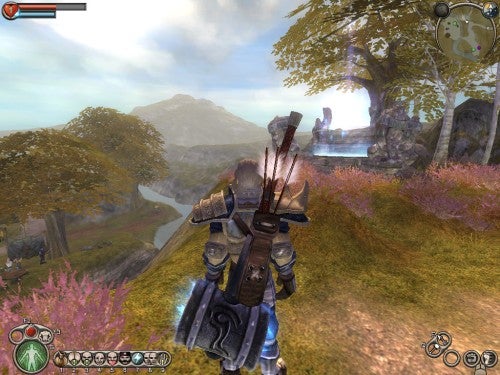 That said, I think it’s a wonderful game.


You see, what you get out of Fable depends heavily on what you put in. The Lost Chapters adds content – new side-quests, missions, items, monsters, styles, expressions and a whole new region – but if you just start playing and blaze through the central story then you’re really missing the point. It’s a little like going to Rome and storming around the main sites in three days, when anyone sensible would take a week, chill out, and just spend some time eating ice creams, walking the streets and soaking up the culture. If you rush Fable, you’re going to be slightly disappointed. 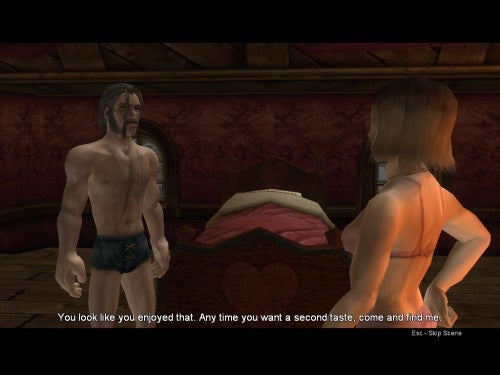 Peter Molyneux has always talked about Fable in terms of a game that makes you feel like a hero, and that means more than just the monster-killing, dungeon-looting action of a typical RPG. It means doing great deeds, building enormous muscles, spending time in the taverns striking poses to adoring wenches. It means getting a great haircut, putting on a shiny suit of armour and getting a manly tattoo on your chest. It might mean buying a house or finding a wife, exposing the dark secrets of a harsh regime or just spreading a little love throughout the world. Or, if you have a sinister bent, it might mean shaving your head, growing a long beard and rocking the Ming the Merciless look, dragging innocents off to a macabre temple to be sacrificed, killing traders and guards or just getting drunk and throwing your weight around.

Whatever you do – whatever you decide to be – there’s always some reward. Build a reputation as a great hero and you’ll be applauded everywhere you go. Women (and sometimes men!) will swoon at your feet, and you’ll be greeted with affection by all and sundry. Take the villainous route, and kids will run every time you appear, villagers will drop what they’re carry and cower and, well the women will still swoon at your feet provided you haven’t got too many disfiguring tattoos. 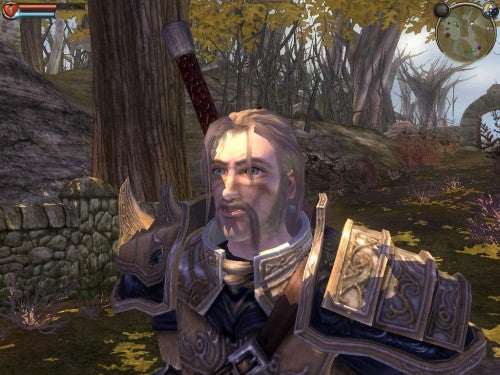 And that’s not all. Pair a pudding-basin haircut with mutton-chop sideboards and kids will laugh at you in the street. Eat or drink to excess and you’ll develop a weight problem and the booze will take its toll. Your character is entirely up to you.


Admittedly, this ‘have it your way’ stuff only goes so far. The core of the game is a series of primarily combat-driven quests. There is some pretence of variety – you may be guarding merchants, rescuing hostages from bandits or fighting waves of monsters in a grand arena – but you’ll always find yourself trying for head shots with your trusty bow, wielding a sword, axe, mace or hammer against the varmints, or letting loose with fire and lightning from your sorcerous finger-tips. 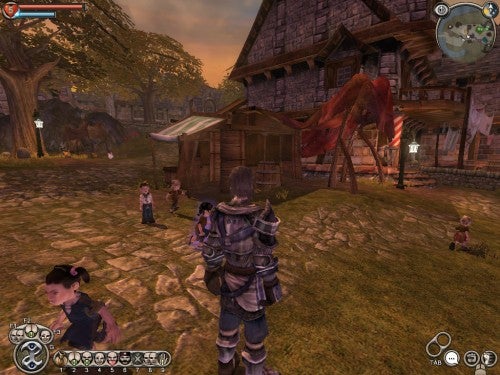 In this respect, it mostly doesn’t matter whether you’re a budding Sir Galahad or a wannabe Darth Vader; there’s only one way to do the mission, and if you don’t complete the goals then you’ll fail. There are some clearly nasty missions, and at times the game gives you a clear option to take the path of good or the path of evil, but there’s no chance of, say, deciding on a whim to join the bandits and rescue their trapped leader. In this respect, Bioware’s Star Wars: Knights of the Old Republic games are comfortably ahead of Fable in the ‘choose your own morality’ stakes.

All the same, only a few games – the aforementioned Bioware games plus Jade Empire, the GTA trilogy, Ultima Underworld, The Elder Scrolls: Morrowind – have succeeded in created a world this stunning and vibrant, then really making you feel part of it. It’s not a huge world, but it is a truly beautiful one; more reminiscent of European folk-tale than the standard sub-Tolkien mush. There’s plenty of green woodlands, dark forests and pungent marshes in the early portions, with a scattering of mountain, ice and snow – including an all-new Northern region – to come later on. 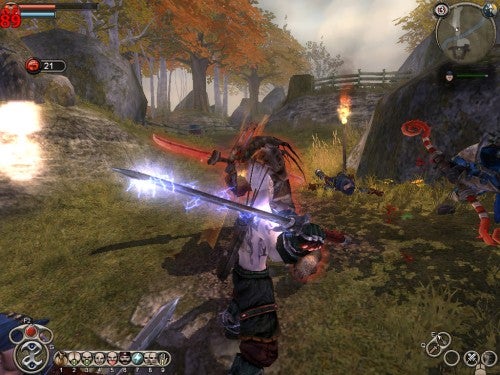 Like World of Warcraft, it’s all bound together by a coherent, imaginative art design, with gorgeous scenery, detailed houses and dilapidated ruins everywhere you look, plus generous lashings of golden sunlight and mist-drenched atmosphere. Characters and monsters look superb – even if a few more types of villager and trader would be welcome – and this has to be one of the most attractive RPGs we’ve seen yet. And while the irreverant quips and regional British accents might put off the more po-faced fantasy gamer, they help make it one of the most downright entertaining ones to boot.


Plus, of all the games mentioned above, Fable is easily the most accessible to a mainstream audience. Not enough has been said about how cleverly the team at Lionhead were in taking the RPG from its hardcore, stat-driven roots and changing it to something that everyone would like to play. 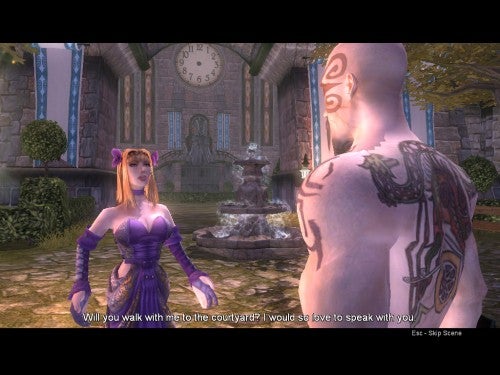 You don’t need to learn complex combat or magic systems, spend hours managing your inventory or work through screens assigning experience points. You can see your character get stronger, blast a fireball or use a health potion at a touch of a button, and aim your bow for a head shot in the easiest and most logical way possible. You don’t even need to spend hours wandering huge distances once you get used to the game’s effective teleport network. Yes, it’s dumbing down, but it’s dumbing down in a clever way. And with a mouse for precision aiming and the keyboard shortcuts of the PC, Fable actually works even better than it did in the original Xbox version.

In fact, overall this feels like a bigger, more complete and more satisfying game. The new missions and side-quests are neatly woven in throughout – though the Northern Wastes don’t become accessible until later – and there’s a changed, meatier finale waiting for you at the end of the game. Oh, and there’s now a Bordello hidden somewhere, if you want to add another vice to wanton drunkenness. 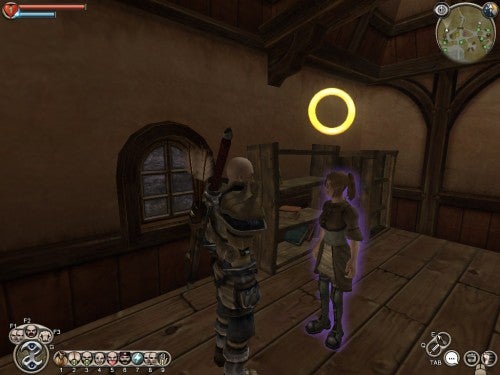 We’re still not talking thirty hours plus of solid gameplay, but if you make the most of it you won’t find it falls short. Take your time. If you do, you’ll find this is so much more than the simple action RPG it first appears. You see, no matter how much I think about the drawbacks – the odd badly-designed monster encounter, some flaws in the target lock-on system – I can’t help thinking about all the bits that make me smile, made me think, or even made me laugh out loud. I look down at my notes, and there really are an awful lot of them. My head says 8, my heart says 10. I’d better rate it somewhere in the middle….


This still isn’t quite the Fable Peter Molyneux originally promised, but strip away the wreckage of the hype and disappointment and there’s a shining jewel of a game inside. 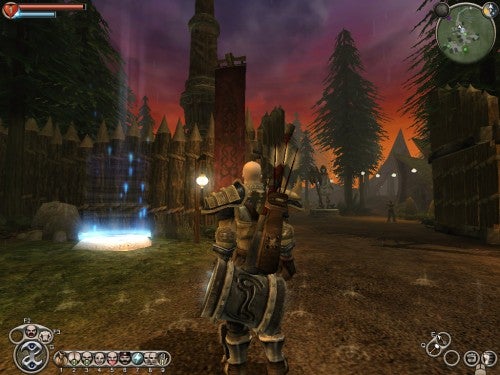