Available to download on Xbox Live Arcade
In a way, Fable Heroes is everything you might expect it to be: a cheerful cartoon hack-and-slash action game that uses favourite Fable characters and settings, and with the emphasis on simple, family-friendly fun. With its bright and breezy cel-shaded graphics it looks a bit like Legend of Zelda: The Wind Waker, Dragon Quest IX or Sly Racoon, and it plays a bit like an action-RPG, only with most of the RPG elements pulled out. 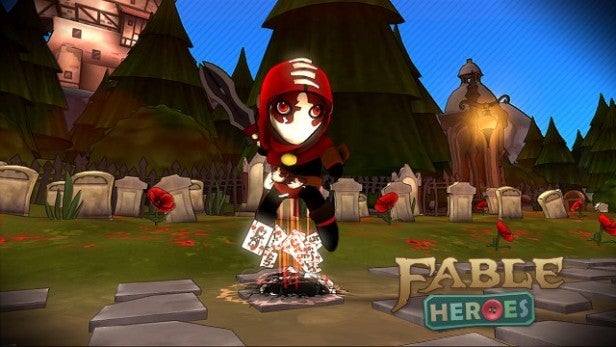 There’s no real storyline as such, only a series of levels that take your across the breadth of Albion battling monsters and collecting treasure. The levels follow linear paths until the final section, where they branch to give players a choice of conclusion, and each is basically a sequence of battles culminating in a boss battle or a mini-game. Combat is deliberately simple.

Each of your characters, or Puppets in the game’s puppet-show conceit, has either a melee attack or ranged attack (though a few have both). Pressing the X button whacks out with a fast shot or blow, pressing and releasing Y charges up a more powerful version of the same, while pressing the right-trigger unleashes some kind of attack that affects your immediate area – handy when you find yourselves surrounded by foes. 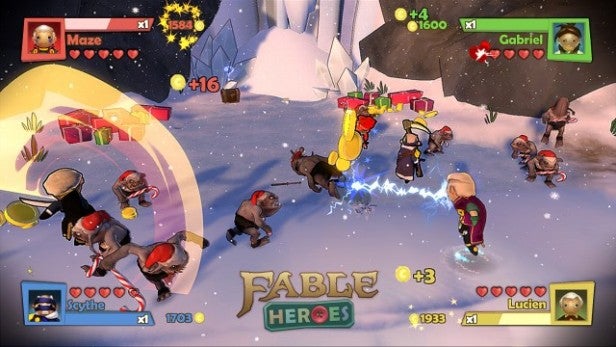 All for fun, fun for all
Up to four players, either in the same room or playing over Xbox Live Arcade, can play at once, and empty seats will be occupied by AI heroes, who do a reasonable job of swatting monsters and hovering up the loot they release should human players prove tardy in doing so. At the end of the level, the gold is totted up, players get placed on a podium (or face the mocking sad trombone), and it’s off to the game’s weird upgrade boardgame. 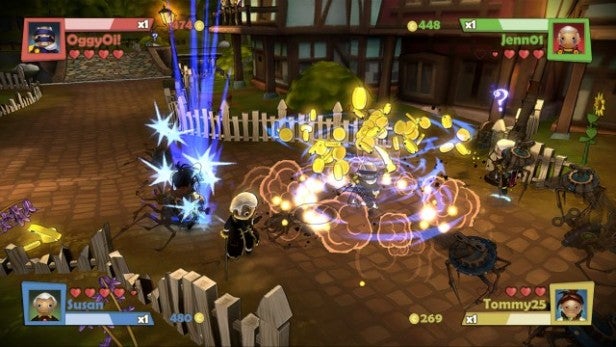 Here players throw a dice to move so many spaces, then cash in their gold to unlock upgrades from the square they land on. There are general damage boosts, boosts against specific monsters, movement and attack speed boosts and a range of others. There are also cosmetic upgrades that give you bigger weapons, cool weapon trails and new expressions you can give your characters with a tap of a bumper. It’s an interesting twist on the more traditional weapons, armour and experience-based levelling systems, and one that ensures that nobody is pausing the action in the middle of a game to fiddle with their inventory or change their current perks.

Having spent around an hour to ninety minutes working your way through the basic set of levels, you unlock a final credits level and Dark Albion; a revised set of the original levels with different lighting, different enemies and a ramped-up difficulty level. And if your hunger for more Fable Heroes isn’t sated by then, there are online leaderboards, secrets and unlockable characters to keep you busy.

The bad news is that most people will be a little tired with Fable Heroes by that point. In fact, there’s a chance that you might be sick of it. Don’t get us wrong: Fable Heroes is fun for a while. It’s very easy to pick up and play, and a little of the Fable feel comes through in the locations, the eccentric collection of non-standard monsters and the use of good and evil chests, the one delivering a perk to a random hero, the other delivering a nastier surprise. Some of the mini games are fun, with monster-bashing challenges and races that will have you hammering the buttons Track and Field-style. Most of all, it’s a game that thrives in multiplayer, with that classic mix of cooperation and competition as you scramble for gold or chuckle evilly as your friend/rival gets hit by the Small Hero power-down in the middle of a battle. It’s even better if those other players are kids, and it works best as a family game. 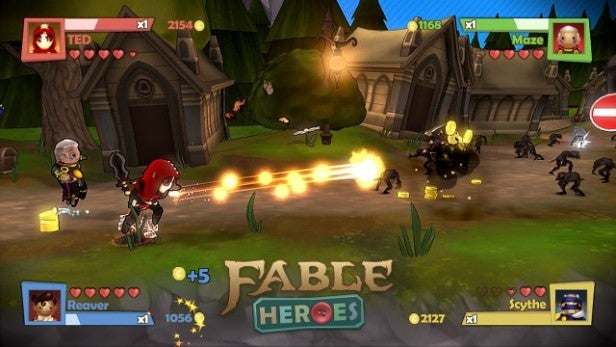 Too Simple?
But Fable Heroes is undeniably slight. The combat lacks interest. The boss battles are tedious. The upgrades aren’t exciting enough to keep you playing long-term. There are none of the fun cooperative puzzles that make a Lego Pirates of the Caribbean or Disney Universe so entertaining, and no features that really encourage cooperative play. Arguably the most interesting thing about Fable Heroes is that loot can be transferred to the Kinect-ready Fable: The Journey when that launches, and that certain characters can only be unlocked through playing that game. The more time you put into Fable Heroes – and we’re talking minutes rather than hours – the more it all starts to get slightly dull. 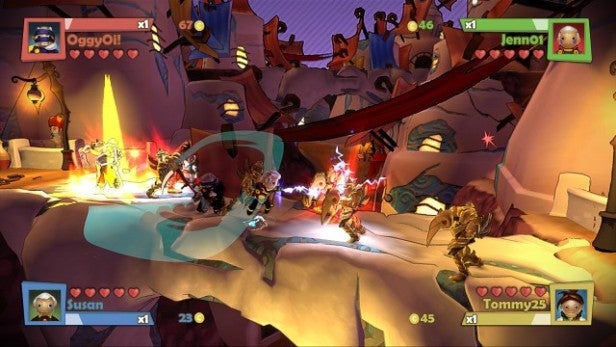 Now, we can forgive this a little when the game costs just 800 MS Points (or around £7) but the problem Lionhead faces here is that we’re getting spoilt by Xbox Live Arcade. 800 MS Points can also buy you Fez – one of the year’s most startling and imaginative games – or The Splatters, or two episodes of The Walking Dead. Whack the budget up to 1200 MS Points (or roughly £10) and you’re looking at Trials Evolution or Alan Wake: American Nightmare. Any of these choices will give you more entertainment than Fable Heroes. This is a shame, because there are some nice ideas here and there’s no reason why a family-friendly hack-and-slash RPG shouldn’t work. As it is, though, Fable Heroes is a bit of a disappointment: a game that eventually feels about 50 per cent less brilliant than it looks.

Verdict
Fun in the short-term but ultimately forgettable. Play it with friends or younger family members and you’re in for a couple of hours of cartoon hack-and-slash entertainment, but there’s just not enough meat in the gameplay to hold your interest for long.