The big challenge for any sports game with an annual update like Codemasters’ F1 2013 is how to keep the series fresh. There are only so many tweaks you can make, so many modes or features you can add, before you have to radically overhaul the graphics or the gameplay; something that’s not easy at this point in the console lifecycle.

F1 2013 has its share of tweaks and new features, but like many great sports series before it – FIFA, NBA and Fight Night come instantly to mind – it’s looking back to the past in order to move into the future. While F1 2013 is a better game all-round than F1 2012, the improvements are mainly in the detail. Instead, its killer feature is a Classics mode, taking us back to the glory days of the eighties and nineties with vintage cars, vintage tracks and vintage drivers. 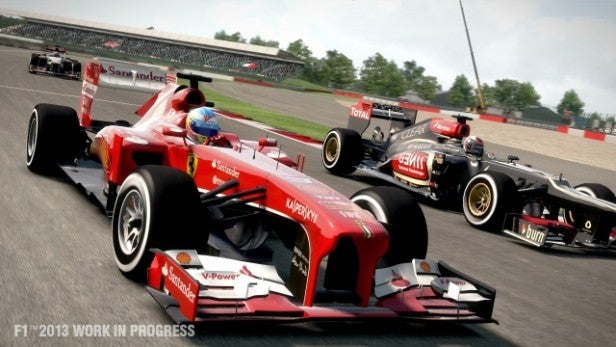 This is a great move at a time when films like Senna and Rush have revitalised interest in F1 history, but we need to keep a lid on expectations. F1 Classics mode is not, as some have suggested, a game in its own right. With the F1 2013 standard edition you get two classic tracks – Jerez and Brands Hatch – with five 1980s cars and ten drivers.

Stump up £10 more for the F1 2013 Classic Edition and you get two more tracks – Imola and Estoril – plus six nineties cars and matching drivers. If you don’t buy the F1 2013 Classic Edition now, you can upgrade later with DLC. There’s no Classics career mode, no Ayrton Senna and no McLaren MP4, just the individual Grand Prix events, some time trials and a series of historical scenarios. 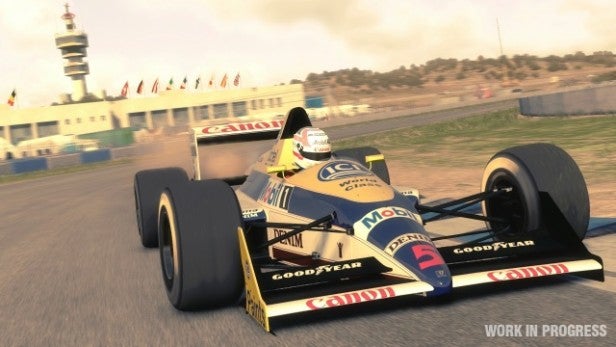 There’s a sense that anything could happen, and that any mistake you make could be disastrous. You can’t rely on KERS or DRS to increase your lead or catch up with the pack, and even the look of the cars is that little bit more low-tech, particularly in the cockpit views. For F1 fans of a certain age, F1 Classics mode will be sweet nectar. 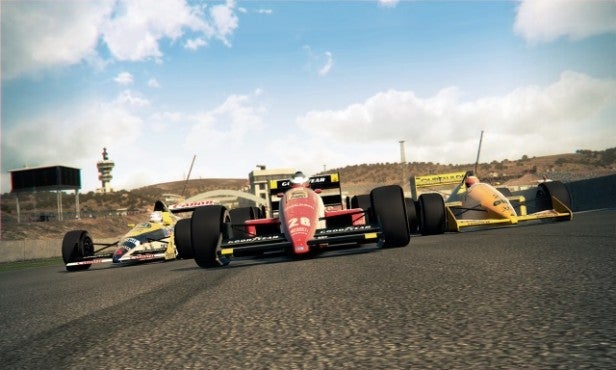 But what about the rest? Well, some might say that F1 2013’s single-player modes are a little bit lacking in drama, but we’d say there’s something for just about everyone. If you’re new to the F1 2013 series, there’s a Young Drivers Test mode that takes you through the basics of braking and steering and how and when to use KERS and DRS. If you want more of a quickfire arcade game, then the Season Challenge and Scenarios modes work perfectly.

The former gives you a focused, ten race F1 season with shorter sessions and objectives based around rivalries with other drivers – you can pick your rivals to give yourself a fighting chance. The latter gives you scenarios based on different stages of a driver’s career, asking you to beat a team-mate from a poor starting position, or pull ahead of a specific driver.

These modes still give you a decent stretch with plenty of challenge, but without the more intense time commitments of the proper career mode. But if you want a full career mode, then you’ve got it. You can choose a team, race through the whole season, and take part in full practice, qualifying and racing sessions, or trim them down to suit your style. 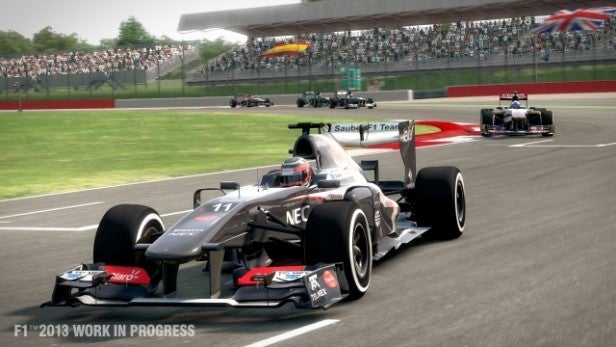 There is multiplayer, of course, but at the time of writing we haven’t been able to try it. From what we can gather it’s not vastly different from last year’s model, but if that turns out not to be the case, we’ll let you know.


In terms of the modern racing experience, F1 2013 is more about refinements than major changes. The handling seems that little tighter and the combination of sound, rumble feedback and motion blur effects makes for a more visceral racer; one that does a great job of communicating the velocity and split-second timing of F1, particularly – once again – in the cockpit views.

You can finally save mid-session, which makes the career mode a little more accessible too. If we have anything to moan about, it’s that the AI can be extremely aggressive, and that it’s hugely frustrating to lose a challenge because you’re being penalised for causing a collision that – to the best of your knowledge – was no fault of your own. It doesn’t happen much, but you can guarantee that when it does happen it’ll be at the worst possible time. 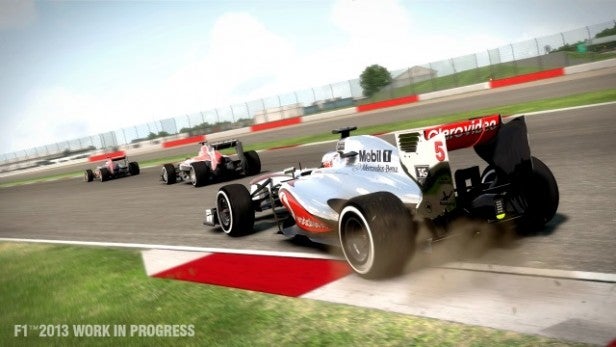 However you play it, F1 2013 isn’t for the faint-hearted. You have to get used to the precision handling, and it’s the kind of game where you have to put in time to learn the tracks and get a feel for the cornering if you want to make progress. Using KERS and DRS tactically is important, as you’re limited in how you use them, and daring overtaking manoeuvres frequently end in a collision. Racing sim fans might sneer at F1 2013, but it’s certainly no Need for Speed or even a GRID. Even with a flashback rewind-and-replay facility borrowed from the latter, it’s a challenging game.

F1 2013 is the best-looking F1 game we’ve seen yet, too, but as Codemasters has released the only F1 games since 2007’s Formula One Champion Edition, that doesn’t necessarily mean much. Luckily, it is a bit of a looker. Real motorsports tracks rarely have the dramatic scenery you’ll find in arcade racers, but here the beauty is in the detail: the reflections on the bonnet, the highlights on a driver’s helmet, the incidental details that add a little extra life to the track. The dust and water effects work brilliantly, and racing Shanghai or Monaco in the rain is a serious thrill. 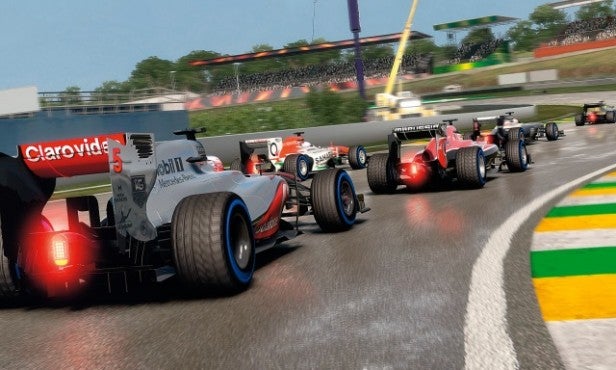 The rain effect isn’t the best we’ve ever seen, and the lighting isn’t quite up there with Forza Motorsports 4 and Forza Horizon, but it’s all very believable and telegenic, and it’s no picnic rendering such a packed field of racers without any frame-rate headaches. We also love the presentation of the Classic events, which adopts the colour palette of old TV footage without going bonkers on cheesy vintage effects.

In fact, the presentation overall is pretty slick, with stylish menus and a decent soundtrack. F1 2013’s selection of modes means that it suffers a little from FIFA’s problem, where it’s a bit of struggle to work out where all the different modes fit in, but that’s not a huge complaint.

Verdict
While it doesn’t make an astounding first impression, and the F1 Classics mode isn’t as big as you might think, F1 2013 is a fine F1 game. There are enough assists and game modes to cover everyone from F1 fanatics to more casual fans, and the action on the track is fast and visceral, with no shortage of high-speed thrills. F1 Classics mode adds a new, dangerous edge, and small improvements come together to enhance the racing experience. This is Codemasters’ best F1 yet.