Freedome is quick, but only supports the most mainstream use cases and devices. It isn't a great choice for streaming enthusiasts, either.

Cybersecurity firm F-Secure has built its own VPN, F-Secure Freedome, from the ground up and makes a headline feature of its tracker and malware blocking.

That’s a fairly common feature among VPN providers, but F-Secure has the benefit of being able to leverage its impressive threat detection network to help block malicious sites.

Unlike some VPNs produced by cybersecurity companies, Freedome isn’t a white label version of a better established VPN service, and it isn’t missing significant features. For example, there’s a kill switch you can enable to prevent accidental data leakage, if your VPN disconnects unexpectedly.

There’s no monthly subscription option, but there is an unlimited five-day free trial that doesn’t require registration to use. I’m always a fan of these, as they mean you can quickly set up a VPN connection on a newly installed system without fuss, and deal with account creation and password management later.

The Freedome client is pretty simple, but has a couple of unusual features. Its main interface displays buttons to connect and to select your endpoint location; you can choose from 22 countries. It also shows the number of malicious sites and trackers blocked by the service.

Note that some websites and services will not work at all if their ad trackers are blocked. However, it’s easy to disable and re-enable as and when you need to via the tracking protection tab on the left-hand side of the client. Similarly, you can disable browser protection, which guards against malware, although you’re less likely to need to ever do this. An interesting bonus feature is the tracker mapper, which, for 24 hours, records a local log of all trackers your device encounters.

F-Secure Freedome uses OpenVPN for its connections, except for its iOS client, which lacks a kill switch and uses IKEv2. However, with support limited to Windows, macOS, Android and iOS, F-Secure’s claim that you can use it on all your devices is somewhat overstating. I’d like to see OpenVPN profiles made available, so more advanced users can install them manually on whatever compatible hardware they please, such as Linux PCs or a router to send an entire network’s traffic across the VPN. 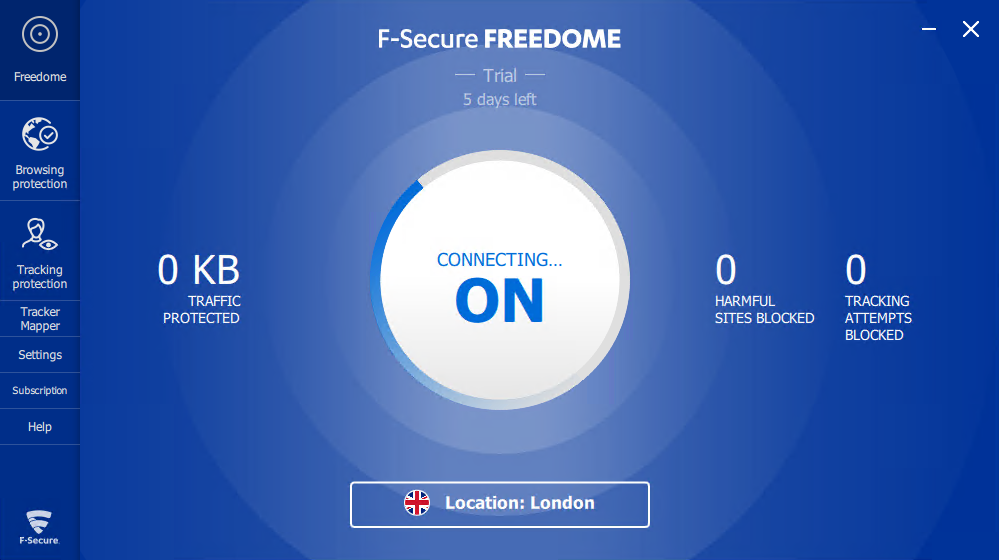 Freedome comfortably exceeded the test group’s average performance for the US and Netherlands endpoints, and only just fell short of the UK average. Still, you’re unlikely to experience any performance problems for even bandwith-intensive applications.

However, F-Secure doesn’t target region-shifting streaming video enthusiasts. If you can load up a local streaming service while connected, that’s fortunate, but don’t depend on Freedome for this. Unfortunately, it doesn’t have any kind of whitelisting for either applications or domains, which means you have to disconnect your VPN if you want to watch iPlayer.

Should you buy F-Secure Freedome?

F-Secure has a policy of not logging any identifying data, and is a company that’s proved itself worthy of trust in other fields. When Freedome servers were illegally seized by the Finnish National Bureau of Investigation in 2019, it was proved that no logs were kept of which sites subscribers visited, although the agency hoped to piece together some evidence on a suspect based on how long they remained connected to the service. F-Secure vigorously and successfully fought against the log seizure.

Freedome’s pricing just can’t compare with better-value propositions such as Surfshark‘s two-year, ultra-fast and streaming-friendly subscription for an unlimited number of devices. And if it’s security you’re after, ExpressVPN is always a good bet, even if it is more expensive. Check out our Best VPN list for even more options.