F.E.A.R. is probably the best first-person-shooter of the year. It’s also a slight disappointment.


I say “probably” because we’ve yet to see Call of Duty 2 or Perfect Dark Zero. The disappointment, I’ll get along to later. For now, it can safely be said that this is the most atmospheric, exciting, and thoroughly engrossing shooter I have played since Half-Life 2. It’s a better single player offering than Quake 4, and puts every other FPS this year to shame. It’s a must-have PC title – one of those games that you owe it to yourself to experience. Whatever else follows, I can’t say this enough. 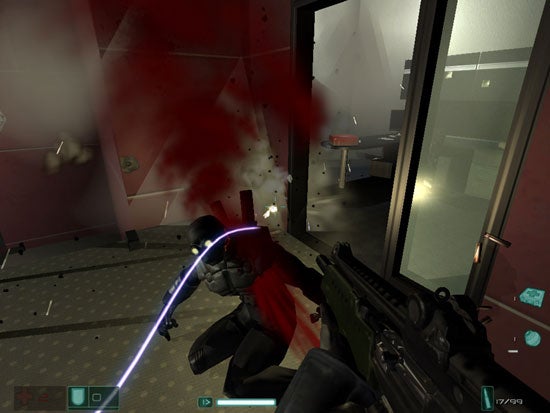 A lot of the appeal is down to the game’s much-hyped ‘bullet time’ feature. F.E.A.R. regularly hits you with unbeatable odds, and the only way to survive is to take control of time. You hit the key, the screen blurs, colours lighten and suddenly you’re in the middle of the most beautifully choreographed action scene in PC gaming history. A leap into the fray, turn, fire. Watch the bullets streak past and the spent cartridges fly out. Hit the ground, pivot, shoot again. Perfect headshot. Another faceless trooper tumbles to the ground. A shot flies out from the rear. Spin, aim, fire another burst. With a whoosh, time settles back to normal speed, and you’re (hopefully) surrounded by corpses. It’s a genuinely brilliant trick. 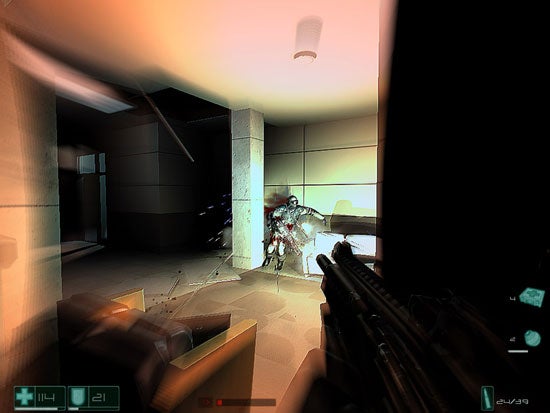 And F.E.A.R. uses it again and again and again. You can do sections of the game without ever touching the slowmo key, but on a decent difficulty level the game practically grabs you by the collar and demands you to. It’s not just the numbers of your enemy, it’s their intelligence. These guys will make use of cover, race to outflank you, band together to surround you, and find alternate routes in order to surprise you. They won’t go down easy, and they’re happy to riddle you with suppressive file. Outside of online games, I’ve never found opponents who make combat such an exhilarating, challenging experience. The ordinary troops – a bunch of armoured clones – are bad enough, but once the game starts throwing in the heavy troops and ultra-fast, camouflaged cyber-ninjas, it takes nerves of steel not to run home crying to mummy. 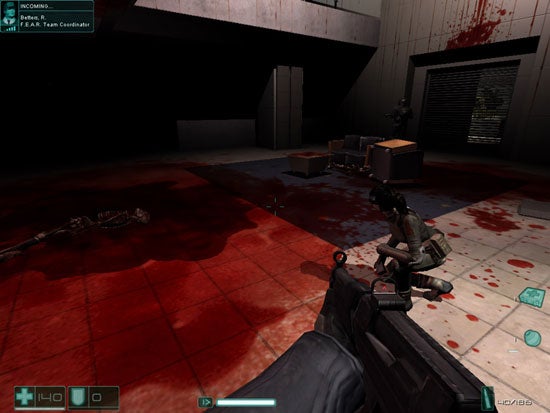 What’s more, the game is incredibly atmospheric. Much has been made of the inspiration F.E.A.R. has taken from The Ring, The Grudge and the rest of the Japanese horror crowd – the creepy girl, the unsettling ambient noise, the sudden visions – but Monolith deserves credit for the way it has taken these elements and created a powerful action/horror hybrid. Suddenly, Doom 3’s shock moments seem awfully silly, as F.E.A.R. works your pulse hard with its terrific lighting and spot sound effects, winds you with a grisly nightmare interlude, then throws you straight into the thick of combat before your nerves have had a second to calm down. 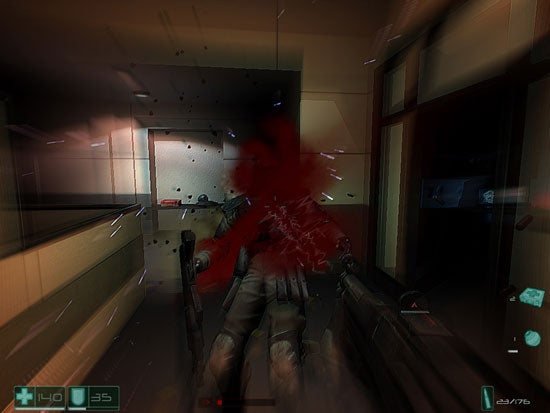 And technically the game is a near masterpiece. Monolith’s new engine rivals Valve’s mighty Source when it comes to gritty textures, shiny surfaces and realistic water, and the displacement effect used on the glass bricks in the game’s office sections is a touch of beauty that would do any game proud. If anything, the lighting is even better. If you like eerie glows, worrying shadows and dynamic lighting, then F.E.A.R. will give you everything you’re after. The way ceiling lamps swing in the aftermath of combat is lovely, plain and simple.


In fact, those with a destructive bent have plenty of reasons to be pleased. Where Quake 4’s environments seem impervious to grenade impact, shotgun blast or anything short of a nuclear explosion, F.E.A.R goes big on shattering glass, exploding plaster and huge fireballs destroying chunks of scenery. The flame effects and sparks make you glad the gunfights are seen mostly in slow motion; it’s the only way you could ever hope to appreciate the detail. 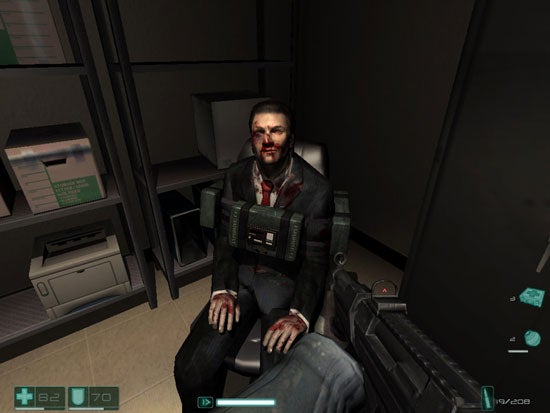 And let’s not forget about the sound. The music is nigh on perfect: slow and atmospheric when it needs to build tension, violent and bombastic when the bullets start flying. The clatter of an SMG, the thuds of impact and the sound of bullet casings hitting ground deserves to be heard over headphones or with a decent 5.1 surround sound setup. The radio messages sent by your enemies not only give them character, they also give you information. When you hear calls for reinforcements, you know you’re hitting them where it hurts. The whoosh of time slowing down and the weird, low timber of the effects before it winds up again has to be one of the best gaming noises of the year. 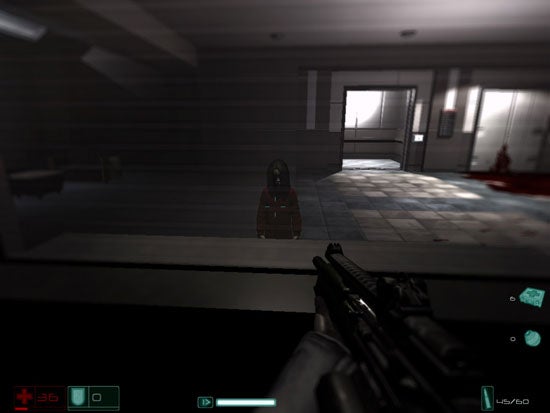 So, F.E.A.R. looks great, sounds great and – believe you me – has some of the best combat features in any FPS, full stop. So why the disappointment?


Because, great as it is, F.E.A.R. isn’t all that it could be. Everyone always talks about Halo and its ‘thirty seconds of fun, over and over again’ formula, but the thing about Bungie’s classic was that it didn’t just hit you with the same thirty seconds, it constantly gave you new environments, new, tougher enemies, new challenges and new ways of tackling them. This is where F.E.A.R. falls down. 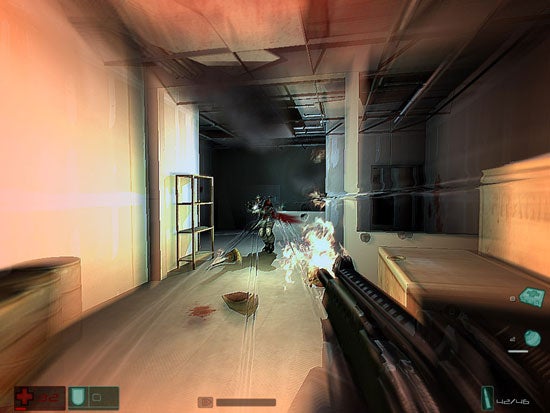 First, let’s talk about the environments. Aren’t we all getting tired of the same industrial complexes, the same walkways, the same service tunnels, ventilator shafts, crates and ladders. Well, F.E.A.R. wheels out all the familiar clichés in its first third, then hits you with another series of office block clichés in its second. It’s realistic. It looks beautiful, but there is nothing here to take your breath away – nothing that you haven’t seen before.


Also, while the levels are well designed and the scary bits provide their share of standout moments, this isn’t a game full of stunning set pieces. Don’t get me wrong – it’s packed to the gills with great gunfights, but after a while they all start merging into one. And as for the enemies….simply put, there aren’t enough of them, and once you’ve taken down the umpteenth squad of clones, you begin to get tired and wish for something else. The ninjas and the heavy dudes are great, but we really needed a little more variety. 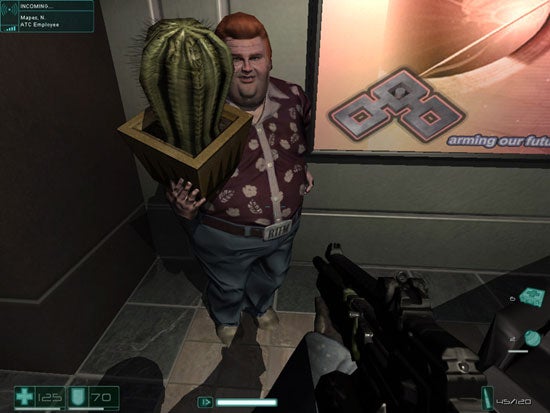 Remember Half-Life 2? How each section of the game had its own identity, its own feel, its own distinct challenges and set piece moments? The way it made you feel part of its own gloomy, post-apocalyptic world, and gave you a sense you were steadily learning and making progress through it? Well, F.E.A.R. never quite achieves the same effect.


Still, it does achieve an awful lot. This isn’t a game to cram into one action-packed weekend, but one to leave behind when you feel bored. Return afresh, and you soon remember all the reasons why you love it – the atmosphere, the scares, the sheer high-octane thrill of the combat. F.E.A.R. might not be a classic, but it’s close. So damn close, you’ll want to give it the proverbial cigar.


Frightening, thrilling and stunning to look at, F.E.A.R. falls down when it comes to progress and variety. Even if it’s not a classic, it’s the best FPS so far this year. 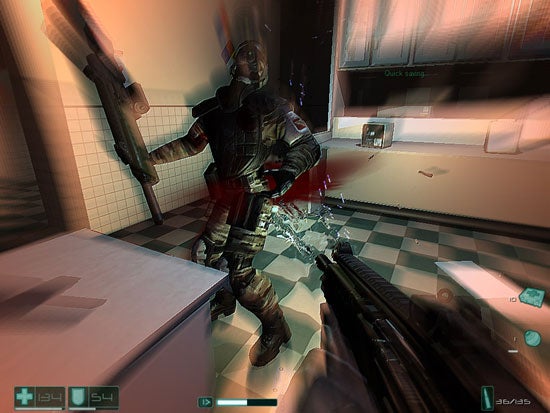