I really, really want to love F.E.A.R. 2: Project Origin. In many ways, it’s a perfect sequel, taking all the things we loved about F.E.A.R, fixing many of the aspects that we didn’t and adding new features and an extra layer of visual polish to enhance the whole experience. Unfortunately, it’s not the sort of game that inspires such a strong emotional response. It’s a likeable game and frequently enjoyable. It’s a sequel that fans of F.E.A.R. can buy without too much concern. All the same, it’s hard not to feel slightly disappointed. Maybe it’s not Project Origin at fault – maybe it’s us. We’ve been spoilt in the last three plus years by wave after wave of Schwarzenegger-sized first-person-shooters, and when F.E.A.R. 2 wades out it’s a bit more Dolph Lungdren or Jean Claude Van-Damme. 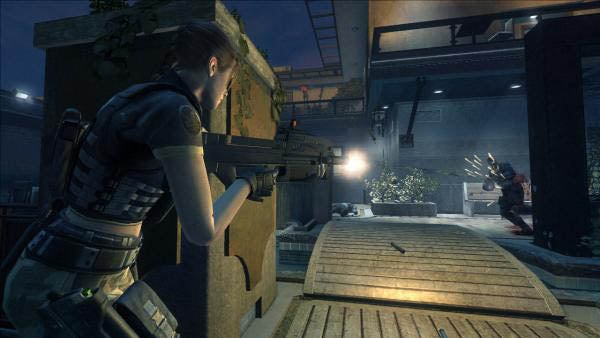 If you played F.E.A.R., the elements of the sequel will be instantly familiar. The storyline frames the action of the original game, opening in parallel with the final act of F.E.A.R. then moving on to cover what happens next. As an all new special forces operative, Becket, you find yourself caught in the crossfire between the forces of the evil weapons corporation, Armacham, and the unleashed supernatural powers of its ghostly creation, the spooky Alma. Combat is still the main order of the day, whether Becket is pitted against Armacham troops or Replica soldiers under Alma’s psychic control. Once again the game’s first major selling point is its reliance on a cool slow-motion effect, where Becket can trigger a state of heightened speed and awareness in order to carve his way through enemy squads like an electric knife through a particularly rare Sunday roast. And, as in the first game, these bloody, bullet-time encounters are punctuated by weird, scary episodes full of nightmarish imagery and sudden disruptions to Becket’s vision and environment. Think John Woo’s Hard Boiled meets Hideo Nakata’s Ring and you’re not too far wide of the mark. 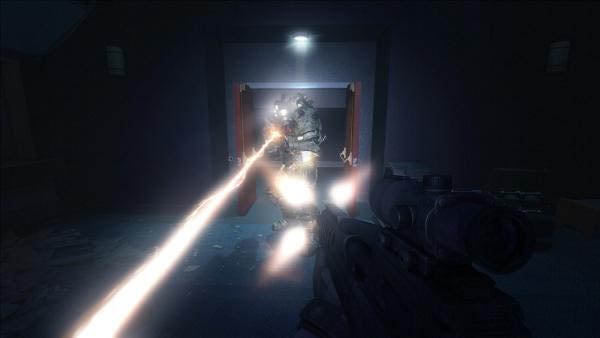 Project Origin does all this stuff, and arguably it does it better than the original game. The nightmare sequences are more varied and the imagery less directly indebted to Japanese horror, and there are still points at which the game successfully makes the scalp tingle with something like fear. Alma – now in adult form – retains her creepiness, and if anything F.E.A.R. 2 is more skilful in its merging of action and supernatural horror than its predecessor, throwing in new elements that successfully bridge the gap between the two genres. Fast-moving, freakish crawling mutants make for a nice change from the normal armoured troops, as do the ghoulish ‘puppet-master’ creatures who can resurrect nearby corpses and bid them do their deadly will. 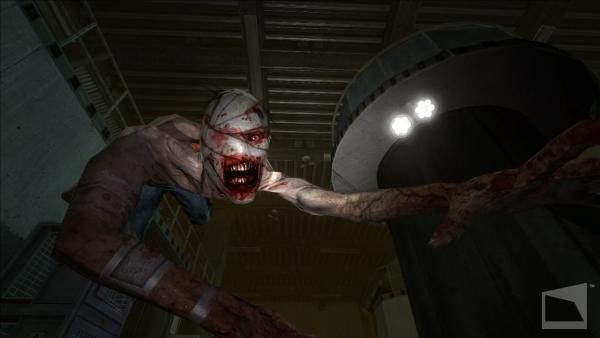 Most importantly, however, the central game mechanics are just as much fun as they ever were. For a long time F.E.A.R. was my benchmark for FPS combat, for the simple reason that it pitted you against reasonable numbers of believably intelligent enemies who seemed capable of working together, but gave you a vital tool – slowmo – with which you could even the odds. Any F.E.A.R. player will remember the rhythm of the game. First, the recognition that you’re about to face a battle, then the tension as you moved into position. Then came the release, as you triggered the slowmo and began your frenetic dance of bloodshed, blasting one guy here, swivelling to catch another, side-stepping and pivoting to target a third adversary, then leaping over a barrier and twisting to tackle the fourth guy lurking behind it. Then there’d be a moment of controlled panic as you scuttled for cover before the slowmo had worn off, followed by taut suspense as you waited for the slowmo guage to refill. This cycle would repeat until the battle was over, and it was onto the next hostile encounter.

F.E.A.R. 2 works in exactly the same way and does exactly the same things, helped along by even smarter enemy troops who are now capable of flipping furniture and creating their own cover, and your ability to do the same thing. As before, there’s a strong element of tactics to the fighting, as victory is a lot easier if you have a clear idea of the environment and plan your attacks before triggering the slowmo. However, it’s never a dry, technical affair for the simple reason that plans go awry, new enemies appear and you’re always fighting to the edge of your abilities. Many games have tried to replicate the experience of the classic lobby gun battle from the first Matrix film, but F.E.A.R. was one of the few to actually manage it. Now F.E.A.R. 2 can make the same proud boast. 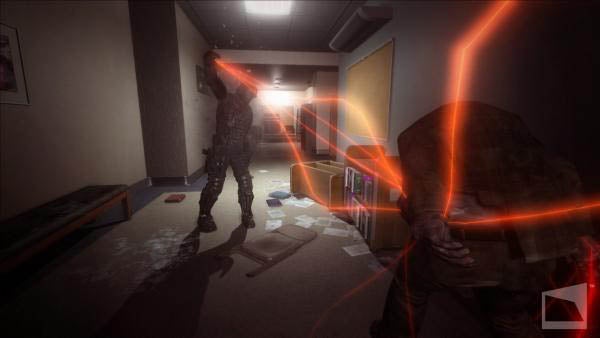 Some new additions seem designed specifically to please the hardcore fanbase. Remember those big robot suits that gave you such a hard time around the Armacham facilities? Well, they’re back, but this time you can take one for a spin yourself and engage in some thoroughly cathartic rampaging through a ruined city. The storyline also goes even further into the history of Armacham and Alma, bringing back old characters, introducing some great new ones and showing what Alma can do when she’s really let loose. Other improvements feel aimed specifically at complaints about the original game, most of all its lack of scenic variety. F.E.A.R. 2 still sticks to modern industrial, civic and commercial environments, but at least we see the odd bit of daylight and even the interior of an elementary school on our journey. As someone who got heartily sick of F.E.A.R.’s office-block locations (and warehouses – ed.) during two play throughs, I would definitely describe this as a change for the better. 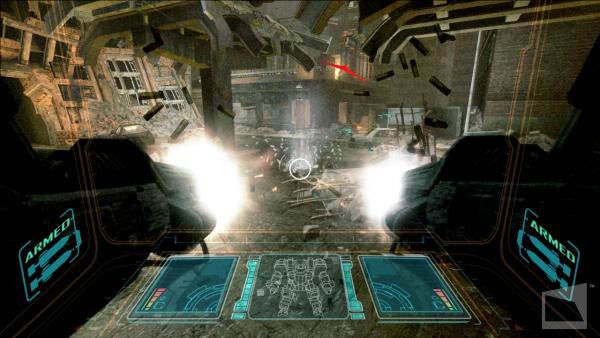 All of this stuff is good, but the question I keep coming back to while playing F.E.A.R. 2 is, is it enough? And the reason I keep asking that question is that Project Origin is badly scarred by that least exciting of weird phenomena: Deja Vu. Simply put, F.E.A.R. 2 feels so much like the original game that it’s in danger of feeling like an expansion pack, and three years on the whole experience has dated. Forgetting the slowmo for a second, this is as staid and traditional a corridor shooter as I’ve played in the last two years; a fact not helped by linear level design, a reliance on gloomy indoor environments and an overall lack of scale. Claustrophobia is certainly good for tension, but you can get too much of it, and you spend much of the game waiting for the designers to open out a bit more and show us something bigger, brighter or just, plain unexpected. 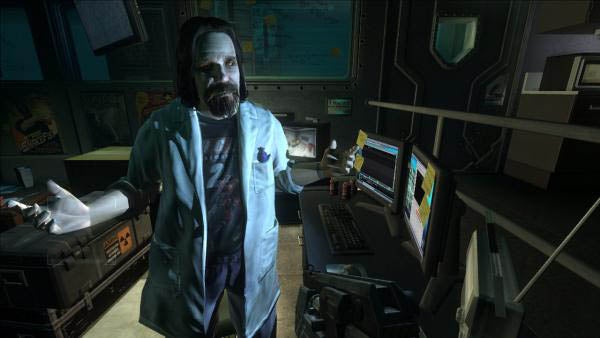 Throw in such old tropes as the health bar and medikits, and you have a game that feels like it stems from an older generation of shooter. Meanwhile, all those illusions and visions, while effective, are losing their impact with time and repetition. In the wake of EA’s Dead Space – a game that had scary atmosphere and shocks to spare – F.E.A.R. 2 only manages to muster up a few really frightening moments. It’s a creepy game with some slick use of in-game cinematics, but atmospherically it’s not in the Silent Hill/Dead Space/Bioshock league.

I think there are also some issues with the structure. F.E.A.R. 2 offers a surprisingly long single-player campaign, but it’s a bit of a slow burner. The early levels plod a bit too much, and it’s a while before we get interesting new enemies, impressive set-piece moments or access to the most destructive weaponry. Then suddenly you get a whole lot of goodies clumped in at once. Compared to F.E.A.R.’s skilful and steadily escalating introduction of new ideas, new arms and new enemies, you get the idea that the sequel holds too much back for too long in reserve. 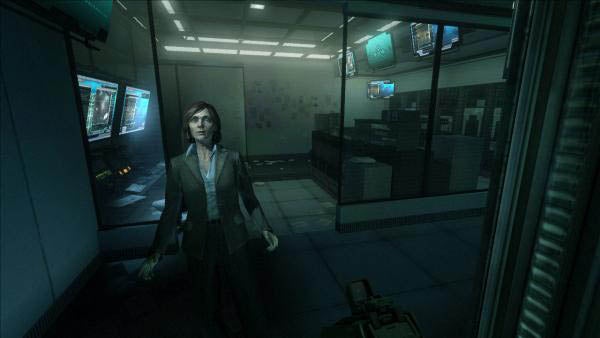 Nor does it help that F.E.A.R. 2 doesn’t exactly look cutting-edge. Sure, there have been improvements to the lighting and we get a new raft of post-processing and particle effects in the slowmo combat and nightmare sequences, but this is still a game full of bland textures, boxy environments and less than photo realistic character models. Two years ago this might not have been a problem, but having played Killzone 2, Gears of War 2, Resistance 2 and Crysis: Warhead in the last six months, F.E.A.R. 2 again feels like yesterday’s game. It’s F.E.A.R. with an extra layer of polish, not F.E.A.R. taken to a whole new level. 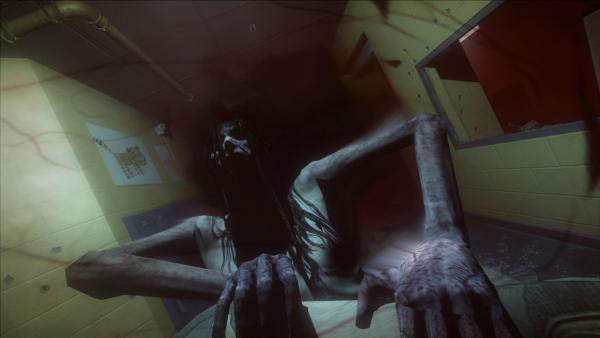 With limited experience of the multiplayer portion of the game under my belt, I wouldn’t like to make too many sweeping comments about it now, but again I come away feeling a mixture of admiration and disappointment. Admiration, because the team at Monolith has innovated and made some some smart design decisions. For example, it has transformed old game modes like Capture the Flag just by swapping the flag for a tank of dripping green glue that leaves everyone a nice trail to follow. Meanwhile, a new customisable class system where you can effectively roll your own load-out is to be commended. All the same, the games I’ve played have yet to convince me that there’s anything here that I’ve never seen before, and I suspect that a lot of players will give F.E.A.R. 2 multiplayer a go then return to Call of Duty 4, Resistance 2, Halo 3, Crysis or whatever their current favourite happens to be. 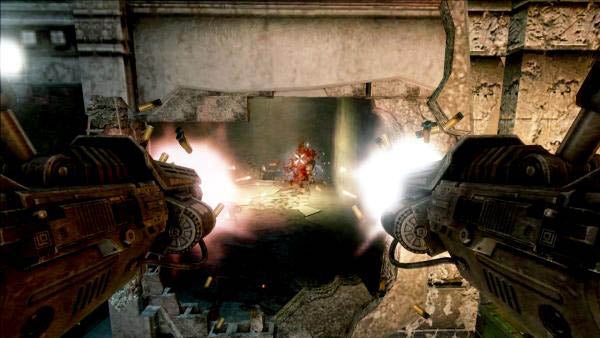 Taken as a whole, I’ve found F.E.A.R. 2 a very difficult game to judge. Like any critic, I try to take various technical and visual factors into consideration, but in the end I’m always guided by my personal feelings and my experience of playing the game. With F.E.A.R. 2 I’ve had some high points and some moments of real excitement, but also a lot of ‘is this it?’ and ‘do they really think this is good enough?’ F.E.A.R. 2 will still have a strong enough appeal to two groups of people: those who bought and loved the original will be reasonably happy to just have more of the same but slightly better, while hardcore FPS fans will know it and appreciate it for the high-class corridor shooter that it is. If you’re not in those groups, however, then there’s no reason to rush out and buy F.E.A.R. 2 right now. It’s a perfectly decent shooter, but with a property as exciting as F.E.A.R. decent isn’t really good enough.


F.E.A.R. 2 is good enough to grab fans of the original game, but not great enough to take its Asian horror/Hong Kong action movie mix to a whole new level. Enjoyable, but mildly disappointing.