There’s no denying that NAS devices are incredibly useful. Aside from the obvious peace of mind brought on by knowing all of your precious data is backed up and safe in the event your PC dies, or you accidentally shift-delete an entire folder not just a file (yes, I did that; yes it was stupid), being able to access your music, pictures or videos from a networked media player, TV or games console is pretty useful and, of course, somewhat cool.


Of course, we can’t all fit a Netgear ReadyNAS NVX into our properties, let alone afford one, but there are more practical options available such as the Buffalo LinkStation Mini and Thecus N0204. However, in reaching their diminutive dimensions, some features are sacrificed. The EZY MyXerver, on the other hand, is both small and attractive, and also packs about as heavy a feature set as any consumer NAS could need. 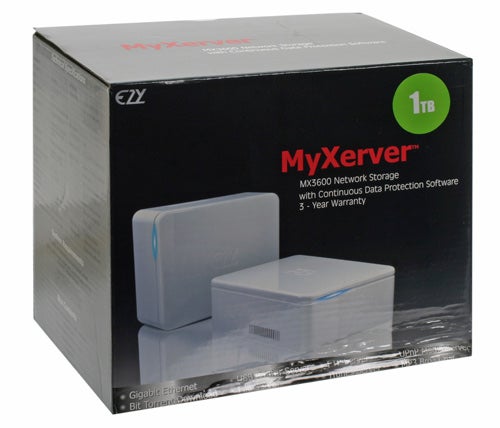 The one concession made is the use of a single drive, giving the MyXerver itself no redundancy. However, in a home environment you’re unlikely to be working from your network attached storage, but rather backing data on a PC (or PCs) up to it. As such, if the hard drive in the NAS or your computer breaks, the data still shouldn’t be lost (unless both drives fail at the same time which, let’s face it, is pretty damn unlucky).


The MyXerver is available in capacities ranging from 500GB to 2TB of storage, which should be capacious enough for the average household. Furthermore, the 1TB model I tested costs about £130, which isn’t too expensive at all. 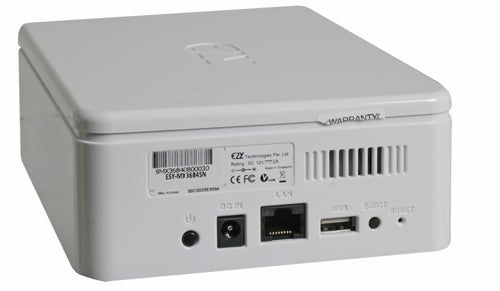 The use of one hard drive does at least mean the MyXerver is fairly compact, and as a bonus it looks stylish too, even if blue status LEDs are getting a little old now. The MyXerver is a fanless system so the only noise it produces is that of its hard drive, which even on a desk is barely audible – always a bonus. Connectivity is minimal, with an Ethernet port and power socket obviously required and the only other input a USB port for making quick backups to the system.


Set-up is pleasantly simple. With the MyXerver hooked up to your network, the included software tool will find it, let you rename it and map it to a network drive. Any further configuration uses the web interface, which is a bit old school looking, but does the job. By default the entire drive is shared, but you can create as many shared spaces as there is capacity spare to create them, accessible to any number of users.

Considering the price, I was surprised how decent the bundled NTI Shadow backup software was. You can choose which files or folders to back up and whether you want said backups performed on a regular basis, or after every file change, and as long as the software is running you can rest easy knowing your data is safe. NTI Shadow will even resume its backup process in the event of a disconnect, so if your cat decided to pull the Ethernet cable out of your PC mid-backup, you won’t have to start again.


The MyXerver supports media sharing with simple UPnP access taking care of most devices’ access needs, but you can also use the device as an iTunes server, offloading your music to a central location. Web access to all data is also possible, though you will of course need to remember your router’s IP address, or use a Dynamic DNS service, which the MyXerver helpfully supports, to access your data remotely. 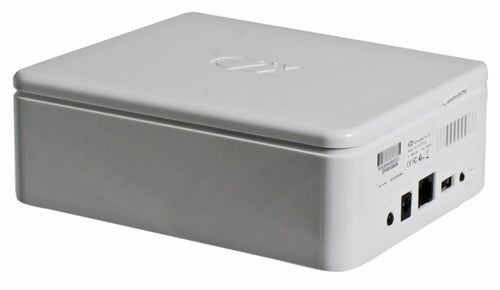 The MyXerver also has a built-in download manager that will work either with simple HTTP and FTP, or with Bit Torrent downloads. A destination folder for the completed download can be specified and once added there’s a simple interface for checking download statuses (and speed) and pausing or restarting transfers.


A backup screen lets you save either the MyXerver’s configuration files (useful if you’re upgrading the firmware) or backup the contents of the system to another NAS device. The MyXerver also features a printer server. Connect any USB printer to its USB port and suddenly it’s a networked printer instead. 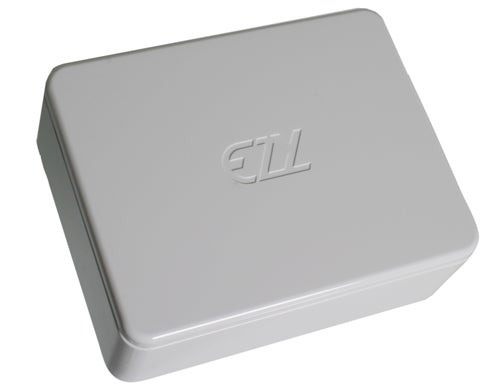 Obviously if you just have a single PC you’d be better off either putting another drive inside it, perhaps in a RAID array, or getting a non-networked external drive. But that rather defeats the multiple benefits of network-connected storage and with a growing number of devices able to access data on a NAS device – from DAB radios to games consoles to TVs – it’s only going to make them more useful in the future. Given the price, therefore, the EZY MyXerver is a compelling purchase.


The EZY MyXerver is a better featured NAS device than its price might lead you to believe. There’s little else out there that will do the same for the money, plus it also looks pretty sharp and operates as quietly as a mouse wearing mittens, which is a clear bonus.