Home security cameras have been around for a number of years now and they’ve been steadily improving all the time. However, most affordable models are either for indoor use only or require an external housing to keep them protected from the elements. Hoping to finally provide a complete, one stop, low cost security solution is EyeSpy247 with its originally-named EyeSpy247 Ext that is waterproof, has infra red night vision, Wi-Fi, and both a speaker and microphone. 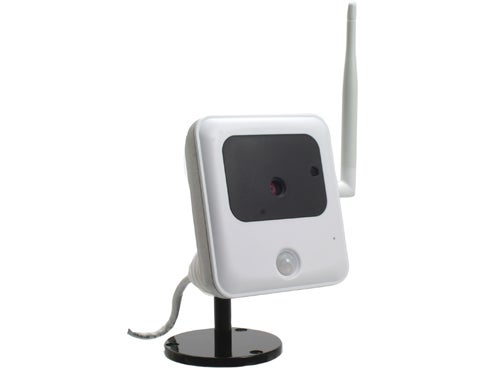 You might not expect the EyeSpy 247 Ext to be so hardy given its external appearance. While its metal construction gives a clue, the unprotected network, aerial, and power ports suggest otherwise. Its dimensions of a mere 103 x 94 x 37mm also suggest a more delicate product – certainly this is a far cry from your classic CCTV box or the external mountings available for most IP cameras.


So clearly this thing isn’t built to survive a bombardment from stones or baseballs bats, and you’ll want to mount it in a secure place, out of reach. Where the weather protection comes in is via the provided cables. Incorporated into them are rubber covers that envelope the plug and socket, thus keeping the water out – the rest of the cable is left to battle the elements by itself.


One early slip-up in this respect is the shortness of the supplied cables. Each is only about one metre long, which given the allowance of a few feet to reach the internal sockets and get through your wall, doesn’t give you much wiggle room. You can remove the rubber seals and attach them to longer cables, but this will require either cutting the original cable or stretching the seal more than we’d feel comfortable with. 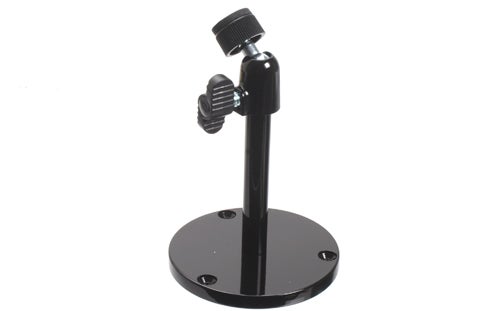 A mounting bracket is supplied, which consists of a three inch steel rod attached to a circular steel plate for mounting to a wall, and a ball joint at the other end for allowing freedom of movement for the camera. Loosen the retaining screw and you can move the camera to aim in almost any direction, given a bit of perseverance. Bar the effort of drilling routing holes for the cable and mounting holes for the bracket, it really is a cinch to mount and get pointed in the direction you want. 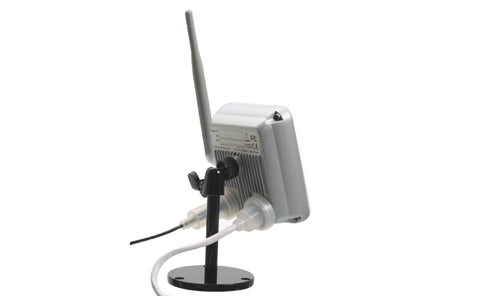 Once mounted and connected up, the rest of the setup can be as simple or as complicated as you wish. If you’re happy to use a wired network and simply setup a generic movement sensor then you just open a web browser, navigate to the IP address of the camera and use its inbuilt web interface. Or if you’re a novice, you can install the included software, which will find the device (whether connected by wire or Wi-FI) and install the drivers for you. 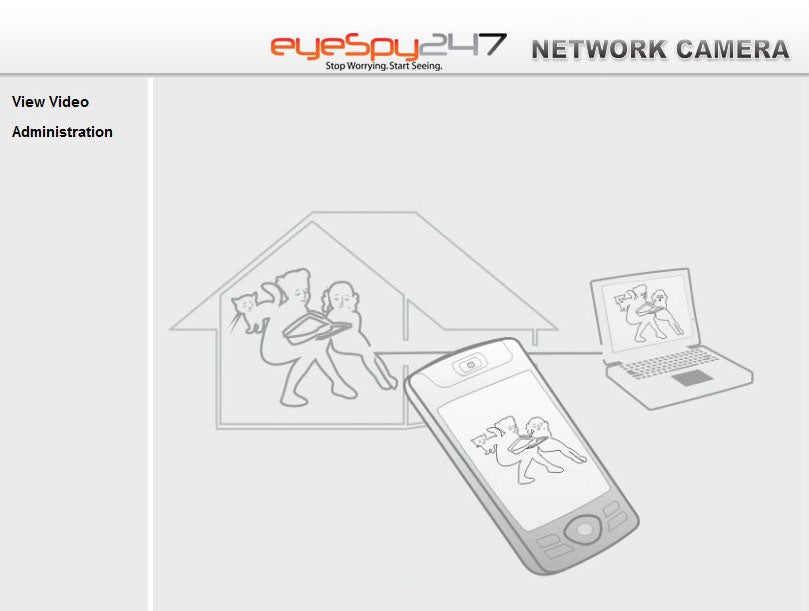 The web interface enables you to view the video stream in either MPEG4, AVCHD or MJPEG formats. The former two require installation of the Apple QuickTime plugin while MJPEG works natively with Java, which is also required to use the few options that are present in the web interface. 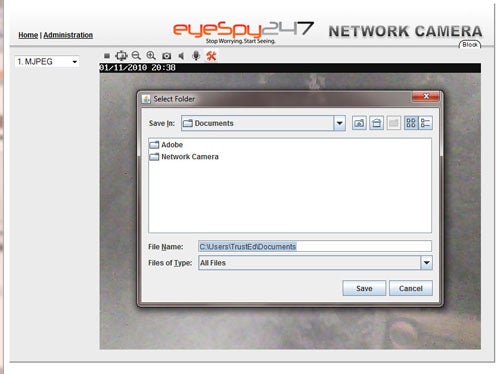 At this point you can simply watch the video, manually record it or setup motion detection to automatically record footage to your PC or a networked storage device. It’s all a bit rudimentary with the icons being rather ambiguous and the interface somewhat slow but it’s not too much of a headache to setup.

The same can be said for the included software that suffers from the usual pitfalls of an overly stylised interface that lacks in ease of use. It looks vaguely like some sort of professional hardware video surveillance equipment equivalent but, without the physical controls to match up to the software ones, it’s no easier than a more simple layout. 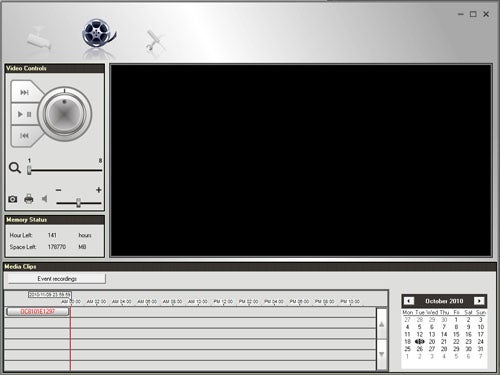 Moreover, thanks to a host of unlabelled icons, some of which don’t do what you’d expect, it’s frankly a bit of a pig to use. That said, once you get the hang of it, it’s quite powerful. 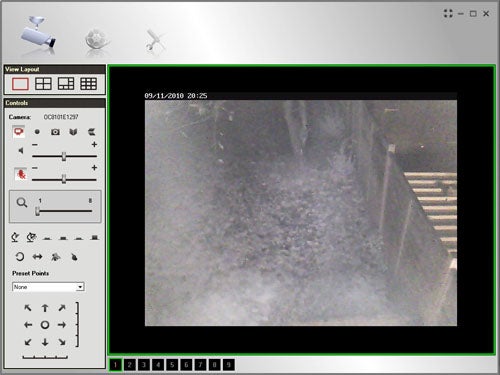 You can control several cameras at once and schedule recordings with options for time of day as well as day of week. These time periods can also be used in conjunction with the motion detection and sound triggering to only record when needs be. All told, there’s definitely room for improvement but with perseverance, it’ll get the job done. 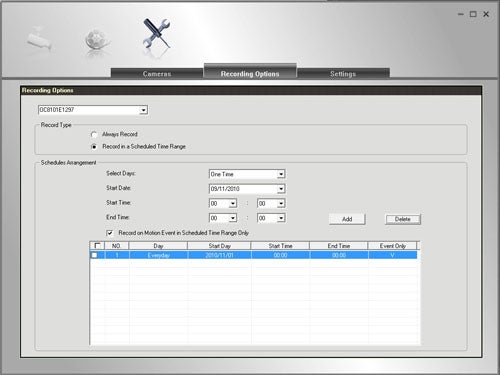 As for the performance of the camera, it holds up very well. A light dousing with water caused no harm to its electronics and it otherwise survived unharmed mounted outside for a few nights.


Picture quality from the 640 x 360 resolution, 1/5inch CMOS sensor is decent with the 30fps providing smooth motion, but colour accuracy is pretty ropey and a bit of extra resolution wouldn’t have gone amiss. With an F2.0 lens it does well in dimly lit scenarios and the eight infrared LED lights have an adequate range for seeing in the dark – we had the camera mounted outside a second floor window and were able to see a fair proportion of the garden. That said, issues with both light bleeding in from the edges of the lens, and the lens having a relatively narrow 62degrees viewing angle meant there was still clearly room for improvement.

(centre)”’This video clip shows the camera at night initially with no extra lighting then with the kitchen light on and finally with the outdoor floodlight.”’(/centre)

Motion detection worked very well and we were able to record footage to our NAS box completely automatically without fuss, whether over Wi-Fi or wired connections. 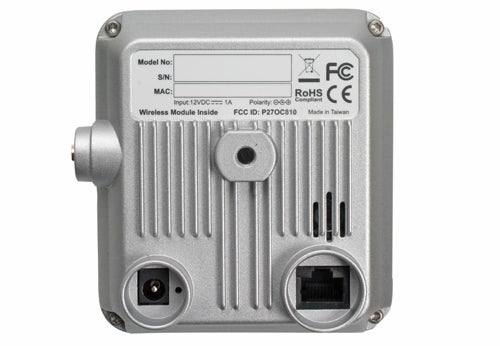 We did, however, have issues with recording audio and communicating using the microphone and speaker. For some reason the software could only seem to mute both or turn both on, resulting in masses of feedback. We’re sure there must be a solution but in the time we had the unit we couldn’t find one. 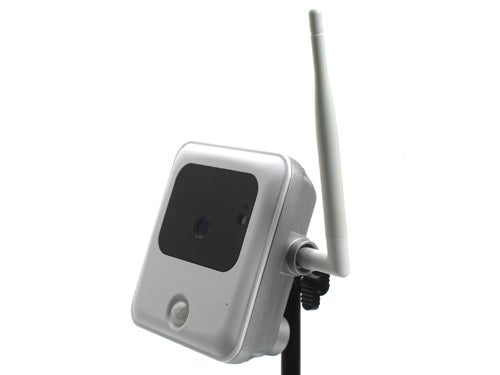 Nonetheless, the EyeSpy247 Ext clearly has enough capability to be a great choice for an external video monitoring solution and the only real stumbling block is price. At around £200, it’s undoubtedly expensive and many people might simply be better off investing in an/a better alarm instead. That said, it does offer decent value considering the raft of features it provides, so if you do need one, it’s well worth considering.


The EyeSpy247 Ext is the one stop shop for home video surveillance that in one fell swoop will provide automated, external video recording. It doesn’t come cheap and has its setup quirks but all told, it’s a great purchase for a family or small business looking to take the next step in security.