What is the Eye-Fi Mobi?

Eye-Fi has been around for a few years now, and its simple aim is to add Wi-Fi to cameras that don’t have it. It was a good idea when it first started, but is it still now that the great majority of new cameras include Wi-Fi?

Eye-Fi believes so, and the key to the Eye-Fi Mobi is that it can automatically push photos to your phone, tablet, PC or Mac – with camera Wi-Fi you have to do so manually. The next obvious question is whether it’s worth the extra considering an 8GB Eye-Fi Mobi costs £33 versus the £8 or so of an equivalent non-wireless card. The answer? A qualified maybe. 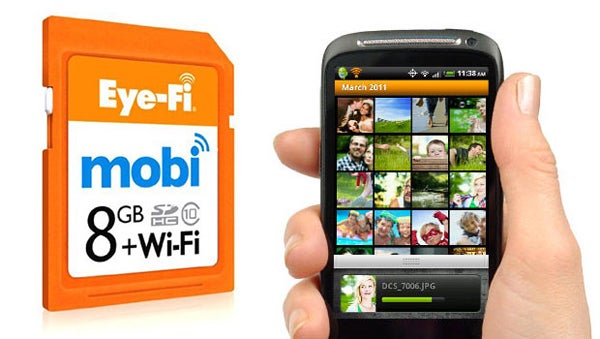 Part of the reason why lies in the difference between the Eye-Fi Mobi, which is aimed mainly at ‘regular consumers’, and the professional stylings of the Eye-Fi Pro X2 model: RAW support. The Mobi will transfer JPEG files as much as you like, but it won’t do the same for RAW files. This won’t be a huge issue for the great majority of people buying an Eye-Fi Mobi, but if you need RAW the £20 price difference is no small matter and the Mobi is already quite expensive.

The other key difference is the Pro X2 also works over standard Wi-Fi networks rather than creating its own Wi-Fi hotspot to transfer photos. However, the Mobi holds a very clear edge where ease of setup is concerned…

Here the Eye-Fi Mobi is a triumph. Much like many cameras, the Eye-Fi Mobi creates its own ad-hoc Wi-Fi network. This means you don’t need another Wi-Fi network available to transfer files, you just need to connect to the Eye-Fi’s network using your desired device. The Eye-Fi Pro X2, meanwhile, requires you to setup an account and use PC setup.

To get this up and running you download the Eye-Fi app, which is available for Android and iPhone. All you need to setup the connection is the activation code that’s stuck to back of the plastic card holder the card comes with. Once connected you’re ready to go and push photos directly to your phone or tablet.

It’s a neat, effective system, but it has one fatal flaw: the code. Not so much the code itself, but that it is printed on the card holder — i.e. something you’re bound to lose within a week of buying the Eye-Fi Mobi. This is the exact problem we had when we went to test the (currently in beta) desktop app.

This, to us, is just plain silly. Though we’re told you can request a new code, a simpler solution would surely be to have the code either on the card itself or saved as a file on the card.

How the card is to operate depends on the camera you use. The Eye-Fi Mobi will work with any camera with an SD card slot, which is all of them bar a tiny number. But some cameras offer superior support and more control — think of it as like ‘Made for iPhone’ except this time it’s ‘Made for Eye-Fi’.

The good news is the selection of recent camera releases is really very comprehensive, so there’s a good chance that the camera you have or are planning to buy is already on there. The extra support gives you much more control over how the Eye-Fi Mobi behaves. You can, for instance, select precisely which photos you want to send your device. 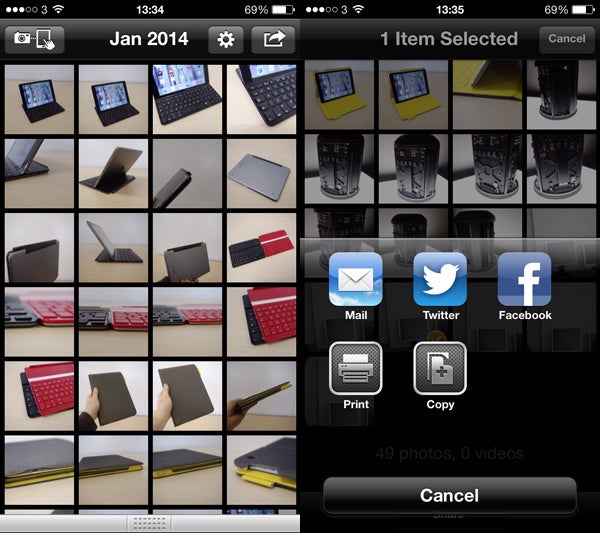 This is great, though by default the Eye-Fi Mobi will push all photos you take on your camera to your connected device as you take them. As mentioned earlier, this is its key selling point. It means you can connect your device, start shooting and then start sharing your photos with very little manual input needed, whereas Wi-Fi enabled cameras still require you to manually select and send photos to your phone or other chosen device.

There’s no doubting Eye-Fi’s system is very elegant, and you’ll be pleasantly surprised at how quickly photos will make their way to your phone or tablet. It’s not instant by any means, but it’s a matter of a few seconds between you taking a photo and it appearing in the app.

This system does come with some kinks, however, particularly if using the card with a camera that’s not Eye-Fi certified. In this instance you have very little control, which means that if you don’t connect your phone and camera together for a while it will instantly begin uploading every photo on the card. 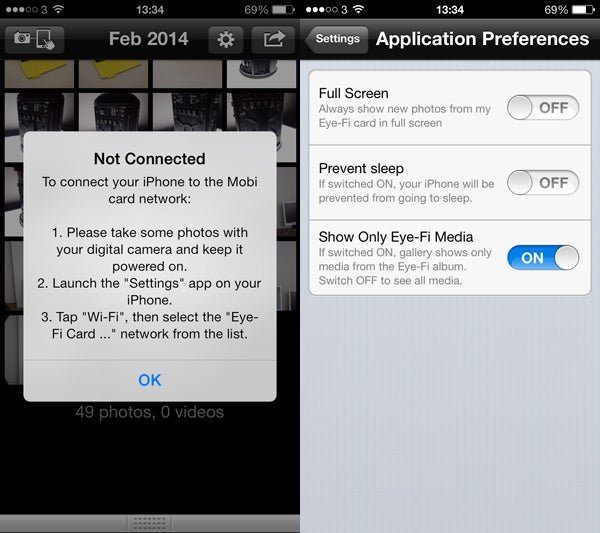 The other reason we can’t outright recommend the Eye-Fi Mobi, despite its evident promise, is the rather basic mobile app. There are apps for iOS and Android, with Android tablets and iPads supported as well. The app does the basics fine, but on iOS it’s limited to sharing to Facebook and Twitter from the app. That means no Instagram, no Flickr, no 500px, no Pinterest and so forth.

While photos are accessible in the iPhone’s Photos app, and therefore any other app that can access your photos, the inability to share more widely is a serious oversight. It would also be nice, though not essential, to have some kind of editing options at your disposal within the app. Again, these are available elsewhere, but the whole workflow of photos to device to sharing service is disrupted by adding all these extra steps.

Making the mobile app richer and more capable would instantly make the Eye-Fi Mobi and a more useful and accessible package.

Another reason to pause for thought is the Eye-Fi’s performance as a memory card. This isn’t to say it’s bad — it’s a Class 10 SDHC card that’s fine to use on lower-end camera with limited burst modes and it copes fine recording HD video.

However, it’s not sufficient for any camera with a serious burst mode. It’s over half as fast as most 95MBps SDHC cards, which wouldn’t be such a big deal if it weren’t for the fact an 8GB Eye-Fi Mobi costs slightly more than a 95MBps 16GB SanDisk Extreme Pro. And with even entry-level CSCs increasingly offering fast 7fps or so burst modes, it’s something more people will be affected by.

Is this a fair comparison? No, not entirely. But, if your camera already has Wi-Fi, which is the better way to spend £30? 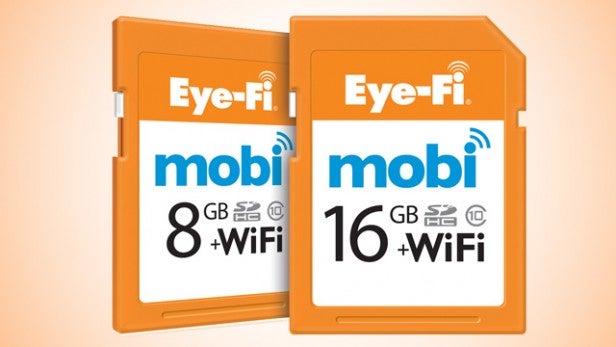 Should I buy the Eye-Fi Mobi?

If your camera doesn’t have Wi-Fi, the Eye-Fi Mobi is worth serious consideration. It’s simple to setup, easy to use and useful, even if it works best on more recent cameras with Eye-Fi support baked in (many of which already have Wi-Fi).

But if you already have a camera with Wi-Fi, it’s a harder sell. The push support is a genuinely useful addition in comparison to the limited Wi-Fi systems on cameras, but it’s let down by the disappointing mobile app. It’s still worth considering if you really want push functionality, but if you’re unsure then the price premium over vastly superior non-wireless cards is too much.

And if you’re a professional looking for a way to quickly share photos with clients without any hassles, you’re better off with the Eye-Fi Pro X2 and its superior speed in shooting.

The Eye-Fi Mobi is an outstanding bit of hardware let down by rudimentary software. There’s promise here but for the premium being asked we want something slicker and more complete.