Extinction does its best to be a big game made on a tiny budget, and to some extent it’s a magnificent success. It’s a game where vast stomping ogres – the Ravenii – smash their way through fantasy towns, while your comparatively tiny Sentinel, Avil, tried to stop them in their tracks. You do so by smashing off their armour, piece by piece, slicing through their appendages and lopping off their heads; a spectacular feat when your foes are skyscraper-sized with arms thicker than the local watchtowers. Extinction’s graphics aren’t the most detailed or distinctive, but if you want to see towns demolished and monstrous hooligans felled in fountains of gore, this is the game for you.

To actually play, though? Well, there you might want to think twice.

Let’s rewind and take things back to basics. As Avil, you’re the last standing Sentinel, charged with defending the realm of men against the evil Ravenii and their comparatively pint-sized mates. In most of the levels that means defending a town against the witless bruisers, rescuing the locals from aggressive orc-like creatures by holding Y/Triangle while they’re standing near a crystal. Rescuing townsfolk and slaughtering the smaller monsters builds up your rune power gauge, giving you a shot at the giant-sized Ravenii. 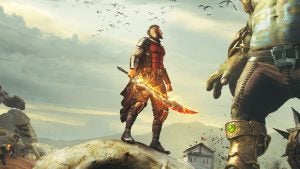 Get close to one, squeeze the left trigger and the action goes into slow-mo. Target a weak point or a piece of armour, and you’ll see it glowing red or surrounded by a flaming red ring. Release the trigger and you’ll launch into the air and slash away at your target, smashing it or cleaving it in twain. Get an ankle and the ogre tumbles to the ground. Whack an arm and they’ll lose the forearm plus anything that they’re holding. Build the gauge to full – sundered limbs fill the meter – and you’re equipped for a final blow. Climb up the ogre, reach the neck and squeeze the trigger, and you’re just one blow away from another headless uberthug.

Only things aren’t quite that simple. The Ravenii aren’t quite as dumb as they look and have strapped armour over their weak points. Sometimes it’s just wooden planking that goes with a single crack, but it can also be heavyweight stuff that only goes when you smash the attached padlocks. It can even be totally invulnerable. In some cases we’re talking padlocks that take two blows to smash or bracers or grieves attached with four padlocks. That’s a whole lot of ironmongery to shatter before you get a chance to bring the big guy down.

What’s worse, there may be two or even three Ravenii at once, all working to reduce the town to rubble. There may be watchtowers you need to protect, and losing these will mean forfeiting the level. You may need to find and rescue a certain number of people, or even specific townsfolk needed for the wider fight.

Reaching some of these will mean Avil using his formidable platforming skills, leaping up the sides of buildings, soaring through the air and using a whip to grapple onto objects or gems on the Ravenii armour. Indeed, where the Ravenii have their legs encased in tougher armour, this is your only option for reaching their big, ugly heads. Even then, you’ll often find the head and neck encased in armour, necessitating all kinds of daring slow-motion leaps off the shoulder, targeting a padlock and smashing it to bits. 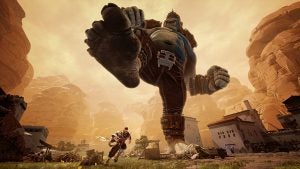 Sounds great, doesn’t it? Man vs Kong-sized Panzer-Shrek in an acrobatic death dance as bustling towns are crushed far below? Sadly, the reality isn’t quite so brilliant.

For a start, the towns themselves are boring; generic settlements where the only signs of life are the people huddled around the crystals, waiting to be rescued. While you’re out tackling the Ravenii, they’re getting slaughtered by the various orc-like creatures, and you simply can’t hope to get them all out of the warzone. Extinction is a bit like a Warriors/Musou game in that you need to work out what’s happening across the battlefield and prioritise where you go and who you kill. When you have several ogres on their way to smash up neighbourhoods or watchtowers, it’s a struggle simply packing it all in.

Then there’s the business of killing off those ogres. With the first few it’s all blood-red gravy, and it’s cool to take the big brutes down. When new types appear – some with the stronger silver armour, some with sorcerous bone plates – there’s fun to be had in working out a strategy. It’s not long, though, before it all gets a bit monotonous. Seriously, another four padlocks to be done before I can take a leg off? Another padlock on a helmet to be smashed? And while you’re slowly working to bring this ogre to his knees, there’s another one battering his way through town. All you can do is watch the town percentage gauge go down, keep pounding away and hope for the best.

With the less straightforward ogres there’s also the problem of navigating your way up their frame, particularly as you’re reliant on a whip that requires split-second stabbing of the bumper button when the icon momentarily appears. When you do, the camera suddenly flips direction mid grapple, and you’re stuck in the ogre’s armpit, not splintering his shoulder armour. Throw in the ogre’s swat and club-swings, where evasion is nigh-impossible, and Extinction can be a gruelling and frustrating exercise in persistence. A generous experience and progression system helps, especially if you choose your upgrades carefully, but maybe not quite enough. 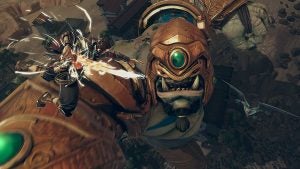 It’s hard work and not always that compelling. It says a lot that the main campaign includes some missions with random elements, while there’s a separate Skirmish mode that’s entirely random. These missions are almost indiscernible from most missions in the rest of the campaign. And while new ogre types and supporting monsters mix things up a little, there’s rarely any feeling that the game is going somewhere. The more you play, the more frustrating and less interesting Extinction becomes.

I might just be able to forgive some of this stuff if it weren’t for two further failings. Firstly, there are no checkpoints. Blow the mission on the last Ravenii and it’s back to square one, no matter how many ogres killed and townsfolk saved beforehand. Secondly, you’re continually getting advice and feedback from a miserable king and a sarcastic scientist. Not only are you facing impossible odds, but you’re doing so while being heckled by dodgy actors spitting out annoying dialogue. A few hours in I wished Avil had an emote button to give them the finger, abandon the battlefield and leave Extinction’s ugly, ogre-plagued wildlands far behind.

I don’t want to be mean. Sure, the basic idea is a riff on Attack on Titan, but there was potential in Extinction’s turbo-charged, giant-slaying action. Yet if Exctinction leaves me feeling one thing above all else, it’s this: the Ravenii are too big and life’s too short to bother.

Good ideas and some solid execution, but Extinction is a game of great ambition spoilt by pint-sized problems. All that limb-lopping, padlock-smashing stuff is just too fiddly. The controls and camera keep on getting in the way. Slaughtering the smaller guys seems dull and often pointless, while the constant onslaught and lack of checkpoints makes some levels a complete and utter pain. Some will relish the gruesome spectacle and challenge, but Execution manages to transform giant-slaying into something of a chore.