Six months ago we reviewed the EVGA X58 SLI motherboard, which combined a Core i7 X58 chipset with triple graphics card slots. That set-up isn’t especially unusual on high end motherboards but using an Intel chipset broke new ground for EVGA as it has been a long term exclusive nVidia partner.


Since then EVGA has expanded its range of Core i7 motherboards starting with the E756 Micro ATX and moving up to the E757 X58 LE which is a Lite version of the E759 which in turn replaces the E758 X58 SLI we reviewed. The differences between the two models seem to be slight to non-existent. Next we have the E760 X58 SLI Classified and at the top of the tree you’ll find the water cooled E769 Classified Hydro Copper with a list price of US $570. 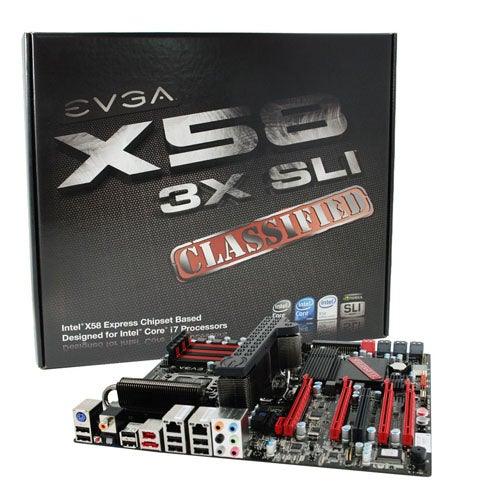 Today we’re reviewing the E760 X58 SLI Classified which is a Deluxe version of the X58 SLI. Where the E758/E759 has triple graphics slots you will find the E760 has four slots which means that the E760 supports Tri-SLI with the option of a fourth graphics card that is dedicated to PhysX.


It’s worth pointing out that the X58 chipset isn’t terribly sophisticated when it comes to PCI Express support so two graphics slots can each have 16 lanes of PCI Express 2.0 but three slots have a x16x8x8 configuration and four slots get eight lanes each.


The E760 has been given a cosmetic makeover and looks quite striking compared to the E758/E759. The most dramatic change is the colour scheme which uses red and black to great effect. The memory slots alternate red and black, the four graphics slots are red, the PCI and PCI Express x11 slots are black, the six SATA connectors on the ICH10R Southbridge are black and the three SATA connectors on the two add-in JMicron controllers are red. 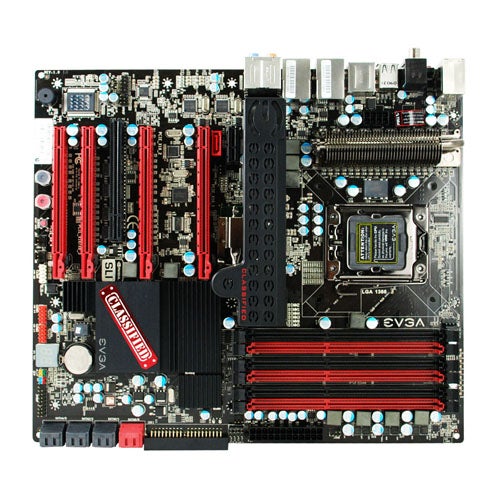 Across the foot of the board the Power button is red and the Reset button is black, along with red USB headers for the four ports on the supplied bracket. There are eight USB ports on the I/O panel along with dual Gigabit LAN, one Firewire, an eSATA and full surround audio with optical and coaxial digital connections. You also get a Clear CMOS button on the I/O panel for when the overclocking going gets tough.

EVGA supplies another bracket that carries a second Firewire port and this is the only point where the red and black rule breaks down as the header for this port is white in colour. 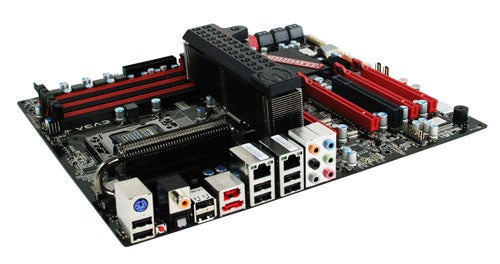 The other big change EVGA made for this Classified model is to the chipset cooling. The E758 uses a strange set-up with a tall passive cooler on the power regulation hardware that looks similar to a garden gate. The cooler on the Northbridge is linked to the Southbridge with a heatpipe and is also quite tall. It carries a small, noisy cooling fan and we found that, unfortunately, the fan is a necessity as the chipset cooler gets uncomfortably hot if you unplug the fan to cut the noise level.


On the E760 it’s all change as the Southbridge is covered by a large, passive, low profile, matt black cooler that sports a ‘Classified’ logo. The power regulation hardware and Northbridge have individual passive coolers that are great big chunky affairs. Instead of standing tall EVGA has chosen to make the coolers very deep or thick with the result that they don’t impinge upon the CPU socket to anything like the extent of the coolers on the E758. When we tested the E758 we were forced to install our Noctua cooler in a specific orientation to avoid fouling one of the chipset coolers. With the E760 Classified we could mount it however we liked.


While we’re in the region of the CPU socket the E758 has 8+2 power regulation hardware while on the E760 it is 10+3. There’s another unusual feature on the Classified as EVGA has installed two eight-pin EATX power connectors and claims that you can feed 600W into the board without any problem which sounds rather extreme. We don’t have a power supply with two eight-pin connectors but our Listan/Be Quiet did a fine job and appeared to power the Classified perfectly well. 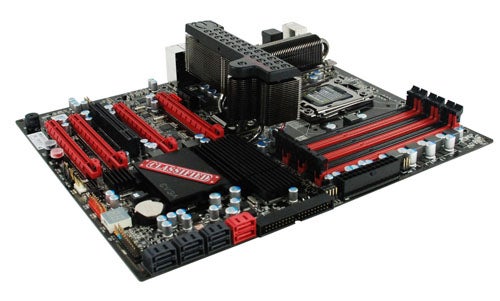 
Both models of EVGA overclocked to the same speed of 3.87GHz and delivered the same performance in 3DMark Vantage, PCMark 05 and Far Cry 2. The E760 Classified drew slightly more power under load however the passive cooling system worked admirably well and was considerably more civilized than the active cooler on the E758. Other than that the two motherboards were effectively identical.

Adding a second HD 4890 in CrossFire raised the performance in 3DMark Vantage but it didn’t help at all in Far Cry 2. This came as something of a surprise but we always knew we would have to use Nvidia graphics to investigate PhysX performance so we bit the bullet and switched from HD 4890 to GTX 280. Nvidia’s graphics drivers can shift the PhysX workload from the CPU to the GPU. The idea is that this is a more efficient use of the resources inside your PC and if you take this approach to its logical conclusion you can add a graphics card that is dedicated to PhysX.


This PhysX behaviour means that 3DMark Vantage can treat a suitable Nvidia graphics card as a pseudo CPU so installing a GTX 280 results in a leap in CPU performance in the benchmark compared to an HD 4890. Adding a second GTX 280 in SLI raises the GPU performance considerably but has little effect on CPU/PhysX performance. After that we added a third graphics card in the shape of a GeForce 8800 GT and used the graphics drivers to devote it to PhysX duties. This raised CPU performance by a small amount from about 48,000 marks to 50,000 marks or four percent. 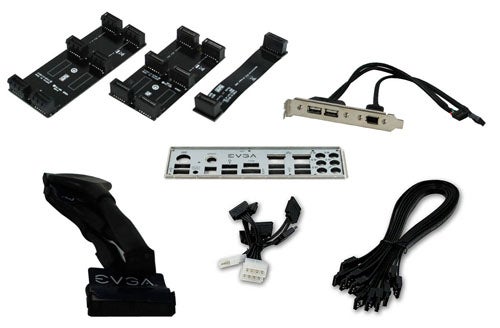 These results were clear to see in 3DMark Vantage but were quite invisible in Far Cry 2, although the benefits of SLI were quite evident.


The problem, from the point of view of the E760 Classified, is that the results were identical for both the E758 and the E760 and it seems rather steep to pay an extra £100 for the Classified when you don’t get any extra performance in return.


Of course the Classified has a trick up its sleeve as it has four graphics slots and not just three, so you can install a PhysX card in the third slot with another double slot graphics card in the fourth slot hanging off the bottom of the board. Unfortunately it will block the micro buttons and the Firewire header. In theory it would be possible if we had a third GTX 280, but we do not, and we suspect you don’t either.


Our view on the subject is that it would be rather pointless to install four graphics cards as the combination of Core i7 and three graphics cards is quite awesome. A fourth card for PhysX is not so much the icing on the cake as a light sprinkling of hundreds and thousands but the cost is very high and you’ll need a substantial stack of graphic cards and a beefy power supply to boot.


The EVGA X58 SLI Classified is a thing of beauty but the fourth graphics slot is something of a white elephant and the price is little short of scary.