Evesham Technology has a reputation for delivering good value, well-specified PCs and servers but it has also been very busy of late building up an impressive family of network storage products as well. It has a good selection of NAS (network attached storage) appliances with the latest SilverSTOR 500Q representing the entry point of this extensive portfolio.


The price looks comparatively high for an entry-level NAS appliance but the 500Q does come with Windows Storage Server 2003 (WSS2003) at the helm. This also includes the FalconStor Storage Server iSCSI (Internet SCSI) plug-in module which allows volumes to be set up as targets. These are accessed by remote systems equipped with a hardware or software iSCSI initiator where the drives appear as though directly attached. One feature Evesham has standardised on across its NAS appliances is storage as all SilverSTOR products are equipped with SATA hard disks. It’s easy to see why as this interface offers the best combination of performance, capacity and value. 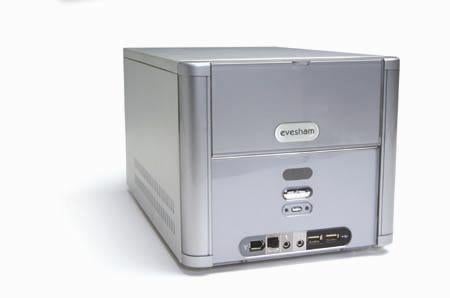 The 500Q is certainly a compact package although the sleek aluminium side panels are on the thin side and could easily be dented or damaged. On initial inspection it’s clear that it isn’t a purpose built NAS appliance and some investigation revealed it to be a Biostar iDECQ220T Mini-PC package – just like the Evesham e-Style PC we reviewed a while back. As the manufacturer has aimed this primarily at the consumer PC market it comes with a lot of baggage that will most certainly be wasted in its role as a network storage device. Features such as sockets for surround sound speakers, game ports, a header for S-Video output and S/PDIF optical connectors are totally wasted here.


On the plus side you get a 2.4GHz Celeron processor teamed up with 512MB of PC3200 SDRAM memory. Storage capacity is also looking good as the price includes a brace of Hitachi Deskstar 400GB SATA/150 hard disks and the embedded VIA SATA controller supports RAID-0 and RAID-1 arrays as well as individual drives. The system comes supplied with the drives configured as a mirror which provides good fault tolerance but reduces total capacity down to 200GB. You can’t add any more SATA drives as although there is room where the CD-ROM drive would normally go the motherboard only has a pair of interfaces. You can’t add another SATA controller card either as the only PCI slot is occupied by an Intel Gigabit Ethernet card.

Although the drives are fixed it’s not too difficult to remove them in the event of a failure as the lower one is located in a sled that can be withdrawn from the side once a single thumbscrew has been released and the mounting screws for the upper drive are also easily accessible. The four USB 2.0 ports come to the rescue for storage expansion as you can add more external hard disks as required.

Installation adheres to the NAS philosophy admirably as you simply connect the embedded 10/100BaseTX management port to the network and point a web browser at its default IP address. You can, if you wish, connect a monitor, mouse and keyboard and manage the appliance locally although you’ll miss out on a lot of the features offered by the secure browser interface. As always, we’ve found the WSS2003 web interface very well designed and simple to use making it easy to create volumes, set up network shares and determine access rights for users. You can restrict disk usage by implementing quotas, client support extends to Windows, Unix, Linux and Macintosh systems and the appliance can also be used as an FTP server.


For iSCSI usage note that the price only includes the plug-in component that allows volumes on the appliance to be declared as target devices – the snapshot, replication and mirroring features are not included. Creating iSCSI targets is a fiddly affair and the features on offer look overkill for the average small business. Portals and logical units, or iSCSI virtual disks, are created first and then systems with an initiator must log on to the appliance. These are then assigned to logical units which will appear to the remote systems as local hard disks that can be configured using the Windows Disk Administrator. We tested this feature using a Windows XP system with Microsoft’s initiator v1.06 software and found that it worked fine. The advantage of the FalconStor method is that only remote systems that have been declared to the appliance can access the iSCSI targets and you can set access permissions for each one.


Essentially, the 500Q is a direct competitor to Iomega’s 200d which is similarly priced and also comes equipped with Windows Storage Server 2003. Iomega’s build quality is far superior as the chassis is purpose built and its triplet of SATA drives are mounted in easily removable carriers. The iSCSI plug-in does add value to the 500Q but users unfamiliar with this network protocol face a steep learning curve. The bottom line is the NAS 200d is a better bet as a starter NAS appliance than the 500Q and if price is a top priority and removable drives aren’t important then Buffalo’s TeraStation is well worth a closer look.