Back in the early days of home computing there were a plethora of UK based PC manufacturers and system builders competing for your hard earned cash. Over the years many of them merged or were bought out by larger competitors, while others were just rubbish and rightly went the way of the dodo. However, one manufacturer has managed to stay competitive and independent after all these years.


Evesham Technology is a UK based manufacturer of desktop/server/workstation computers and notebooks as well as a reseller of miscellaneous peripherals and electronics items including sat-nav, headphones, and, LCD TVs. We receive a steady stream of its computers for review, including the first Vista PC we ever reviewed, and they’ve consistently proved a solid option for everyone from the budget constrained student to the gaming enthusiast – and that’s not to mention to the servers and notebooks. Well, today we have one of its newest systems in for review, the Solar 8600GTS. 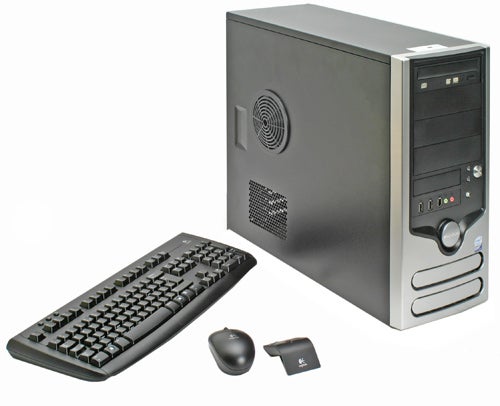 As you may have guessed, the 8600 GTS in the Solar’s name refers to the graphics card which it uses and also gives you a clue as to its projected market – gamers on a budget. This assertion is backed up by the inclusion of an Intel Core 2 Duo E6400 (2.13GHz, 2MB cache, 1,066MHz FSB) CPU coupled with 2GB DDR2 RAM running at 667MHz – both midrange components. Altogether these components should be capable of playing any current games at 1,680 x 1,050 (the native resolution of the included monitor) and will be able to keep up with any games that come out within the next couple of years. Rounding off the raw specifications is a 320GB hard drive, multi format dual-layer DVD writer, a set of Creative Inspire 3100 speakers, a cordless Logitech mouse and keyboard, and the aforementioned 22in monitor all included for the £899 asking price. Notable by their absence, however, are any Windows Media Center extras like a remote or TV tuner card; further emphasising the gaming, rather than multimedia, leanings of this PC. 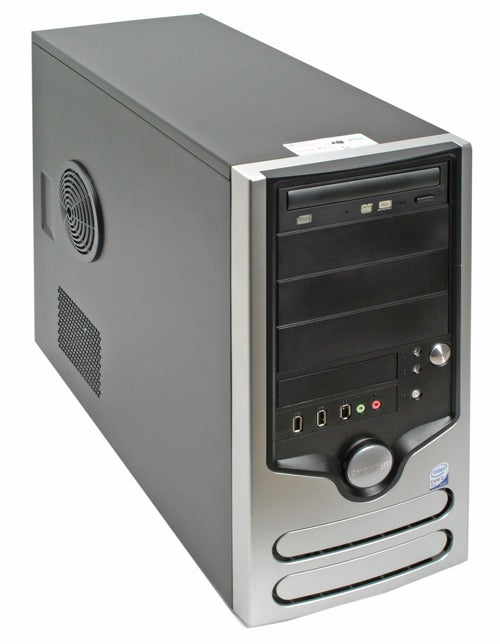 The entire Solar range comes with a choice of three chassis’, a silver and black mini tower, a ‘sleek design’ mini tower, and a sleek design midi tower all of which are the same price. The one I have here is the silver and black mini tower. The case is made from steel rather than lighter aluminium, as would be expected for a budget system, and is finished with a thin coat of tough black paint. The front fascia is all black plastic with some painted silver highlights. Across the bottom of the fascia are two inset strips that provide some ventilation for the lower part of the case. Two USB, one Firewire, and 3.5mm jack sockets for microphone and headphones can be found about half way up the front of the case – always a good place, as some people like to have these at the top while others prefer at the bottom, having them in the middle is a good compromise. The left side of the case houses two grills for added ventilation above the expansion ports and CPU. On the back things are pretty sparse – due to the lack of an additional sound card or tuner card – but there are still a few notable additions. First is the inclusion of a 120mm fan to suck air out the back of the case, this ensures the most airflow for the least noise. The second is a key lock that locks the removable side panel in place, which is always useful if you’re taking your computer to a LAN event or other public gathering. 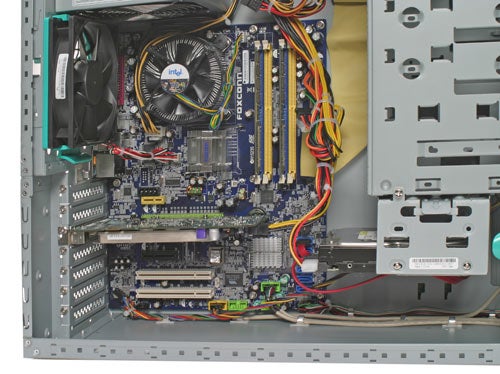 Moving inside the case we again see it’s quite bare but, of course, that means plenty of room for future expansion. The hard drive cage is removable and the front fascia has easy release tabs so upgrading is made slightly easier still. The motherboard is the same as the one in the previous Evesham we looked at, the Evesham Solar Storm 731. It is the Foxconn P9657AA-8EKRS2H, which is built around the P965+ICH8R chipset and has one PCIe x16 slot, six SATA II ports, one eSATA port, onboard HD audio, Gigabit Ethernet, and, Firewire support. The 2GB system memory comes courtesy of two 1GB memory modules so there are two spare slots available if 2GB proves too little.

The keyboard and mouse are another hangover from the Solar Storm 731 and they’re one that I’m much less happy to see. Sure wireless peripherals have their uses, but not for a gaming oriented machine. The mouse simply cannot keep up with intense gaming, end of story. Aside from my wireless gripes the mouse is also lacking in extra buttons for forward and back and I’m so used to using these buttons I simply cannot happily use a mouse without them. Also, the lack of a charger and reliance on having to swap out batteries is just a pain in the proverbial. On the plus side the keyboard is perfectly adequate and I was quite comfortable writing this article on it.


Building on this positive theme, the included speakers are a very capable 2.1 set from Creative. They will never compete with the more expensive sets out there but the sizeable sub keeps bass strong and well defined – the bass solo at the end of Love Rollercoaster by the Red Hot Chili Peppers was particularly enjoyable – and the two satellites do a good job of reproducing the mid-range and top end. Dialogue is also dealt with well so watching movies will be quite enjoyable on this system. A headphone socket on the left satellite is also a welcome addition particularly as the speaker volume knob also controls the headphone level. 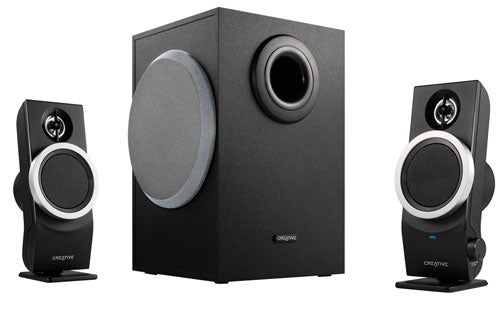 Continuing along the peripheral rollercoaster, the Solar 8600 GTS plummets right back to ground courtesy of the included IIyama monitor. At 22inches from corner to corner, there’s no denying the ample desktop real estate but with only a single VGA input, quality is simply not up to scratch with competitive equivalents. Text isn’t as sharp as should be and colours lack vividness. There is also significant compression at the white end of the scale resulting in light images becoming washed out. I’d recommend choosing the smaller 20″ Viewsonic 2030WM instead, as it has a DVI input, better image quality and is a tad cheaper. 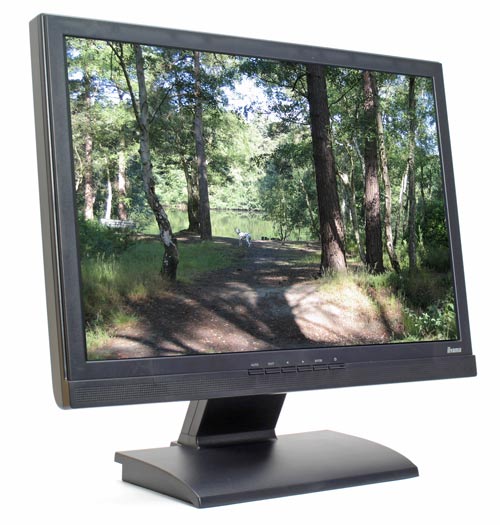 The software package that comes bundled with the Solar 8600GTS consists of Microsoft Works 8.0, Roxio Easy Media Creator 9, and, BullGuard anti-virus software which comes with three months free updates. Given the number of multimedia applications that come with Vista Home Premium you should have enough to get going with most tasks with even this basic bundle. Warranty covers the PC for parts and labour for three years with the first two years being on-site, while the last year will require you to send the PC back to Evesham for repairs. It’s this level of service that you’re paying for when you spend that little extra on a ready built system rather than building it yourself.


To test the performance of the PC we ran our usual set of 2D and 3D benchmarks. Our 2D benchmark consists of automating some everyday tasks in a single and multi-tasking environment and timing how long they take to complete, you can find a full explanation of each task here. We also run PCMark05 to compliment our own 2D benchmark. To test the graphics card I ran our usual set of gaming benchmarks. I’ve compared the results against our reference E6400 rig and the Evesham Solar Storm 731, for 2D tests, and our reference 8600 GTS results for the 3D tests. Our reference test bed consists of an Intel 975XBX “Bad Axe” motherboard, coupled with 2GBs of Corsair CMX1024-6400C4 running at 800MHz with latency settings of 4-4-4-12.


Looking at 2D performance first, it is clear that our VirtualDub test is very CPU bound and there is very little to distinguish the two systems. However, the other two tasks are much more dependent on the speed at which data can be fed to the CPU, therefore the faster memory on our test bed helped it to gain a noticeable lead over the Evesham. Even so, the Evesham should prove more than capable for most people’s everyday 2D tasks.


Moving onto 3D performance, the Evesham was quite capable of keeping up with all our test games at 1,680 x 1,050, all except for Company Of Heroes which only managed an average of 17.4 frames per second when anti-aliasing was enabled. However, as always our tests are run at absolute maximum in game detail settings so dropping back on some of these should allow you to find a playable framerate.


The Solar 8600 GTS has, for the most part found a perfect balance of components that should tackle everyday office/web browsing/photo editing tasks with ease as well as keep up with the latest games. However, there’s no question I’d swap the IIyama 22inch monitor for another one that uses a DVI connector and opt for a decent mouse. 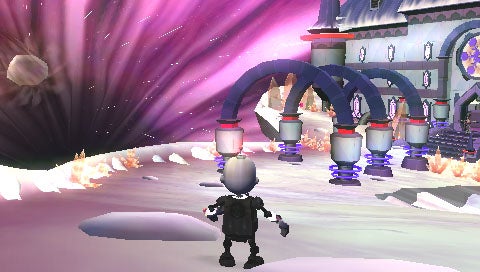