When a 42in flat-screen TV like Evesham’s Alqemi 42SX arrives at TrustedReviews costing under a grand, it’s fair to say it gets our attention. It’s just a pity that the rush of adrenaline from such price-focussed antics is usually swiftly followed by a feeling of hollow disappointment as spending quality time with a budget big TV finds us tolerating too many performance compromises for comfort. But hey – maybe this Evesham will prove the exception to this budget rule. Especially as its £999 price point is apparently a reduction from an original charge of £1399.


There’s certainly nothing particularly cheap about the way the TV looks. Its jet-black finish includes some neat bits of gloss for the inner screen frame and part of the stand, and this contrasts reasonably well with the matt finish of the outer chassis. The set’s sculpting could have been a bit more imaginative, but it’s certainly not ugly. 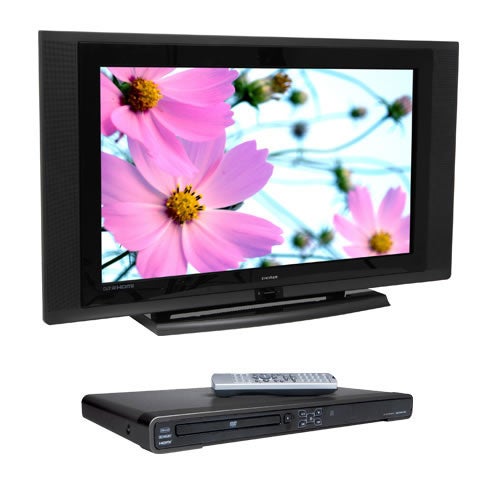 Connectivity quickly introduces a disappointment, however, as we uncover only a single HDMI input when really any HD Ready TV worth its salt these days ought to have at least two. We should say, too, that this HDMI doesn’t take 1080p signals – though we guess this is no great surprise on a £1000 product.


At least the set does carry a set of component video inputs for analogue HD sources such as the Xbox 360 console, a pair of Scarts, a PC input, and a CI slot that immediately alerts us to the presence of a digital tuner.


This digital tuner is supported by the Freeview 7-day electronic programme guide, and you can set reminders for upcoming programmes just by selecting them from the listings.


Searching for other features, it’s probably best to start by pointing out that the 42SX model we’re looking at is actually the ‘posher brother’ of a £900 ‘42S’ model. The extra ‘X’ in the 42SX’s designation is earned by the fact that it adds picture in picture tools and Dolby Virtual audio to the basic 42S specification sheet.

Another rather unexpected bonus with the 42SX is the fact that it ships with a free upscaling DVD player. The Evesham DVD1000 is a thoroughly decent upscaling (to 1080i) DVD player that would normally cost you £70, so it’s definitely a welcome addition to the 42SX package.


Elsewhere we find a film mode, multi-strength noise reduction options, a bass expansion circuit, and key claimed stats of 1000:1 for the screen’s contrast ratio, 500cd/m2 brightness output, good 8ms response time, and a native resolution of 1,366 x 768. Finally, folk thinking of hanging this Alqemi on the wall will be pleased to note that the necessary mounting kit is included in the box – something that’s certainly not true of many other large LCD/plasma TVs out there. 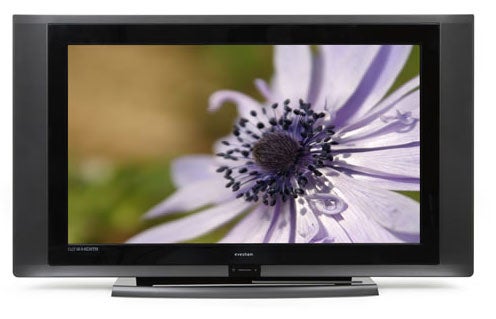 First impressions of the Alqemi 42SX’s pictures are pretty good. Kicking off with a simple standard definition feed of Sky News, tried through both an external Sky receiver and the built-in Freeview tuner, the Alqemi’s most notable strength is the vitality of its colours. They look richer and brighter than those of most budget LCD efforts, and in being so instantly catch your eye and deliver a sense of real solidity to what you’re watching.


Also surprising by budget LCD standards is how well motion holds up, irrespective of whether you’re watching standard or high definition. Even a full-tilt Giles Barnes during Derby County’s stunning televised rout of Colchester United failed to blur or smear. Come on you Rams…

The 42SX also looks slightly less noisy with standard definition sources than many large LCDs, with only a little exaggeration of MPEG processing noise letting the side down.


However, long-term viewing of the 42SX shows that none of these plus points can prevent the Alqemi’s picture from being really pretty average overall, for a number of reasons. The most bothersome of these is the screen’s black level response, which combines a slight unwanted greyness over dark areas with a distinct lack of shadow detailing. The result is that dark areas of the picture look hollow and flat.


Also irritating during our tests is how much the picture deteriorates during off-axis viewing. You really don’t have to watch from much of an angle at all before the picture loses considerable amounts of contrast and colour.


We also must say that although colours are rich and bright, they’re not always especially natural in tone, with skin tones in particular sometimes looking orangey and waxy.

Finally, while it’s certainly possible to see ‘the HD difference’ on the 42SX, HD images aren’t as emphatically sharp and detailed looking as we know they can be, leaving HD pictures sometimes looking more like ‘upscaled’ efforts rather than the real HD McCoy. It doesn’t help in this regard that HD pictures look a touch noisier than we’re used to as well.


Turning to the Alqemi 42SX’s audio, the speakers impress with the sheer volume levels they’re capable of putting out – especially as this loudness isn’t accompanied by any substantial amounts of distortion or cabinet rattle. There’s also plenty of audio detail to be heard in the mix, and the soundstage is dispersed around the room with gay abandon – especially using the Dolby Virtual mode.


Our only complaints are that a slight lack of bass to counterpoint the treble detailing can leave action scenes sounding a touch harsh, and that the Virtual Dolby mode can occasionally sound rather syrupy.


We really appreciate the effort Evesham has put into the Alqemi 42SX. It’s all too common for traditionally PC-oriented brands to just add a tuner to what’s basically a PC monitor and reckon they’ve made a TV. But here Evesham has delivered at least some of the sort of features and performance qualities that the AV market demands. That said, there’s really no getting round the fact that the picture quality is clearly a notch or two lower than that of the most accomplished dedicated AV brands.