Editor’s Note: At the time of publishing (ahead of the game’s official launch), Everybody’s Golf’s servers are underpopulated, making it impossible to judge the game’s online components. We’ll amend the review and score once we’ve had more chance to play with live players.

In a way, Everybody’s Golf has been to golf games what Mario Kart has been to the racing genre: the one with the cartoon graphics that puts fun ahead of simulation or authenticity, then goes on to pull ahead on sheer gameplay. Like Mario Kart, it’s also a little wary of innovation. New versions come and go, new wrinkles are added and taken away, but the core game goes almost unchanged across console generations. The EG that launched on PS Vita in 2012 would have seemed pretty familiar to anyone who’d played EG: World Tour on PS3 in 2008 or even the EG that launched on PS2 back in 2005.

That changes for this year’s PS4 version, and not just because the series’ developer, Clap Hanz, has extended its classic three-click system to cover putting. This is the first EG in years to take a big step forward and embrace the kind of connected, online-focused play-style we’ve seen take root in other sports games and genres. What’s more, EG has taken on aspects of open-world gaming and zeroed in on customisation. As a result, the new EG has a different feel to previous incarnations.

Don’t panic too much. It still looks much the same, mixing cartoon-style characters with very bright, colourful but also beautifully detailed scenery – the kind of scenery a mid-90s Sega might have put together, though enhanced with sumptuous lighting and 4K-ready textures. On the course, it also plays much the same, with simple aiming, intuitive displays and that classic, old-school three-click shot, where one click starts the meter moving, the second sets power and the third defines accuracy. 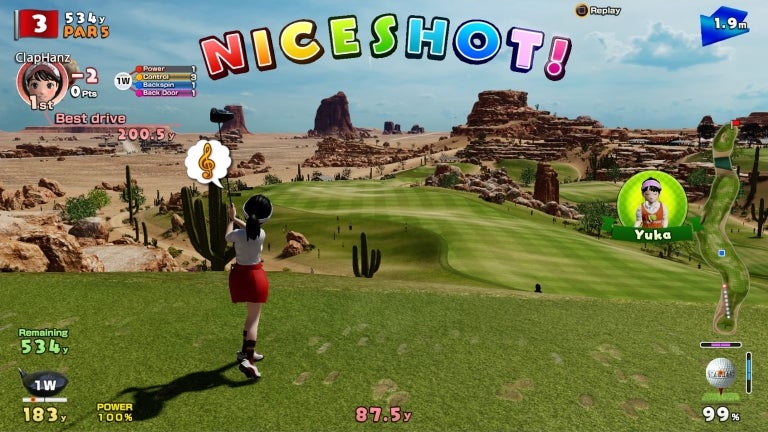 And this is a fun game, designed to keep you hooked over the long haul. As you play you actually level up your clubs. Hitting a long drive or chipping close to the pin will see your skills with the relevant clubs rise, and as these skills are specific to a certain set of clubs – each with its own strengths and weaknesses – you’re encouraged to try different sets for different courses. Your choice of ball carries a similar weight, while novices will find early perks like giant-sized mega cups for easier putting, or even tornado cups that draw wayward balls in from a distance.

In fact, on the basic mechanics, the new EG is hard to fault. It’s an accessible, fun but challenging golf game, where the competition gets tougher as you move up the ranks. Both the long game and the short game are entertaining, and it feels like a game that wants you to improve, testing your skills without making you feel any task is impossible.

Nor are its more ambitious new additions a waste of time. Instead of a set of disparate, unconnected courses we have a series arranged around a central Golf Island hub, where you can select tournaments and take on periodic versus matches against a CPU challenger, or simply wander around, driving your buggy and perhaps indulging in a fishing minigame. 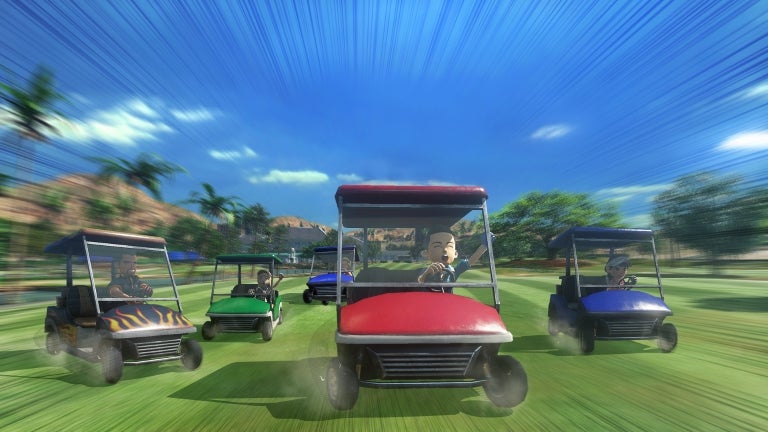 Head online, meanwhile, and you can walk or drive around the whole course, meeting other avatars, using emotes, joining up for a quick round or simply playing each hole one-by-one for a spot on the leaderboard. The game has strong character building and customisation options, and you’re constantly earning new clothes, hairstyles, voices and even animation sets through the single-player mode. You can also get stuck into the team-based Turf Wars mode, where two teams vie for domination over as many holes as possible on the course.

It’s hard to judge anything much given the low to non-existent player base pre-release, but there’s potential for some cheerful, breezy, golfing laughs. That is even if the way game progression works threatens to cause balance issues, just because the players who put the most hours in will have the most effective clubs.

And if you’d rather enjoy some good old-fashioned sofa multiplayer, that’s fine too. You can play with up to four players using just the one controller, and it’s still arguably the best and funniest way to enjoy a round. 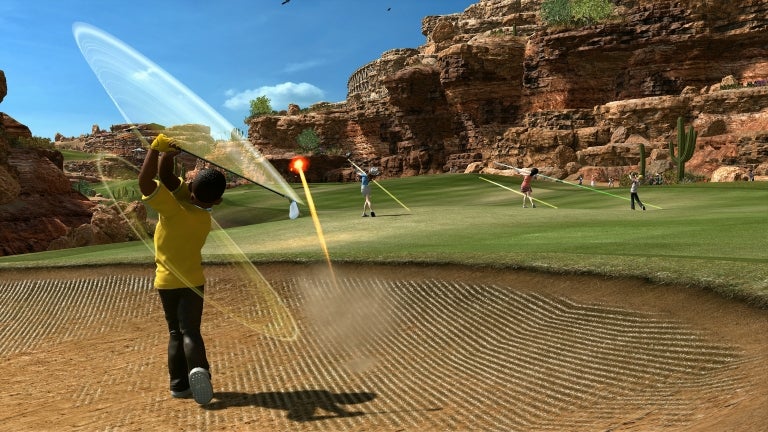 First, I’m not 100% impressed by the visual design. I’d argue that both the PS3 and PS Vita versions had more style and personality, and it’s not helped by the swapping of the artist-designed characters for user-built, customisable, Mii-style characters, which tend to look less detailed and a little generic.

More seriously, if EG has adopted a few ideas from the MMO and open-world genres, then it also seems to have adopted a level of grind. To unlock all the fun stuff – buggy driving, fishing, the chance to play on anything beyond the first course – you have to rank up your golfer through a series of tournaments. For each rank, that means defeating three versus characters in different one-on-one matches, and to get to each of those you need a podium place in two or three tournament matches. That takes serious amounts of time.

This alone isn’t the problem, and those versus characters help keep things interesting by challenging specific areas of your game. What is the problem is that the game spends the first five or six hours with you playing variations of the same Eagle City front and back nine. By the time I’d finished moving from rank two to rank three I was sick and tired of them. And this seems clumsy. There are five really interesting courses here, taking you from alpine scenery to Western spectacle to a tropical island paradise. Why keep players hammering away for hour after hour at the same eighteen holes? It just turns a fun golf game into a grind. 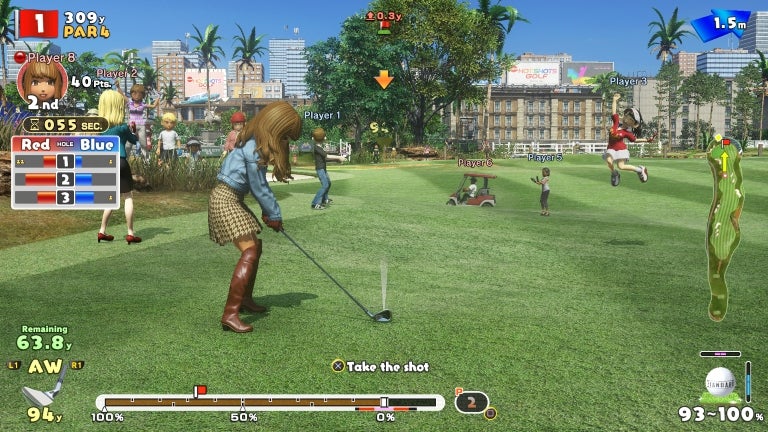 If so, it’s still worth the effort. Much as the new EG seems determined to lock its best features behind a series of gates, the fun can’t help seeping out. Just as you’re growing tired, you’ll unlock a new course or a new feature that draws you back in, while there’s plenty of potential on those free-roaming online courses. It’s just a shame that – at this point – I can’t give a more overwhelmingly enthusiastic recommendation, with the new EG driving effortlessly onto the fairway only to smack the ball into a water hazard on the second shot.

Everybody’s Golf looks good and has the same fun, breezy feel as previous versions, combined with intriguing online modes and a surprising amount of depth. The new open-world, online focus creates a new energy in what has always been a conservative series.

On the downside, it’s very grindy in its early hours, locking off a lot of the fun stuff until you’ve put a good ten hours into the game. Hardcore fans may not worry – it gets better the more time you put in – but it’s weird that this most accessible of golf games is less of a crowd-pleaser than it deserves to be.