Let’s face it, if you were making a list of ten good reasons to buy a PSP it’s unlikely that Everybody’s Golf would be on it. Ridge Racer and WipEout Pure? Definitely. Virtua Tennis and Lumines? Probably. Medievil and Spider-Man 2? Well, let’s hope not. But Everybody’s Golf? Would you really buy the hottest gadget around then want to squander your time and money on a cutesy Japanese golf game? No, I didn’t think so. 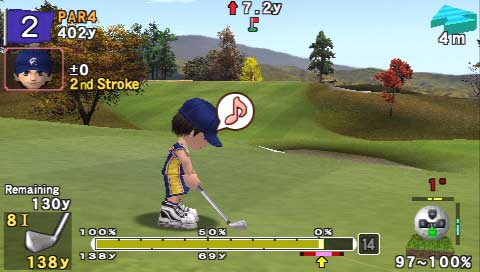 But then Everybody’s Golf is one of the unexpected pleasures of PSP ownership. It hasn’t the glamour of the killer-app racers or the intense thrills of Virtua Tennis and Lumines, but then it plays a very different sort of game. It’s a chill-out classic, a winner for long train journeys or hours stuck in the departure lounge, and the sort of game that was made for rainy, hungover Sundays on the sofa.


Of course, this being a Japanese golf game, you have to have a certain amount of stomach for all things cute. If spiky-haired teenage louts and mini-skirted anime girls have no space on your golf course, then you’d better sit back and wait for Tiger Woods to turn up, because they are out in force here. The same goes for the manga flavoured special effects when you hit an especially good ball, the cheery little shouts of encouragement when you play well or score a bogey, and the way your player skids into view as the camera tracks your latest shot to its conclusion. If you want a realistic, dignified, smart-trousered, Pringle-jumpered game of golf, then clearly you aren’t included in the titular Everybody. 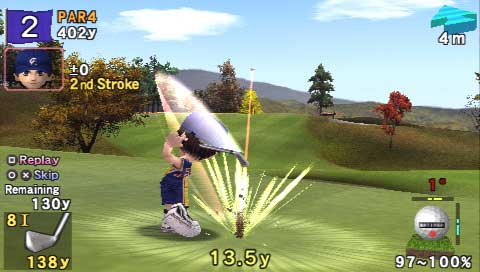 Everybody else will love it, partly because all the cutesy stuff actually makes it a more entertaining game to play. The game has two main single-player modes, a standard Stroke Play mode for a straightforward round on a course of your choice, and a Challenge mode. The Challenge mode incorporates a number of one-on-one matches and tournaments, and by winning these you can unlock new costume items, characters, clubs, special moves and ¬– most importantly – stars. Win enough stars and your player goes up in rank, meaning a new course and another set of challenges open up. In other words, you have goals that go beyond merely lowering your handicap. 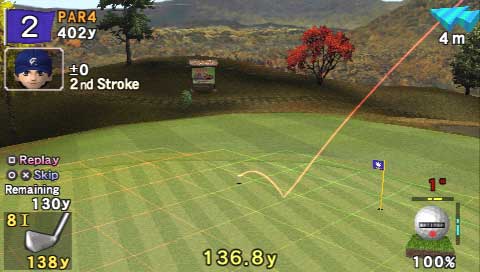 And another little cute point – you can choose which character to play with, and the more you play with one character, the more their big, heart-shaped loyalty gauge will fill up, and the better they will play for you. It’s odd, slightly sickening, and yet weirdly lovable at the same time. Let’s face it, you could play as Tiger Woods for years at a time, and never get the sense that he appreciated your cup-winning efforts.


In terms of basic gameplay, Everybody’s Golf hits it just about perfect. The standard-issue three click system isn’t going to confuse anyone familiar with computer golf, club selection is a doddle, all the information is there at a glance, and you can get a good view of where the ball might (hopefully) end up at the touch of a button. Even putting isn’t a disaster, as the traditional undulating grid on the green is helped along by a height profile display and some neat moving highlights that give a more detailed idea of the terrain. Trust me – even your most doddering relative could probably get to grips with this one. 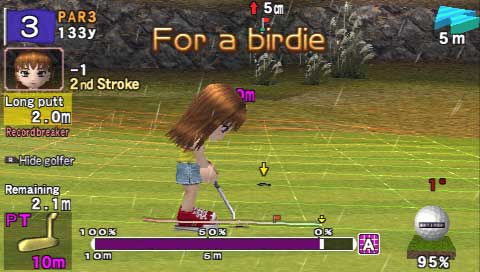 However, Everybody’s Golf also has a few tweaks for the advanced ‘power-player’. A little work with the D-pad during the shot, for instance, adds spin to the ball in the appropriate direction, while a little extra welly can be added (on a limited basis) by pressing the square button before you take your shot. Take your time and practice, and you’ll soon be doing the sort of trick shots that amaze other players.

Now don’t let this put you off, but you will have a LOT of time to practice. One of the few niggles I have with Everybody’s Golf is that it perhaps takes a little too much effort to get anywhere with the game. Just one course at the off seems slightly stingy, no matter how nice the opening Alpine effort is, and it’ll be a good few hours of play before you complete enough challenges to open up the next one. Even then, you’ll have plenty of time to admire the autumnal Japanese setting, as the holes are noticeably harder and the Challenge competitions become more difficult. With six holes to unlock, you won’t be zooming through this one in a hurry. 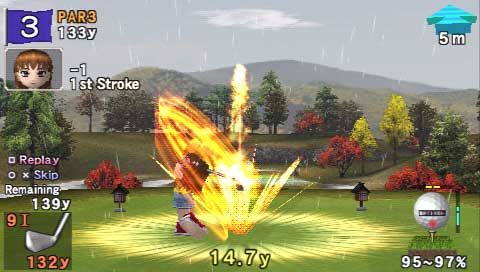 Still, that’s kind of a good thing, isn’t it? Particularly when the gameplay is so enjoyable that you won’t really mind playing the same eighteen holes over and over again. Perhaps it’s the presentation – the colourful cartoon graphics, the excessive camera movements that would make Michael Bay scream “enough”, the chirpy birdsong in the soundtrack – but there’s something about Everybody’s Golf that stops you getting too angry when you have to play the same nine holes for the fifteenth time. Admittedly the music can push the sweetness factor way past sickly, but you can always turn the volume down when that wave of nausea hits.


Which leaves me with only one other complaint. WiFi multiplayer is all very well and good if there are some other PSP owners around, but if there was one game that was built for two-player action using one PSP, then this was it. So why is there no option to do so? All the same, the multi-player option is very sensibly arranged, so in the unlikely even that you can find eight other players on the 7:15 to London Paddington, it won’t take long to set up a game. 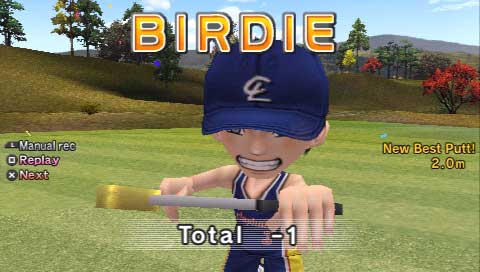 So there you have it; it’s good, clean, instant fun, but it’s also got the legs to carry it for many months to come. It even has some of the least obtrusive loading times on the PSP! It’s a shame that the perfect summer game only arrived once the summer was already ending, but why not buy it now at any rate. After all, you might find yourself still playing it when July rolls around next year.


Looks too cute for words, but plays a surprisingly mean game of golf. Even if you take the game seriously, you’re guaranteed to have a good time.