Barbecuing with the Everdure by Heston Blumenthal 4K is far easier than with comparable models thanks to good design and plug-in power, giving you a way to automatically light the charcoals and temperature probes to monitor the cooking. However, the built-in connectivity and companion app need more work to fulfil their potential. There's no getting away from the high price, either. Yet, if you barbecue a lot and want perfect results each time, this model is well worth the money.

Cooking outdoors on gas can feel like less authentic than the barbecue experience of glowing hot coals and a smoky flavour, but the ease of it is a big plus. However, the 4K unites convenience and flavour. It’s a charcoal model but with automatic ignition, meaning you can pop in the fuel, plug it in and walk away to come back to a barbecue almost ready to cook.

The barbecue is packed with other clever functionality, too – a well-insulated body that keeps the exterior from becoming too hot, the ability to add coals from the side without disturbing your dinner and meat probes combined with temperature gauges that’ll make sure meat and poultry are thoroughly cooked. Plus it’s probably one of the most stylish, modern barbecues you’re likely to meet. Everdure by Heston Blumenthal 4K barbecue – What you need to know

Whether you’re an experienced barbecue cook or a novice, the Everdure by Heston Blumenthal 4K barbecue delivers

If you’ve ever walked away from a charcoal barbecue wondering why they can’t be easier to use, then know that the 4K has been designed with you in mind. Virtually every niggle has been dealt with including the hassle of trying to ignite it or defaulting to a chimney starter, topping up coals without removing grill racks, trying to cook veg and meat at the same time without incinerating either, and figuring out whether food is done without having to open the lid.

The first issue has been solved by what’s essentially an electric hotplate below the charcoal. After adding it, you close the 4K’s lid, push the ignite button on the touchscreen and leave it to heat up and light the charcoal. There wasn’t a huge amount of guidance as to how much charcoal to start with, and the instructions in general leap about a bit rather than taking you through step by step. Even so, the BBQ ignited the first time and didn’t go out.

To keep the coals going, a neat porthole in the side of the barbecue allows you to add chunks of charcoal below the grill without disturbing it. It’s not a huge hole, so larger pieces won’t fit through, and the tongs provided for doing so can be tricky to use accurately (a few pieces I added ended up far away from the lit coals and were hard to grab again), but I still found it easier than removing grills with food on them. The porthole seals with a twist-in cap – something I forgot to replace once or twice, so a flip-down or attached cap would’ve been handier. The porthole on the side of the barbecue allows you to top up the coals inside, without disturbing the grills

Unlike most barbecues, the 4K comes with four half grills – two enamel, two stainless steel – with the latter able to be raised up away from the coals to prevent food catching or being grilled too quickly. What’s useful here is that as half grills, they can be mixed and matched or swapped out during cooking.

There’s also an internal light so you can check on food more easily at dusk or on cloudy days. However, it’s probably the probes that are the most useful and set the 4K apart – there are two built into the barbecue itself and four removable meat probes that connect to a socket at the rear of the grill area. Between them, it was easy to see the internal temperature of the barbecue as well as gauge the progress of individual items. There are a couple of areas that could use a tweak – the lid locks into place and has a button release, for example, so you’ll need two hands to open it, plus the glass display is difficult to read in bright sunlight. There’s also no shelf to put anything down on, though there are hooks for tools. 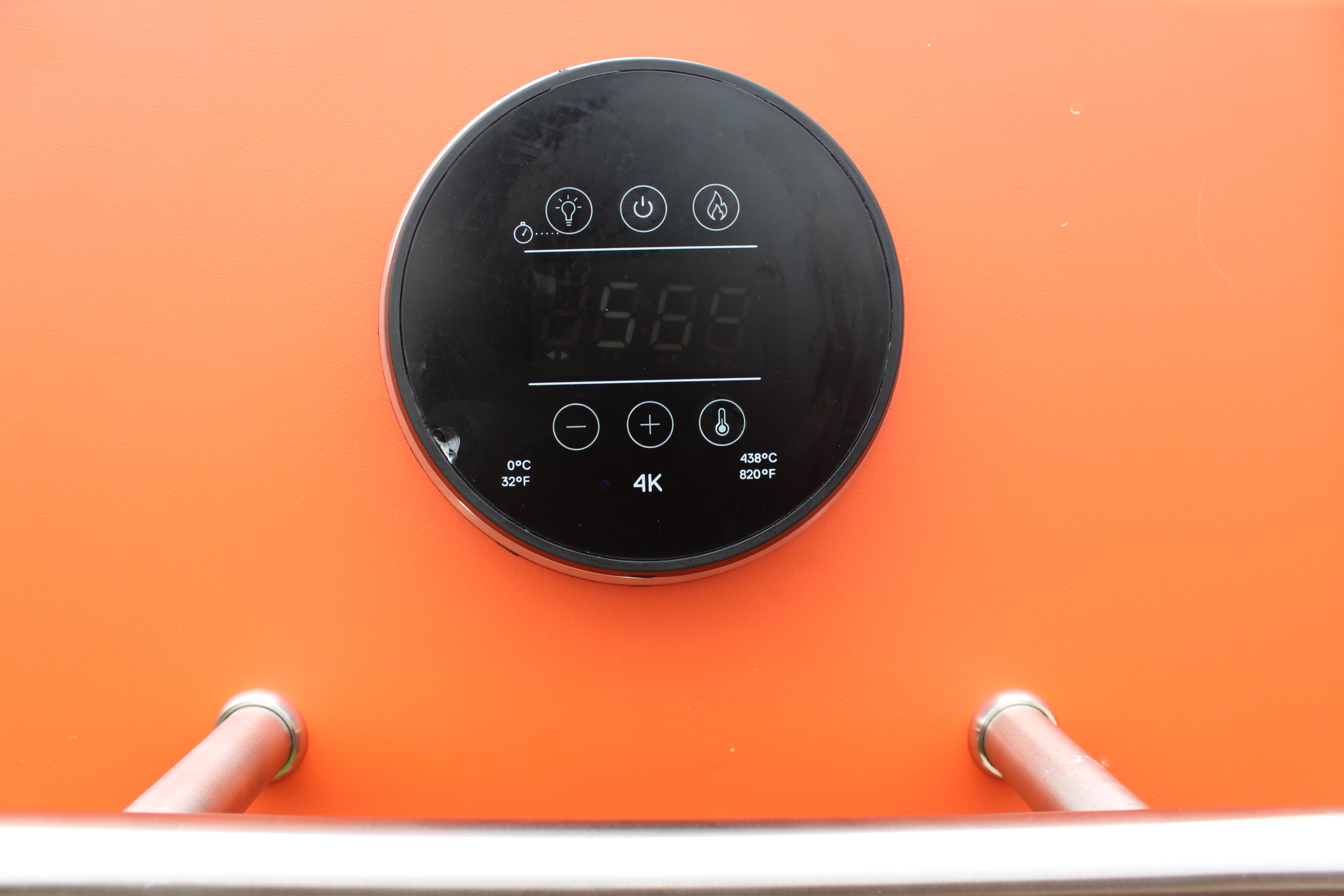 The barbecue’s glass display looks good, but can be difficult to read in bright sunlight

In theory, you can monitor cooking from your phone, but in practice, the app’s a work in progress

While it’s not a must to use the barbecue’s Bluetooth-connected app to control it, the idea of doing so is appealing – you can monitor progress from each removable probe, follow recipes or set a programme of cooking time and temperature for different types of meat. However, despite this potential, the app is buggy and, at the time of testing, only available for iOS, so Android users will have to be content with using the barbecue’s touchscreen.

While I was able to connect to the 4K without any issue, the app struggled to find individual probes and its unreliable nature meant I soon gave up using it to monitor them. Not only did each cooking programme reset if my phone’s screen locked, the expected Bluetooth range of 10m seemed to be much shorter – moving just a few metres away resulted in it losing the connection. Fortunately, the touchscreen was straightforward to use – the only issue here was that it’s located on the lid, so when that’s up, you can’t read the temperature display. 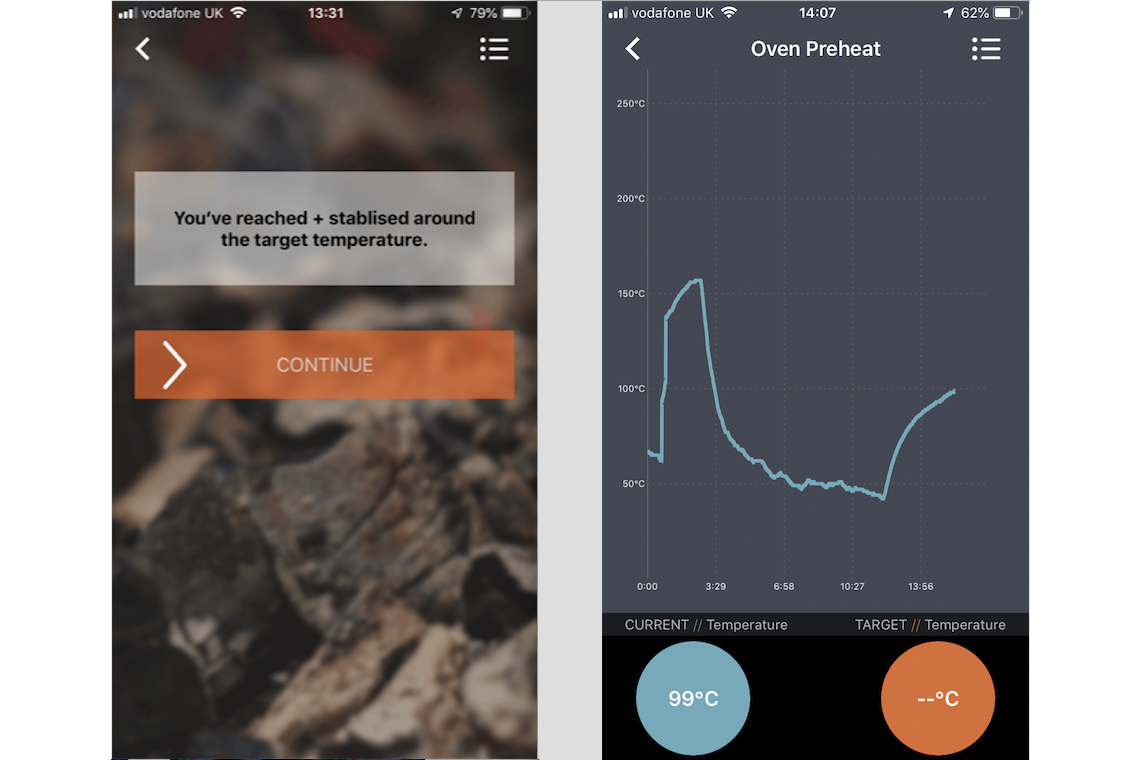 While the idea of the app is great, in practice it’s not the easiest to use

Should I buy the Everdure by Heston Blumenthal 4K barbecue?

As one of the most expensive stand-alone charcoal barbecues available, with only a few large models outpacing it, such as the Big Green Egg 2XL at £2,500, or a Kamado Joe Big Joe III, around £2,250, the 4K is one you’ll need to save up for. The benefits it brings are clear, though – almost every wishlist feature has been ticked off. If you’ve previously avoided charcoal barbecuing because it seems daunting, or you’re not getting the results you want, the easy appeal of the 4K could justify the price.

Barbecuing with the Everdure by Heston Blumenthal 4K is far easier than with comparable models thanks to good design and plug-in power, giving you a way to automatically light the charcoals and temperature probes to monitor the cooking. However, the built-in connectivity and companion app need more work to fulfil their potential. There’s no getting away from the high price, either. Yet, if you barbecue a lot and want perfect results each time, this model is well worth the money.

Next
Cooking and Cleaning Review