What is the Eve V?

There have been plenty of ‘disruptors’ in technology in recent years. The most commonly known is probably OnePlus and its range of smartphones that can go toe to toe with more expensive and well-established rivals. Eve wants to achieve similar success with its latest Eve V hybrid.

It’s being billed as a less expensive Microsoft Surface Pro and, like the OnePlus phones, is a device that delivers plenty of bang for your buck. Specs aside, you get both a keyboard cover and stylus thrown in – these are optional extras from Microsoft. 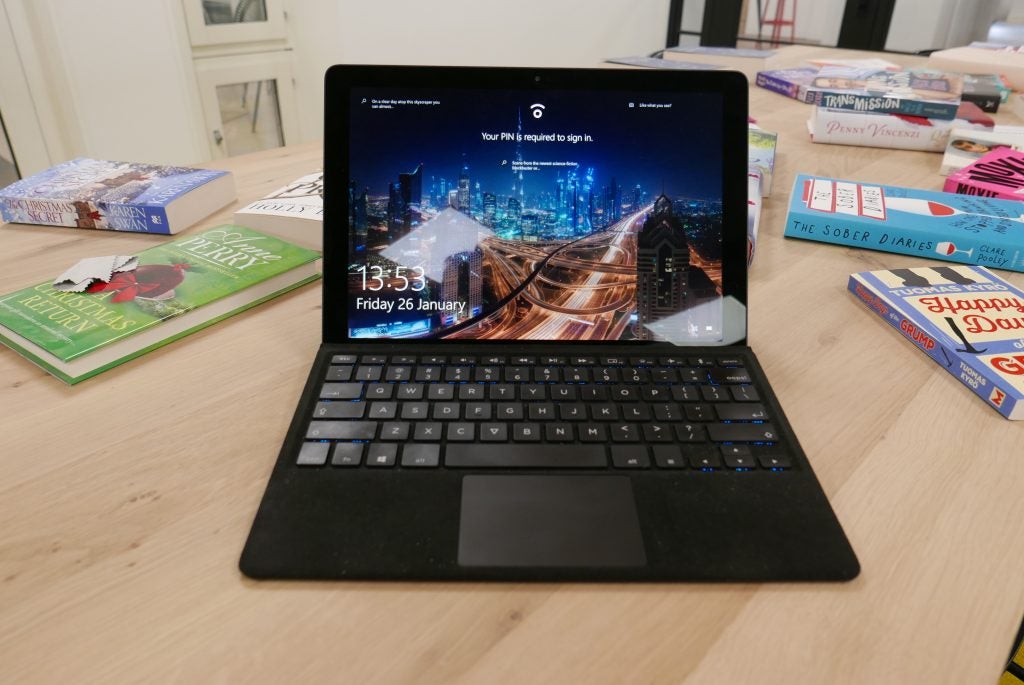 The parallels with OnePlus don’t stop there. The community aspect is also similar, with Eve having taken input from its prospective customers during its crowdsourcing efforts before deciding on this device’s final features and specifications.

But the Eve V is a first-generation device and, as a result, while it manages to challenge the status quo – and that’s something worth getting excited about – it’s not quite perfect.

The Eve V tablet is made of sand-blasted aluminium that feels both robust and premium. It is, however, a little on the weighty side at 925g. A top-spec latest Microsoft Surface Pro weighs 784g. The Eve V is also thicker, measuring in at a slightly tubbier 8.9mm than the 8.4mm New Surface Pro. This combination of minor issues make it feel a little less comfortable to use as a tablet.

On the rear is a kickstand that allows for 135 degrees of adjustment. The material used feels a little unrefined, however. The edge feels sharp and harsh to the touch, like a blunt knife. I’m sure you could use it to slice through a block of Parmesan.

The metal also makes a horrible sound as it scrapes across the surface of your desk if you go to adjust the laptop’s position. The exposed hinge is unattractive and feels like a design oversight. It’s these little things that make the Eve V feel like a first stab, rather than a refined product. 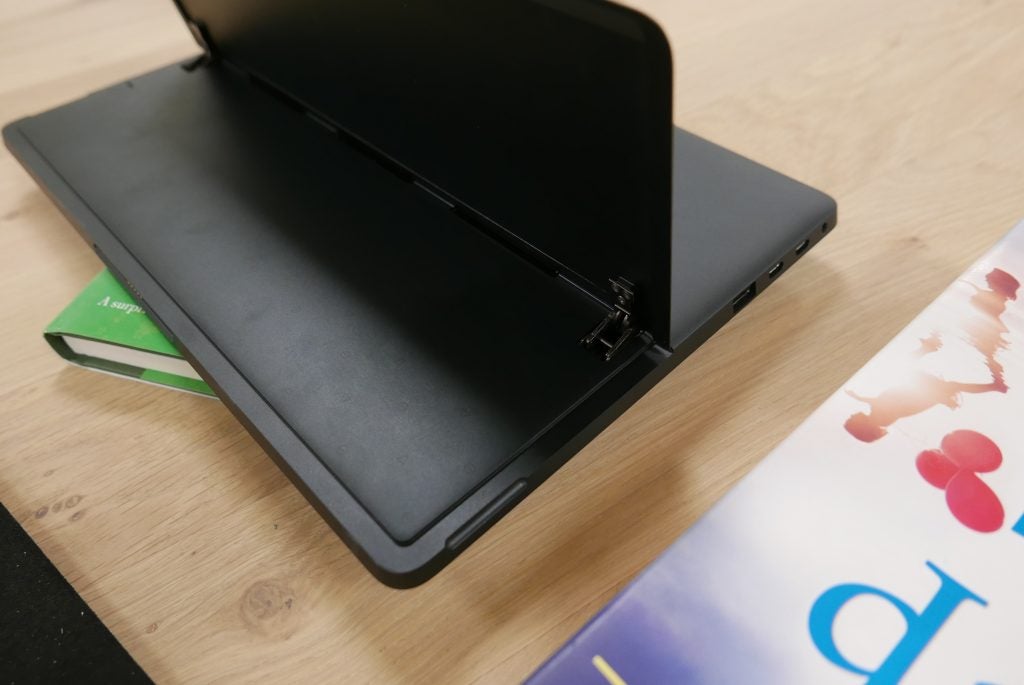 What Eve has gotten right is the sheer number of connections afforded to you. There are two USB-C ports, one of which supports Thunderbolt 3.0. Both can be used for charging. As an aside, the USB-C-to-USB-C cable provided with the wall charger is a very generous length.

You can also plug in a USB-C-to-HDMI adapter for connecting an external display. This meant I could use the same adapter I use as a travel dock for a Nintendo Switch and with a Samsung Galaxy Note 8. Sometimes standardised ports are a wonderful thing.

The two USB-C ports are also supported by two more full-size USB-A 3.0 ports – justifying the extra thickness – as well as a headphone jack and microSD slot. The latter is discreetly tucked away behind the kickstand, so can be easily missed. The Surface Pro, by contrast, comes with just a single USB 3.0 port, mini-DisplayPort, microSD slot and headphone jack. 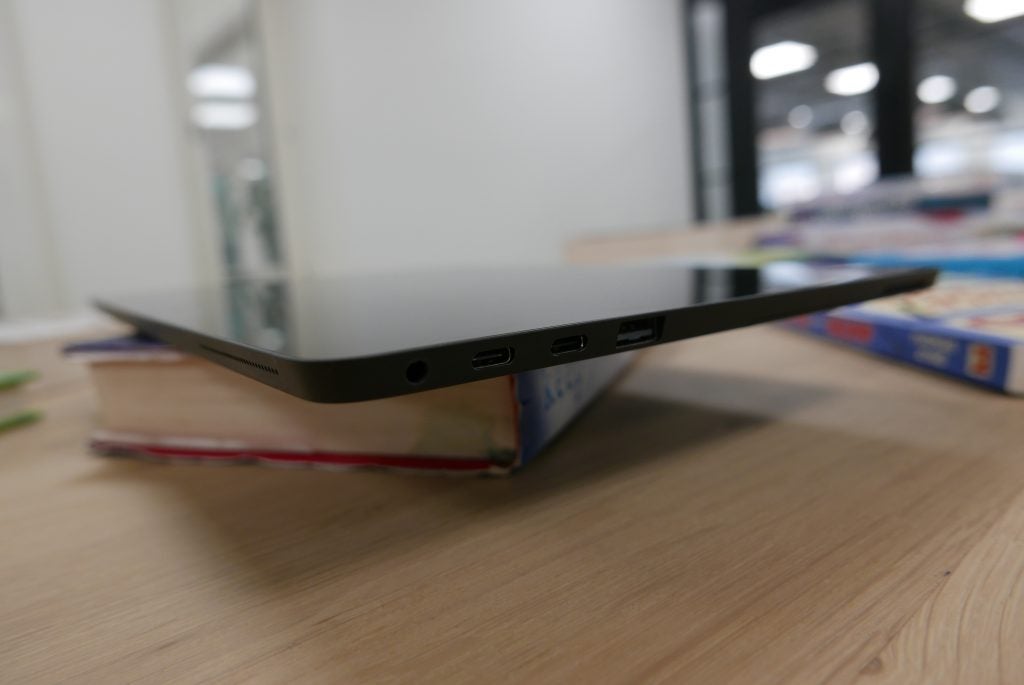 Again, though, there are some minor build issues. One of the USB-C ports on my review Eve V has a distinct click when a cable is inserted, while the other doesn’t. One one occasion I must have not inserted the charging cable sufficiently or it came loose, because I returned to a laptop that hadn’t charged at all to much frustration.

I contacted Eve and it turns out this is a known issue. Newer units are being sent with a charger cable with a slightly longer head that will apparently fix the problem. Also, the USB-C port has been made slightly tighter on newer production models, so hopefully there’ll be fewer charging woes. 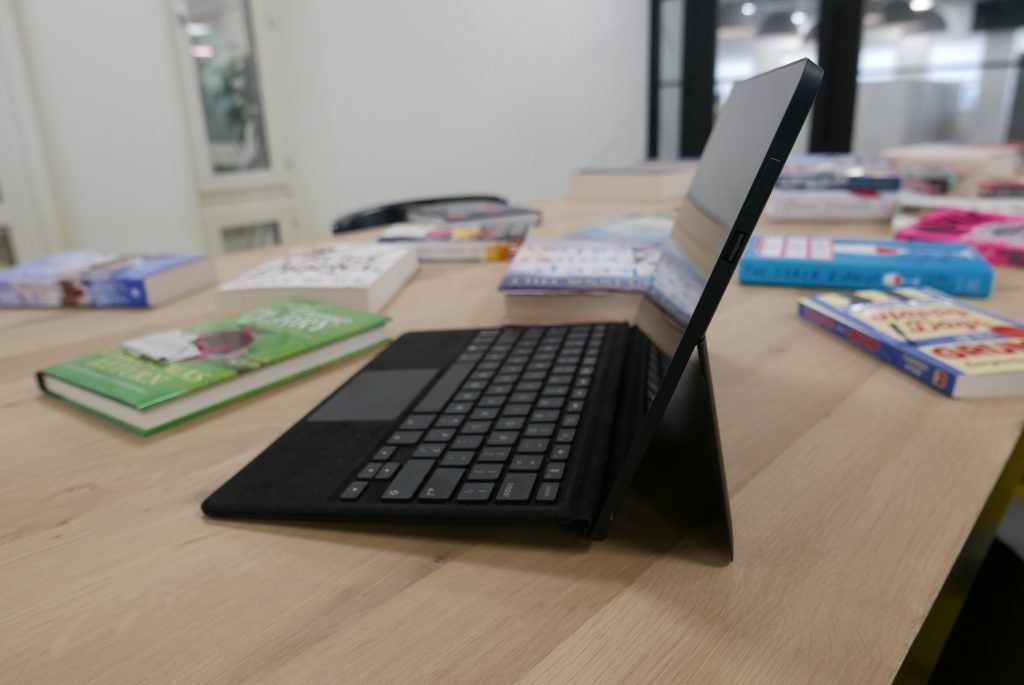 Along the edge of the tablet component you’ll find a power button that hides an integrated fingerprint scanner for Windows Hello. It’s a nice addition and makes for a swift sign-in. I found it registered fingerprints without many issues, too. Below that is a volume rocker, which sits a little too flush for my liking. It also has a similar feel to the power button, so it can be easy to confuse the two at first.

Regardless of which Eve V configuration you opt for, you get a keyboard cover and stylus included. The keyboard cover has an alcantara cover to it, which feels really nice. However, it picks up crumbs and dirt like no one’s business. I constantly found myself having to scrape off debris from whatever surface I rested it on.

The keyboard also has two backlight brightness levels and seven colours you can cycle through. Apparently this was one of the most demanded features from the Eve community. It’s a welcome inclusion, truth be told. 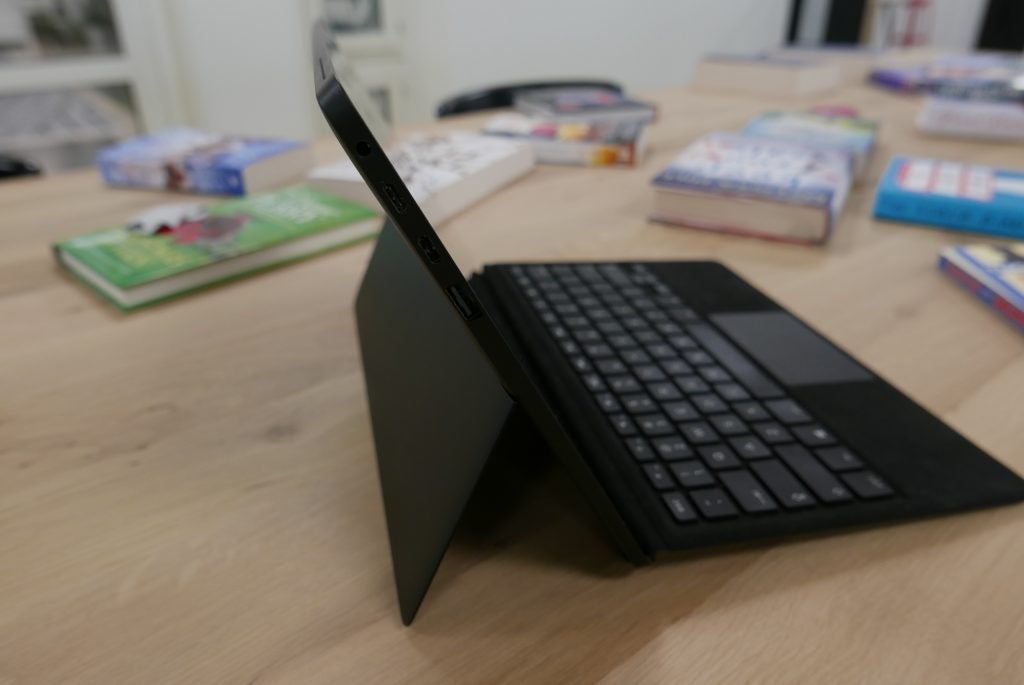 The keyboard cover snaps onto the tablet securely with a strong magnet, but that still didn’t stop me tipping the whole assembly when I attempted to use the Eve V on my lap a few times. A 2-in-1 probably wasn’t the best idea for using in a busy and cramped CES press conference, in fairness.

The keys themselves have a nice amount of travel for a keyboard cover, and the whole assembly only has a little bit of flex, so each key strike feels responsive.

One element of the keyboard that’s proven divisive, however, is its backspace key. Instead of the standard arrow denotation or even the word ‘backspace’, Eve has chosen to label it ‘oops!’. On top of that, the ‘V’ key has been re-labelled with the Eve logo (which itself is an inverted triangle). 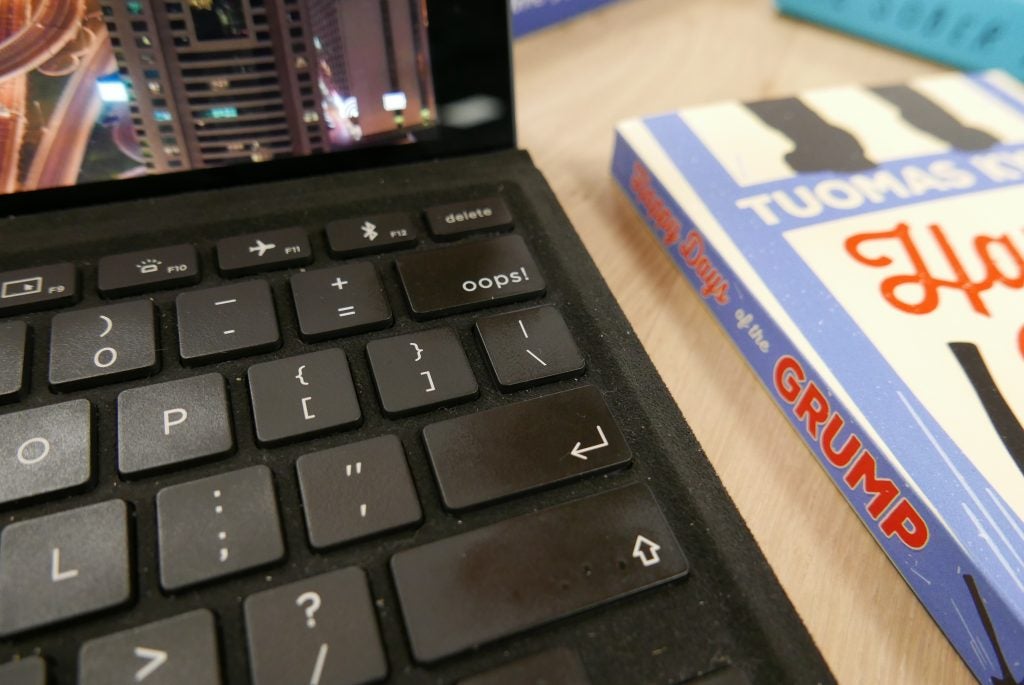 The keyboard is unique, but you’re either going to find it whimsical or obnoxious. There are references to Eve’s taking on the established players elsewhere, too, such as the boot-up splash screen that reads ‘made for us’ to inspire a feeling of revolution every time you power up.

The touchpad is Microsoft Precision certified, which is typically a good sign that it’s not going to be a pain to use. With real-world use it is responsive, but very occasionally attempting a click will make the cursor move away from your intended target or initiate a click and drag. I’m a sucker for larger touchpads that leave you plenty of space to swipe and scroll away, but the Eve V’s is only a moderate size. 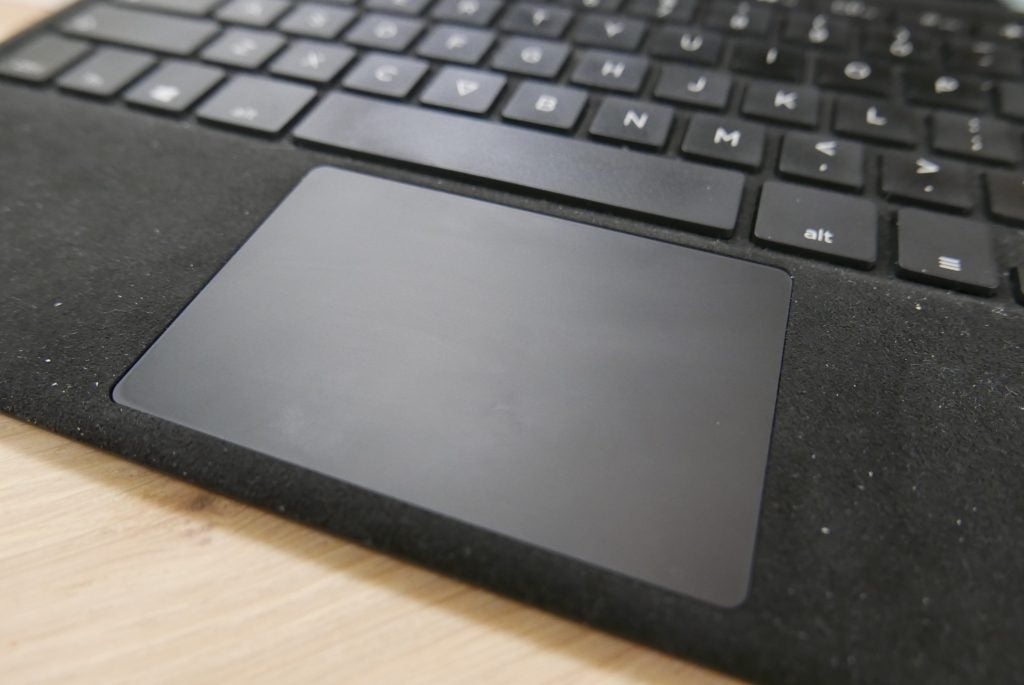 The included stylus is fine for general note taking but it’s not going to check any boxes for serious digital artists. It only has 1024 points of pressure, so isn’t as sensitive as the Samsung Galaxy Book‘s jotter or the Microsoft Surface Pen that both have a whopping 4096 pressure points.

Eve released updated drivers during my test period that helped with some of the pen’s accuracy, so it’s good to see ongoing support and improvements. 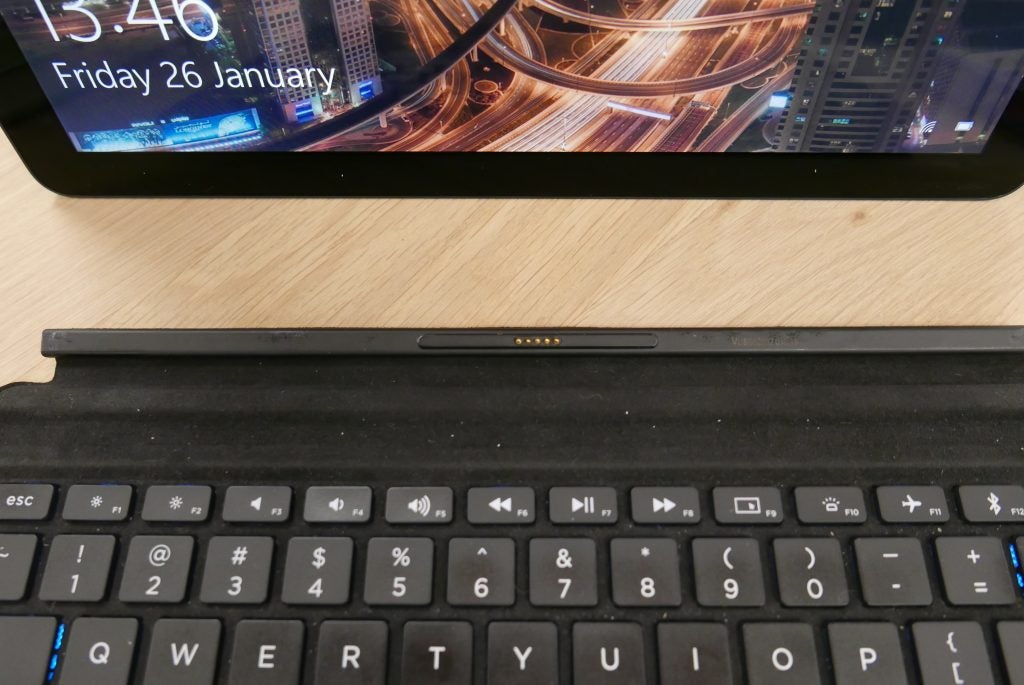 The stylus can magnetically attach to the side of the display while you’re using it, but you’re not going to want to keep it there when stowing away, as it’s almost guaranteed to come loose and go missing. It’s a little annoying then that there’s no permanent place for it to be kept safely, but this is a complaint I’ve had of many a stylus over the years.

The Eve V’s IGZO screen has a resolution of 2880 x 1920 pixels spread across a 12.3-inch display. It makes for a wonderfully crisp and sharp image, and at 418 nits in brightness, it’s one of the brightest convertibles I’ve laid eyes on. Blacks are decently deep at 0.29 nits, and the contrast ratio of 1408:1 adds some welcome punch to the picture.

The display makes light work of displaying the easier sRGB colour gamut, managing 99.1%, but it doesn’t fare as well with Adobe RGB, of which it only covers 72.8%. Alongside the less sensitive stylus, it might rule the Eve V out for more picky graphic design professionals. 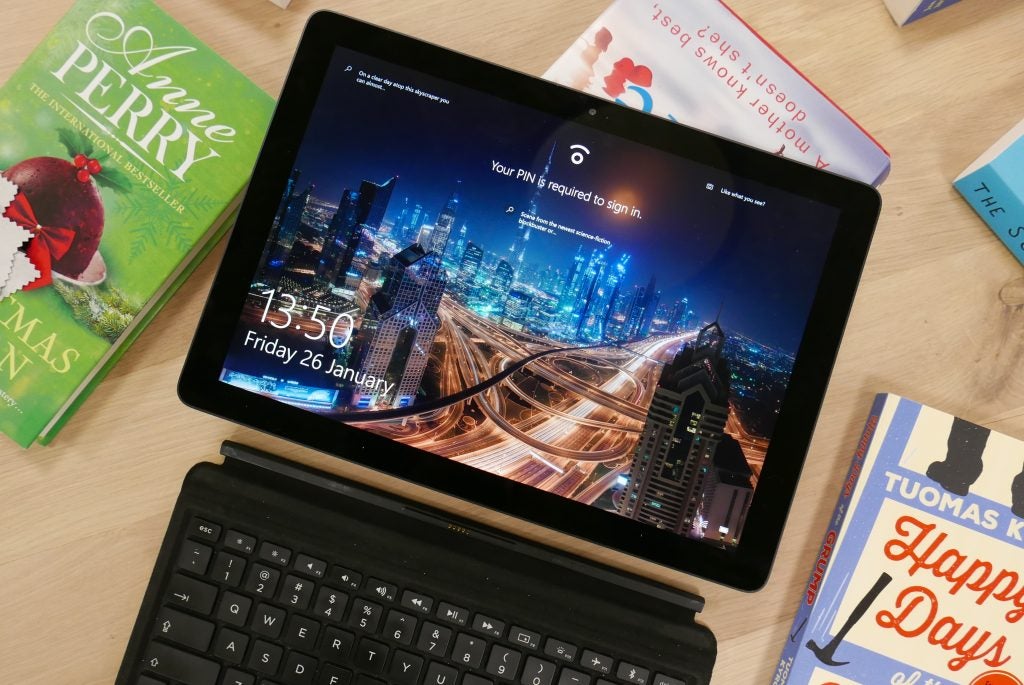 The display’s Delta-E measurement of 2.17 puts it on a par with the Samsung Galaxy Book (where lower is better), which goes to confirm the colours aren’t the most accurate.

But numbers aside, between the Eve V’s high contrast, high pixel count and high peak brightness, you’re left with a display that most users are going to find well above average and arguably better for consuming media with some added panache. The higher resolution also greatly improves the tablet experience with the screen closer to your eyes.

Sound quality is respectable, with the dual speakers reaching surprisingly loud levels, but they still sound a little thin. Again, this is something that Eve has tweaked with driver updates, so it’s possibly another area that could improve over time. Even then, expect to plug in some headphones if you want the best listening experience.

The Eve V is available in a multitude of configurations, from a 7th Gen Intel Core m3 all the way up to an Intel Core i7. The configuration I was sent to review was the second highest, comprising an 1.6GHz Intel Core i7-7Y75 (part of the Kaby Lake family), 16GB of DDR3 RAM and 512GB of SSD storage. The only difference from the higher spec is more storage at 1TB.

In day-to-day use the Core i7-7Y75 didn’t struggle with regular productivity tasks and a few more intense tasks like running Photoshop. It’ll handle some light video editing, too, but don’t expect to work with 4K content unless you’re feeling patient. 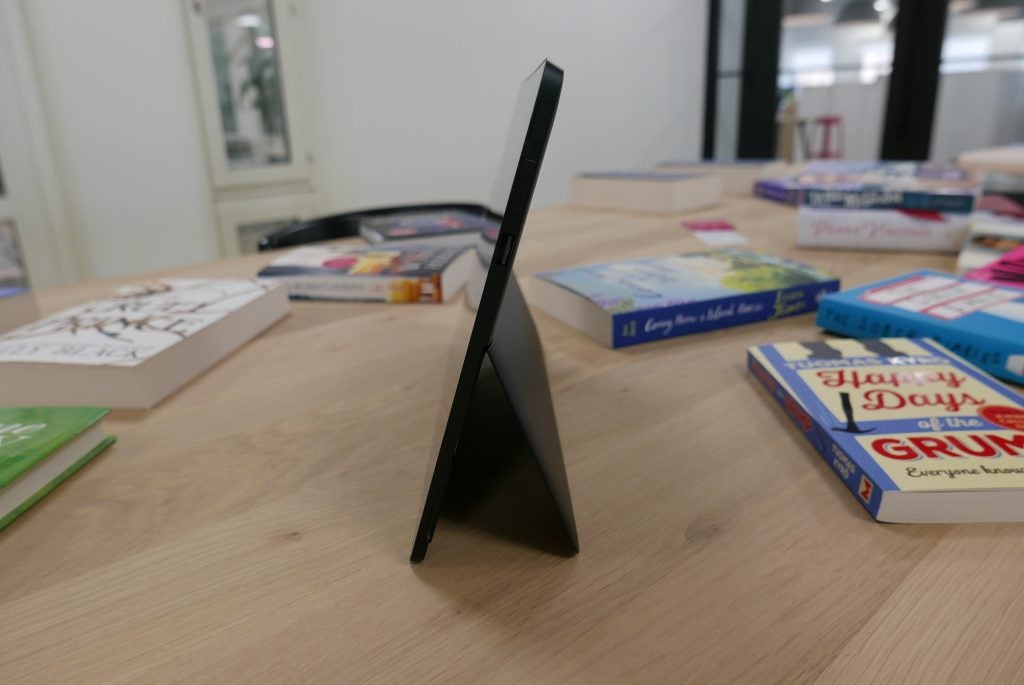 But otherwise you’re not going to experience any stutters or slowdown and the generous 16GB of RAM dealt with lots of open tabs without frustration.

Boot speeds are also nice and fast, and the SSD proves to be quick with read speeds of 1406.6 MB/s and write speeds of 572.8 MB/s in Crystalmark.

Performance in our synthetic benchmarks, however, puts the Eve V behind both the high-spec New Microsoft Surface Pro and Samsung Galaxy Book.

Under more intense load, the Eve V also gets noticeably warm across the back of its chassis as a result of its fan-less design, but it does at least mean it’s silent.

Used with a degree of consideration, the Eve V proved to be a great productivity device for getting work done while on the move. You can get some very light gaming in, with Minecraft running fine but again you’ll need to keep your expectations in check regarding the Intel HD Graphics 615’s capabilities.

I found the Eve V’s battery life to be respectable but unremarkable when compared again to the likes of the New Surface Pro and Samsung Galaxy Book. Running our synthetic benchmark that loops 10 minutes of web browsing and 5 minutes of video playback with the screen set to 150 nits, it lasted just shy of 6 hours.

Contrast that result with the New Surface Pro (8 hours) and the Samsung Galaxy Book (10-11 hours) and the Eve V comes up short. Having said that, under less strenuous use, I found the Eve V could just about get me through a standard 9-5 working day away from the mains with some considered battery management. I define a standard working day as mainly web browsing,  document editing and the occasional YouTube video to break up the day.

Why buy the Eve V? 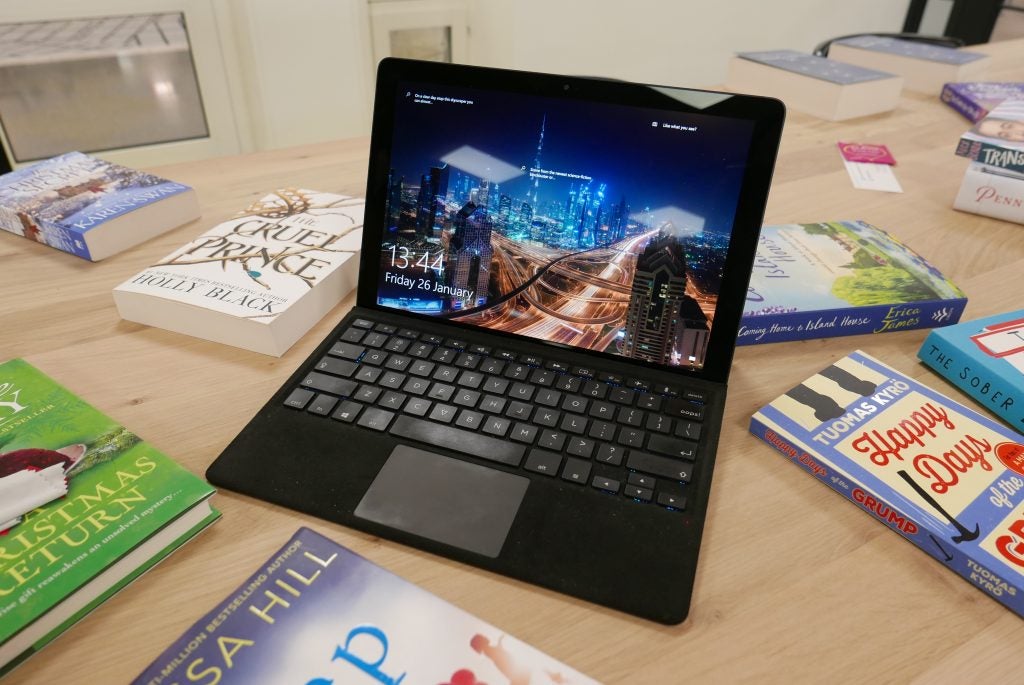 If you’re looking for a decently powerful convertible but don’t want to sacrifice ports and connectivity, the Eve V is a solid all-round choice. While it’s overall performance and battery stamina might be behind some rivals, I feel like the multitude of ports goes some way to make up for it as a productivity workhorse.

The Eve V also proves to be good value with the inclusion of its versatile keyboard cover and stylus thrown in to sweeten the deal. There’s not a lot to dislike overall, with just a few build issues to take off the overall sheen.

Otherwise, the Eve V manages to tussle with the big boys and that’s great news for everyone. Just be sure to act fast if you’re dead set on one, as the current ‘flash sale’ retail approach might prove to be a hurdle (but also supposedly how Eve keeps the cost low).

A great-value convertible for anyone who finds dealing with dongles a headache.