With its high-resolution sensor, the Eufy Video Doorbell 2K is a great choice for those who want a smart doorbell but without having to pay monthly subscription costs. It's well priced and comes with great detection features – and, thanks to the separate security hub, it benefits from a strong wireless signal. Being able to upgrade the 16GB of storage would be nice, and I found night footage to be a little soft. Otherwise, this is a well-priced doorbell, and a great alternative to subscription-based models.

Its high-resolution 2K video, simple app and a handful of advanced features make the Eufy a great doorbell for those who don’t want any associated ongoing costs.

Eufy Video Doorbell 2K (Battery-powered) – What you need to know 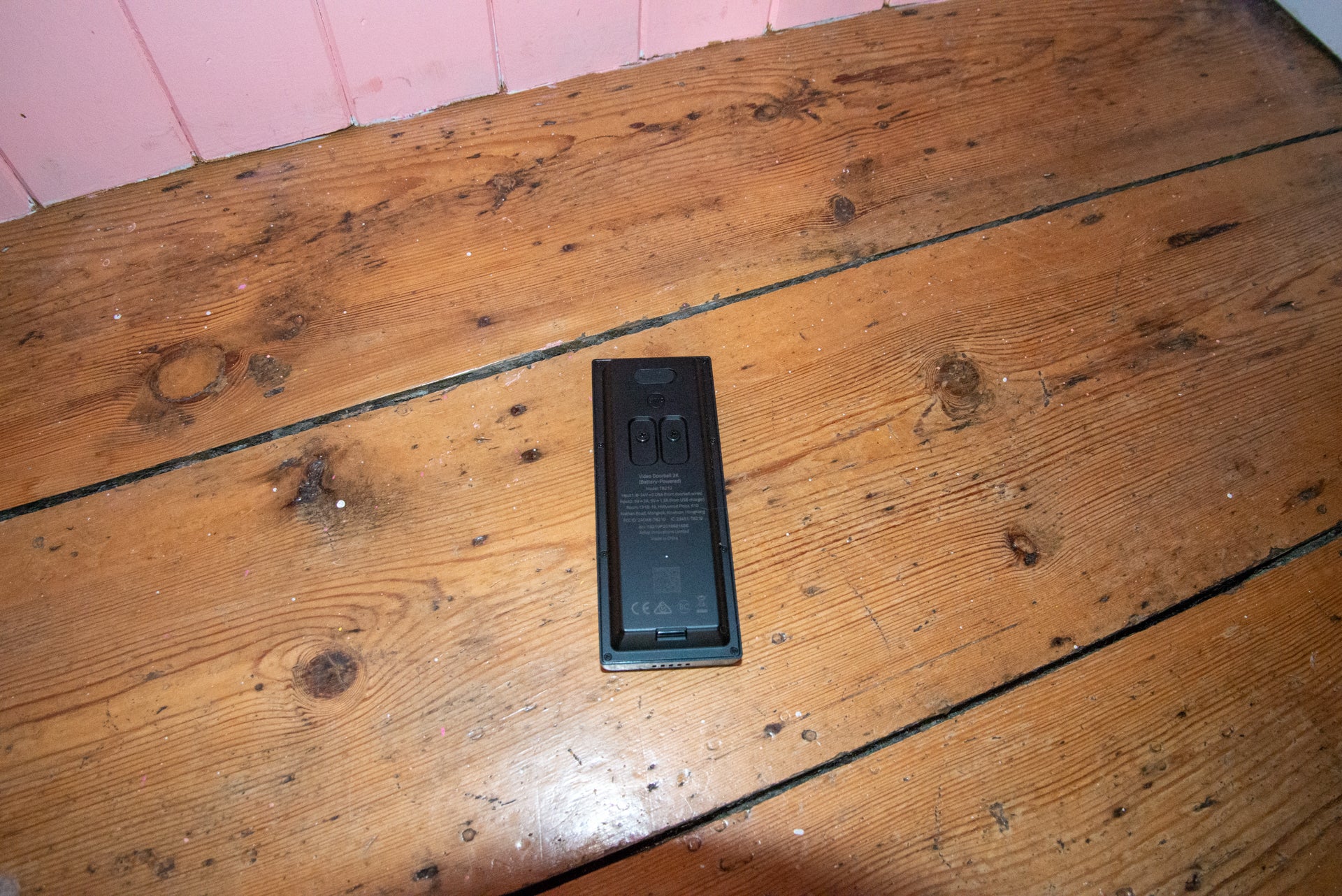 Although the chunky battery means that the doorbell is larger than the mains-only competition, such as the Nest Hello, the Eufy Video Doorbell 2K is tall and narrow, so it should fit on most doorframes without issue.

There’s no removable battery here, so as is the case with Ring models, you’ll have to remove the entire doorbell to charge it via the micro-USB port on the rear.

Although this model is wireless, it doesn’t connect to your home network. Instead, it connects to the Eufy HomeBase, a small hub that plugs into your home network via Ethernet. The disadvantage of this is that you’ll have another box lying around; but the advantage is a dedicated wireless connection, which proved to be very strong and stable throughout testing. 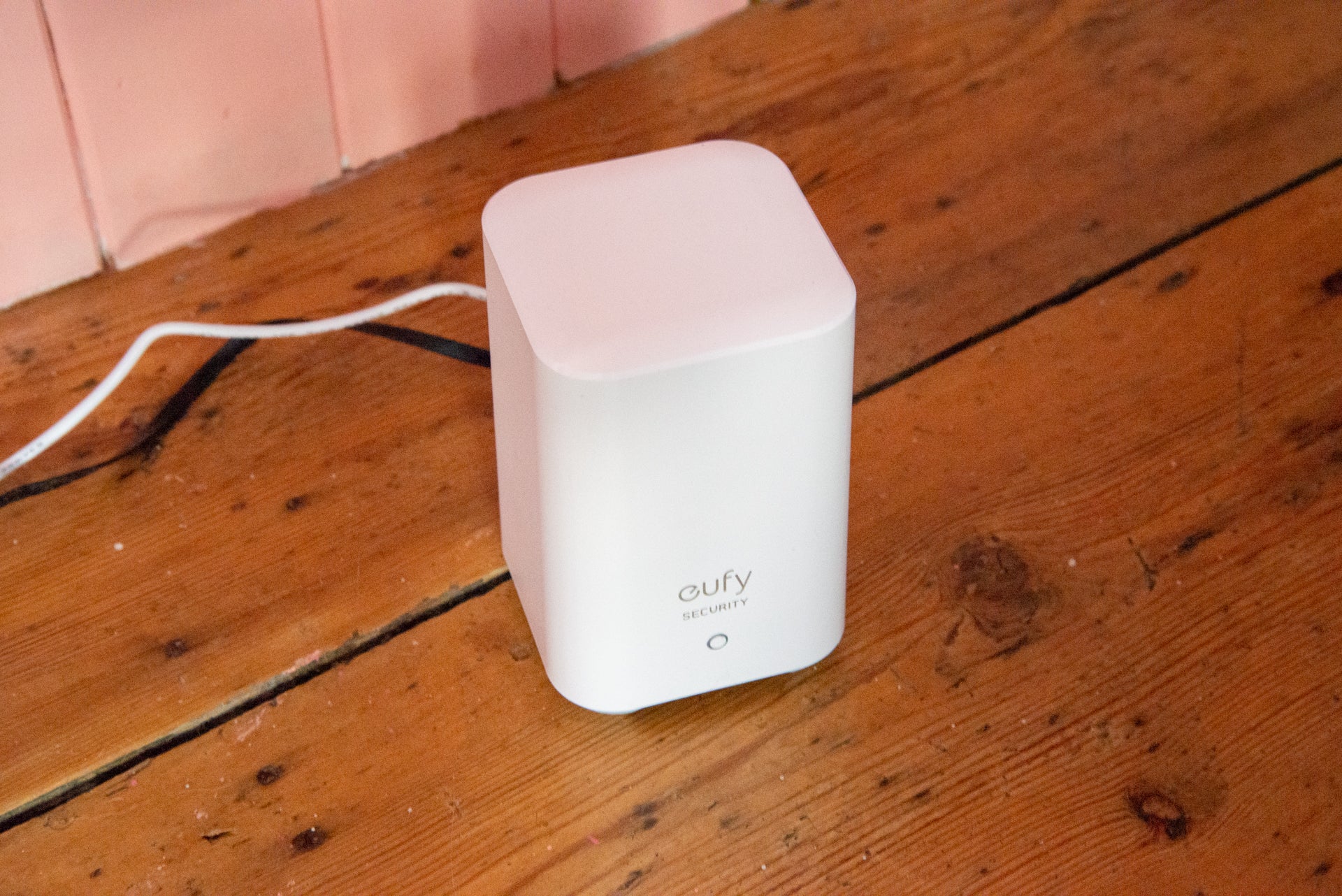 The HomeBase to which all your footage is recorded comes with 16GB of storage. And since the HomeBase will be located inside, it means that even if the doorbell is stolen, your footage remains safe.

It should take only around 30 minutes to get this doorbell set up and connected to the Eufy app for the wireless installation; a bit longer, if you’re going to go for a wired installation.

Fire up the Eufy Security app and it looks much like other doorbell and security camera apps, with thumbnails for all of your devices. The Eufy Video Doorbell 2K shows a thumbnail from the last triggered event.

Tap the play button and you jump into the live view part of the app, where you can see what’s going on, and trigger a snapshot, recording or enter the two-way chat.

One of the biggest irritations of battery-powered devices is the number of alerts sent to your phone. Fortunately, Eufy has got the basic balance right and provides tools to further fine-tune detection.

First, you can set the motion sensitivity, dialling it down if you receive too many alerts, or up if you find that it’s missing some. I found that the basic level was good enough for me. Next, the doorbell is set to detect humans only, although you can tell it to detect all motion if you want to capture more. As well as detecting humans, the camera has facial detection, but not recognition. When someone approaches the door, video footage features a thumbnail of a face, so you can see clearly who was calling. Finally, you can add activity zones to focus on the areas of the image that are most important. This is usually a feature reserved for wired cameras, and is often only available as a paid-for extra.

Getting the settings right for my front garden, I found that the Eufy Video Doorbell 2K didn’t worry too much about people walking in front of my house; generally it only pinged me as people approached the front door. If you don’t want notifications regarding motion, you can turn this off in the app.

Since this is a doorbell, the main way that you’ll use it is when someone presses the button. This triggers the doorbell to ping your phone, and ring the HomeBase. You can choose from a series of ringtones for the HomeBase, but just make sure it’s kept somewhere you can hear it, since it isn’t that loud. Notifications came through quickly: faster than with Ring’s battery-powered doorbells.

There’s support for Amazon Alexa and the Google Assistant, letting you view the live stream from any smart displays you have in your home. And, you get a bonus with the Alexa skill: you can have the doorbell ring your Echo speakers, although you can’t answer at the moment.

For now, then, you’ll need to use the app to talk to people. Or, you can use the quick voice responses to send an automated message. If you do want to talk to people, I found the video and audio feeds clear and easy to understand.

Both rings and motion detection events are saved to the HomeBase’s integrated 16GB of storage. There’s no way to upgrade this amount, and the 2K footage is quite large, so you’ll get around two weeks of footage. If you hook up other Eufy cameras to the HomeBase, then you’ll seen that storage allocation disappear even faster. An upgrade to let you expand storage via USB is in the works. 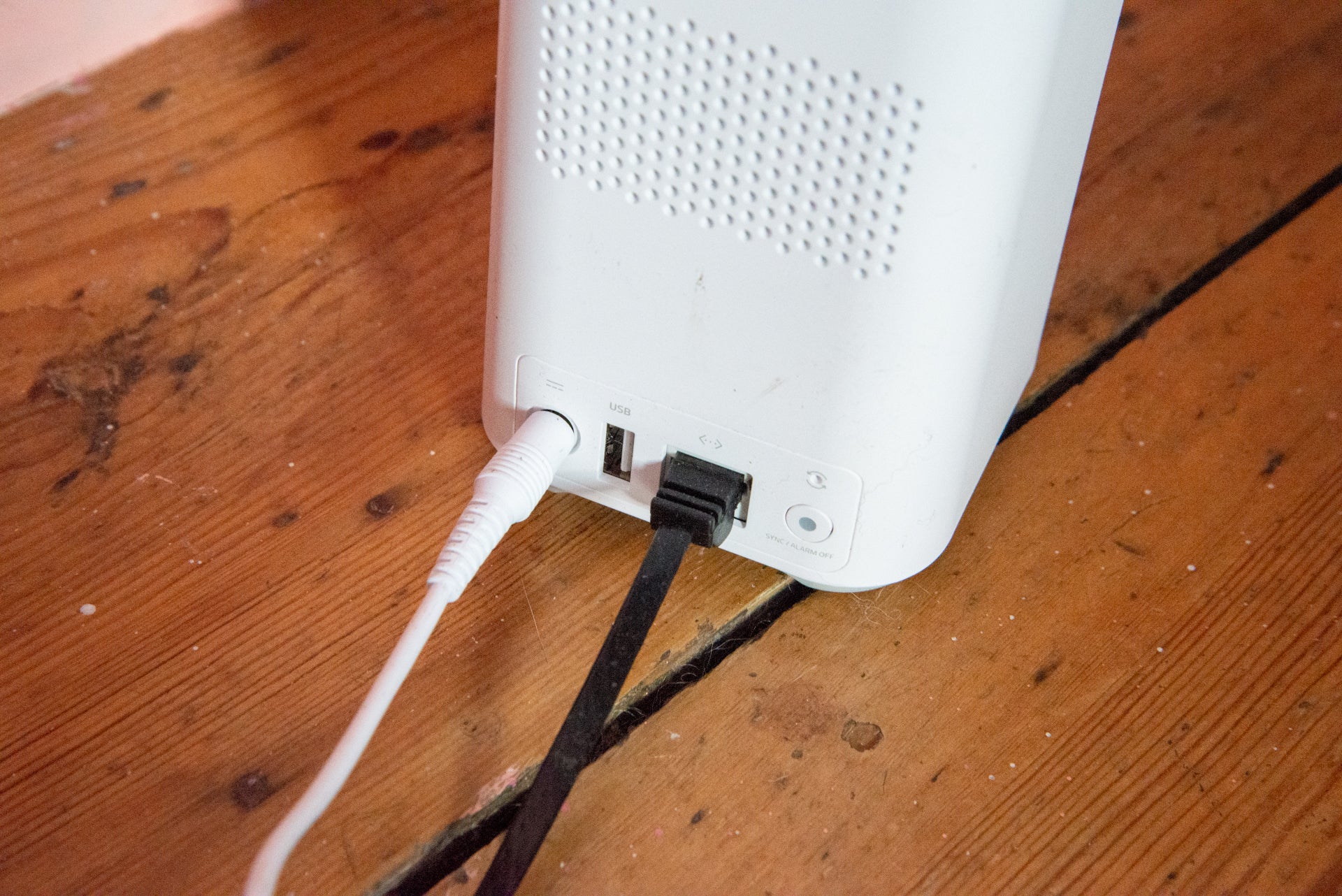 All clips can be accessed in the Events section of the app, which you can filter by device and event type: Person, Pet or Crying. The latter two options don’t apply to this camera, though. There are simple video thumbnails available, so it’s pretty easy to find the clip you’re after.

Battery life is rated at around six months, and based on a few weeks’ use, that figure seems about right. In fact, the doorbell definitely lasted longer than the Ring models I’ve tested.

Thanks to the 160-degree lens and the 2K video resolution (shot at a 4:3 aspect ratio of 2560 x 1920), the Eufy Video Doorbell 2K captures some of the best-quality video I’ve seen. During the day, footage is sharp and incredibly detailed, letting you see exactly what’s going on and revealing plenty of detail in people’s faces.

Only Wide Dynamic Range (WDR) is available, rather than HDR, but the camera managed to cope well with my south-facing front door. If I’m being slightly critical, it’s that the dimensions of the video don’t capture a person at full height, cropping off around waist height; the Arlo Smart Video Doorbell has a tall and thin aspect ratio to capture people in full. 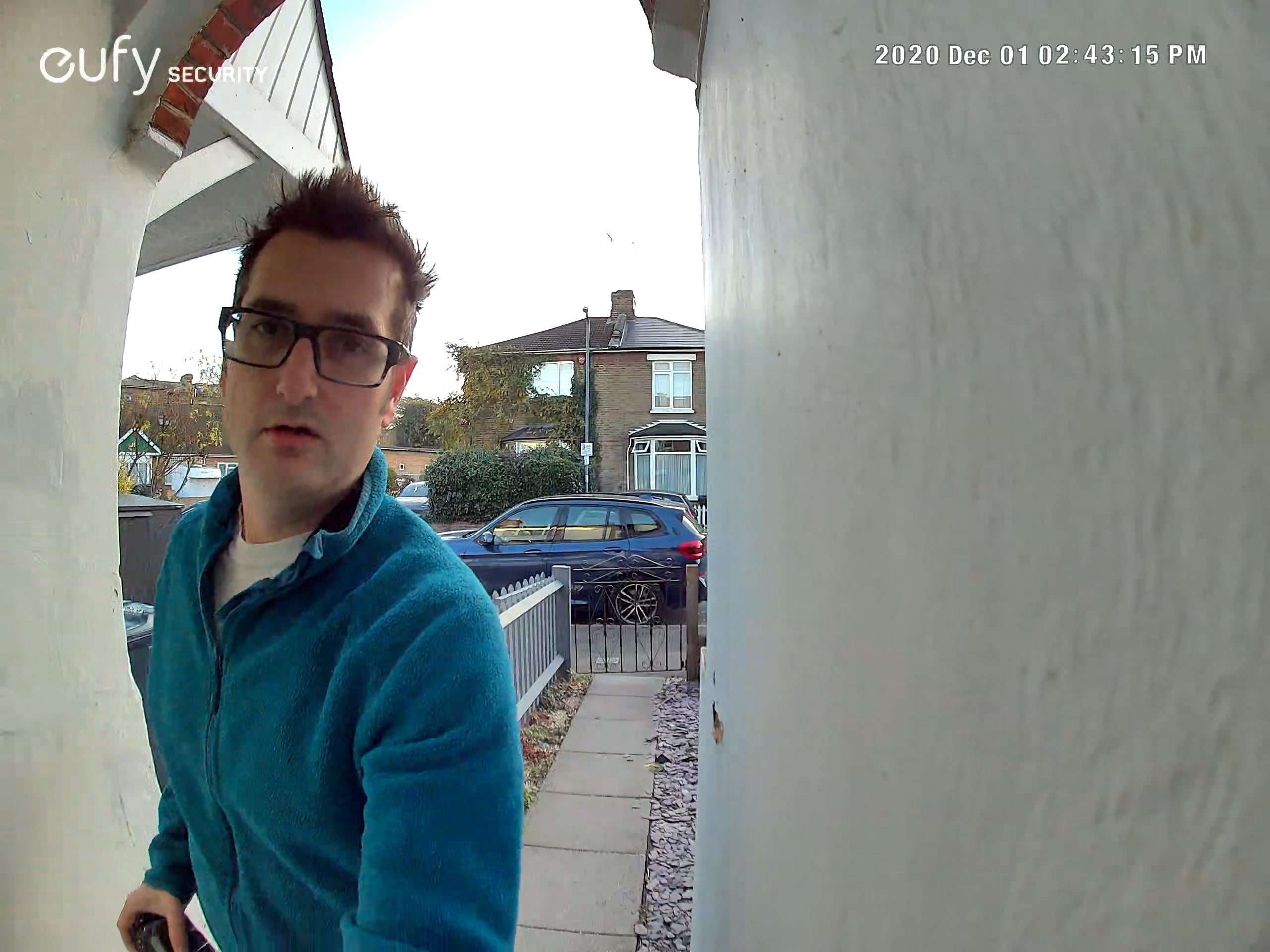 At night, the camera switches on its IR lens, capturing footage in black and white. The camera struggled to light up much beyond my porch, with the IR lights reflecting off the wall. You can see people clearly when they’re close-up and talking to you, but people further away on the path were hard to distnguish. Overall, the Eufy doorbell captures decent footage, with sharp video that at least keeps up with competition.

Should you buy the Eufy Video Doorbell 2K?

Competition is fierce in the video doorbell market. The Ring Video Doorbell 3 Plus costs a similar amount, but you can answer rings from your Echo devices, and the cloud storage is a great upgrade, particularly if you have other Ring cameras or the Ring Alarm.

Then, there’s the Nest Hello, which is wired-only but remains my favourite smart doorbell because of its facial recognition. Plus, you can answer this doorbell from your Google Assistant devices.

Next, there’s the Arlo Video Doorbell, which offers the best image quality of all. This camera requires a cloud subscription to make the most of it, and works well as an addition to any house with existing Arlo cameras.

Despite all the above, room remains for the Eufy Video Doorbell 2K. This high-quality video, without the need for a cloud subscription, is perfect for anyone who doesn’t want ongoing costs.