It might be cheap, but the Eufy RoboVac G30 Hybrid is still very good. While the app is quite basic and doesn't offer no-go zones (you have to use the magnetic tape instead), the robot focuses on what's important: cleaning well on carpets and hard floors. There's also a mop, although this is useful for lighter marks only.

Eufy, an Anker company, has a good track record of producing robot vacuum cleaners that strike a good balance between features, performance and price. The Eufy RoboVac G30 Hybrid fits that description neatly, with its low price, decent performance on hard floors and carpet, and a mop too.

Sure, it misses out on some of the features of more expensive models, such as programmable no-go zones, but if you want to cut costs and focus on the important things, this is a great choice. If you don’t require a mop then the G30 Edge is a similar model, only you get more border tape and a slightly larger bin.

Most robot vacuum cleaners are much of a muchness: discs of glossy plastic. Hat’s off to Eufy, then, for making the G30 Hybrid that little bit more interesting. Its black body sports a rose gold pattern on top, which gives the robot a retro feel.

Measuring 325 x 325 x 72mm, this is a super-low robot cleaner. As such, it will easily be able to dart under most regular bits of furniture, from sofas to sideboards. As seems standard for robot vacuum cleaners, on the underside you’ll find a rotating brush bar for hard floors and carpets, and a single side-sweeper brush for getting dust away from the edges of furniture. 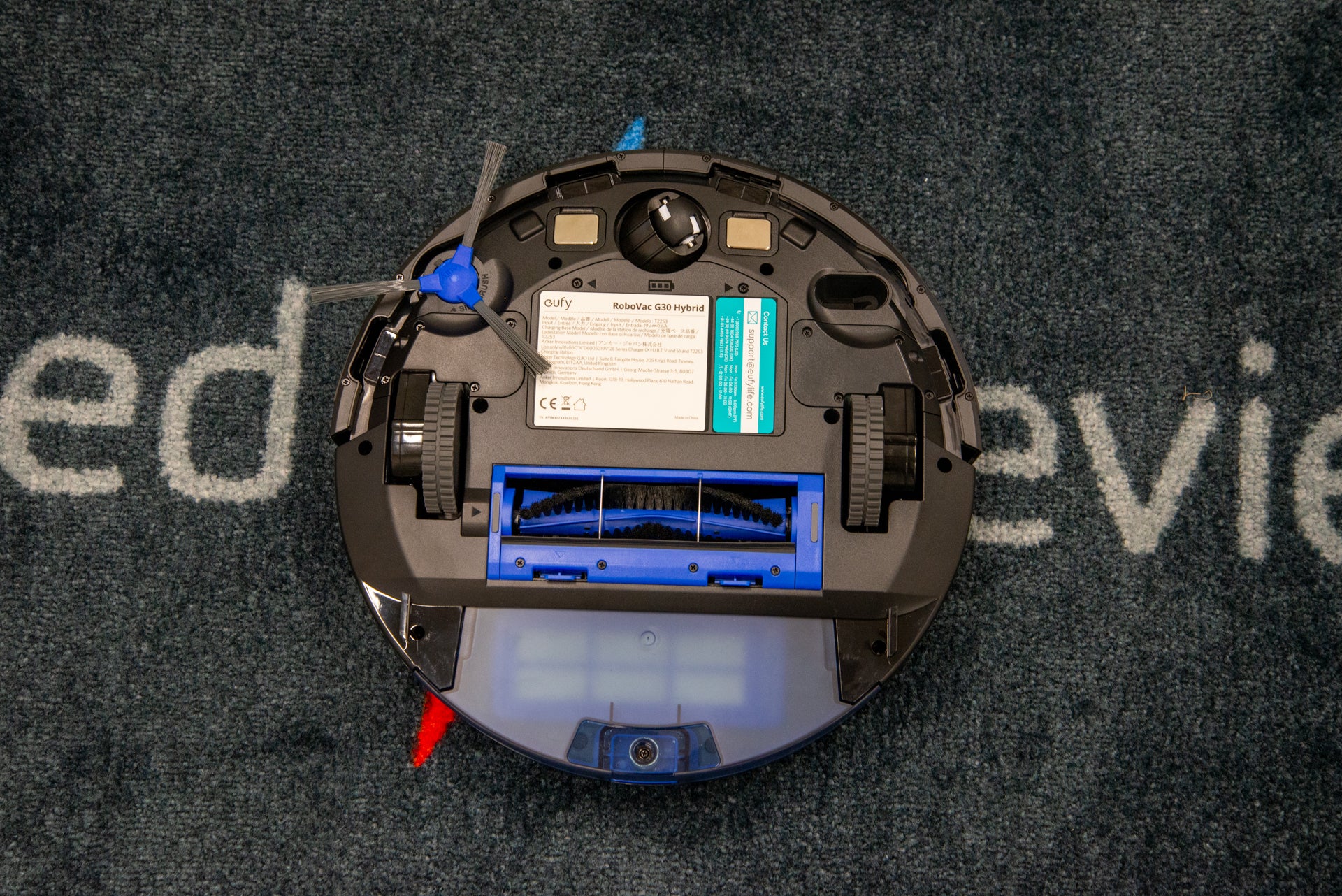 Hair can become trapped around the main brush bar, so Eufy provides a razor in the box for cutting this away – although there’s no neat onboard storage for it. 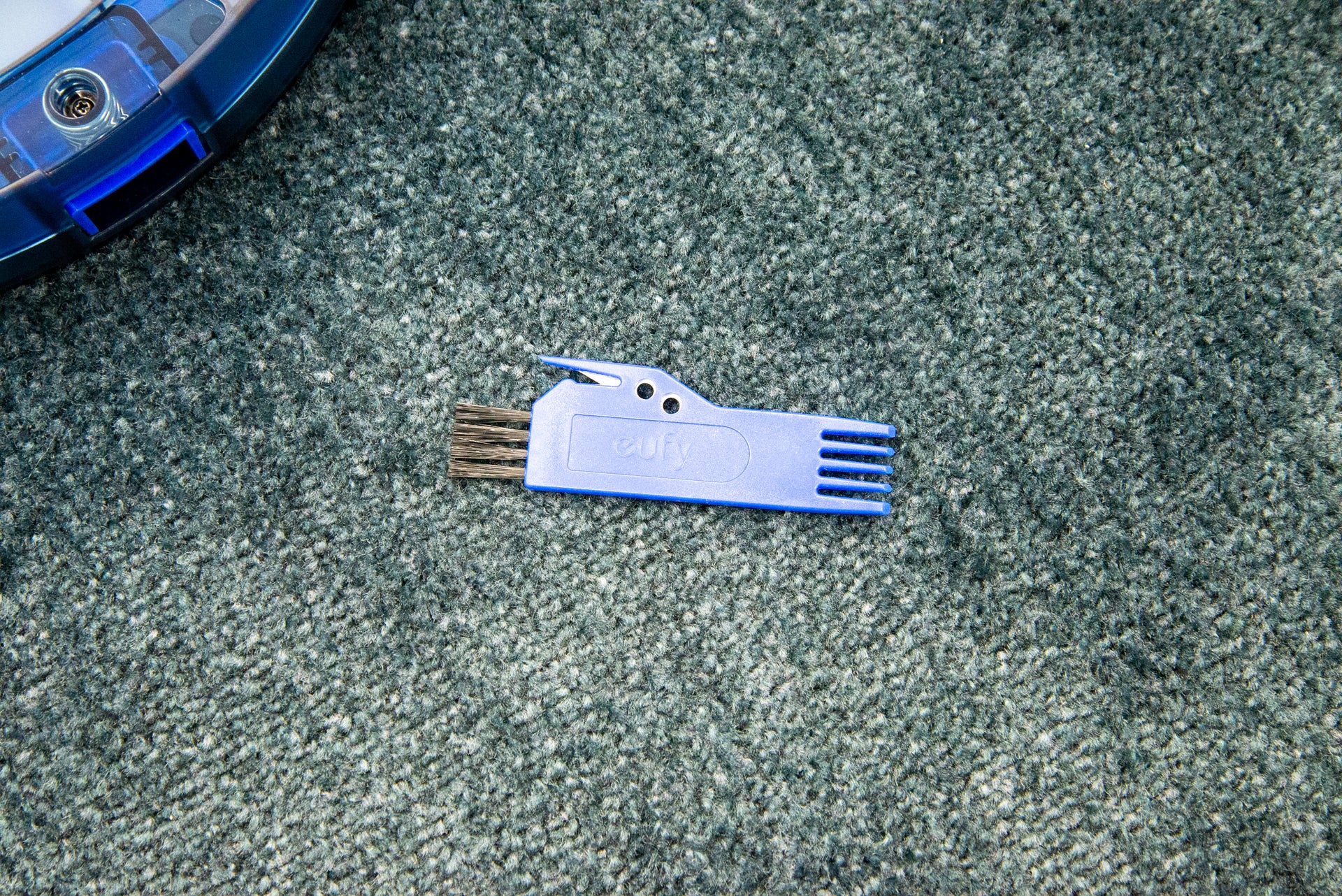 The lack of storage mostly comes down to the lack of a lift-up flap to hide the bin. Instead, the bin unclips and lifts out the back. Be careful, though: there’s no rubber flap to seal in dirt, so it’s easy to accidentally spill all that carefully collected filth back out onto your floor. If anything becomes trapped, the bin’s lid flips open to make it easier to get rid of debris, and there’s a single washable filter inside. 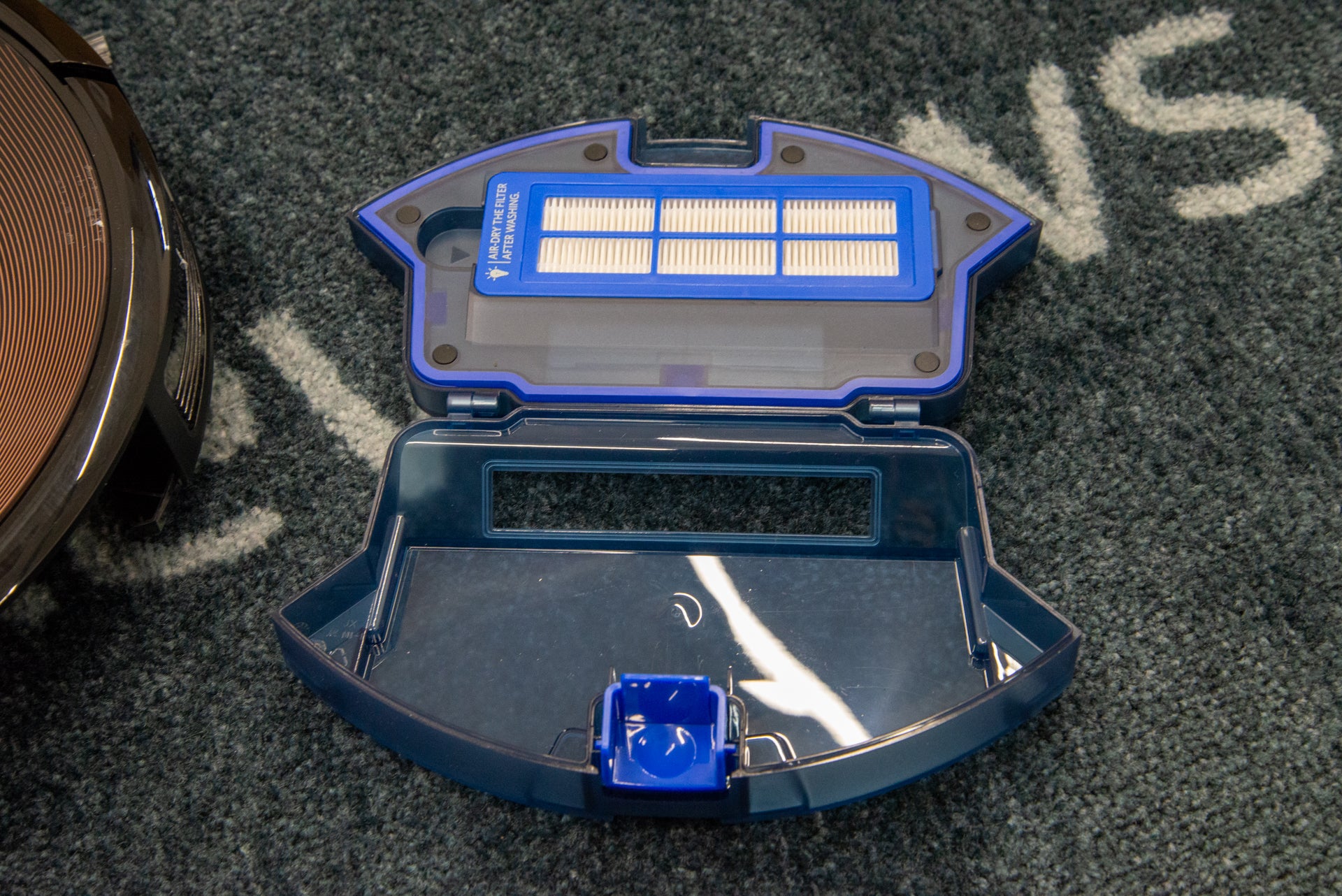 This model comes with a 0.45-litre bin, which should prove enough to cope with most homes. The G30 Edge comes with a larger 0.6-litre bin; the difference is down to the G30 Hybrid’s mop taking up space.

The system comprises a microfibre cloth and a 130ml water tank, which drip-feeds water onto the cloth. You can also use the G30 Hybrid with disposable wipes, although from an environmental perpective, water and microfibre cloths are better. 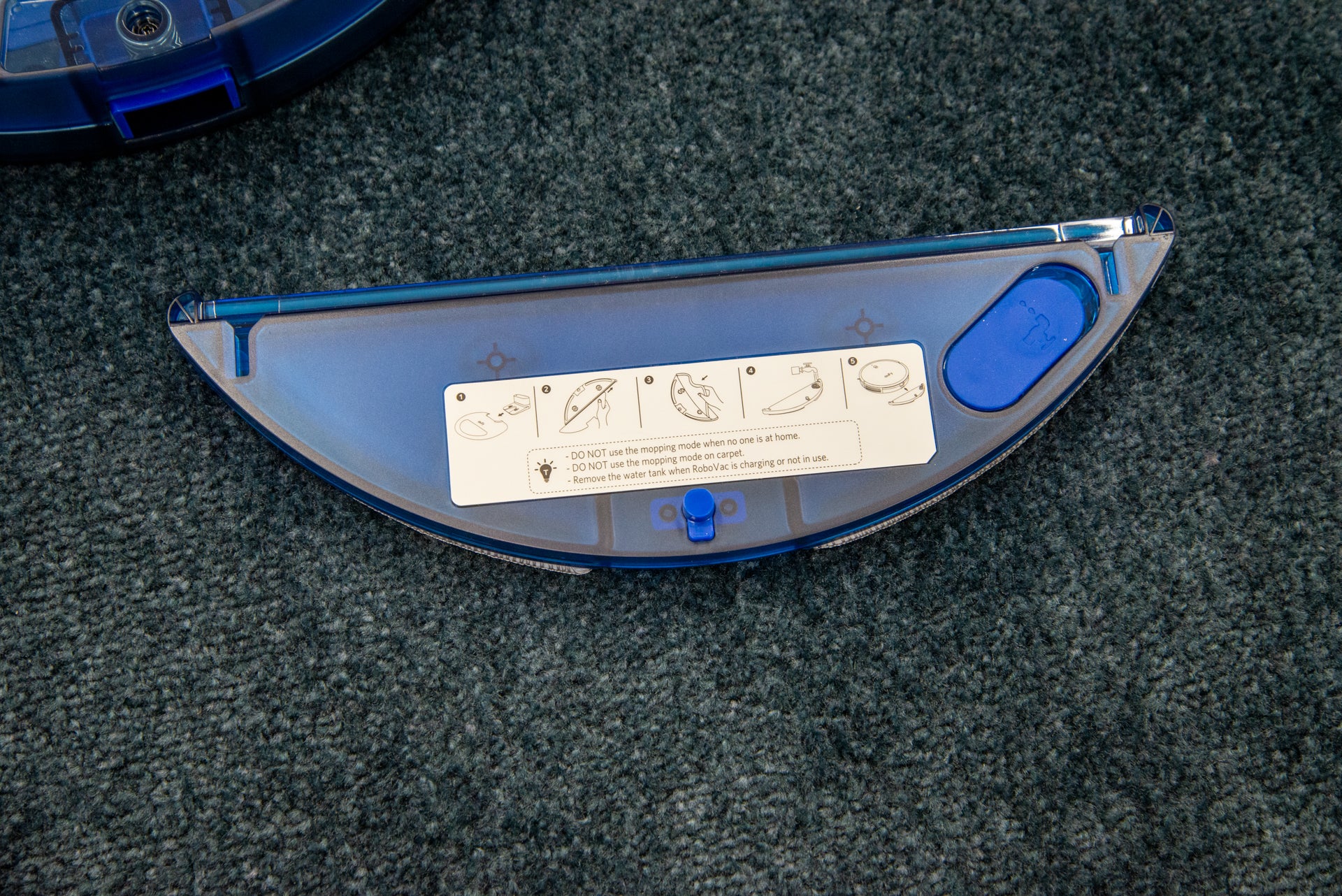 On top, sit the main controls. There’s a button to start a clean, and one to make the device return to its charging dock. There’s also a spot-clean button: you carry the robot to where you want to clean up a localised mess, hit the button and it will clean for two minutes. Eufy RoboVac G30 Hybrid features – Gets the basics right, but misses out on some advanced features

Although you can use the buttons on the top to control the robot vacuum cleaner, you get more control if you use the EufyHome app and hook the robot up to your Wi-Fi. Here, you can pick the cleaning mode you want to use, with the options of Standard, Turbo, Max and BoostIQ. I’m yet to figure out quite what the difference is between Turbo and Max. 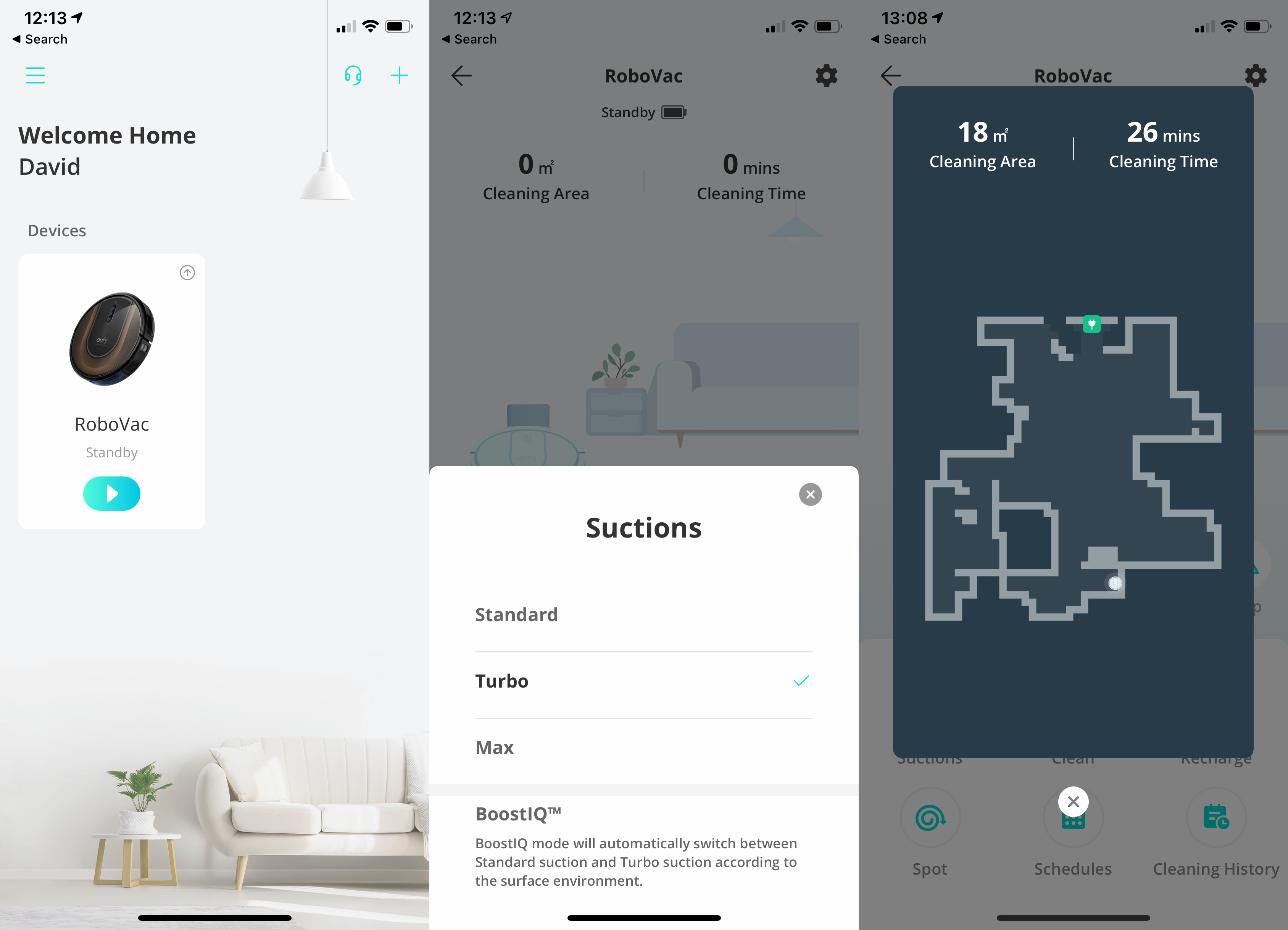 BoostIQ lets the robot detect the type of surface it’s on, and adjust power automatically, giving you a good balance between battery life and performance.

Schedules are available, too, with one per day, letting you set the start time and cleaning mode. It’s alright, but a shame that it isn’t more flexible; most robot vacuum cleaners let you set multiple schedules, running across multiple days. Although the G30 Hybrid can draw a map as it goes, you can’t do anything with the map; it’s just for reference. If you have areas where you don’t want the G30 to go, you have to stick down the 2m of magnetic tape that’s in the box.

This works, but it’s a little old-fashioned. Rival cleaners offer more options for managing your map and controlling where the cleaner can and can’t go.

Unfortunately, neither is there any other way to restrict the robot when the mop bracket is attached. The only option is to use magnetic tape, although this also prevents normal vacuuming, or, if possible, shut doors while the device is in mop mode.

Google Assistant and Amazon Alexa are both supported, with commands to start and stop a clean and to send the G30 Hybrid back to its dock.

Eufy RoboVac G30 Hybrid performance – Does well on all surfaces, if you select the right power mode

Eufy rates the G30 Hybrid with 2000pa of suction, which is pushing towards the top of what you can expect – only more expensive robots such as the Roborock S6 MaxV have more power. However, while power is an indicator of how well a robot can suck, there are a number of variables –such as the quality of the brush and contact with the floor – that come into play. So, to see how well a robot vacuum cleaner actually does, I put all models through a standard set of tests.

I started with my carpet test, placing an ‘X’ of flour in the middle of the test area and letting the G30 Hybrid run through it on Standard power. After the G30 had completed its clean, there was a fair amount of mess left behind. 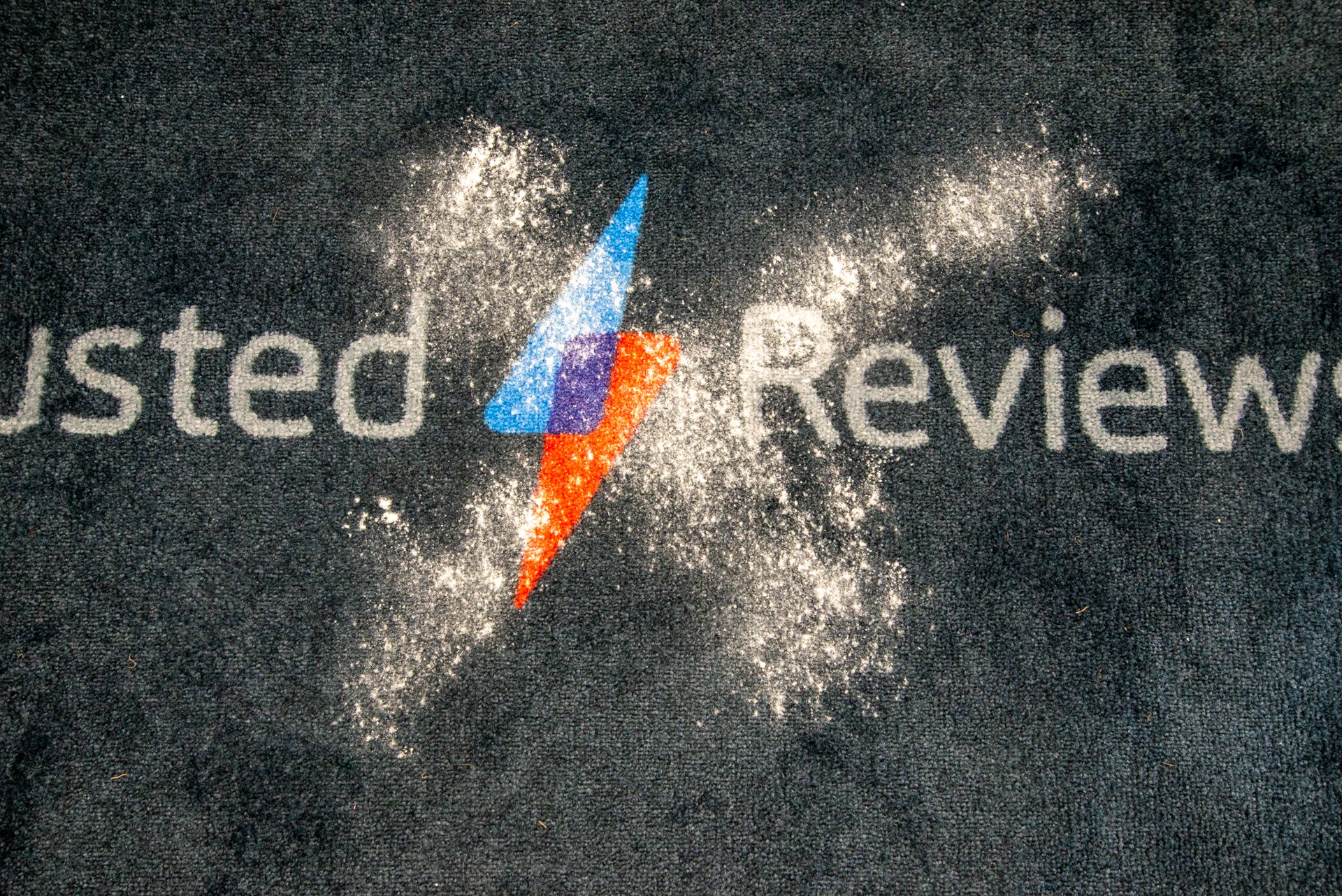 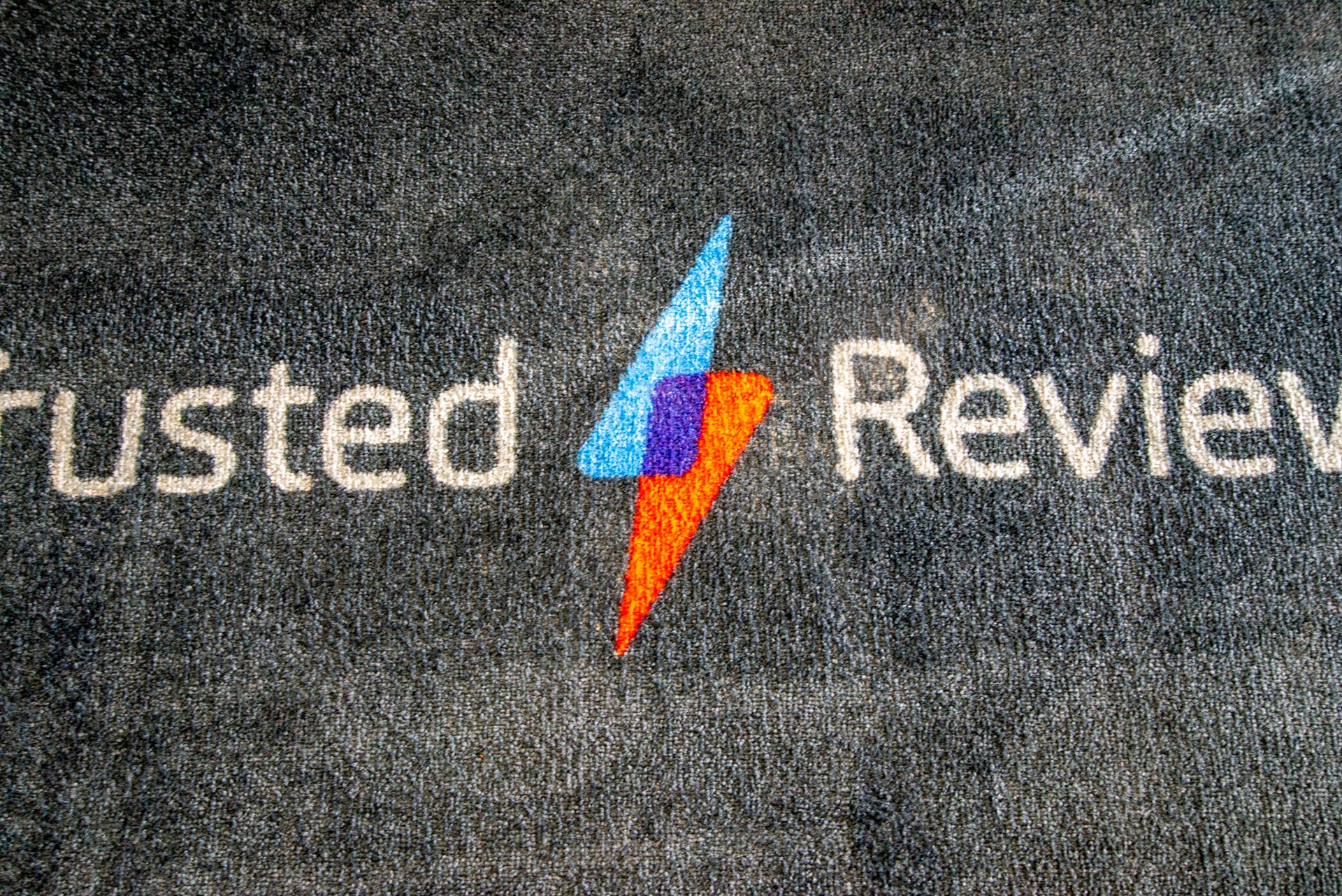 I then re-ran the test using the BoostIQ mode, where it performed better. The G30 managed to pick up most of the mess, although it did run a small trail of dust with its tracks. For the price, however, this is excellent performance; you’d need to spend a fair bit more to achieve better results.

Next, I tackled hard floor performance, again with an ‘X’ of flour sprinkled on the floor. Most of the mess was collected, although there was a small pile in the middle that wasn’t touched and there were some wheel tracks through the flour. Now, this is more mess than you’re likely to get a robot vacuum to deal with – and performance, particularly for the price, is excellent. 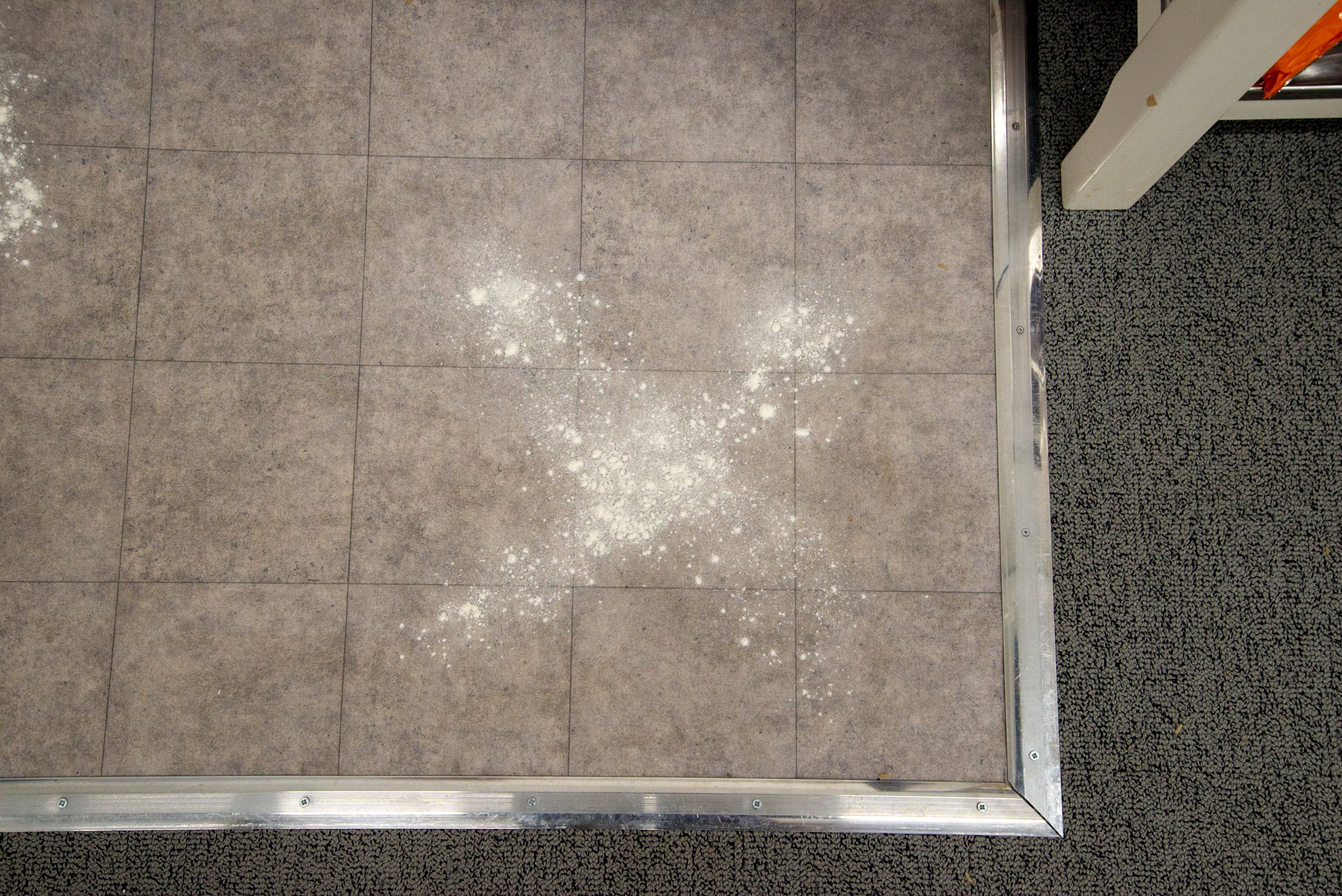 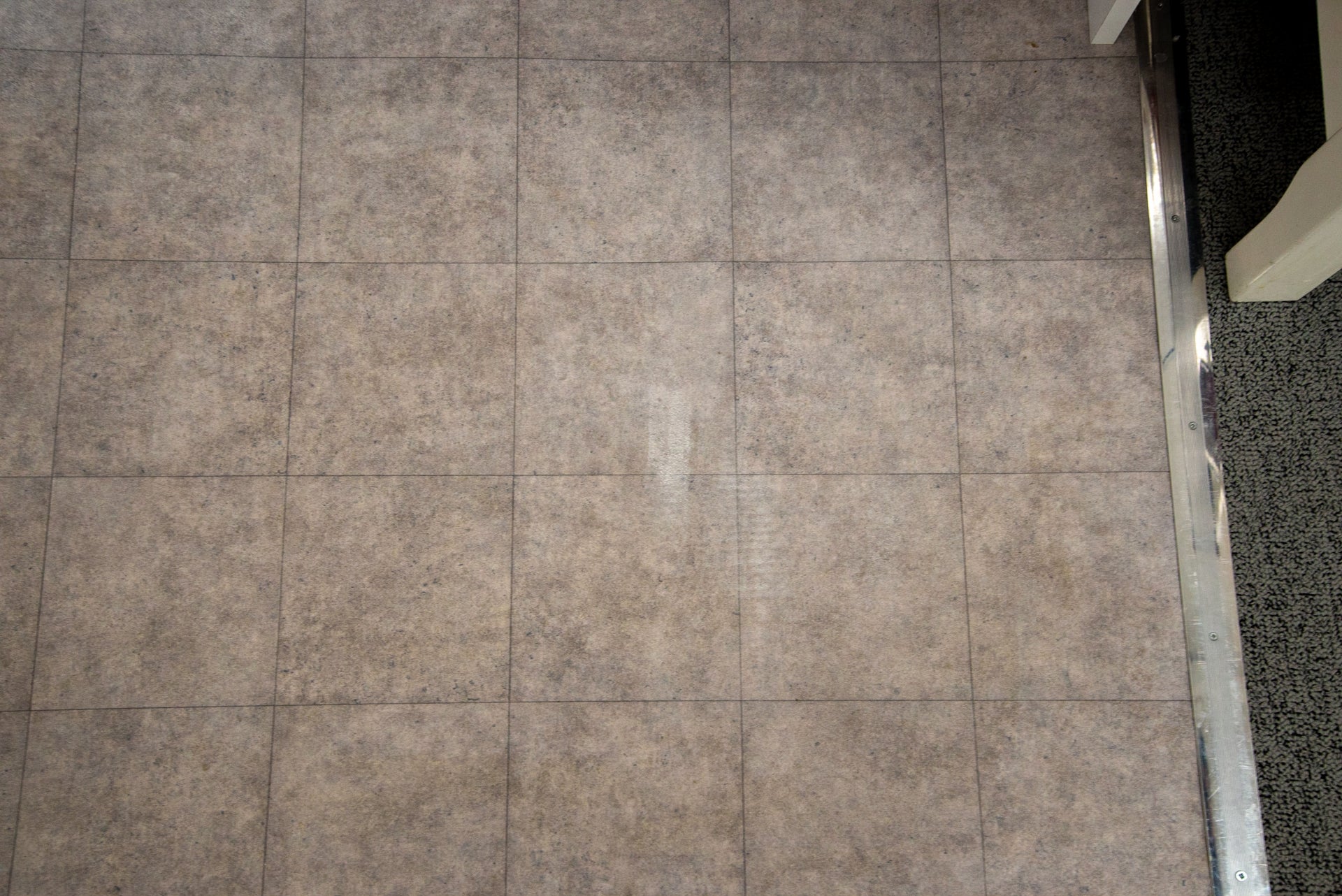 Next, I tackled edge performance, spreading an ‘X’ of flour up against the plinth of the kitchen cupboards. Here, the dirt against the edge was removed easily enough, although there was some mess left behind with some marks left by the wheels. Again, this is more dirt that you’d normally expect, and the performance for the price was good. 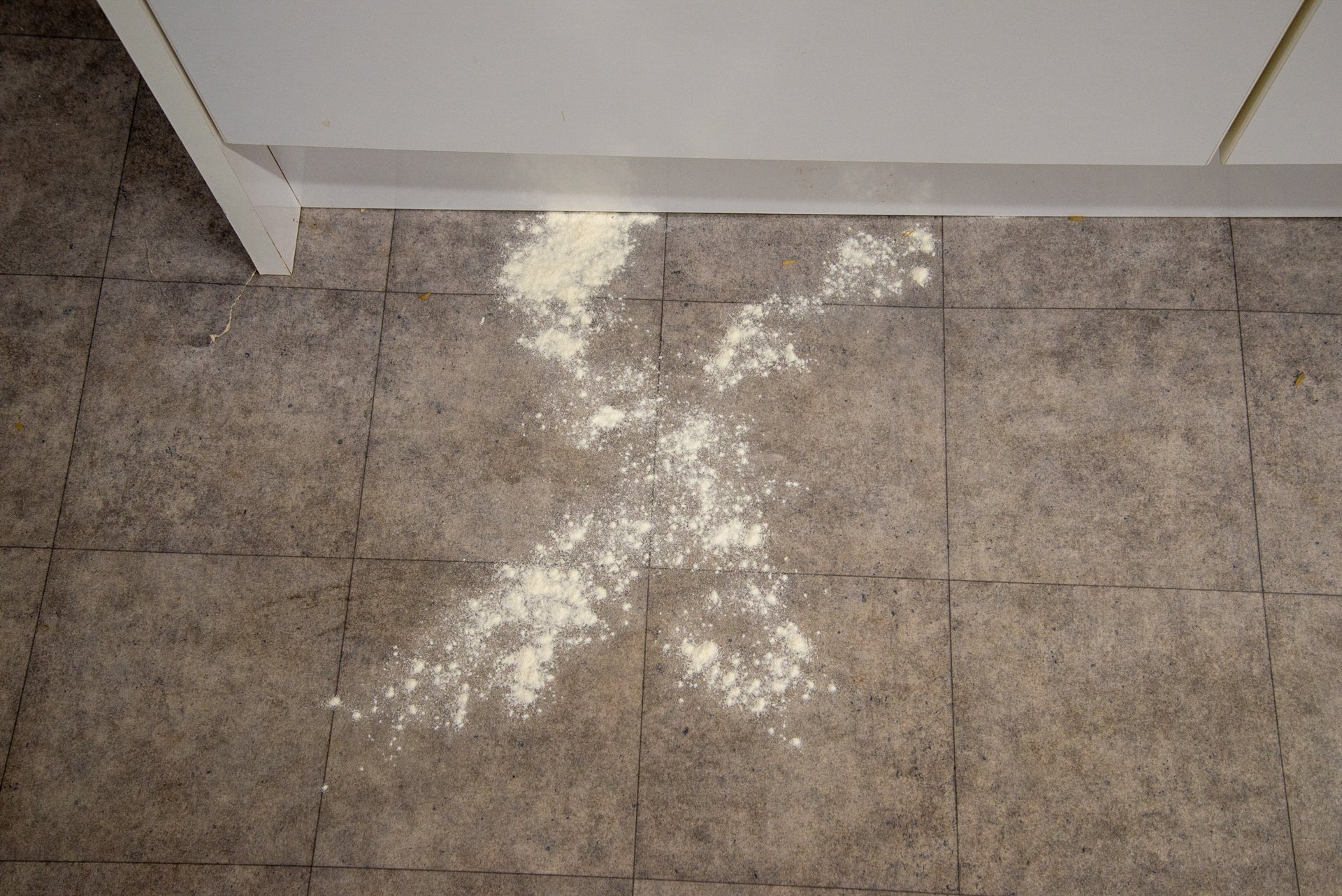 Mopping performance proved far more basic: some dust left behind by the vacuum was collected, but this level of mopping is unlikely to be sufficient for tougher stains. For more powerful mopping, you’ll need a cleaner that can adjust the amount of water used, such as the Roborock S5 Max, or the even more expensive Roborock S7, which offers sonic mopping.

The G30 Hybrid’s battery life is up to 1hr 40mins in the Standard power mode, but around 60 minutes if using BoostIQ. Even so, that was enough to clean my entire downstairs, with enough juice left to roll out a secondary clean in the kitchen. It takes up to six hours to top up to a full battery.

In terms of noise, I measured this robot vacuum cleaner at 58dB, which makes it quiet enough to use while you’re in the same room.

There are more powerful vacuum cleaners available, and there are robot  vacuum cleaner with a greater number of features on offer, as my guide to the best robot vacuum cleaners shows. However, most models are a lot more expensive. If you just want a simple vacuum cleaner to help keep your home tidy and don’t want to spend a lot, the Eufy RoboVac G30 Hybrid strikes a good balance between price and performance.