Punching above its weight, the Eufy RoboVac 30C doesn't look or feel like a budget vacuum cleaner, coming with app, remote control and voice-assistant control. The robot vacuum's navigation is fairly dumb, so the robot gently bounces around your home, picking up dirt as it goes until the battery is up. As such, cleaning can take a while to complete – but the results are good, making the Eufy RoboVac 30C a fine choice for those looking for automatic cleaning on a budget.

Budget robot vacuum cleaners are everywhere, but the Eufy RoboVac 30C is slightly different from some of the other products on the market. Eufy isn’t just another me-too brand; it’s the sister brand of Anker, better known for its smartphone accessories.

As such, the Eufy RoboVac 30C isn’t just a cheap robot vacuum cleaner, similar to the small-brand models I’ve reviewed previously. This vacuum offers solid build quality, low noise, and a decent app. As is the case with other cheaper robot vacuum cleaners, navigation is basic; but if you’re looking for a robust cleaner on a budget then the Eufy RoboVac 30C is a good choice.

Eufy RoboVac 30C – What you need to know

Although the Eufy RoboVac 30C is comparatively cheap, you wouldn’t know it by looking at it. Its slim, circular body (330 x 330 x 73mm) feels rugged and tough, and there’s a neat pattern on its top to make the vacuum look a little more interesting. 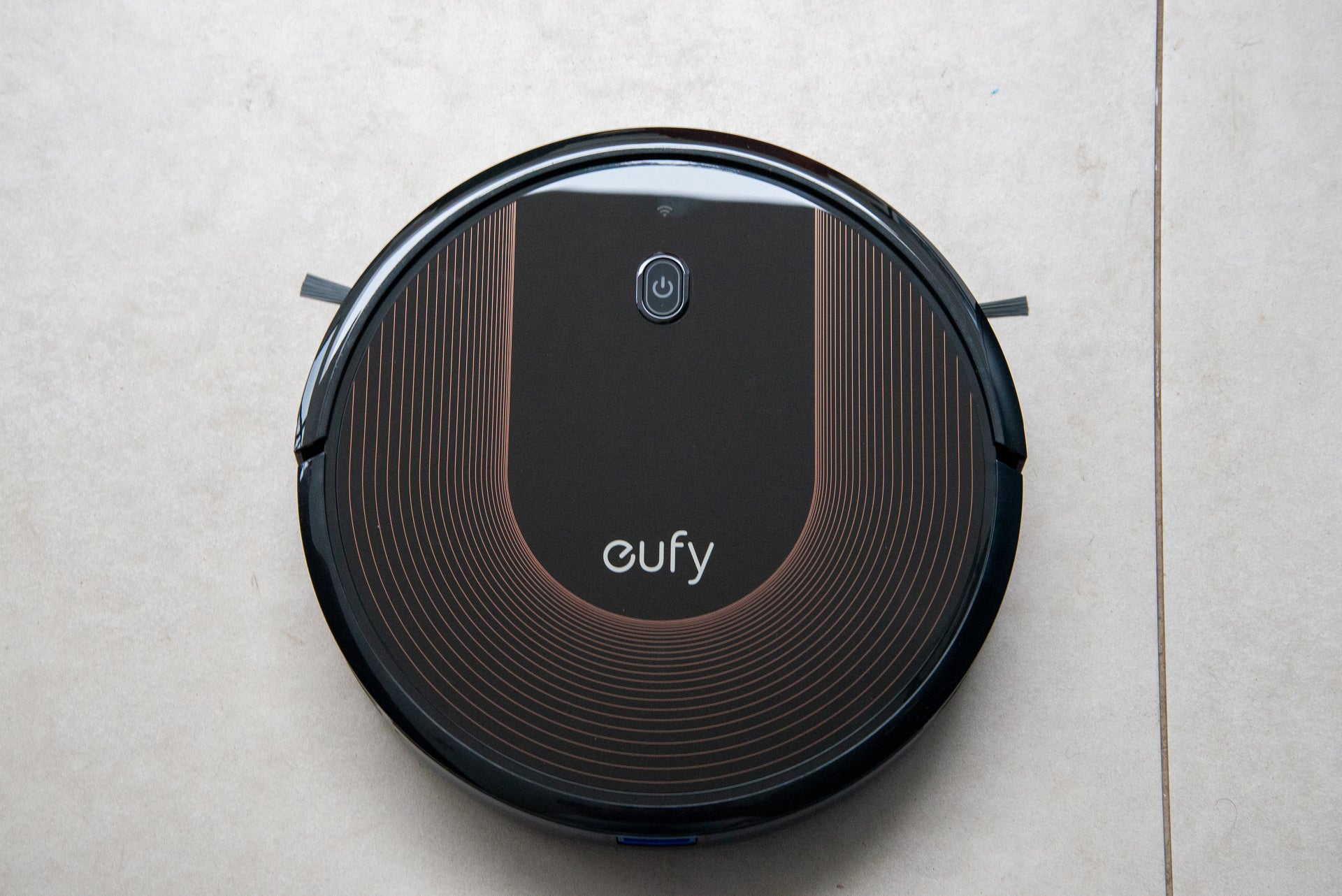 It may be cheap, but the robot vacuum cleaner looks neat

Before you can use the Eufy RoboVac 30C, you first have to fit the two side brushes, which clip in on the underside of the vacuum. Here, you’ll also find the pre-fitted rolling brush, designed to agitate dirt for better pick-up. This can be unclipped easily for cleaning, with Eufy providing a razer to cut through any hair that may become wrapped around it. 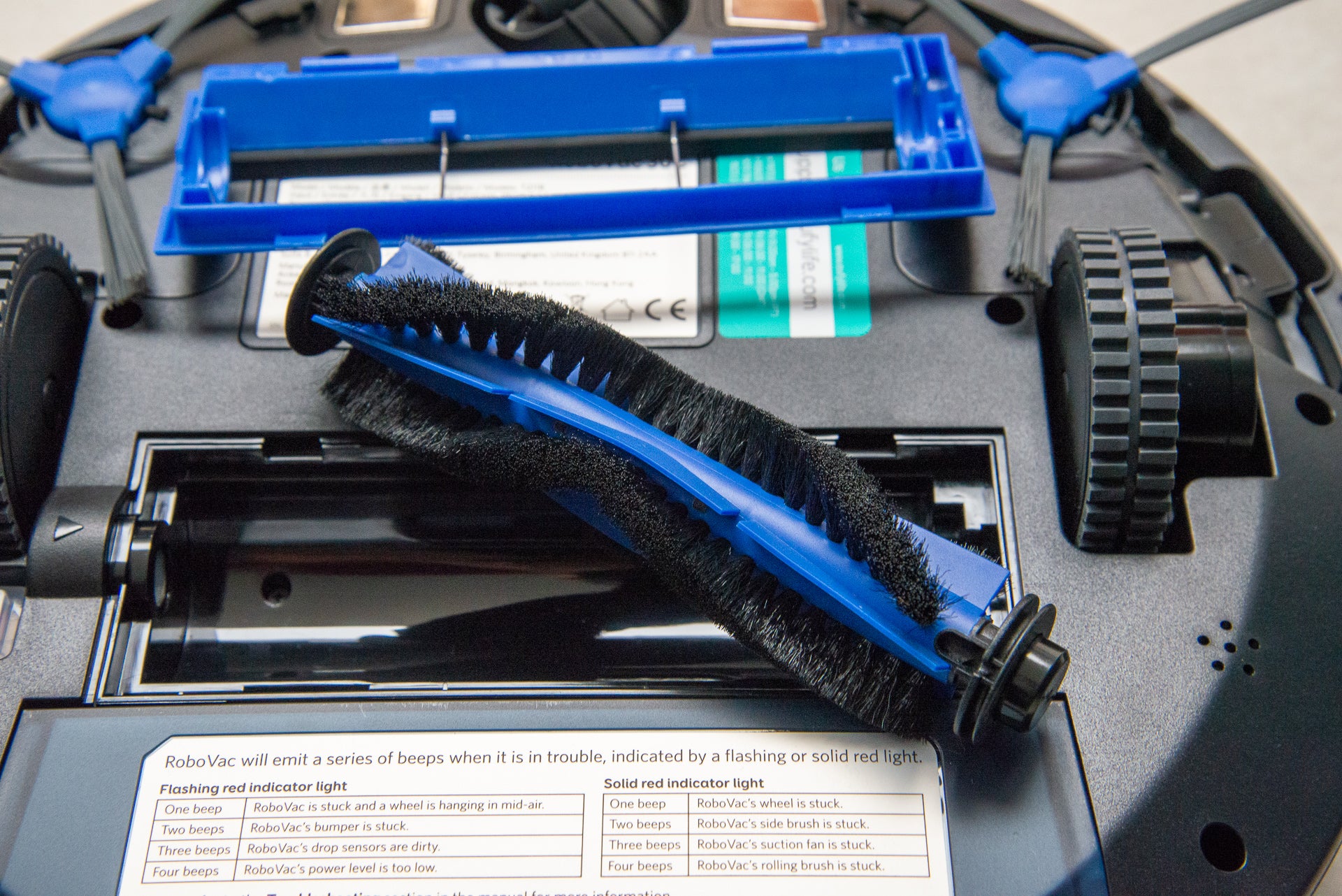 The brush pops out for cleaning, so you can easily cut away any hair using the provided tool

The dustbin is quite large for a robot vacuum cleaner at 0.6l. It pulls out the back of the cleaner without any trouble, and opens up to make disposing of dust simple. Inside the bin is a filter that pops out, so you can replace it when need be. 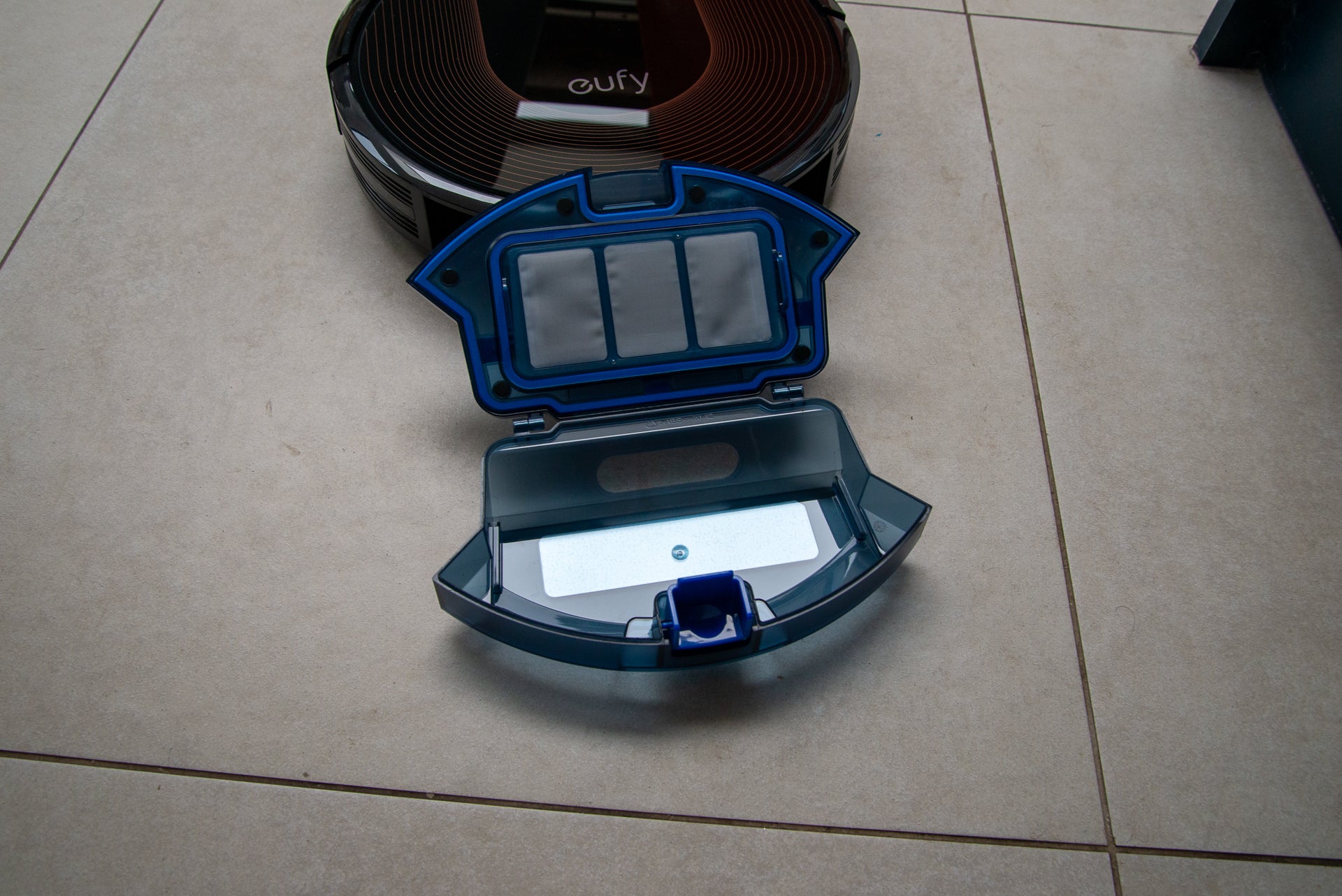 Eufy RoboVac 30C control – You can use the remote, app or voice control to set the robot cleaning

Cheap robot vacuum cleaners typically only offer manual control, either on the robot’s body or via a remote control. For convenience, Eufy provides a remote control, but it also gives you full app control via your smartphone and the EufyHome app, which is available for iOS and Android. 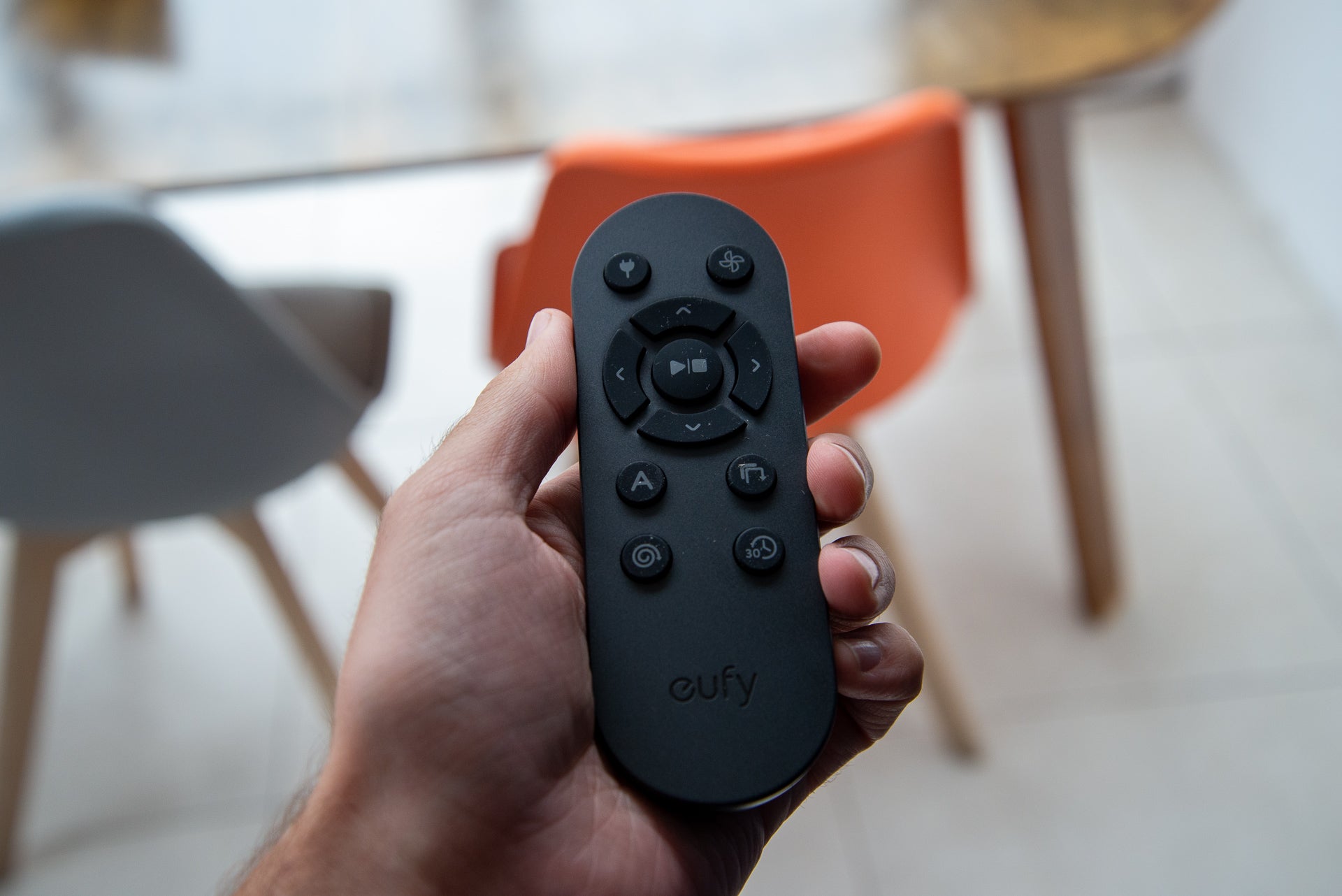 Connecting the robot to the app could be easier. Using iOS 13, the app refused to detect the robot and thus wouldn’t let me add it to the app. Switching to an Android phone, I managed to get the Eufy RoboVac C30 recognised and connected to my home Wi-Fi network. Once the robot registered in the app, I could control it from both iOS and Android.

Control is basic through the app, though. You can start and stop a clean, change the cleaning mode and set a schedule. The schedule allows you to set one clean per day, and each clean uses the last mode set on the vacuum, with no option to override. 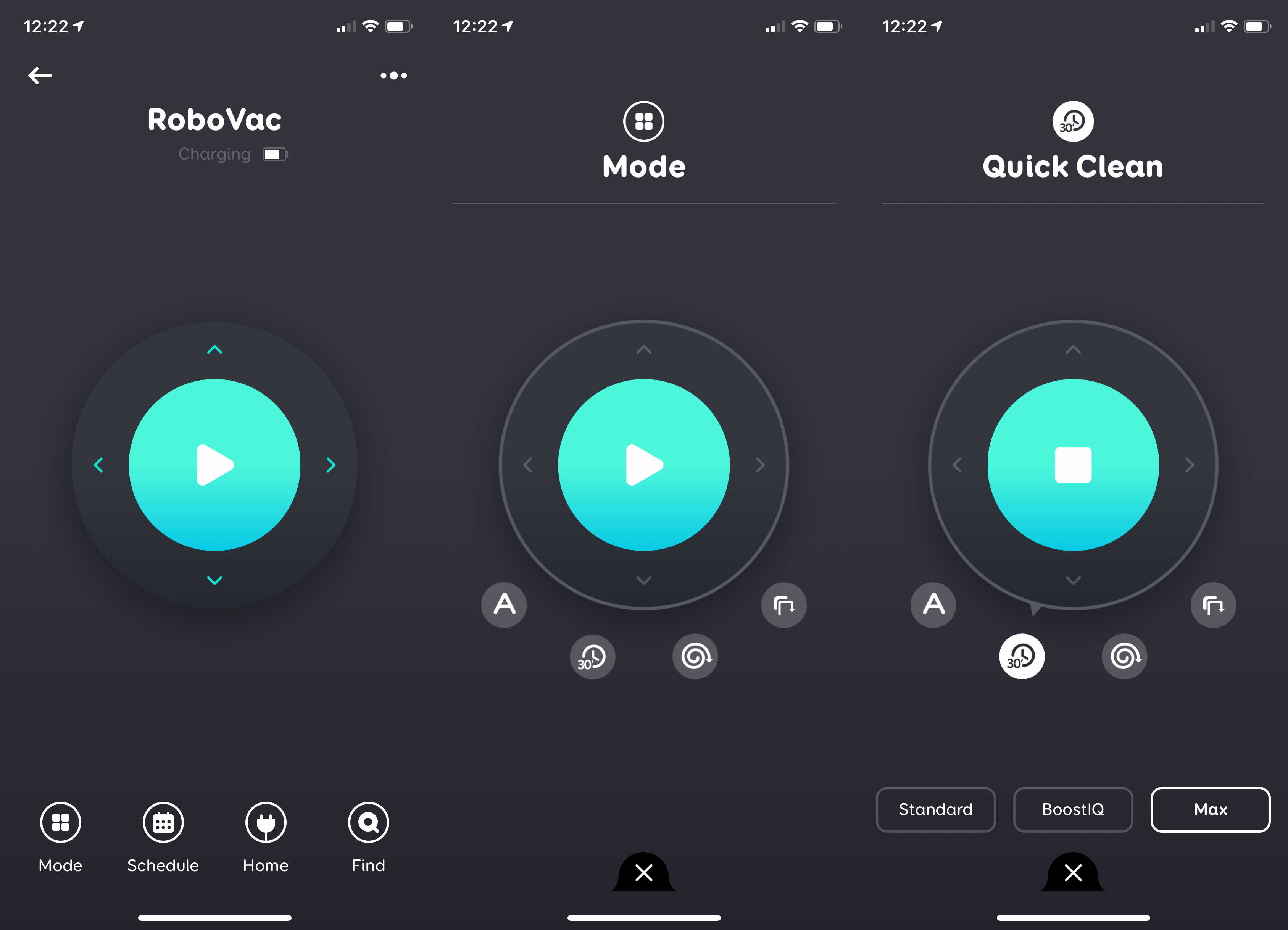 The app is basic but functional

There are no maps to control and you can’t set virtual boundaries. Eufy provides magnetic tape in the box so you can physically block the 30C from going anywhere you don’t want it to. The app also offers a Find option, which plays a sound from the robot should you lose it under some furniture.

Once the app is connected, you can use the Amazon Alexa or Google Assistant skills to voice control your robot, starting a clean with a simple command.

Bar the scheduling, the physical remote control provides the same controls, with dedicated buttons to select the mode. Modes include Automatic, where the vacuum will bounce around until it has run out of battery; a Quick Clean that lasts 30 seconds and is designed for a single room; Spot Clean for cleaning a small area; and Edge Clean, where the 30C will move around the outskirts of your room.

You can also adjust the vacuum’s power mode, choosing from Standard, Max and BoostIQ; it uses Standard mode until the robot detects it needs a bit more power. For a quality clean, I recommend leaving the cleaner on Max.

There are no cameras or laser navigation on the RoboVac 30C, with the robot using what Eufy calls Bounce navigation. In other words, the robot moves along until it detects an object, then it spins and moves off again.

In Auto mode, this continues until the robot has exhausted its battery life (around 1hr 40mins), then the 30C returns to the charging dock. This method of cleaning is fairly standard at this price, and it can be effective. However, the 30C has no idea if it has cleaned everything, and I found that it would cover some areas more than others.

Robots that map out their area do a better job of covering a room, as they know where they’ve been and where they’ve yet to clean. 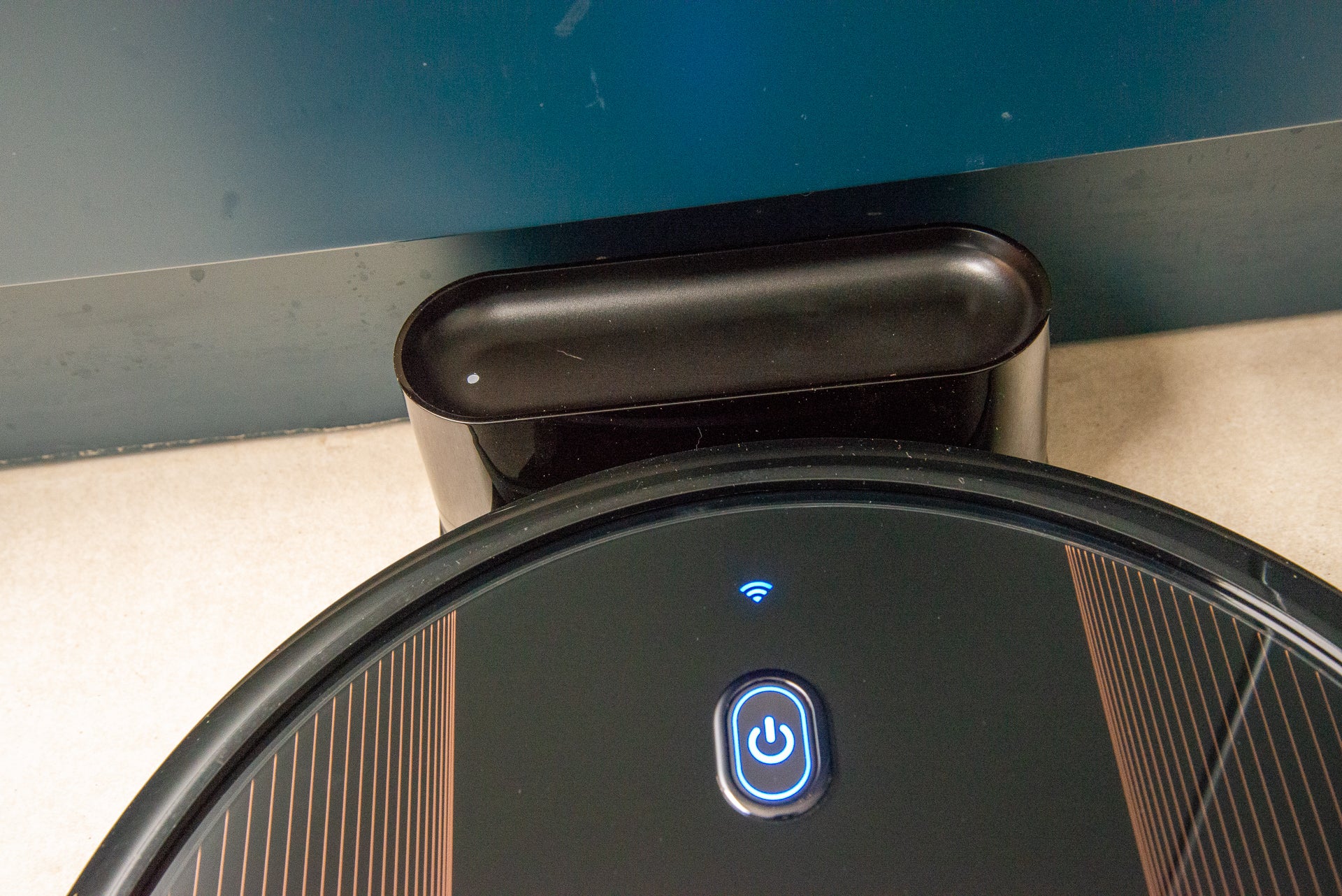 Once the battery has been exhausted, the robot returns to its charging dock

Fortunately, navigation is gentle, with the robot sensing edges and moving away without ramming into skirting boards or objects at full speed. In my kitchen I found that the RoboVac 30C got around everything and between chair legs without causing any damage.

As with practically all robot vacuum cleaners, the Eufy RoboVac 30C has cliff-edge sensors, so it won’t just throw itself down some stairs. These worked on the small step into my kitchen.

Eufy Robovac 30C cleaning – Solid results in areas covered, but you might need to switch modes

Although it’s quiet at 62.7dB, the Eufy RoboVac 30C is comparatively quite powerful. Running over our test dirt on carpet and hard floors, the vacuum cleaner did a decent job when it hit an area head-on. There are some minor issues, though.

Smarter vacuum cleaners will more carefully tackle an area before moving on, but the Eufy RoboVac 30C can charge through an area, picking up some dust and then spreading the remainder around; it will then bounce off in a random direction. Eventually, the vacuum will cover your entire floor, but it can take a while to do so.

Testing on hard floors first, I spread an “X” of flour and carpet freshening powder on a tiled floor. Leaving the vacuum in Auto mode until it had run out of battery, the Eufy RoboVac 30C managed to pick up most of the mess, although some residue was stuck in the grout lines. 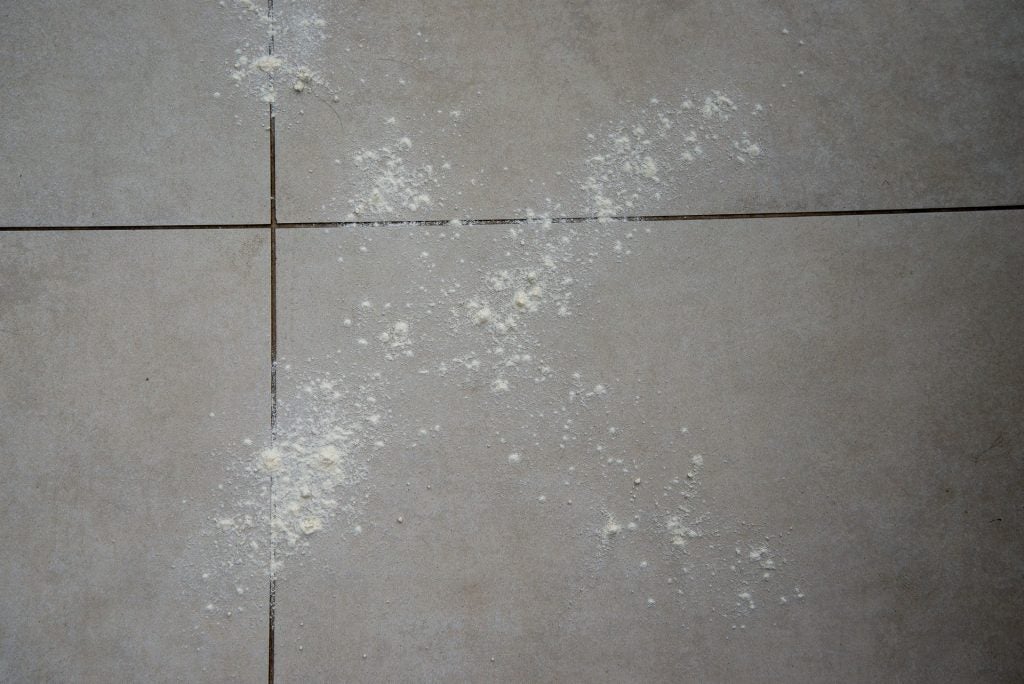 For this test the vacuum passed over the area several times. A smarter vacuum cleaner would have done the job in less time, making sure it covered the area properly on the first outing.

Likewise, the same test on carpet showed that when the Eufy RoboVac 30C made solid contact, it picked up most of the dust. However, it left a little behind due to the way it bounced around the room. 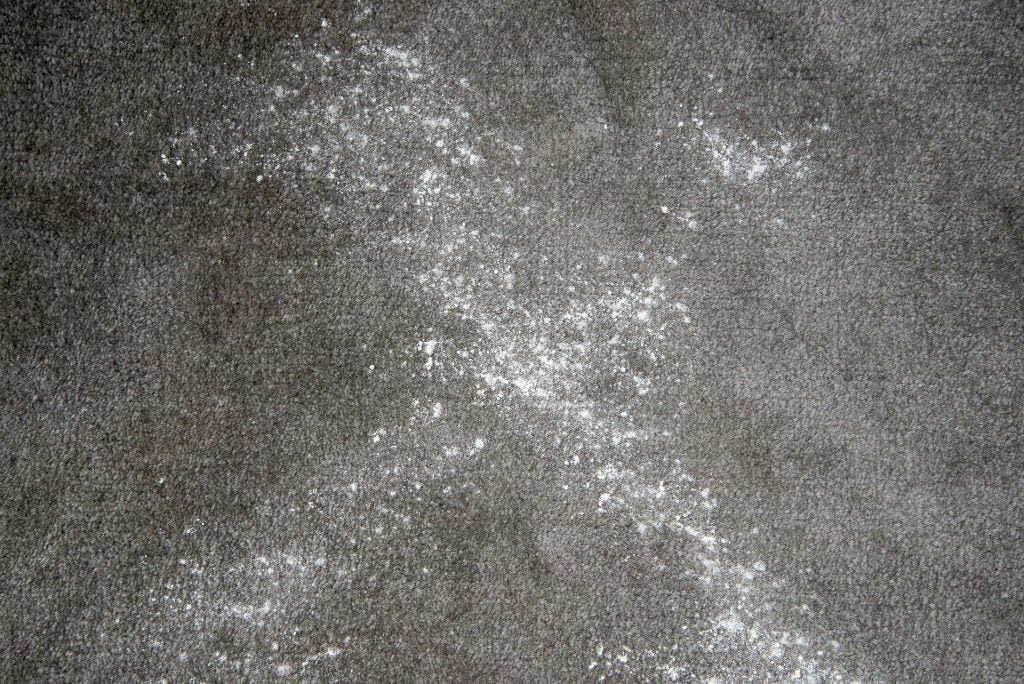 For edge cleaning, I sprinkled an “X” of dirt against a cupboard. In Auto mode, the cleaner didn’t quite make the right contact, bouncing up against the edge, rather than running along it. For better cleaning here, I switched the robot to its Edge Clean mode. Results were pretty good, with most of the dust gone, although some remained behind in the grout lines in the tiles. 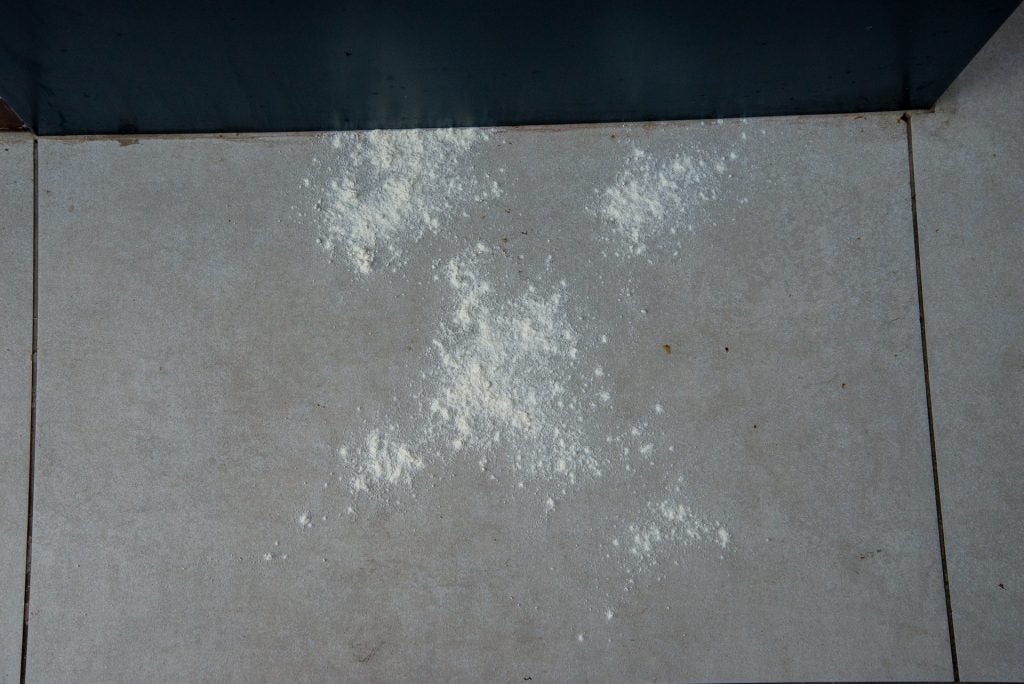 Considering the price, cleaning performance is very good, but make sure you use the right mode for your cleaning needs. Depending on the room size, a Quick Clean may be a better choice, followed by an Edge Clean.

Should I buy the Eufy RoboVac 30C?

At this sort of price, robot vacuum cleaners tend to be very basic in navigation, bouncing around until they’ve covered a house. What’s important is that pick-up is sufficiently strong enough to remove dirt. The Eufy RoboVac 30C certainly does a good enough job with powerful suction. However, as with other cheap cleaners, it’s worth switching between cleaning modes to get the best coverage in your home.

It’s nice to see Amazon Alexa, Google Assistant and app control, too, making this robot easier to control and schedule.

All that said, the competition at this level is tough. The base price of the Ecovacs Deebot N79S is less, and you get similar cleaning ability and features. However, at the time of review, the Eufy RoboVac 30C was available for £70 off through the official website, making it cheaper than the N79S.

As such, I’d go with whichever cleaner you can get cheaper. If you want more intelligence and the ability to mop, it’s worth spending a little more on the Xiaomi Roborock S5, which is currently quite a bargain.