Etymotic’s hf2 headset left us wanting very little. Not only did it have a great, accurate, sound, it also sported a convenient iPhone-compatible in-line remote and microphone. You might wonder, then, what the hf3 headset can offer by way of improvement upon its predecessor to justify the £130 asking price.

The only outwardly discernable change is the presence of three, not two, buttons on the in-line remote. As usual the middle button works as both a play/pause, a skip forwards and back, and a voice-command activation control with various press-and-hold combinations. The placement of this remote in one half of the ‘Y’ section of the hf3’s cabling puts in close to the mouth, and no-one we called had any complaints about the clarity on our end, so there’s no problem there.


The cable is somewhat prone to transmitting noise as it waves about, which can be a tad annoying. Fortunately a clip is provided which eliminates that problem, and while the slightly rubberised cable does rub a little, it also seems remarkably good at not turning into a tangled mess when pocketed. Less functional, but still appreciated is the choice of three colours – red, blue and black – for the hf3 headset, all of which look pretty suave.

The accessory selection is par for the course with Etymotic, contained within a soft zip-case. Typically, the hf3 headset is bundled with all-but-pointless triple-flange tips; does anyone find these comfortable? Less naff is the choice of two different types of foam tip – a softer cylindrical pair, or a firmer nub-like pair. The latter proved both the most comfortable and gave the best noise-isolation for us, but your mileage may vary.


If you want to go all out Etymotic offers the choice of custom-fitted tips for the hf3 headset. While expensive, this gives a definite step-up in terms of noise isolation, which in turn lets you hear your music that much better. Whether the £70 these custom tips cost would be better spent on a headphone amplifier, or put towards another set of earphones entirely we’ll leave for you to decide.

The sound of the hf3 headset might take a little getting used to if you’re migrating across from just about any other brand of earphones. As Riyad said of the hf2s way back in 2008, fans of bass emphasis need not apply, but that’s not a criticism. Where the hf3s success lies is in delivering a clear, detailed and uncoloured reproduction. 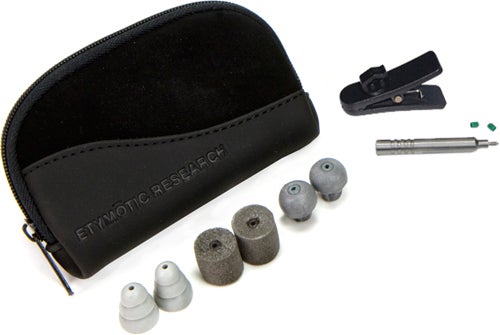 Unlike the lower-end Etymotic MC5 earphones, we didn’t find that the hf3s lacked presence. It’s only if you can’t get a good fit that the hf3 headset completely lacks bass; once you get a good seal their low-end comes through and balances out the overall sound nicely. It’s also worth noting that the hf3s handle complex music without getting muddied or crowded, and don’t show any discernable distortion even at too-high volumes.


It’s the high-end that we find the hf3s accuracy really pays off. Female vocals are presented with a pleasantly natural tone, and cymbals ring out clearly and brightly, but without any sibilance to ruin the crisp reproduction. Quite what it is about the hf3s that makes their strive towards accuracy sound good, while the MC5s sound clinical we couldn’t say, but whatever it is, it works.

That said, we couldn’t find any difference between the hf2 and hf3 headsets in terms of sound quality, which makes us wonder why the newer set is £30 more expensive. Other than volume controls on the in-line remote we’re not sure there’s anything to justify the price increase, which makes us wonder why you wouldn’t just pick up the hf2 headset as it can be found for under £70 – practically half the price of the hf3.


It’s under no dispute that the hf3 headset does a great job of reproducing a detailed, uncoloured and, above all, accurate sound. And the provision of volume controls, in addition to the play/pause button and microphone the predeceasing hf2 headset offered is definitely a useful improvement. Inexplicable, however, is the disparity in price between the hf2 and hf3 headsets given how minor the change is – the former offers much better value for money.