When it comes to noise isolating earphones, Etymotic Research is up there with the best. If you’re looking to buy a set of earphones that will significantly improve the audio experience from your player, then Etymotic should definitely be on your short list, along with Shure, Ultimate Ears and going by recent form, Klipsch too. But this particular set of Etymotic earphones, has a neat trick up its sleeve. You see the hf2s aren’t just earphones, they’re actually a complete hands free solution for anyone that uses their iPhone as their music player.


The problem with having a separate MP3 player and phone, is that when you’re listening to your music, you miss all your phone calls. This was a problem that I encountered regularly when I was wandering around London attending Press events – obviously I didn’t want to walk the streets without music, but the result was a plethora of missed calls when I arrived. That all changed when I picked up an iPhone last summer, and started to use it as both my MP3 player and phone. From that point on I could listen to my music, while safe in the knowledge that if my phone rang, I’d know about it. 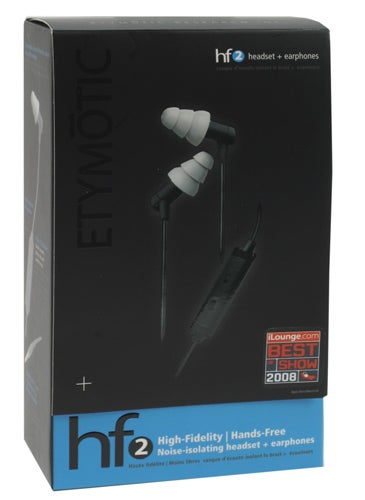 The transition to using my iPhone as my music player was made complete when Shure released its Mobile Phone Adapter, which allowed me to use my E500 earphones with my iPhone, while also giving me full hands free functionality. Now, great as this solution is for anyone who has Shure earphones already, it’s not the most elegant solution, and if you are looking for a decent set of earphones and hands free functionality, an all in one solution could be a better bet.


There are, of course, several earphone/hands free solutions available for the iPhone, including the woefully poor set that comes in the box. However, if you wanted to seriously improve your audio experience, your options were limited, to say the least. And this is where Etymotic comes in with the hf2s – Etymotic’s reputation speaks for itself in the sound quality department, while the design team has also clearly worked overtime to create a product that’s as unobtrusive as possible, without compromising the audio.


The hf2s remind me of the Etymotic ER.4 microPro earphones that I reviewed a couple of years ago. The single armature drivers employed by the hf2s allow for a very slim and lightweight design, much like the ER.4s and, in fact, the recently reviewed Klipsch Images. However, the hf2s aren’t quite as comfortable as the Images, and you can definitely feel that you have them in your ears – but then the Images are just ridiculously light and comfortable.

The mic hangs from the right earphone and I found that it was positioned perfectly in relation to my mouth. Compared to my usual solution of Shure E500s and MPA, the mic is far closer to my mouth, and I don’t find myself routing all the cabling to get the microphone in the right place, as I have to with the Shures. The most amazing aspect of the microphone though, is how light it is – you’d honestly be hard pushed to even notice it was there while you’re wearing these earphones, which is no mean feat.


There’s a single button on the mic unit which will answer and end calls when in phone mode. While you’re listening to music, pressing this button will pause/resume playback, while a quick double press will skip to the next track – just like the Shure MPA in fact. This is very basic functionality, but it’s also very useful, since you’ll have to take your iPhone out of your pocket every time you want to skip tracks without it. 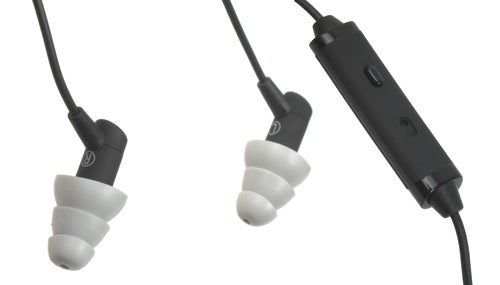 The sound quality from the microphone is impressive too. I made several phone calls from noisy locations like Waterloo Station and Heathrow Airport, and the person at the other end had no problem hearing me. If you are planning on chatting while you’re walking though, you should make use of the cable clip, since cable slap will be transmitted.


Talking of cabling, Etymotic has done a good job when it comes to keeping things tangle free. The 4ft cable has a rubberised coating, which seems to stop if getting tangled, even after being stuffed into the carry case. Obviously the 3.5mm plug is slim enough to slip into a first generation iPhone, although it’s good to see that Apple has seen sense and dumped that design for the 3G iPhone.


Etymotic insists on supplying its earphones with triple flange tips. I’m not sure who finds triple flange tips comfortable, but I certainly don’t. That’s not to say that you can’t get a good seal with the triple flange tips, just that I wouldn’t want to wear them for extended periods. Thankfully you also get a pair of foam tips in the box, which resemble the old style Shure tips, in that they’re cylindrical and flat at both ends. The foam tips create a tight seal that improved sound quality over the silicone triple flange tips. A definite plus point is that Shure’s foam tips fit the hf2s perfectly, so I would suggest investing in a few pairs of these, since the smooth coating and tapered ends make for a more comfortable experience, coupled with an even better seal.

Unsurprisingly, the hf2s sound very much like the ER.4 microPros, which is no bad thing, especially since they’re considerably cheaper than the ER.4s too. If you’re a fan of heavy, over emphasised bass response, then you’re not going to like the hf2s. Like all Etymotic earphones I’ve listened to, the hf2s are all about clarity and accurate audio reproduction, but many will equate that to a lack of bass and dismiss them, and that would be a serious mistake.


If you want to hear the hf2s in their element, you need to throw some more acoustic material at them. Wild Wood by Paul Weller instantly showed just how good these earphones are. The acoustic guitar and background percussion are rendered beautifully, as is Weller’s distinctive voice. Listening to a track like this makes it clear that a bias towards low frequency is nether necessary or desirable. 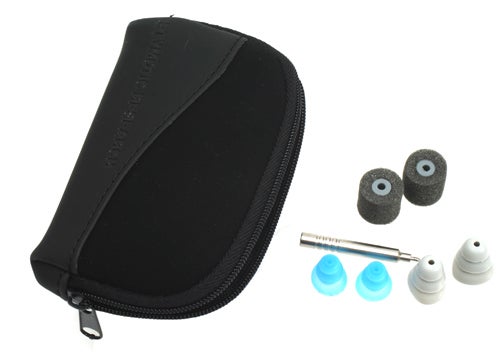 Changing tack completely I fired up Cochise by Audioslave, a track that recently got a lot of exposure due to the Iron Man movie. Again the hf2s did a great job, reproducing the heavy guitar riffs and Chris Cornell’s vocals with an impressive amount of power, but not at the expense of the percussion, which is relatively far back in the mix. However, the slight lack of bass response is evident here, especially when I listened to the same track on my triple driver Shure E500s directly afterwards – but let’s not forget that there is a major price differential between the E500s and hf2s.


Next I cued up Future Sex/Love Sounds by Justin Timberlake – when this guy went solo I really wanted to hate his material after he subjected us to ‘N Sync, but unfortunately he ended up producing some pretty damn good stuff. What Goes Around Comes Around is a fairly complex arrangement, but the Etymotics didn’t miss a beat, despite the plethora of strings, heavy beats and strong vocals. Again, there’s less bass than you’d get from a set of dual or triple driver earphones, but overall you’re getting a well balanced sound.

One thing that’s very apparent with the hf2s is that a good seal is vital to achieving the best sound quality. Because these earphones favour high end clarity, if you don’t have a good seal, you’ll end up with pretty much no bass whatsoever, and a very harsh sound overall. Once again, I’d recommend using foam tips, and even though I doubt Etymotic will like me saying it, some Shure foams to really get the best out of these earphones.


Considering that the ER.4 microPros cost £190 when I reviewed them back in 2006, I fully expected the hf2s to come in at a similar price. Surprisingly though, the MSRP for the hf2s is £100, which probably means that you’ll be able to pick them up a little cheaper than that online, once they hit the channel. You can pick up Shure’s SE310s for around this price, and I’d say that they have the edge over the hf2s when it comes to sound quality. However the Shure’s don’t let you talk on your iPhone while it’s in your pocket – unless you buy the MPA, and that’s adding another £40 to the price.


The earphone upgrade market is becoming ever more crowded with quality products, but if you’ve just bought yourself a shiny new iPhone and don’t already have a decent set, the Etymotic Reseach hf2s make a very good case for themselves. 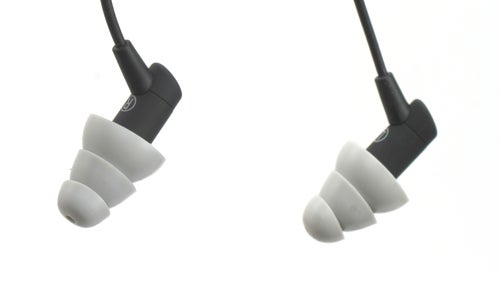 
If you’re an iPhone user you won’t need much convincing that the hf2s represent the perfect replacement for the awful set that comes in the box. The sound quality is a little light on bass, but impressive nonetheless, while the microphone makes taking calls a breeze, even in noisy environments. The ability to pause your music and skip tracks without taking your iPhone out of your pocket is also a bonus.


If you’re major concern is sound quality, then you’re probably better off looking at a set of Shure SE420s and a Shure Mobile Phone Adapter to go with it, but that’s going to cost you far more. For most users though, Etymotic has produced the perfect companion for your iPhone.