What are the Etymotic ER4PT?

The Etymotic ER4PT are top-end
earphones costing around £250. They’ve been around for a while, but
having not checked out an Etymotic top model since 2006, I thought it
was time for a look at what the company is offering today.

If
you’re after a lean, mostly uncoloured sound – where each part of the
mix sits in its own clear space – then these earphones offer up some of
the best sound available from a single driver. Want bags of power and
beefy bass? Then the Etymotic ER4PTs probably aren’t for you.

They’re
audio nerd earphones. However, they’re in desperate need of an update,
since they lack a cable with both a built-in remote and shirt clip that
would make them otherwise ideal for those wanting earphones for their
journey to and from work. 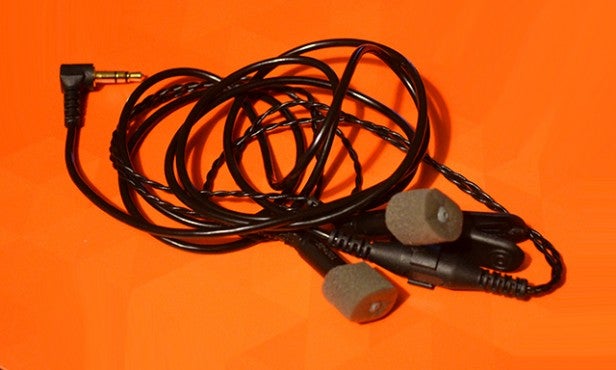 Whether you opt for entry-level earphones such as the MK5s or the top-end ER4PTs, Etymotic’s earpieces share the same look – they’re a bit like tubes with wires attached to the ends.

Etymotic
has also largely ignored the trend for using flashy materials. The
Etymotic ER4PT have a light, plastic housing, rather than a metal one
giving a more expensive feel.

However, the plastic used is a
league above the cheap-feeling material present in the Etymotic MK5s.
I’ve no major complaints about the ER4PT’s lack of bling. 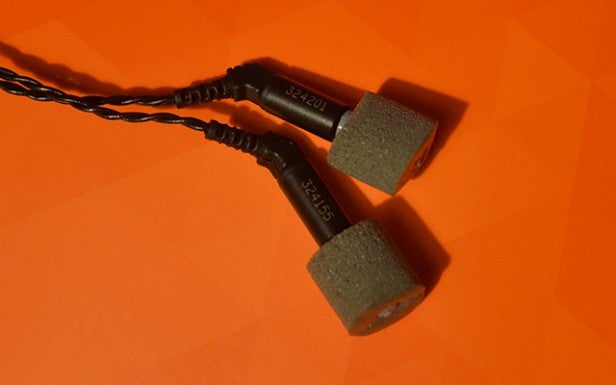 Other
parts of the design might put some of you off, though. First, the
earpieces stick out from your ears by quite some margin – although it
gives you plenty to tug on when you want to take them out.

However,
this position does a funny thing to the Etymotic ER4PT’s “pivot point”.
The earphones have a rather chunky plastic ingot that sits where the
left and right cables meet. So although they’re very light, the weight
here makes the Etymotic ER4PT feel as though they’re ever-so-slowly
trying to work their way out of your ears – or at least pulling on them,
when you’re walking around with them in.

The simple solution is to use the included shirt clip, specifically designed to clamp onto this bulky plastic section.

I’d
usually leave such an accessory in the box, but with the ER4PTs I’d
recommend using it. It won’t be so easy to use if you tend to wear
t-shirts rather than shirts, or other clothing without an obvious
clip-friendly seam. Plus, the oversized clip will also do nothing for
your fashion cred. 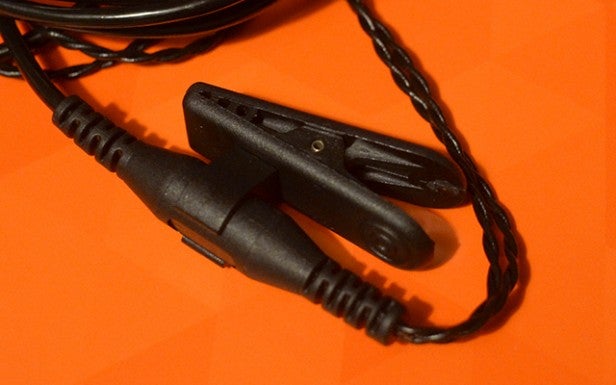 The
clip largely deals with the issue of comfort, and puts an end to much
of the noise that is otherwise a result of the chunky cable bouncing
against your clothing. Known as microphonic noise, it is often an issue
with earphones that offer good isolation.

The ER4PT’s isolation
is excellent, especailly when used with the foam tips included in the
box, which areof the triple-flanged silicone variety. I didn’t find
their invasive fit particularly comfortable, however. This is largely
down to the shape of your ear’s insides, so some may be fine with them.

Despite
all the extra bulk, the Etymotic ER4PT don’t inlcude any form of
hands-free functionality or remote control. That huge bit of plastic
really is just there to act as a junction point for the cable. 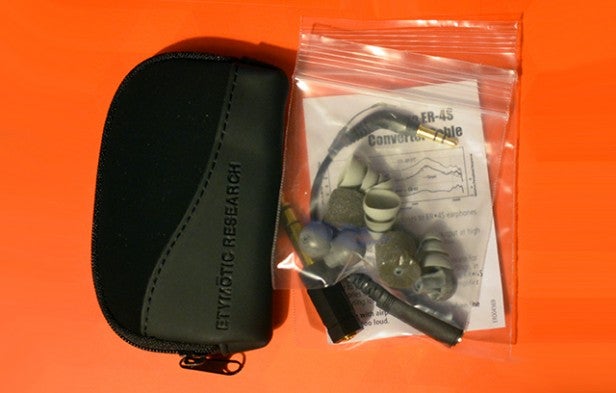 It
does feel like a quality cable, though. It’s braided up top,
chunkier-than-average down below and longer than a standard cable.

One
other area where the Etymotic ER4PT lag behind other top-end earphones
is that its cable is non-removable, or at least not user-replaceable.
It’s designed for easy repair should it become damaged, however. But
you’ll have to buy a £20 replacement from eBay and do the job yourself.

The
Etymotic ER4PT aren’t at the cutting-edge of earphone-related frilly
bits. However, there’s much less to complain about on the inside.

They
use single, balanced armature drivers, and claim to be among the “most
accurate” earphones available. Sure enough, they have a tone that
emphasises detail, clarity and the separation between instruments. 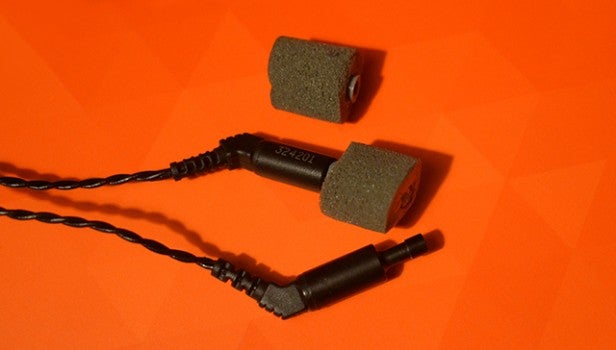 The
Etymotic ER4PT are slightly bright-sounding, with no extra bass down
below to provide a safety cushion to balance out any harshness in the
mids or treble. However, Etymotic isn’t a new starter in the earphone
world; it knows how to tune a driver.

There’s great mid-range
texture and detail to the Etymotic ER4PT. Vocals are lifelike and
“full”, without needing to lean on extra bass for a similar effect – as
some lesser earphones do.

Although £250 may seem like a lot to pay for a single-driver model, when earphones such as the Shure SE425 offer two for around the same price, the mid-range sophistication justifies the ER4PT’s place among similarly pricey peers.

Some
accuse Etymotic’s earphones of sounding a bit “clinical”, but this
suggests there’s something artificial in the sound, of which I found no
evidence. It’s better to think of the Etymotic ER4PT as lean-sounding.
They are a bit uncompromising, but worth savouring if your palate suits. 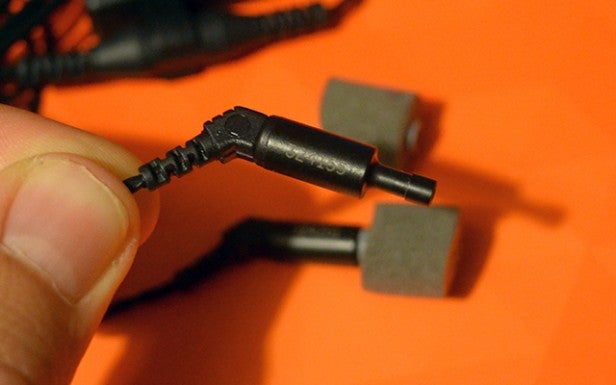 This
sort of signature risks becoming tiring or a little harsh after some
time, which is something I’ve found to be true of the lower-end Etymotic
MK5.

This isn’t the case here. While the ER4PTs don’t have the
silky-smoothness of earphones with a bulkier sound, there’s no sense of
sibilance or hard edges to the treble or mids. I’d expect no less at
this price.

The question is whether you want what they’re
selling. The Etymotic ER4PT offer true high-end sound, and – contrary to
some reports – aren’t anaemic at all. However, on occasion I did miss
the extra sub-bass power heard from rivals such as the Sennheiser IE8i and Shure SE425.

While the ER4PT are capable of pumping out low bass frequencies, the volume at which they do so is generally lesser than most.

When
asked to thwack out more aggressive or forceful music, the Etymotic
ER4PT can seem a little restrained. They lack some of the power of, for
example, earphones with secondary drivers whose entire remit is dealing
with those lower frequencies.

One interesting extra bundled with
the ER4PT in the UK is a converter cable that turns these earphones
into the Etymotic ER-4S. This significantly reduces the output and
flattens the frequency response even further. The character of the sound
is similar, but it’s worth checking out if you have a particularly loud
source or are using a headphone amp of some kind. 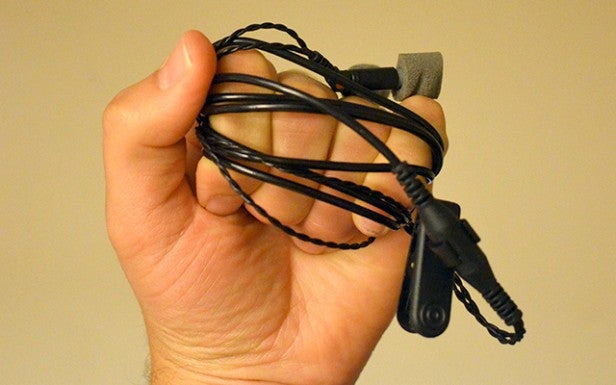 Should I buy the Etymotic ER4PT?

The
Etymotic ER4PT aren’t high-tech earphones, at least not in a way most
people will appreciate. There’s clever engineering at play to get the
earpieces so slim, but the fit is unusual and the lack of a
remote/hands-free may be a deal-breaker for some.

However, they
still have great appeal for the audiophile crowd, which has always been
Etymotic’s core audience. Good refinement and a zero-fat policy helps to
deliver a clean, clear and detailed sound that’s a great pairing for
close listening.

That they exist is all the more important now that the somewhat comparable– but admittedly cheaper – Phonak Audeo PFE 112 Earphones are no longer available.

Elegant-sounding earphones for those willing to trade power for precision.