Life as a convict isn’t easy. Your every movement is scrutinised by guards and hounds ready to pounce. Every day is the same, following a strict routine with a mandatory curfew that confines you to a claustrophobic cell, with only your own thoughts as company. The Escapists 2 offers you a chance to escape this life in a goofy prison simulator, where your job is to walk away unnoticed by any means necessary – even if it means starting a fight, or literally digging your way to freedom.

The sole objective in The Escapists 2 is to, well, escape. Pick from an assortment of maps and you’ll be drafted into a new facility by the warden and his subordinates. Every prison is cleverly designed with its own distinctive style and layout, whether it be a futuristic space station or a sun-drenched desert wasteland. Experimenting with each new stage is a delight, and discovering its inner workings is a worthwhile challenge that, sadly, stumbles into tedium on occasion.

After being hurled into a cell, you’ll be a regular part of prison life. Completing tasks given by superiors to avoid suspicion is critical as you plan your escape. Dropping by the canteen or attending roll-call each day also provides an opportunity to accept quests from fellow prisoners, while kissing up to guards with a bribe or two. Completing favours for others is a big part of The Escapists 2, so it’s unfortunate that so many of the tasks are pedestrian.

I was either tasked with battering a misbehaving prisoner or hunting down materials to craft specific tools. Your rewards for this are a handful of coins that can be used to purchase tools and additional crafting components. These excursions are more of a necessity for enabling The Escapist 2’s finest moments, slowly assembling the ingredients needed to make a valiant break for freedom. To put it bluntly, it feels like I’m grinding to get to the good parts. 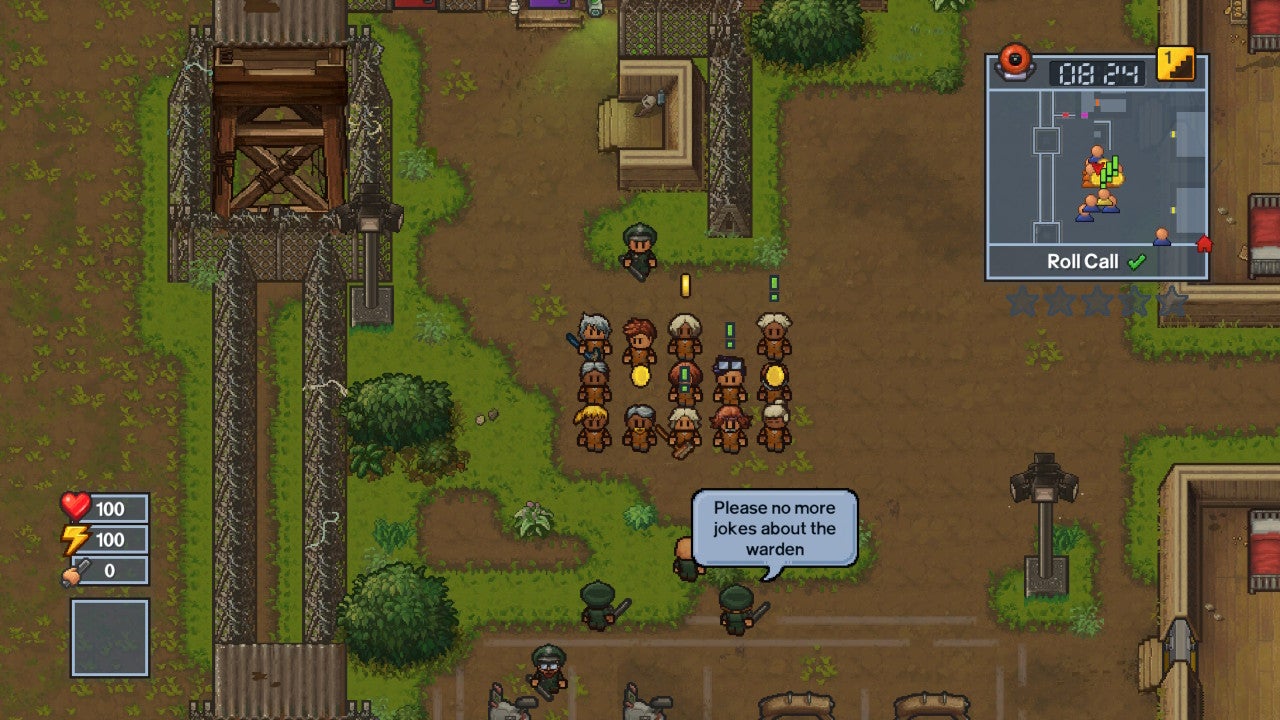 The Escapists 2 makes up for its mechanical monotony with brilliant personality. Dialogue is sharp and witty, with prisoners frequently evoking a giggle or two from me with quest descriptions and zany, unpredictable actions. Watching a brawl break out in the showers and steadily escalate into a full-scale riot is hilarious. The slapstick violence is so silly it’s hard not to laugh, especially when I’m the one dishing it out.

Combat is incredibly simple, executed with a single press of a shoulder button. Different weapons can be used, but there’s little change in the end result besides a bit of extra damage. Your prisoner starts off as a weakling, but daily visits to the gym will increase their strength and athleticism until they’re an unstoppable, law-abiding machine. Intellect can also be raised by reading books, allowing the crafting of bigger and better equipment. Fancy a more durable pickaxe? Get studying!

You’ll need to do plenty of crafting to progress in The Escapists 2. I found myself constantly coming up with new tools for carving holes out of walls and ceilings as I planned my exit. Of course, you also need to cover your tracks, whether it’s a poster covering a wall or a clever disguise for avoiding guards on the night shift. It’s a shame the interface, at least on the Switch, is cumbersome at the best of times. 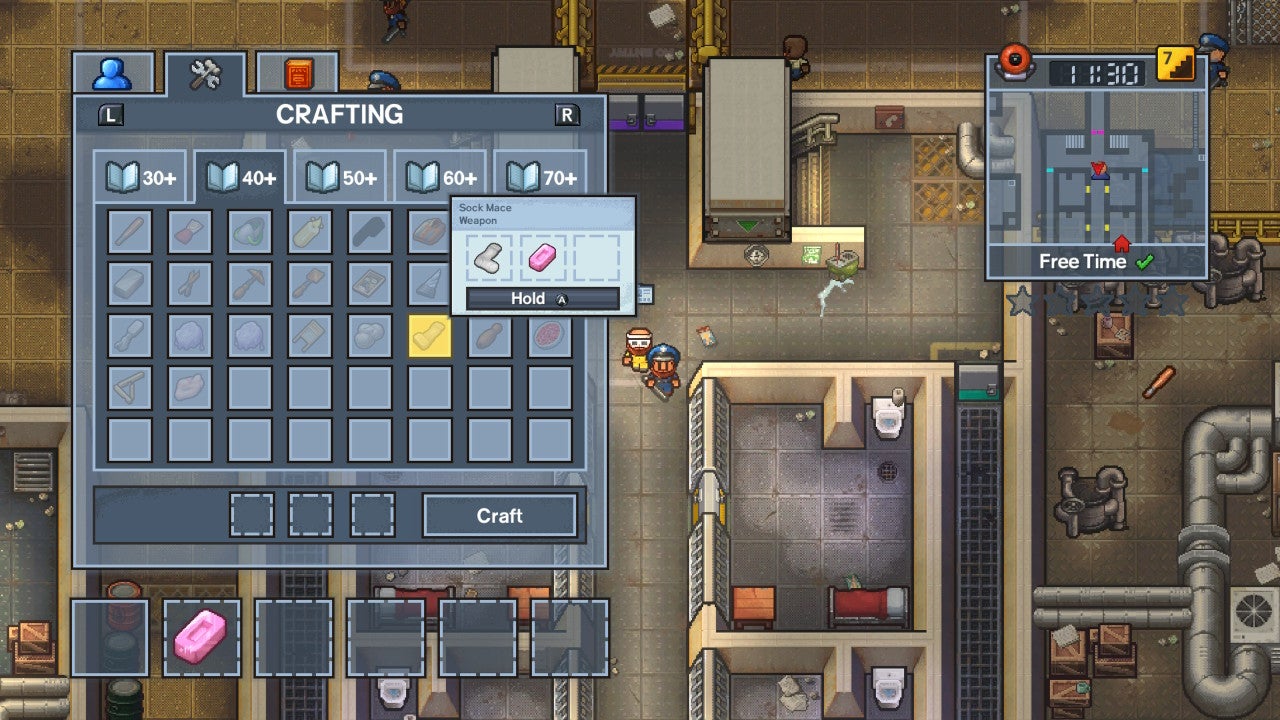 Despite some of its components feeling inconsistent, The Escapists 2 still manages to form a cohesive whole once you finally embark on escaping each facility. It’s so satisfying when a plan comes together. Taking into account dozens of factors and forming a strategy that conquered them all without fail is transcendent. On the flipside, watching it all fall apart in spectacular fashion is equally as fun. The Escapists 2 isn’t afraid to send you back to the drawing board, and is all the better for it.

I had a blast replaying various facilities with a different plan in my head. One day I could be plotting to steal a medic uniform and sneak out unnoticed. The next I could assault a guard, cause a full-scale lockdown, and dig my way out amidst the unfolding chaos.

Dealing with the repetitious tasks that underpin these finer moments is a necessary evil, but perhaps not something everyone will have the patience for. On a portable system such as the Nintendo Switch, however, it’s far more bearable.

When I wasn’t trying and failing to escape, I was customising my avatar and their surrounding prisoners with pixelated likenesses of my family and friends. New customisation options are unlocked all the time as you reach new milestones, such as lasting a certain number of days in prison or completing a specific type of quest. The progression system is rewarding enough that I kept wanting to push forward in pursuit of whatever surprises The Escapists 2 might hold next. 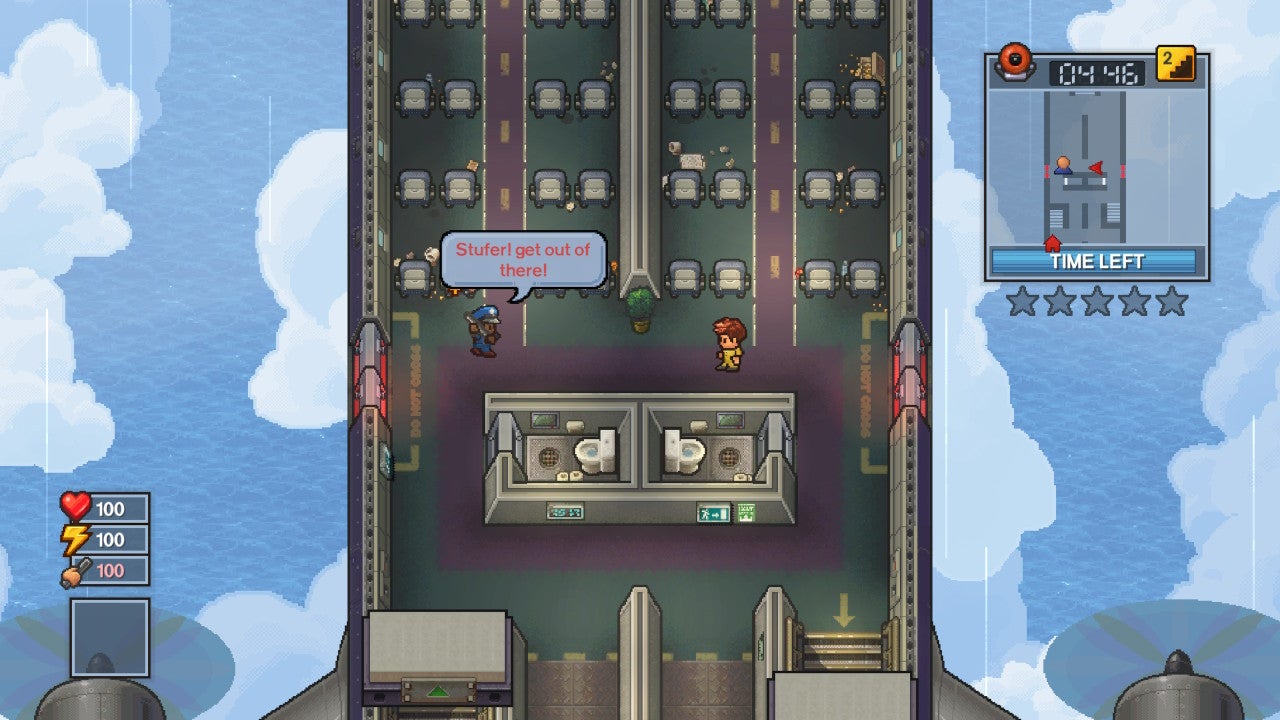 The Escapists 2 is a solid improvement over its predecessor, and a fun prison escapade in its own right. While all of its parts don’t come together in the most ideal manner, busting out of prison remains a blast when you finally manage to conquer the obstacles set against you. Combine that with a staggering amount of variety and replay value, and you have a package that’s well worth going under for.