There are already many ways to watch TV on your iPhone, iPod touch or iPad. You can use online streaming services, or even devices like the Slingbox Pro or Elgato EyeTV. However, Equinox has added another option to that list: the Tizi. It’s a portable TV tuner that runs on its own battery and sends live TV over Wi-Fi to your iPhone, iPod touch or iPad. The advantage of this approach is that you don’t need a fast data connection to the web to be able to watch TV – instead you just need to be in an area that has reasonably good digital TV reception. 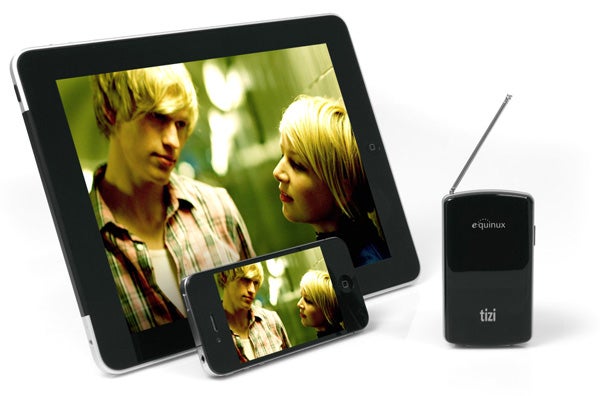 The Tizi is about two-thirds the size of an iPhone measuring roughly 12 x 92 x 52 mm. It’s finished primarily in glossy black to match the current iPhone 4, but also has a chrome band running around the outer edge. It’s a pretty inconspicuous looking device and its small size does make it highly portable.


At the top of the Tizi you’ll find the small, telescopic aerial. Rather weirdly, when you pull it out you’ll find that it’s thinner towards the base than it is towards the top – so the exact opposite of most telescopic aerials you get on portable FM radios. It looks rather odd and feels very flimsy, but it’s made out of exceptionally bendy metal. In fact, Equinux says that you can bend it through 180 degrees without breaking. Certainly, it’s very flexible, although we didn’t want to push our luck by bending it as much as Equinux demonstrates in its promo photos. 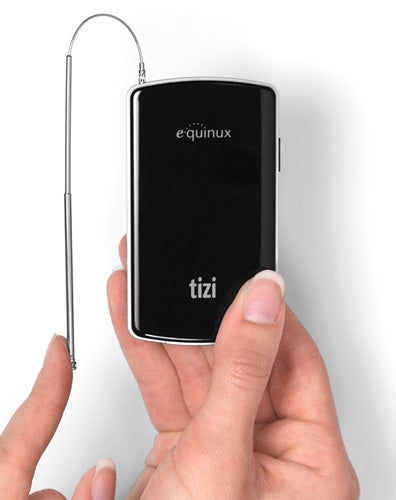 If you slide off the cover on the rear of the device, you’ll find a removable battery inside. Equinux reckons this lasts for up to three and a half hours, but during our test period we found that we got closer to three hours before it needed to be recharged. To charge the battery you use the standard mini-USB port that’s found on the bottom of the Tizi. Unfortunately, no charger is included, so you’ll need to charge it from a laptop or a PC using the bundled USB cable or alternatively your iPhone’s charger.


When it comes to control, there’s only really a single button on the case. This is used for turning it on and off. However, there is a reset pinhole that you can use to reboot the Tizi if everything goes a bit pear-shaped. However, we never had to use this during our test period. 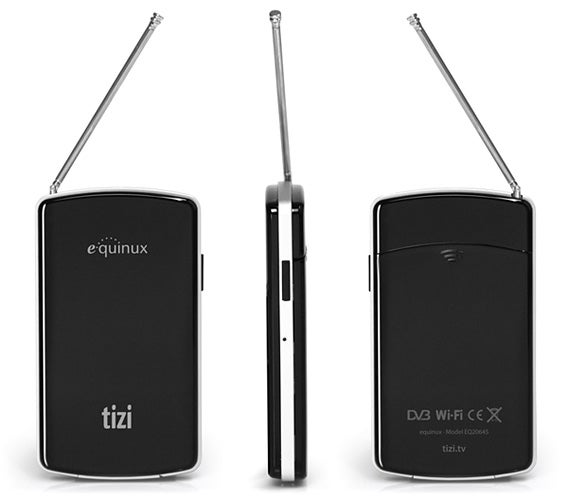 The Tizi works with iPhones, iPod touches and iPads that are running iOS 3.2 and above, so that’s all models bar the first and second generation iPhone and first and second generation iPod touches. Before you can use it, you first need to download the free Tizi app from the App store. Once installed, you start up the Tizi by holding down its power button for a few seconds. A dedicated power indictor LED shows when it’s on and there are two other LEDs to show when it’s connected to your phone and when data transfers are taking place.

The Tizi works by creating its own Wi-Fi hotspot. To connect to it from your phone, touch or iPad you first have to go into the settings menu, deselect your normal Wi-Fi connection and select the Tizi base station instead. The problem with this approach is that if you’re using a device like an iPad or iPod touch that doesn’t have 3G functionality you can’t connect to the Web while you’re using the Tizi, which is a bit of a pain. Another disappointment is that it can only handle a connection to a single device at a time. If there’s already one device using it and another tries to connect, the Tizi drops the stream to the first user to activate it for the second user. 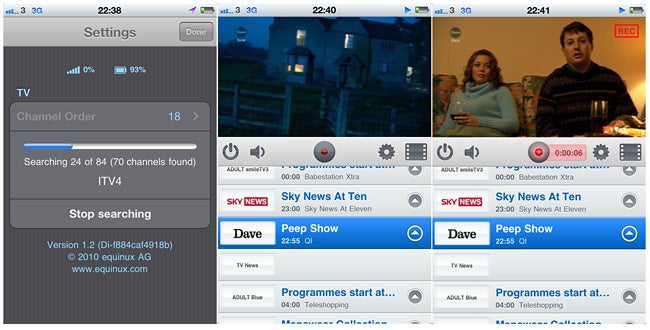 Once you’ve selected the hotspot in the settings screen you then need to launch the free Tizi app. The first time you start it up, it takes a couple of minutes to tune all the channels, after that it usually starts in a matter of seconds.


With Tizi you get access to all the free-to-air standard definition TV channels on Freeview. It doesn’t support high definition and also doesn’t support H.264 video, so in countries such as Ireland and Scandinavia that transmit standard definition channels in h.264 it will show station names, but isn’t able to actually show video. As a result, it’s not quite as travel-friendly as it could be. Also, as there’s obviously no CAM slot you can’t use it to access paid-for services available on DTV in the UK such as the Sky Sports channels. 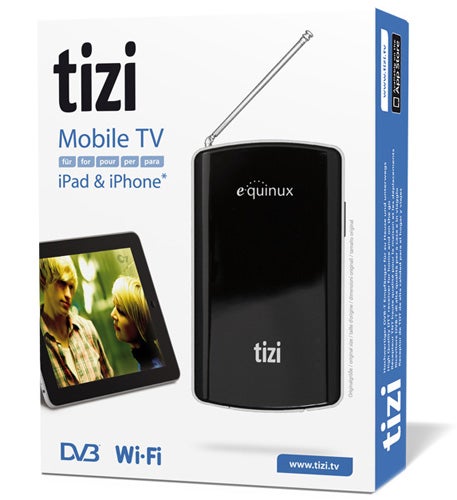 We tried the Tizi in East London and the reception was generally good, but if you use it on the go on a train, you’re likely to suffer from significant picture break-up and blocking. Nevertheless, the user interface for the Tizi app is pretty well designed. In portrait mode, it offers a small TV window with channel names and currently showing programmes listed below. Turn your device on its side and it automatically switches into a full, widescreen view.


Cleverly, the software also allows you to record a TV show to your device’s memory so you can watch it later. However, there’s only a single tuner so you can’t watch one channel while recording another and it’s a little bit limiting and annoying that you can’t schedule recordings of upcoming shows either. But at least if you do use it to record a show, you can watch it later without having to be connected to the Tizi.


Overall, the Tizi works fine, and if it was priced at an impulse buy level we could see it doing well. However, at £149.95 we think it’s very expensive for what it offers, especially as you can view most channels online with your iPhone or iPad for free. Furthermore, given the high asking price, we would have liked to be able to connect more than one device to it simultaneously, schedule recordings and be able to integrate Tizi into an existing Wi-Fi network.