Physically, the two machines are alike, with the gentle black wave of their covers setting them apart from many other all-in-ones at a similar £150 price point. As you open the cover of the Stylus SX610FW’s Automatic Document Feeder (ADF), which becomes it’s input tray, the receiving tray lowers in an elegant dual-action. 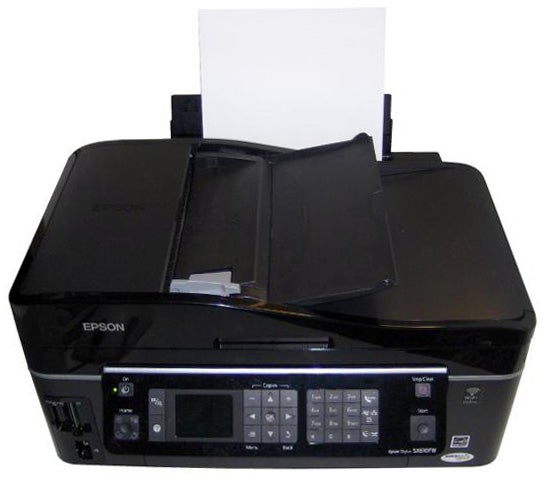 The control panel, which pulls out from the vertical to any of four angles, contains a large, bright, 63mm LCD panel, sandwiched between a square of nine menu navigation buttons to the right and Help and thumbnail Zoom buttons to the left. Further left are illuminated mode buttons for copy, fax, scan and photo upload, while to the right is a fax number pad, fax function keys and a big Start Job button.


Paper feeds from a very steeply-angled 120-sheet tray at the back – that’s 120-sheets of 64gsm paper, so probably nearer 100 of more standard, 80gsm stock – to a telescopic output tray at the front. This increases the printer’s footprint quite a bit, but you can slide it away when not printing. 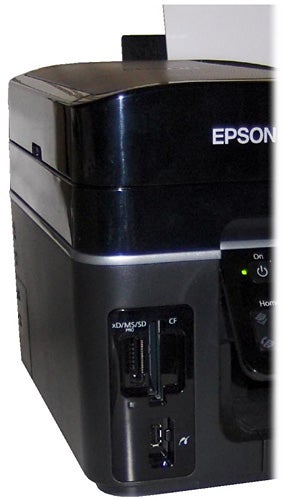 There are two memory card readers mounted vertically in the front left-hand corner, which take most of the common types, including CompactFlash, and a PictBridge socket, which can also read USB drives. At the back are sockets for USB 2.0, Ethernet and fax line, as well as for a third-party handset, if you want one.


Wireless networking is standard on this machine and set-up can be done in two ways. You can connect a USB cable temporarily and let the whole process happen automatically, or link the printer to your network first, entering any WPA passcode from the numeric keypad, and then link the printer to your computer. Windows and OS X are supported, but there’s no indication of any Linux drivers on the Epson site.


The Stylus SX610FW comes with ABBYY FineReader 6 Sprint, which is a well-liked OCR package, but you don’t get the document management facilities supplied by Presto PageManager 8 in the Stylus Office BX610FW package. Both come with various Epson utilities, though, including a useful Web print applet. The four, colour ink tanks plug easily into the head carrier and the machine is then ready to go.

Epson makes silly claims for the speed of the Stylus SX610FW, quoting 38ppm for both black and colour print. Even allowing for the fact the company quotes draft mode speeds, and we test in normal mode, the difference between the specs and our results is very noticeable. Our 5-page black test document returned a speed of 11.1ppm, but on the 20-page job it rose to 14.1ppm, less than half the claim.

It’s a shame the rated speeds have to be so far off what you’ll see in typical use, as the Epson is a good bit faster than most of the competition between £100 and £200. The five-page text and colour graphics document, though slower at 5.4ppm, is still nearly twice as fast as equivalent machines from, say, Canon and HP.


A single page copy from the flatbed scanner took 23 seconds and a five-page copy from the ADF still only took 1min 5secs. Photo print speeds vary between 1min 15secs and 1min 18secs, slower than Epson’s quoted 20 seconds, but still competitive.


Print quality isn’t quite as good as the best of the others, with slight jaggedness around the edge of diagonals and curves. It’s still adequate for most purposes, but you wouldn’t want to use the machine to print a book. 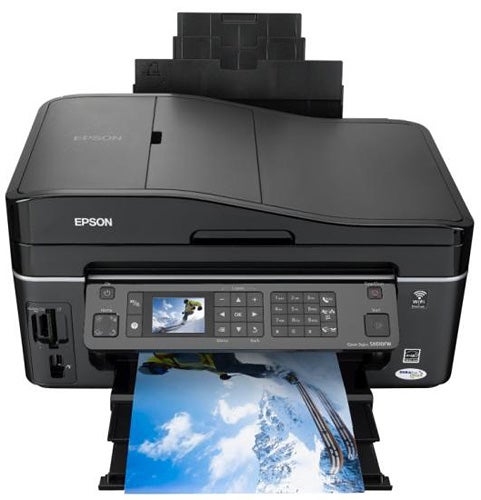 Colour graphics on plain paper are bright and reasonably accurate, though you can see some dither patterns if you look closely. Photo prints are very good, with smooth colour changes, accurate natural colours and plenty of detail in light and darker areas of images


The four inks are the only consumables, but they’re available in two capacities. Using the ‘rhino’ inks, which give better economy, you get a cost per page of 2.4p for an ISO black page and 5.9p for ISO colour. Both these figures are lower than most of the competition, coming in, for example, at over 1.5p cheaper for black and 2.5p cheaper for colour than from the Canon PIXMA MX350.


Choosing between the Stylus SX610FW and the Stylus Office BX610FW comes down to a choice of bundled software. If you prefer the document manager, Presto PageManager 8, go for the Office model, while if you’re more concerned with the OCR quality of ABBYY FineReader 6 Sprint, the SX is the better choice.