You can often pick up a printer bargain by checking out the special offers on manufacturers’ sites. At the time of writing, the Stylus SX425W can be picked up for around £50, which, all things being equal, should make it one of them. So, how equal are all things? 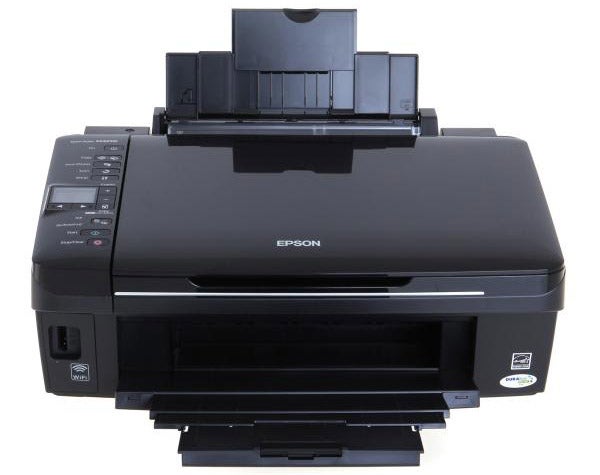 This is a conventionally designed machine from Epson with a telescoping paper support at the back, feeding up to 120 sheets (though that’s 65gsm paper, around 100 sheets of 80gsm) through to another extending tray at the front. You load either plain paper or photo paper in the same feed tray and have to remember to extend the front output tray, before starting to print.


The control panel lies to the left of the flatbed scanner cover, which has a pattern of minute, embossed dots relieving its otherwise piano-black surface. Controls include buttons for power, mode selection, paper size and Start and Stop functions. In the middle of these is a 38mm, colour LCD screen, surrounded by five buttons for number of copies and menu navigation. Although the screen is small, it’s well-used with simple, easily-understood icons.

At the front, below the lip of the scanner section, is a single memory card slot, which can take SD, MemoryStick and xD cards. It would be good to have a front panel PictBridge/USB socket, too.


At the back of the left-hand side panel is a single USB socket, as an alternative to the printer’s wireless networking provision, which is still relatively unusual on a machine at this price. Wireless setup is straightforward and a passcode is surprisingly easy to enter, even though you can only cycle through the alphanumerics with two keys. 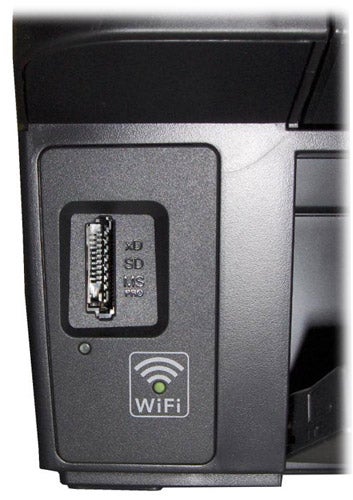 This is a four-colour printer and each of the ink tanks clips into the piezoelectric printhead in the normal, Epson manner. Two cartridge capacities are available, which is again unusual in a machine costing £50.


Bundled software includes a copy of Abbyy FineReader for OCR, in both Windows and OS X versions, and Epson’s Easy PhotoPrint, as well as assorted utilities and drivers. Installation is straightforward, though there’s no sign of Linux support on Epson’s website.

We’re going to resist the temptation to bang on about print speeds again, but suffice it to say that Brother and Epson are the two worst offenders in hyping the speeds you’re likely to see. Here, Epson quotes 35ppm for black print and 15ppm for colour. We saw 5.5ppm for black, rising to 5.6ppm on longer documents, and 1.9ppm on our black text and colour graphic test. 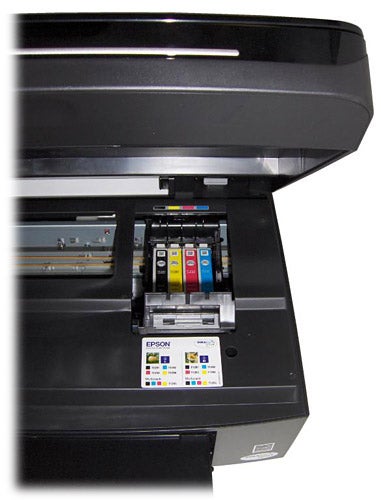 To try and be fair to manufacturers, we added a draft mode print test to our suite a few months back and although the Stylus SX425W ran it nearly three times as fast as a normal mode print, it still only hit 15ppm. To get 35ppm out of this machine, Epson’s test document must have very little text on it. Epson is virtually testing the speed of the paper feed.


It’s also surprisingly slow at printing photos, something inkjets are usually quite quick with. A 15 x 10cm high-quality photo from a PC took 2mins 36secs, but a standard mode photo print from an SD card took longer, at just a second off four minutes. 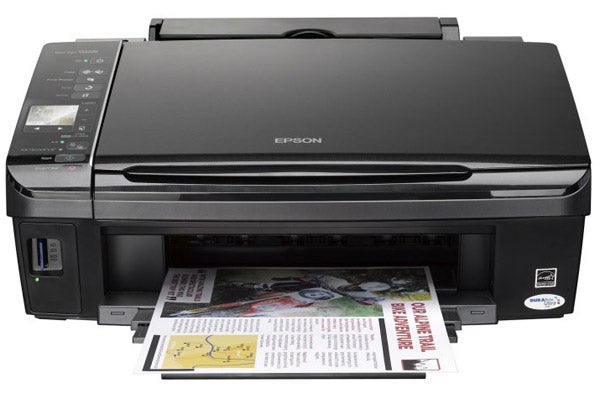 Black text print quality is only fair. Even to the naked eye, characters look jagged, both because of obvious drop placement and because of some spread of ink into the paper. Epson’s DURABrite Ultra inks use pigments for colour, which means larger particles, so there should be less of this ‘feathering’ than from dye-based printers. Draft print is very faint and has a distinct dot-matrix look.


Colour print is generally good, with bright colours for business graphics. Photocopies showed some lightening of colours, though, and a little blotchiness on certain shades. Photo prints were sharp and smooth, with good colour rendition, though darker shades were reproduced too dark. Detail levels were high and photos overall looked natural.


There are two sets of ink cartridges that fit this machine, but using the higher capacity set for better economy gives page costs of 2.7p for ISO black and 7.7p for ISO colour. These are quite good, compared with most inkjet printers under £100, excepting Kodak. If you print a lot of photos, of course, you’re page costs will be noticeably higher than these figures, which are based on five per cent and 20 per cent coverage, respectively.


There are good and bad points to the Stylus SX425W. Its feature set is impressive for a machine in this price bracket, with a colour LCD display, wireless connection and memory card slots. Running costs are also good in comparison with most of its competitors, but print speeds are low, whatever it may say on the box, and print quality isn’t as good as rivals from Canon and HP, or even Kodak and Lexmark.