If you want proof that the design and production of printers is an evolutionary process, look no further than Epson’s SX400. We cheerfully booked this machine in for review when we received the press release, because it was a new model in a competitive area of the market. When we received our sample, though, it looked suspiciously familiar.


If you have read our review of the Epson Stylus DX8400, you’ll have a pretty good idea how this printer looks and performs. The SX400, apparently, has a new ‘colour ID’, which means different shades of dark grey and black for its case. It also has revised paper tray designs, both front and rear.


Tray changes may sound trivial, but in both cases the improved design provides more paper support and, in the case of the feed tray, stops paper flopping forward and acquiring a curve when you’re not printing. 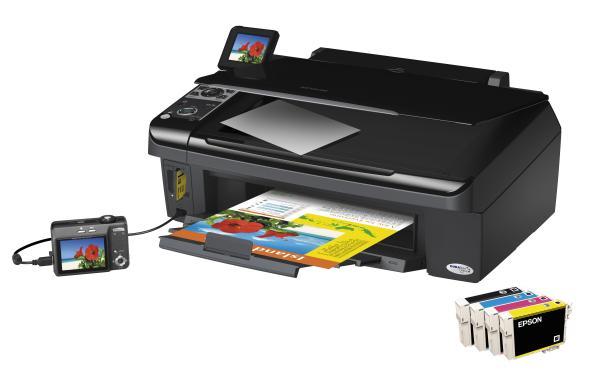 The control panel is identical to before, but was already well laid out, with separate mode buttons for Copy, Memory Card and Photo and a ring of buttons for menu control. There’s a 63mm colour LCD monitor, too, so you can preview photos from memory cards. The images display using a slightly odd double scan, like an old Web page. This suggests the printer’s processor is a bit underpowered.


The Stylus SX400 uses a Contact Image Sensor (CIS) scanner, which has a good resolution for a flatbed of 1,200 by 2,400 and an internal 48-bit colour depth. CIS scanners use sensor and lens strips, together with LED illumination, and avoid the mirrors and cold cathode lamps of CCD-based devices. This means there’s very little warm-up time, but that they can have problems with image depth, if what’s being scanned isn’t perfectly flat.


In the front of the printer are two memory card sockets, for all the usual types, and a PictBridge socket, which is buried rather deep behind the front plastic fascia, making it fiddly to get at. This is true of the single USB PC connection at the back, too.


The Stylus SX400 uses four, single-colour DuraBrite Ultra ink cartridges, which slot into place in the print head. The printer goes through a one-off charging cycle, when you introduce a new cartridge, but there’s no other physical setup.


Epson’s software bundle is pretty comprehensive and includes a copy of Abbyy Fine Reader Sprint 6 for OCR, as well as several of the company’s own utilities for scanning and Web print. The printer driver has been updated with single-click options for tasks like high-quality photo print and standard-quality text print on plain paper.

Epson claims a higher print speed from the SX400 than from the DX8400 for both black and colour, but this is only 2ppm in each case. Since the DX8400 came nowhere near the manufacturer’s claims, we weren’t expecting much from the SX400, either.


Just as well, as the new machine was marginally slower printing our five-page text document, completing it in 1 minute 26 seconds, or 3.49ppm. Our colour text and graphics pages took 1:35, equivalent to 3.16ppm, so in both cases around a tenth of the rated speed. In draft mode the text document took 32 seconds, which is 9.38ppm, so still only a third of what’s claimed. 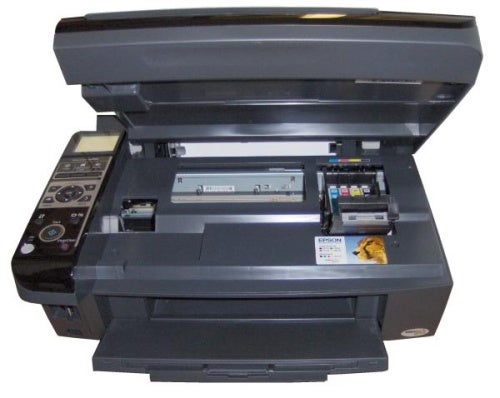 Print in draft mode is so faint you’d be unlikely to use it even for memos and the noise level when feeding paper peaked at well over 60dBA, a good way above the 40dBA quoted in the spec sheet.


Print quality in normal mode is reasonable, though curves and diagonals have small jaggies that give them a slightly fuzzy appearance. Colour graphics are generally good, partly due to the pigmented inks, and text overlaid on colour is well registered. Photo output is detailed, though some shadow details are lost to black. Colours are natural and areas of varying colour change smoothly, with little sign of dithering.


The Stylus SX400 uses the same set of cartridges as the DX8400 and the only variation in page costs is the price these cartridges can be bought for. We priced the black page cost based on the high-capacity black cartridge twin-pack and the colour cost on a four cartridge multi-pack, since these are the most economic options.

The black page cost comes out at 3.10p and the colour at 6.41p. The colour figure is about average, but the black is a little high, with, for example, Kodak’s all-in-ones coming in at under 2.9p.


Marginal improvements to the paper trays and the printer driver aren’t really enough to warrant the price increase of the Stylus SX400 over the Stylus DX8400. While the difference is partly due to the older machine coming to the end of its sales life and the new one just being introduced, there’s over £40 between the two, over a third of the cost of the new printer. It’s hard not to recommend you look around for a Stylus DX8400 and pocket the difference.