If you need an all-in-one printer, but have limited resources, there’s still quite a wide choice of machines at the entry-level. Epson’s Stylus SX100 is a shiny black and grey model, offering basic facilities at a modest price.


This is a small all-in-one, following a very conventional design. Paper feeds from a fold-up paper tray at the rear, through to a fold-down paper tray at the front. A Contact Image Sensor (CIS) scanner handles documents up to A4 and there’s a simple but adequate control panel down the left-hand side. This includes separate buttons for black and colour text copies and one for a colour photo copy. 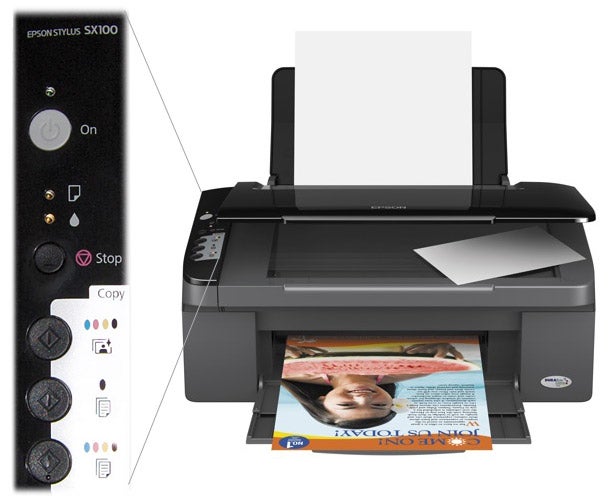 There are no facilities for connecting a PictBridge camera and the only connection is a USB 2.0 socket at the rear, but at least you don’t have a power adapter block kicking around under your desk, as Epson has always built its power units inside its printers.


Hinge up the scanner section of the machine onto its spring-loaded ‘bonnet stay’ and you can clip the four, separate ink cartridges into the head carrier. Software installation is just as simple and there’s a copy of ABBYY Finereader for OCR, as well as useful tools from Epson for printing Web pages and basic photo editing.


We don’t want you to think we’re having a go at Epson, but the speed claims the company makes for this printer are more ridiculous than any we’ve seen before. According to Epson, the Stylus SX100 can print black text at up to 26ppm and colour at up to 14ppm. 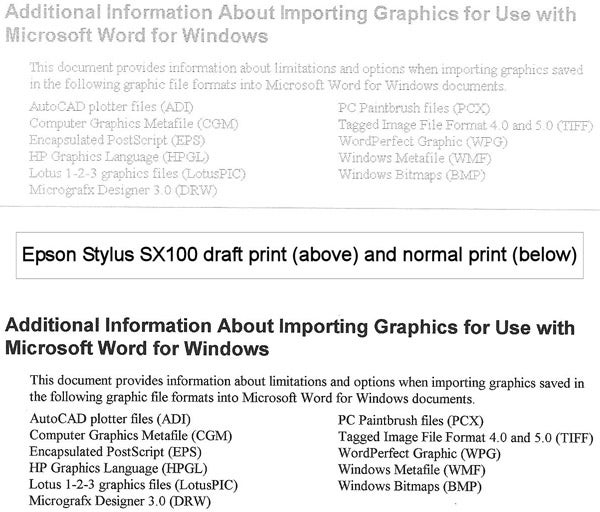 
These prints are in normal print mode, which most people use most of the time. If you’ve seen typical draft output from this printer, you can see why – see above for an example of both draft and normal print.


To be completely fair to the company, we repeated our five-page text print in draft mode and removed the six seconds processing time before pages started to feed. The Stylus SX100 still only managed 13.6ppm, half the rated speed. To be able to get close to 26ppm, the text document would have to be very short, no more than a couple of lines. All you’re really measuring then is paper feed speed.

The results we saw aren’t just slow for an entry-level inkjet, they’re probably the slowest we’ve seen for any printer since we started testing. For comparison, the PIXMA MP190, Canon’s entry-level all-in-one, produced 6.34ppm for black print (2.7 times the speed of the SX100) and 2.27ppm for colour (2.8 times the SX100). Even the Lexmark X2650, currently costing around £35, produced measured speeds of 5.36ppm for black print and 1.34ppm for colour. 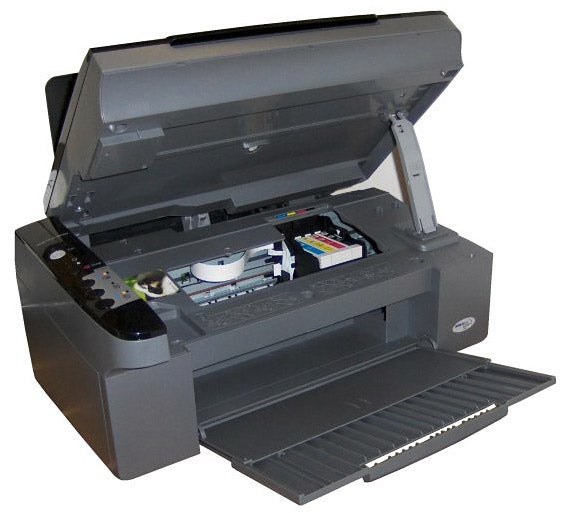 Speed isn’t everything, of course and print quality can change the overall complexion of a printer. Text output from the SX100 is fair. Though there’s some jaggedness to curves and diagonals when you look under a loupe, there’s little problem to the naked eye. Colour business graphics are bright, though there’s some slight banding in areas of solid colour.


A colour photocopy proved disappointing, with colour much lighter than the original and exaggerated banding in areas of solid colour. Scanning to an image file from the 600 x 1,200ppi flatbed showed similar reproduction, though scanning text was fine for OCR.


Photo prints are one of Epson’s fortes and here they are natural in colour and sharp and well-defined in detail. Colours in skies vary gently and, as long as you’re prepared to wait, you can get very acceptable photo prints from this machine. 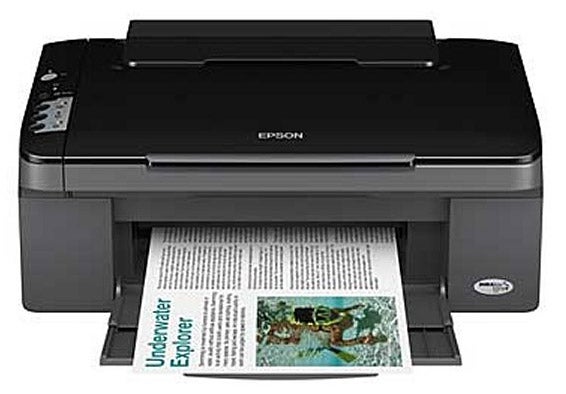 Finally, there’s the noise level, which Epson quotes at 42dBA, but we measured at peaks of 66dBA at 0.5m when the printer was feeding paper. This is noisy enough to make talking on the phone difficult if the printer is working on the desk beside you.


There are two sets of cartridges compatible with the Stylus SX100: the recommended T0891, 2, 3 and 4 and the higher yield T0711, 2, 3 and 4 series. Using the high yield cartridges for better economy produces page costs of 2.89p for black and 7.79p for colour, both including 0.7p for plain paper.


These costs are good, even allowing for the recent VAT reduction which brings them down marginally in comparison with printers reviewed some while ago. You’re not being stung for high consumable costs, just because the purchase price of the machine is low.


There are some good points about the Stylus SX100 such as its compactness and the economy of its individual cartridges but these are largely outweighed by its lack of any sense of urgency. We’ve never had a printer which took eight and a half minutes to print 20 pages of text before, nor one which took six and a half minutes to copy a 15 x 10cm photo. There may be some customers who print only occasionally, where speed has no real relevance, but this is surely a very niche market.