After the successful launch of the RX520, a photo-targeted all-in-one device, Epson has come up with its larger, more capable cousin, the RX640. As well as being able to print, scan and copy, this machine can upload or print from memory cards or a PictBridge camera, scan and print transparencies and negatives, and print to CD or DVD blanks. It also prints in six colours, compared with the RX520’s four.


Adopting the conventional design for a multi-function device, with a flat-bed scanner mounted above an ink-jet print engine, the RX640 feeds paper from a 100-sheet feed tray at the rear to a telescopic output tray which extends from the front, once the front cover is opened.


Just above this cover is the memory card reader, with a swivel down, smoked plastic cover. It can read all the common types of card, including MicroDrive and xD. The control panel is comprehensive, with arrays of buttons in circles and crosses and a big one to start jobs. It’s easy to get the machine to do what you want.


The RX640 comes with its USB cable pre-plugged, so all you need do is connect the other end to your PC and plug in the mains cable. Software installation is a bit longer-winded than some, as it includes Arcsoft PhotoImpression for photo and scanning support and several useful Epson applets. 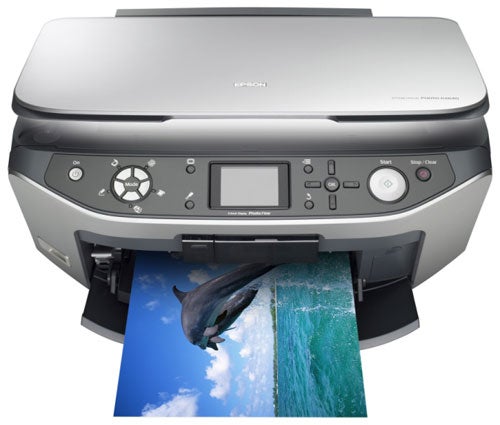 Printing from a PC is straightforward and printing directly from photos on a memory card or in a digital camera is well guided via the RX640’s excellent, 63mm, bright LCD display. Scanning and copying are also pretty simple and you can scan from transparencies or negative strips, using the supplied holder.


Printing directly to CD needs a bit of setting up, by flicking the output tray into a secondary position and slotting in a disc holder, again included in the box. You’ll also need special CD blanks, of course, which are designed for ink-jet printing. These are coming down in price, though they’re currently around 25p per disc for well-known brands.


Print output quality falls into two parts: plain paper and photos. Printing black text on office paper produces a slightly irregular look to the text and when looked at under a magnifier, the print is not as smooth as, for example, from the Canon Pixma MP170. It’s still good enough for most general-purpose printing, though, and photo printing is the RX640’s primary mission.

Photo output is generally of a very high quality, with vivid colours where they’re required, but also accurate reproduction of softer shades, with perhaps a slight emphasis to magenta. Darker shades are a little over-emphasised, so some detail is lost.


A final word on print quality of copies. Taking our mixed text and colour graphics test piece, we copied it at standard settings and were disappointed to see all the colours reproduced much lighter than the original and a green graphics border changed to light blue. Given Epson’s history of scanner development, this was unexpected, but in line with our experience of the RX520.


Print speeds are generally low. Our five page test piece took nearly two minutes, giving only just over 2.5ppm. The text and graphics print took even longer and give a speed of under 2ppm. Even photos, which you might expect to print quickly on a photo printer, took a long time. A 15 x 10cm print took two minutes, nearly twice as long as with some rival devices. 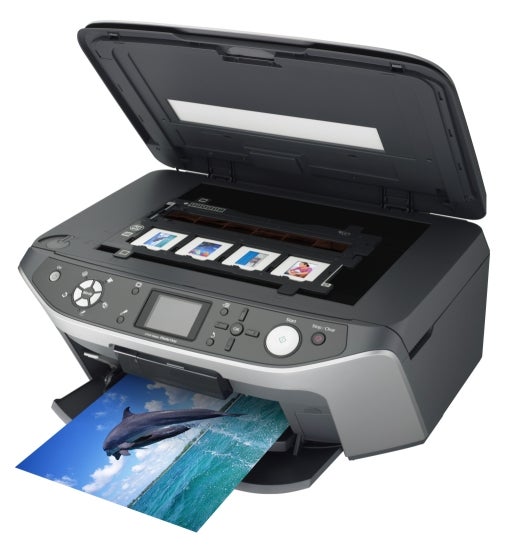 Epson is in the process of switching to ISO test pieces for its page yield estimates, so none were available at time of test. However, in comparison with the Stylus Photo R300, tested about a year ago and using the same cartridges, we produced more pages on the RX640. We achieved 558, 5 per cent black pages and 630 in colour at 30 per cent. These figures look impressive, but bear in mind, if you’re only printing occasionally, they are likely to drop. In typical use, the RX640 will perform more head-cleaning cycles than on our testbench.


The main component of photo printing costs is the price of glossy photo paper and we’ve managed to find a cheap source of branded Epson paper from Amazon. This can cut print costs dramatically.


When working out the cost of printing black pages, we have to take into account that the RX640 lays down some colour to improve the density. In our tests, it used about 20 per cent of the cyan, magenta and yellow cartridges, while emptying a full black cartridge. This gives a five per cent cover, black page cost of just under 2p and a six colour, 20 per cent cover colour page cost of 23.5p. These figures are both competitive and are based on the cost of a six-cartridge multi-pack, which is the cheapest option for consumables.


There’s no doubt about the functionality of the Stylus Photo RX640; it’s a very versatile machine. As well as the big four functions of printing, scanning, copying and uploading photos, it adds transparency and negative scanning and printing to CD and DVD. It’s a bit slow, but is cheap to run and worth considering at discount prices.