If the numbers of ink colours manufacturers build into their high-end photo printers goes on increasing, there’ll be one for every conceivable colour before long. If you don’t believe us, witness the Epson Stylus Photo R2880 and its new UltraChrome K3 ink system. It uses a mammoth eight colours, including a ‘vivid’ magenta, two grey inks and a choice of blacks, making it ideal semi-professional and professional photo printing. 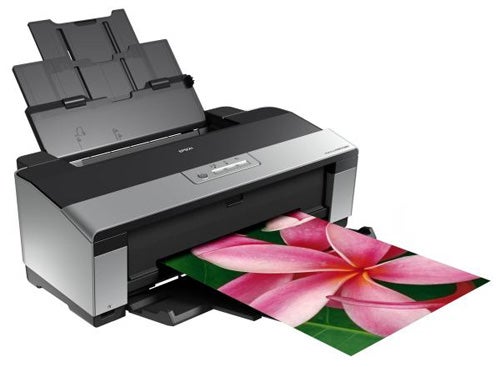 This is an A3+ printer and given the maximum paper width of 13-inch, it’s not an unduly wide machine. With all its trays open, it’s 415mm deep, so you’ll need a fair sized desk, but if you only occasionally print on large sheets, you can keep the three-stage telescopic feed and output trays partly closed and still print.


The control panel is simple, with four buttons and three indicators. One of the buttons is for feeding paper from a roll – roll holders are provided as standard. Paper can also be fed from the rear feed tray or from front or rear manual trays, where the paper path is flat. Epson supplies a CD/DVD carrier, too, for direct printing on coated discs.


There’s a PictBridge socket at the bottom of the front panel and, uniquely in our experience, twin USB sockets at the rear, so both a PC and Mac can be connected simultaneously. Should the printer receive data through both ports at the same time it handles the queuing, so you won’t lose print jobs because of this feature.


There are eight cartridges to plug into the head on this printer, with the standard cyan, magenta and yellow supplemented by light cyan and light magenta. There are also two greys – or as Epson quaintly calls then, light black and light, light black – designed to improve the quality of greyscale prints. 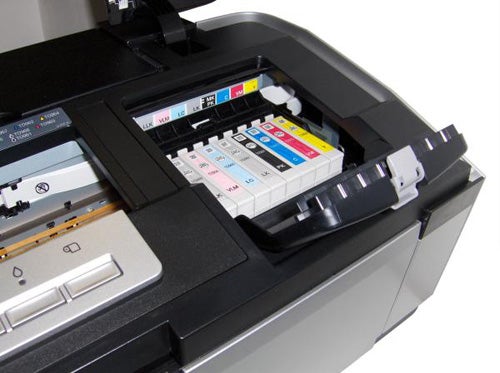 Magenta and light magenta inks are described as ‘vivid’ and can intensify flesh tones and a range of other shades. Also available are one of two, full black inks, described as matte and photo black. The matte ink is designed to give the best black text print on plain paper, while the photo black is the better bet when printing colour or black and white photos.


You can swap black inks whenever you want, though the printer does waste some ink, through cleaning, on each change. You don’t need a special holder for the cartridge, as there’s a valve within it to stop it drying out.

This printer is intended primarily for printing photos at the semi-professional and even professional levels, so plain paper print is very definitely a secondary function. Epson doesn’t even quote print speeds for black or colour plain paper print. Printing our five-page black text document took two minutes, 17 seconds and the black text and colour graphics took two minutes, 45 seconds, giving real-world print speeds of 2.2ppm and a 1.8ppm, respectively. These are both pretty slow.


A 15 x 10cm photo print from a PC in high-quality mode took one minute, 45 seconds, which is more respectable and in normal print mode, printing from a PictBridge camera, the Stylus Photo R2880 took one minute, which is quick. Increasing the print size to A4, the printer still managed to complete the print in one minute, 59 seconds and going right up to A3+ (the largest paper size it can handle), it took four minutes, 13 seconds. 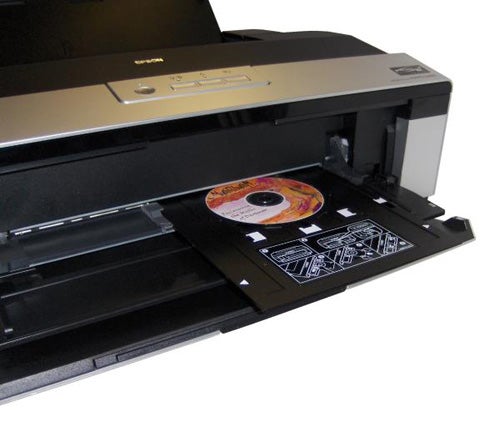 
Print quality from Epson’s eight-ink, UltraChrome K3 system is very impressive. Both the vivid magenta and vivid light magenta inks do improve the quality of flesh tones, as well as a range of colours from reds to purples. The light inks do their job in helping with pastels and the extra greys make black-and-white prints sharp, with good greyscale neutrality and very little sign of colour casts.


With eight inks to service, we didn’t expect print costs to be particularly low, but were surprised to calculate an ISO black page cost at 2.2p and an equivalent colour cost of 7.8p. These ISO tests are based on coverage of around 5 percent black and 20 percent colour, both of which are hopelessly low for photo printing. Even so, from our calculations, we would expect photo costs to be more than competitive with other medium-format printers in the same price range.


Again comparing with the Canon PIXMA Pro9000 Mk II, which has equivalent costs of 3.2p and 9.1p, the Epson machine comes out quite a bit cheaper to run.


Epson has had an enviable reputation for its medium and wide-format photo printers for many years and the Stylus Photo R2880 continues this tradition. Epson has concentrated on the areas most photographers will buy medium-format photo printers for, and has improved flesh tones for portraiture and greyscales for high-quality black-and-white prints. Allied with this is the versatility of multiple paper paths, roll paper handling and direct print of CDs and DVDs. Although a little more expensive than some of its rivals, our tests would say it’s worth the extra outlay.