You might be forgiven for thinking that Epson’s Stylus Photo R265 is an all-in-one machine, it’s that bulky. Quite why it has to be as high off the desk or as deep in its body is hard to fathom, but as long as space isn’t a problem, at first sight it has a lot to offer.


Coloured in black and silver, the machine really is substantial, with what is styled to look like a control panel running the full width of its front. There are only three buttons, for power, ink replacement and page eject, set at its centre, though. Behind the panel is a large, silver top-cover, which lifts to reveal a cartridge carrier with six, push-fit, colour ink cartridges. As its name suggests, this is a photo printer and includes light cyan and light magenta inks as well as the four main colours.


At the back, a hinged cover folds up and extends to become the paper support and at the front, a click-down panel opens to reveal a telescopic output tray. A lever at the side of this tray shifts it up into a fully horizontal position, where it can be used as a support for the supplied CD/DVD carrier, for direct disc printing. 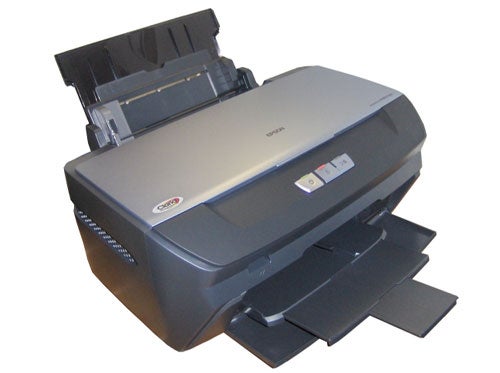 Just above the output tray is a PictBridge socket, so you can connect your digital camera directly to the printer to print photos. Otherwise, there’s a USB 2.0 socket at the rear, for connection to your PC.


The usual array of Epson software is bundled with the Stylus Photo R265, including Web-to Page, which helps print web pages so you don’t lose the right-hand edge of each one, and Easy Photo Print, which offers multiple images per sheet. Set up is simple, as you just clip in the cartridges, run the CD and plug in the printer.


Epson claims a lot for its Claria, dye-based inks, including that they’re very smudge and water-resistant. This is true of most dyes when used with absorbent paper, of course, but you shouldn’t have any trouble with smudging here, even if you stack prints straight from the printer.


The company also claims fade resistance of 200 years, but in an album. This means the test prints were covered and kept mostly in the dark when tested; you would expect long life under these conditions.

The prints we produced were of fair quality, though photo output was definitely better than text or graphics. The text pages showed quite irregular characters and in some cases you could see mis-registration between lines of print. For general use, they’d probably be OK, but the output is definitely not among the best we’ve seen. Colour graphics were much better, cleanly reproduced and with good solid fills and no notable dither patterns. The paper nap showed through in places, though.


A photo printer should obviously be best at photographs and the images we produced were sharp and well-coloured, though some of the shadow detail was lost. In borderless prints, images were rather over-enlarged and edge detail printed off the paper.


Print times were also fair, when the printer wasn’t performing cleaning cycles, but it did this at the start of several print runs, even though they were all undertaken within a few minutes of each other. The times we recorded were best case runs but, for example, our first 15 x 10cm print run took two minutes 24 seconds, with 16 seconds of that being the printer’s preparation time. 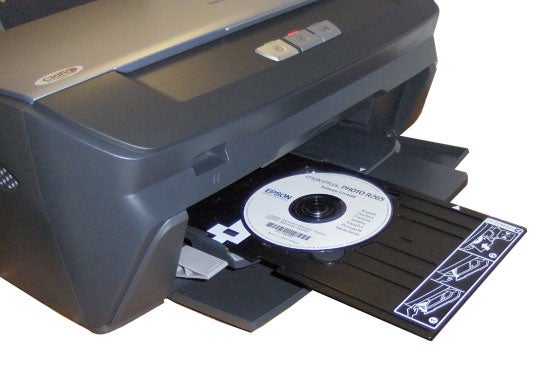 Epson has started to quote its page yields based on the new ISO standard. Not all printer manufacturers are doing this, but to give you some idea, the standard uses a mixture of photographic, text and line art elements, so the rate of use of each colour of ink varies. The figures quoted for the Stylus Photo R265 are 300 pages for black, 900 for cyan, 440 for magenta, 460 for yellow, 410 for light cyan and 590 for light magenta.


Currently, TrustedReviews uses test pieces which print exactly five per cent coverage for black or a colour and with these pages we produced 201 black pages and 225 colour ones. This gives a page cost of 3.85p for a five per cent black text page and 62p for 25 per cent colour. Both figures are high, but if you normalise the coverage for colour to a four-colour printer, where you have 15 per cent colour applied, the colour print cost comes down to 41p, which is more reasonable.


While the Stylus Photo R265 reproduces photos well for robust finished prints, plain text printing is not nearly as good, running costs are higher than average and print speeds are not impressive. Although the price of the machine is low and you have the convenience of CD printing, there’s better value to be had, even at this comparatively low price point.