Making a photo inkjet printer into an all-in-one could be a fairly mundane adaptation, but Epson has decided to use the opportunity for a design rethink in producing the Stylus Photo PX800FW. Although aimed primarily at the six-ink photo enthusiast market, it includes useful business features, such as the Automatic Document Feeder (ADF) and CD/DVD tray.


This is an all-in-one machine with attitude, from its low-profile, black exterior to its long, wide touch panel, which hinges out for control. The gentle slope of the black plastic cover rises and falls as you open the ADF in a neat, if slightly creaky, way. 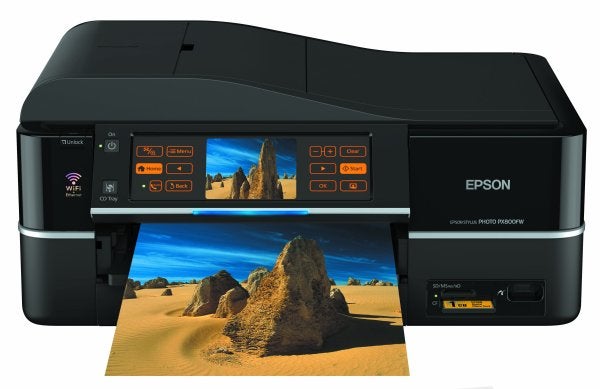 Once open you can load documents for scanning of up to 30 sheets, though Epson quotes a paper weight of 64gsm, which is considerably thinner than anything regularly used in UK offices. If you want to get to the scanner flatbed, the lid is cleverly indented into the printer’s top surface to reduce its overall height.


The long, wide control panel ratchets up to display at a variety of angles. At its centre is an 89mm LCD display and around this are predefined touch buttons, which illuminate orange, as required. There are only two physical buttons, for power and the CD tray. Rather than having a separate CD holder you have to locate and slide into the front of the printer, the Stylus Photo PX800FW has a slim grey tray that slides out when you press the CD tray button.


The paper tray, unusually for Epson, slides out from the front, underneath the control panel, and takes up to 120 sheets of very thin paper and up to 20 sheets of glossy photo paper in a separate tray, integrated on top. To the right of the paper tray is a two-slot memory card reader and a PictBridge socket.


At the back are sockets for USB and Ethernet, as well as for phone line and handset, as fax functionality is built in as standard.


WiFi connection is also provided, but the setup routine, which involves a cabled connection to a router, is more complicated than it should be. There’s no reason why a wireless enabled all-in-one, particularly one with a good control panel, should be able to detect wireless networks and log itself in to whichever you select. Printers from other manufacturers do this.


The standard bundle of Epson software is provided with this machine, including utilities for CD/DVD printing and printing from the Web. There’s also a copy of Abbyy Finereader Sprint for OCR.

Epson explains in its spec sheet that its print speeds are measured in draft mode and without taking into account processing time. Our tests are measured in normal mode and do take account of processing time, since you will have to, when you print. We saw a maximum black text print speed of 7.74ppm when printing a 20-page document, which is OK, but not exceptional. What is more impressive is a colour print speed, which is nearly as quick at 6.12ppm.


However the most impressive performance of all is the speed at which the machine can produce a 15 x 10cm photo print. By plugging in SD card in the front, we produced a very acceptable photo in just 21 seconds. This is far and away the fastest photo print we’ve seen from an all-in-one this year. 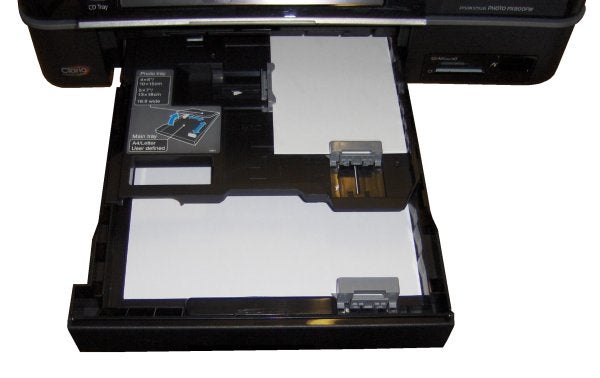 If it had been a rubbish print, we wouldn’t have been as amazed, but it shows very good levels of detail, strong but natural colours and no noticeable blemishes we could see. The other photos in our tests are similarly good, though are standard test photo from a PC produced rather dark shadows.


Print on plain paper is fair, though Epson has never been king of the smooth, jet-black text page. There’s a slight jaggedness to the characters here and text looks dark grey rather than inkjet black, perhaps because of the use of a dye-based black ink as part of the Claria set. Colours on plain paper are generally good, though we did notice mucky bands in areas of solid colours based on yellow. The printer was supplied with its cartridges in place and this might have caused some slight black-on-yellow contamination.


There are six colour inks in this machine, with light cyan and light magenta added to the normal CMYK four. For some reason Epson recommends a lower-capacity set of six inks, types T0801-6, though the machine is capable of running with the higher capacity T0791-6 set, which works out cheaper. These are the inks we used in calculating running costs. 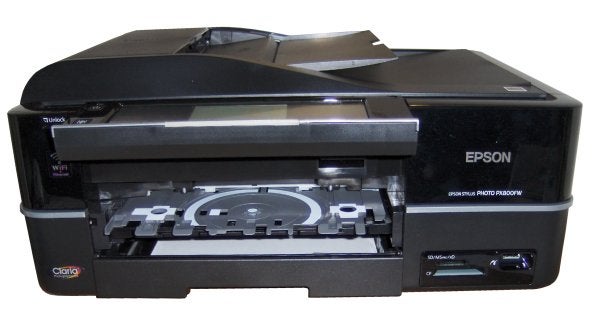 An ISO black page should cost you just under 2.5p, which is a good mid-range price for an inkjet, while an ISO colour page works out at 10.2p, which is quite a bit higher than from normal four-colour inkjets. They average around 7.5p, with all costs including 0.7p for paper.


This is an excellent bit of design work from Epson, producing a smart and effective photo all-in-one, with the extra facilities of dual-paper feed, CD/DVD printing and a convenient touch-panel for control. There are one or two hitches, including wireless installation and the level of noise the machine makes, but neither are enough to deny it a Recommended Award.