All-in-one printers aimed at the photo enthusiast are getting more and more sophisticated and Epson’s Stylus Photo PX710W has taken up the challenge laid down by the latest Canon and HP machines. It’s also taken up their large footprints.

The PX710W is a big, black beast, with nicely rounded lines and an inset scanner, which sits below the top of the control panel. The scanner top has an attractive matt finish, with high-gloss black dots and a gloss surround.


The control panel, which can be hinged up and locked in any of seven positions, though with a rather spongy feel, has a bright, 63mm LCD screen with a large bold square of nine navigation buttons to the right and two, specialist selection buttons to the left.

Further left is a four-way mode-selection button, a power button and one to bring forward the integral, powered CD/DVD tray. To the right of the navigation square is a large Start button and one to cancel print jobs.


At the bottom right of the front panel are twin memory card slots, one for CompactFlash cards, and a dual-function PictBridge and USB drive socket. The paper tray, which can take around 100 sheets of plain paper, has a second, photo tray integrated with it and you can leave both trays loaded with paper and switch between them through software. 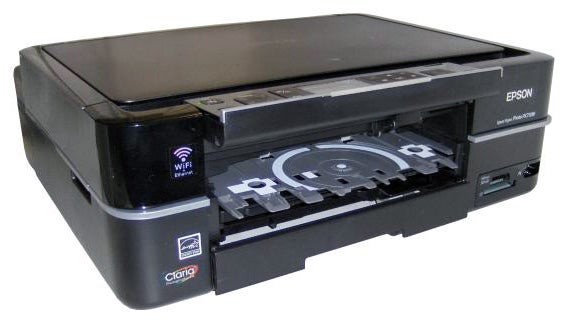 The output tray is a telescopic affair, as is normal width Epson printers, but this one pulls out from behind a flip-down cover, which can be closed up when the printer is not in use. At the back are sockets for USB and Ethernet, but many purchasers will choose to use the wireless connection. 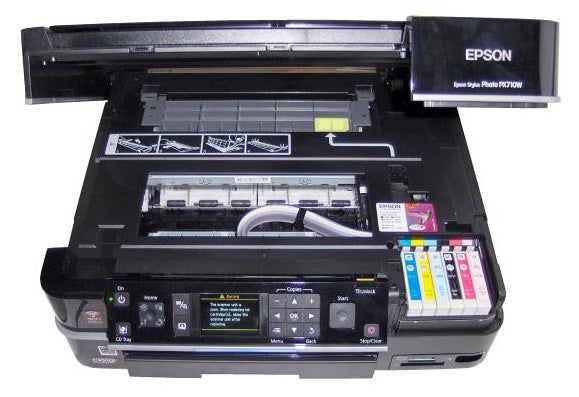 This is a six-ink printer and, unusually for Epson, all six cartridges plug into a stationery holder, which links to the piezoelectric head through flexible tubes. It only takes a moment to plug the cartridges in, though head alignment isn’t automatic and you have to enter numbers to pick the best samples from a print out.


The PX710W comes with drivers for Windows and OS X and linking for a wireless connection is very easy, using Epson’s firmware Wizard. Software installation, which includes a copy of Abbyy Finereader, is unusually slow, but at least you only have to do it once.

Do you know of any inkjet printers which can produce 40 pages per minute? We don’t and, despite Epson claims, this one is a good way short, unless you print very short documents in draft mode.


Our five-page text document took 45 seconds to complete, which is a speed of 6.67ppm and the 20-page document didn’t do a lot better, producing a speed of 7.41ppm. These speeds are quite respectable, when compared with the machine’s main rivals and it’s a shame Epson feels it has to exaggerate them. 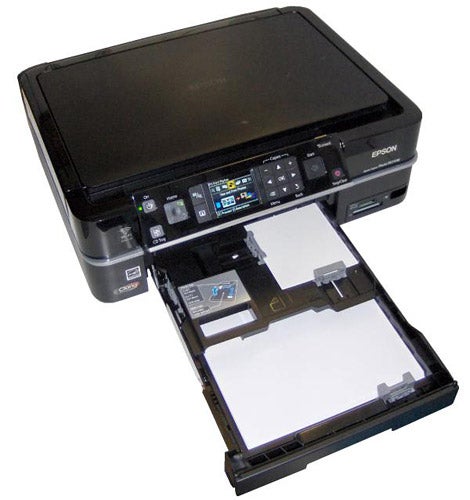 It doesn’t slow down a lot when you print colour, either, still managing 6ppm in our test and a single page colour photocopy completed in an impressive 19 seconds, almost twice as fast as some of its competitors.


Epson also claims the machine can produce a 15 x 10cm photo in 10 seconds. We didn’t see anything faster than 25 seconds, but then we didn’t try printing in draft mode – why would you want to print a photo on expensive photo paper in draft mode? 25 seconds is still better than print times from equivalent Canon and HP machines.


With Lexmark’s new Vizix print engine lifting the quality of its new all-in-ones, it’s left to Brother and Epson to fight it out for the poorest plain paper print ‘accolade’. Text quality from this Epson machine is better than from many of its previous inkjets and letter formation is much better than before. There’s also less visible feathering, but the problem now is that the text looks grey rather than black. 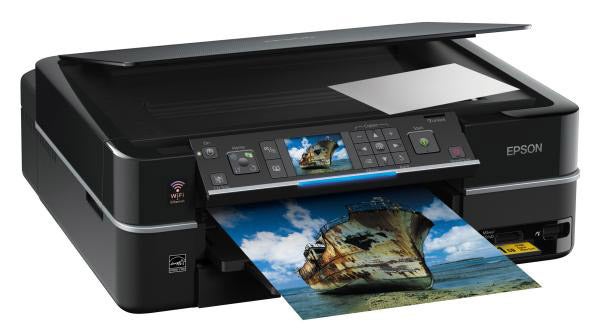 This is true of text on all-black print outs and those with colour components, but the colours themselves are relatively insipid, too. Text over colour registration is good, but a colour photocopy was quite a bit paler than the original.


Epson still does a great job with printing photos and there’s very little to complain about in the natural colours, sharp detail and smooth colour transitions in our samples.


With six cartridges to buy to keep the PX710W running, you might expect the running costs to be comparatively high but, as long as you go for the high yield ‘owl’ cartridges rather than Epson’s recommended ‘hummingbird’ set, you can get good economy.


We calculate an ISO black page to cost around 2.89p and an equivalent colour page should be available for 9.89p, both including 0.7p for paper. This is over 1p per page cheaper than Lexmark’s Prevail Pro S705 on black print and 0.3p on colour, though against the HP Photosmart Premium C309g, it’s over 1p more expensive for colour.


There are many attractive features about this machine, including its low profile, easy wireless connection and well integrated CD and DVD print facility. It’s a quick printer and, although it’s not one of the best plain paper machines we’ve tested, it produces excellent photos.