Epson now has a range of big, black all-in-ones and the Stylus Photo PX650, as the name suggests, is aimed at home photo enthusiasts, though it can turn its heads to regular document print, too.


This machine is a curious combination of conventional and more innovative design. The paper path is classic Epson with a 120-sheet feed tray at the rear delivering paper to the six-colour print heads and hence to a telescopic output tray, which slides out from the front once you’ve folded down a full-width front cover. 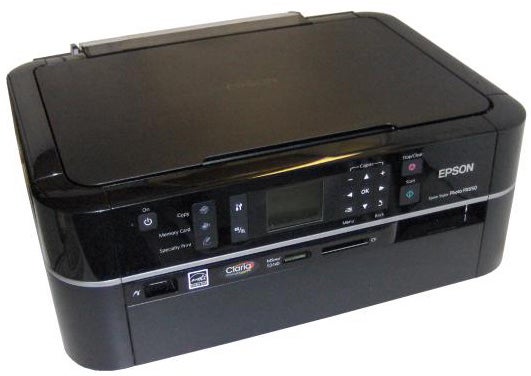 The flatbed scanner is nicely integrated into the top of the machine, giving it a flat top with a stylish dot pattern on its lid. The full-width control panel hinges up from the front and can be set at eight different angles to suit your use.


There’s a large power button at the left end, and moving right there are three illuminated mode buttons for copy, memory cards and speciality print, such as CD and DVD labels. A 63mm LCD display sits close to the centre of the control panel, with a square of nine navigation buttons to its right. Finally, there are two buttons to start and stop scan and copy jobs.


Below the control panel, in a separate band above the output tray, are sockets for SD, MemoryStick, xD and CompactFlash memory cards, as well as a PictBridge socket which doubles up for USB drives. A large grey lever is set to the left of the output tray and lowers it to the horizontal so you can slide in a CD/DVD carrier, which can also handle mini CDs, though not credit card-shaped discs.

Somewhat surprisingly, given the increased popularity of small networks in the home, the only connection at the back is USB – no cabled or wireless Ethernet.


Setup is straightforward, as the only physical installation is plugging the six ink tanks into the print head. The extra two inks are light cyan and light magenta. Drivers are provided for Windows and OS X and there’s a good selection of Epson utilities, including Easy Photo Print.

It really is about time Epson quoted slightly more realistic speeds for its printers. It’s hard to believe there are many customers who buy a six-colour photo all-in-one and then regularly use it to print text in draft mode. In normal print mode, we recorded a top black text speed of 4.58ppm, against the claimed top draft mode speed of 37ppm. Colour print, which Epson quotes at 38ppm, is more likely to give the 3.37ppm we saw. 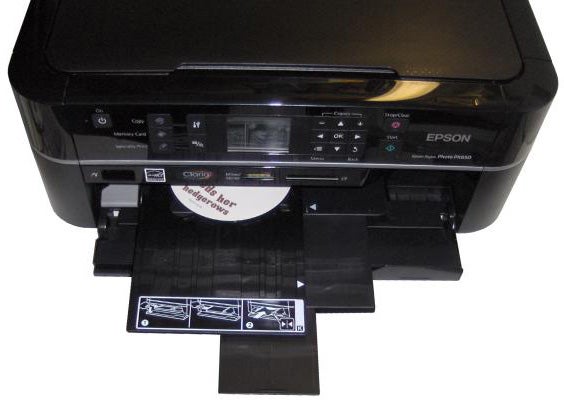 Switching to photo print, 15 x 10cm photos printed in times ranging from 31s to 47s, depending on source, which is very quick. We checked output from a PC, SD card, PictBridge camera and USB and were impressed by the clarity of the images and the natural colours produced, though they were rather dark by default, so losing some detail in the darker shades. You can compensate for this, of course, but it does mean extra fiddling, and with the addition of the two lighter inks, it’s a shame images may need more work than with a four-colour printer.


Black text print is okay, though not as densely black as some and suffers here and there from a little ink spread, so characters can have a slight fuzz to them. Solid colours are generally well reproduced, though we did notice the occasional, thin colour band on our test prints.


A colour photocopy showed quite a bit of colour displacement, with most shades noticeably lighter than the originals and yellows, in particular, coming out with an orange cast. This could be a problem with our particular review sample, though, as other Epson all-in-ones we’ve reviewed haven’t showed as many problems.


The only running costs are the inks and two sets are available for this machine. Epson recommends the lower-capacity set, but the higher-yield parts offer better economy. The high-yield T0791/2/3/4/5/6 inks are available for around £11 each, giving a cost per page of 2.8p for an ISO black page and 9.0p for ISO colour, both including 0.7p for paper. 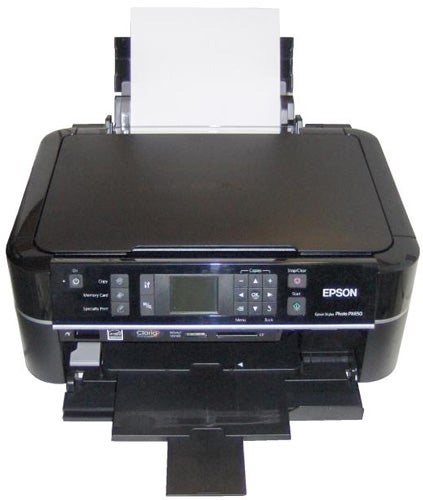 The black page cost is about average for this class of machine, but the colour cost, partly due to the two extra inks, is a bit more expensive. For comparison, the £89 HP Photosmart Plus B209a has a colour page cost of 7.7p, 1.3p less than this Epson.


At £100 from some online retailers, the Epson Stylus Photo PX650 represents good value for money for a machine offering six-colour print and useful extras such as PictBridge/USB print and CD/DVD label printing. However, although it’s fast on photos, it’s slow printing plain paper documents and print quality is, at best, variable. Put it on your shortlist, by all means, but probably not near the top.