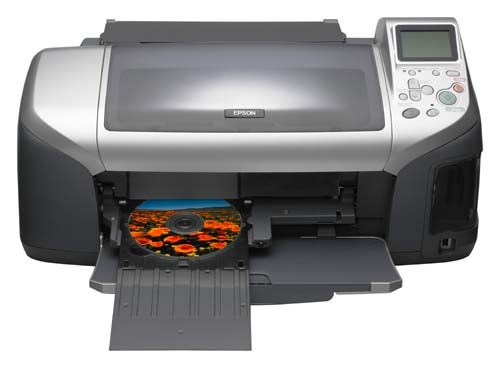 Epson claims to have 74 per cent of the UK photo inkjet market, which seems a bit wishful – that said it’s certainly true that Epson sells a lot of printers into this arena. The Stylus Photo R300 sits near the top of a new range of machines designed with photography enthusiasts in mind. It’s a full six-colour printer, with light cyan and light magenta inks supplementing the core cyan, magenta, yellow and black. The aim is to improve rendition of light tones in areas like skies and skin.


This is a big printer, almost up to all-in-one dimensions, with a conventional paper path flowing from a 120 sheet, near-vertical tray at the rear, through to a telescopic output tray, which folds down from the front of the machine. At bottom right behind a hinged and sprung acrylic door is a set of memory card slots and a USB port, for connecting either a digital camera supporting PictBridge or an external Zip or CD drive.


This second use of a USB port is unusual and gives you the option to download pictures from a camera or its memory card, directly to more permanent media, without the intervention of a PC. A similar USB socket at the back of the printer, this time to the USB 2.0 standard, connects the printer to a PC so you can use the R300 for conventional hardcopy duties.


A second design feature which distinguishes this printer from the majority of its competitors is its LCD screen. It’s mono and it can’t show thumbnails of the pictures you’re intending to print. Epson has gone for an alternative scheme, where the mono LCD is just used for control menus, error messages and a status display. 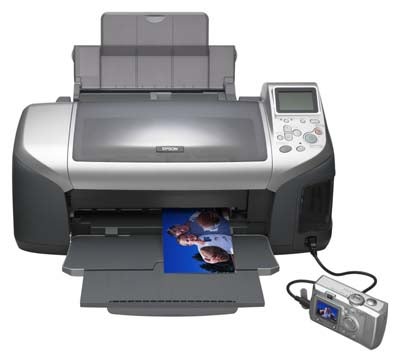 If you want to be able to view and select photos from a digital camera without printing thumbnail sheets – which the R300 can also do – £80 will buy you a 64mm, full-colour preview monitor, to slot in just behind and above the mono display. You can then use both screens to select and print your images. It’s cheaper to buy the printer with the monitor screen included, as the price difference is then only around £50 on the street. There’s a Bluetooth adapter option too, so you can print from a notebook, PDA or camera-equipped mobile phone.


With the front paper tray open, you can unfold a second internal cover and slot in a CD holder that lets you print directly onto printable CDs. This gives a much more professional finish than printing on labels and sticking them onto the CD, though there’s a price premium for this type of media.

The driver, utilities and status monitor installed without problem from the supplied CD and the printer installed under USB quickly and simply. The driver includes options for multi-page sheets, watermarks and manual duplexing, though not for over-printing.


This is definitely a printer aimed at the digital photography market, so we wouldn’t expect a five page text test to print particularly quickly. However, the time of two minutes 21 seconds is pretty poor, averaging not much more than two pages per minute. It’s some way off the 15ppm draft mode speed quoted by Epson.


Print quality is excellent. The R300 produces strong black text and vibrant, dense colour graphics, but it really comes into its own on photographs, as you might expect. Here colours are natural and smooth, with graduated areas particularly clean. 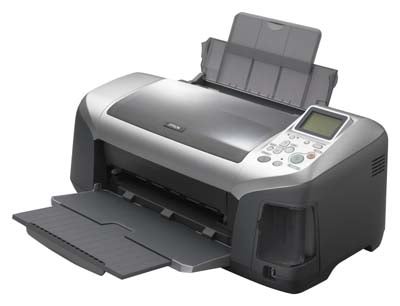 During our ink yield tests, we repeatedly saw a ‘Paper is not set correctly’ error, which is one step off a paper jam and a fault of the paper feed, which failed to pick up sheets of our standard Staples copier stock. This error was frequent enough to prevent us leaving the printer to complete a job while we got on with other work and although it’s perhaps unlikely you would leave a photo printer to print large jobs, it is irritating when you can’t rely on its paper pick-up.


The main printing cost, as with all photo printers, is not the ink but the paper. With Epson Premium Glossy Photo paper still costing around 40p for an A4 sheet (the cheapest we could find) the overall cost comes out at 52.4p for a 30 per cent colour page. Note that’s 30 per cent, rather than 20 per cent, because of the six-colour printing system. A five per cent black text page comes out at around 2.4p. Both figures are reasonable for a printer in this category.


This is a commendable photo printer for the money, which produces very high quality prints on a variety of media. However, there’s a query over its ability to feed plain paper consistently, and don’t be tempted to rush out a text document on it – the text speed is low. If you go for one of these, it’s worth paying the extra for the colour LCD screen at purchase, rather than upgrading later.