Epson has chosen a high-gloss, bluey-grey livery for this compact machine, with highlights in silver and black. It’s managed to reduce the overhang of the paper feed and output trays by holding paper at a close-to-vertical angle at the rear and mounting the print heads well to the back of the machine, so that output pages only protrude a short way onto the telescopic output tray. 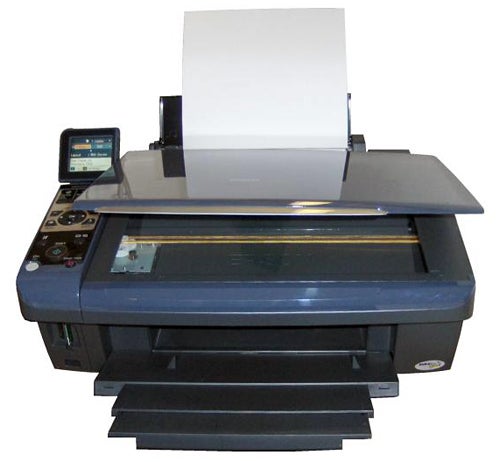 The CCD-based scan-head is surprisingly slim, so the height of the casing can be kept down. Lift the whole scanner unit and you get good access to the four, separate DURABrite Ultra ink cartridges. DURABrite Ultra ink is pigment-based, which means it has better water and light resistance than dye-based inks.


The machine’s control panel, down the left-hand side, has a straightforward layout including mode buttons, a ring of navigation arrows and a big Start button for copies and scans. The 63mm LCD display at the rear folds upwards for better viewing, but feels a little rickety when moved.


Twin memory card sockets lie to the left of the output tray, which take all the common types, including MicroDrive, and there’s a PictBridge socket for camera connection, too. At the back, a USB 2.0 socket is the only way of connecting the machine to a PC. 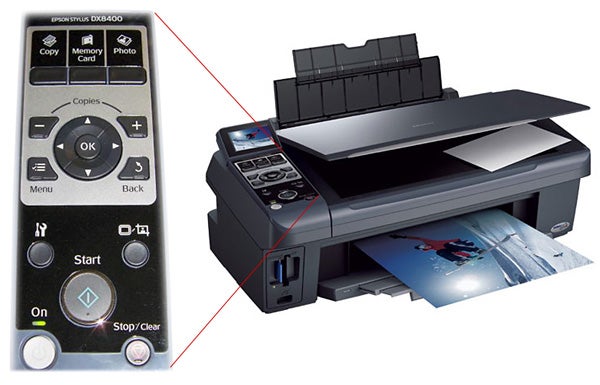 Software is fairly standard fare for an all-in-one printer, and includes Abbyy OCR and Epson’s own utilities for copying, Web print and dealing with RAW images from cameras. The driver supports standard features such as multiple pages per sheet and manual duplexing.


Epson does at least admit its speed claims are for the fastest available print mode, but speeds of 32ppm for both colour and black print are still outlandish. Our five-page text document took 1min 21secs to print in normal mode, which most people will use most of the time, and the five-page text and graphics page completed in 1mins 38secs. These times give speeds of 3.7ppm and 3.1ppm, respectively, around a 10th of the quoted speeds.


All this folly over quoted print speeds could be solved at a stroke if printer makers quoted speed for printing a standard page. Something like one of the ISO pages used in producing page-yield figures would be a good starting point.

The prints we produced with the Stylus DX8400 were good, but not marvellous. Black text still showed some bleed of ink into the paper, though pigment – with its greater particle size – should have stopped that.


There were improvements in the text and graphics prints though, particularly when printing text over coloured backgrounds. Here there was less feathering, so the text looked crisper than from a dye-based printer, such as Canon’s PIXMA iP4500. A single page copy of the text and graphics page was better than many we’ve seen, with only a slight lightening of colours, but a generally good representation of the original. 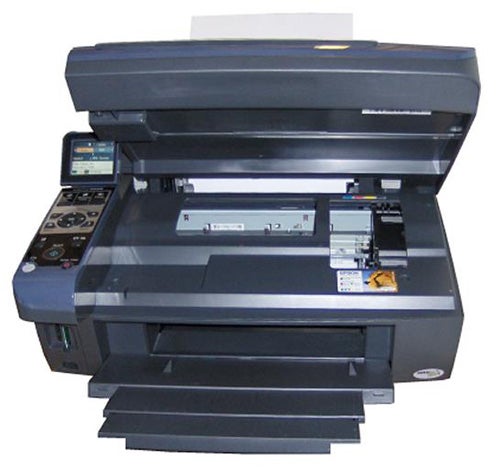 Photo prints were smooth in tone, a function of the high 5,760 x 1,440 resolution, but a little too rich in colour. Over-saturation in darker areas of our test images tended to black-out detail that was in the original image. This can be compensated for through the driver, but the default settings should have done better by default.


Epson doesn’t quote noise levels for its printers and one reason is likely to be the high levels it generates when feeding paper. We measured peaks of 67dBA, which is around the same level as a vacuum cleaner – you wouldn’t want it printing by you while you were on the phone. 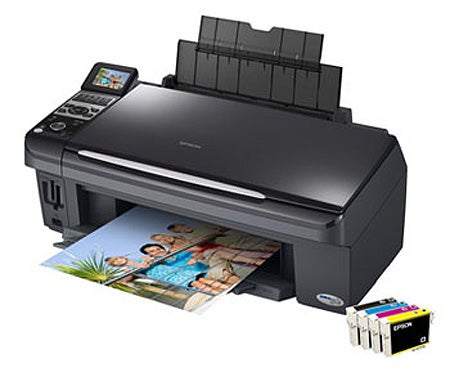 It’s quite awkward to work out running costs for the Stylus DX8400, as there are several ways of buying ink. Each of the four cartridges is available separately, but you can also buy a four-ink multipack. Black ink is also available in a higher-capacity cartridge, though strangely these are only available in twin packs.


The technologies involved in a modern all-in-one printer are now very mature and there are few advances to report in print quality, speed or page costs. The Stylus DX8400 does all the things you’d expect of a general-purpose, home or home-office machine, in a predictable and robust manner. It’s noisier than its main competitors when feeding paper, but in other ways is a good choice.