Getting a complete all-in-one for £40 is a pretty good deal, but there are entry-level machines from all the major makers now, so there’s quite a bit of choice. Epson produces both photo all-in-ones, the Stylus Photo range, and what it calls general-purpose Stylus ones. The Stylus DX4400, with its four pigment-based inks, is designed for home printing, scanning and copying.


The Stylus DX4400 is conventionally styled, but unconventionally coloured in slate grey. With a straight-through paper path from back to front and a fold-down, telescopic output tray, there’s nothing unusual about the physical design, either. According to Epson, the input tray can hold up to 80 sheets of 60gsm paper, but who uses 60gsm paper on a regular basis? We managed to load 80 sheets of standard 80gsm office paper. 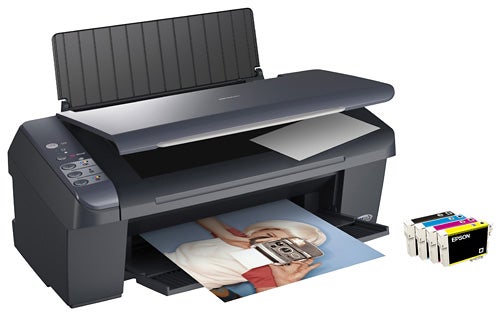 The control panel is simplicity itself; it has five control buttons and three small LED indicators. The buttons turn the machine on and off, stop a current job and start a colour copy, a black copy, or a copy of a photo. There’s no LCD monitor screen and no mono status display, either. It’s perhaps unreasonable to expect one on a machine at this price point and since the Stylus DX4400 has no memory card readers or PictBridge sockets, there’s much less need for one.


There’s a single USB 2.0 socket at the rear and, even on this budget-priced printer, the power supply is internal, which is the neatest solution. Software installation is simple and once the files are copied, Windows recognises the device in the usual way. 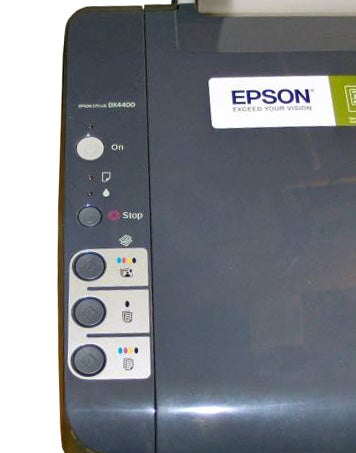 Setting the machine up is comparatively simple. Lift the main scanner section and it rests on a support that can be set in two positions. Each of the four ink cartridges snaps into place in the permanent print-head carrier. Epson, of course, uses a piezoelectric print head, rather than the more common thermal technology.


The software bundle is Epson’s standard fare, with its Creativity Suite and Easy Photo Print taking care of basic photo handling. There’s little in the way of editing software, but the Epson Scan utility is surprisingly sophisticated and in Professional Mode offers colour histogram adjustment and tone correction.


The manual mentions the optical character recognition application Abbyy FineReader, but there’s no installation option for this and we could find no trace of it on the software CD.

The spec sheet for this printer claims print speeds of 25ppm for black print and 13ppm for colour, but even in draft mode these speeds are way off what you’re likely to see in real life. Our five-page text print took 2 minutes 9 seconds to complete, giving a speed of 2.3ppm and the black text and colour graphics print, also five pages, took a pretty exceptional 6:09, just 0.81ppm. Both these speeds are singularly unimpressive, with the colour print being one of the slowest we’ve seen.


The output quality is not too bad given the price of the printer but black characters still come out more jagged than most of the DX440’s rivals. Solid colours are dense with good registration and little bleed of black text over coloured backgrounds. Variegated colour is also very reasonable for this class of machine.


An A4 copy came out quite a bit paler than the original but colours were still solid even though they were lighter. Our photographic print, on Epson’s Premium Glossy photo paper, reproduced well with smooth gradations of colour and fine detail in the foreground. Colours were generally natural, though quite a bit of detail was lost in shadowed areas. 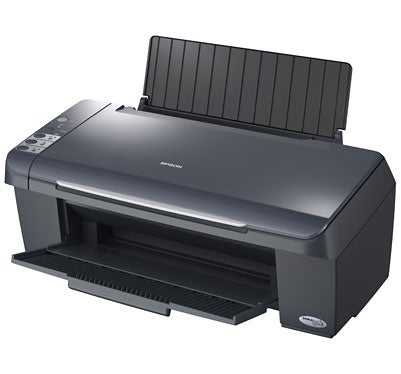 Epson printers have never been known for their quietness. While printing itself is only a little noisier than its main competitors, the Stylus DX4400 rattles away when feeding paper, giving a peak noise reading of 70dBA. This is really quite loud and noisier than most printers, of any technology type, we’ve tested before.


This is a four-colour printer using four separate cartridges. You can replace them individually as they run out and this gives good print economy. The cheapest way to buy cartridges is in a four pack, which sells for around £13.68, giving page costs of 2.22p for black and 4.85p for colour pages.


These costs are very competitive, even with printers costing considerably more, and are pretty much best-in-class compared with the entry-level all-in-ones we’ve tested recently.


The Stylus DX4400 is a mixed bag. Epson has managed to produce a good-looking, functional all-in-one at a very competitive price, while still offering individual ink cartridges and low running costs. Print quality is also reasonable and the printer handles photo printing surprisingly well for a machine not geared specifically to photos.


Where it misses out is on print speed and noise level. It takes a long time to produce a page and could never be described as quiet thanks to Epson’s trademark paper feed mechanism.