What kind of a colour printer can you expect for £30? If it’s the Epson Stylus D92, it’s a good basic design that produces four-colour print using four separate ink cartridges for potentially good economy.


You probably wouldn’t expect anything unusual in a machine at this low, entry-level asking price and Epson’s offering is the epitome of conventional design. With a paper feed from a near-vertical tray at the rear to a clip-on tray at the front – there’s no way of folding these away when the printer isn’t in use – there’s little scope for paper jams. 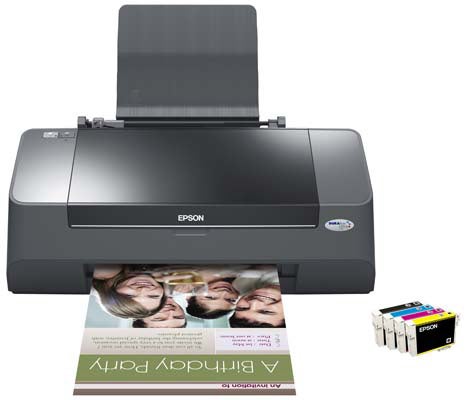 Just two buttons are provided, one to switch the printer on and off and the other to cope with cartridge changes, and the only connection to the outside world is a single USB socket at the back. Even on this low-cost printer, though, Epson manages to build the power supply inside the printer, so there’s no awkward, black block kicking around under the desk.


Once you’ve clipped the four cartridges into the holder on the print head and installed Epson’s decent set of drivers and utilities, you’re ready to print. The driver supports collation, reduction and enlargement of documents, multi-page print of up to four pages per sheet and watermarks, including standard messages and those you enter yourself. 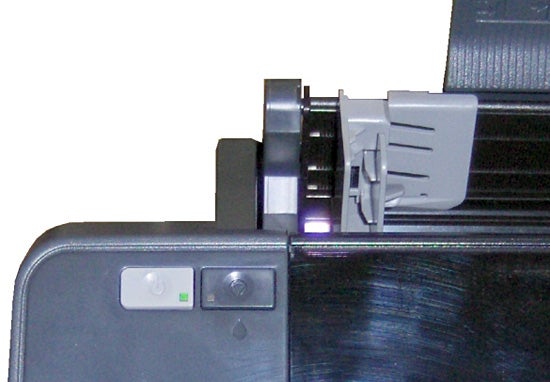 The big difference between the Stylus D92 and other Epson inkjet printers is the speed with which it prints. Although rated at 25ppm for black print and 13ppm for colour, in normal print modes it doesn’t get anywhere near these figures. Our five page, black text print took 2mins 7secs to complete, a speed of 2.36ppm. The five page colour text and graphics test took an incredible 6mins 10secs, which equates to 0.81ppm.


These speeds are very different from the rated ones so we decided to test the printer in draft mode, too, to see if those figures would be closer to Epson’s. In draft, the five-page text print took 31secs and the five-page text and graphics print took 1mins 12secs. That’s 9.7ppm and 4.2ppm, respectively, still a long way off the rated values. We really don’t see how this printer is capable of the speeds claimed for it.


It has to be said, too, that we can’t see many people wanting to use the Stylus D92’s draft mode. Black text looks like something out of a nine-pin dot-matrix printer – one where the ribbon needs replacing – and pale colours are so faint they’re barely visible.

Prints in normal mode are much better. Text is dense and clean and, although the edges of characters look a little stepped, particularly on diagonals and curves, it’s perfectly presentable for day-to-day work. Colour also reproduces well, with smooth tints and no visible banding. Black text over coloured backgrounds is well registered and looks smart. 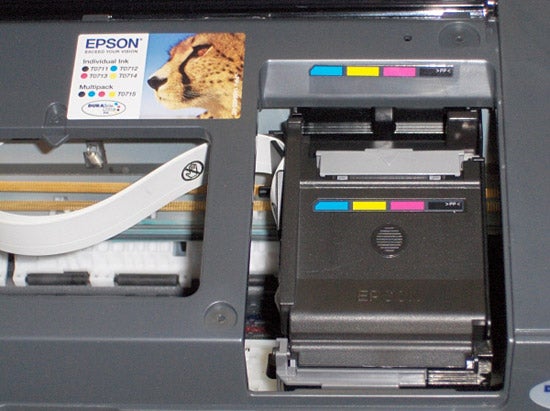 A test photo print, in best print mode, took 4mins 24secs to produce, but looks good. Graduated tints in the sky are smooth and free of much dither patterning, though some of these shadow detail is lost to black. We also printed the same image in normal photo mode; this took 2mins 6secs, less than half the time and, unless you look very closely, it’s hard to tell the difference.


The other place where Epson is decidedly wishful in its spec is the noise level. The company claims 45dBA, but even while printing we measured peaks of 62dBA and when feeding paper this rose to 78dBA; really very loud. 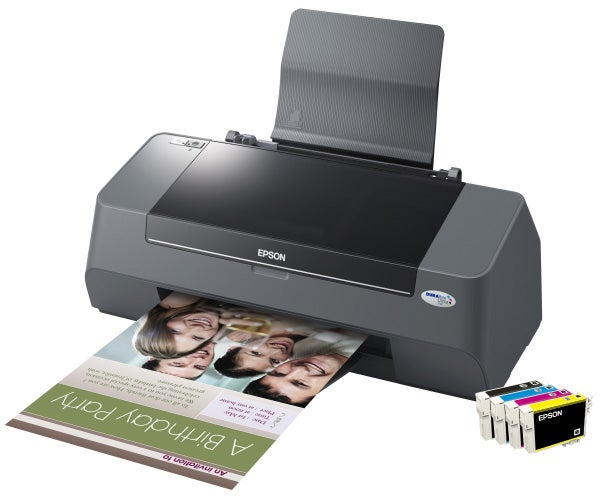 The danger of having a printer with a street price of under £30 is that you get very close to the price of a set of ink cartridges. The Stylus D92 uses four cartridges which you can buy in a four-pack for under £21, only around six pounds cheaper than a new printer. Since Epson will be making a lot more on the cartridges than on the printer itself, this differential may need looking at.


Working out the cost per page, using Epson’s ISO page yield figures – ones that are very difficult to exaggerate – gives 2.91p for black and 6.93p for colour. The black page cost is a little on the high side, but the colour cost is low compared with its main rivals. This is unusual, as printers with low asking prices typically cost more to run. Not so here; this is an inexpensive printer with inexpensive running costs.


The Epson Stylus D92 is quite a mixture. On the plus side, it’s very inexpensive to buy and surprisingly inexpensive to run. It produces very passable black and colour print on plain paper and good quality photos on Epson’s glossy photo paper.


Against this, it does everything extraordinarily slowly and is very noisy when feeding paper. As a printer for occasional use or in an environment, like a teenage study bedroom, where noise levels aren’t normally a problem, it represents extremely good value. In fact, with a pair of ear defenders and a filter coffee maker, you might not notice its downside at all.