The sales pitch for Epson’s new Stylus D120 is that it makes a sensible alternative to a personal laser printer in a small or home office. Rather than restricting yourself to a mono printer, the argument goes; you can get the same kind of speed, quality and running costs from an inkjet and have the facility for colour print when you need it. Given that sales of personal laser printers have died a death over the last 10 years, against the onward march of inkjet, we reckon that battle has largely been won.


The Stylus D120 is about as conventional as an inkjet printer can be from the outside. A flip-up paper support at the rear reveals a paper feed tray where paper passes through the machine to a telescopic output tray, which folds down from its front panel. The top cover lifts to reveal a typical Epson piezo-electric head design, which takes five ink cartridges. 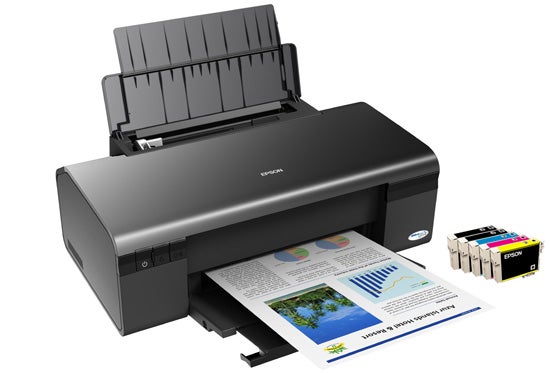 
As for the controls, there are three buttons in a high-gloss strip at the top of the front panel for power, ink-change and paper-feed, with a power and a USB 2.0 socket at the rear rounding things off. For your information, no USB cable is supplied in the box.


Installation is very straightforward, as the standard set of Epson utilities are mature now and copy across automatically. The printer driver is well laid out and includes features such as watermarks, multi-pages per sheet and reduction and enlargement. 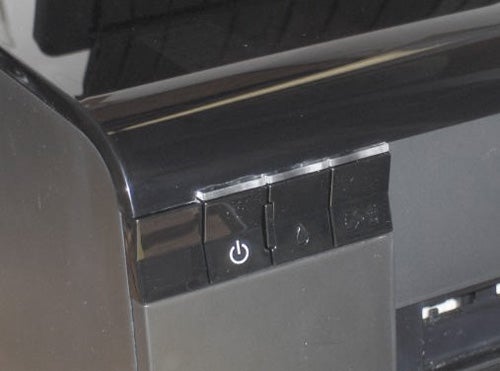 Ink-jet printing is inherently quiet as it is a no-contact technique with drops of ink the only thing to touch the paper. Epson quotes a commendably quiet 39dBA for the Stylus D120, but this is in the middle of printing a picture in best quality mode. For more regular printing – of, say, a text document – the paper feed between pages makes much more noise. We measured it at peaks of 68dBA, which is obtrusively noisy and higher than its main competitors.


To be an effective alternative to a laser, an inkjet has to produce print of similar quality, at similar speed and costing a similar amount per page. Epson claims speeds of 25ppm and 11ppm for black and colour text printing, respectively, at normal print settings.


Under test, our sample took 27 seconds to complete the five-page black text document, giving a print speed of 11ppm, and 1 minute 41 seconds to run the colour text and graphics test, which equates to 2.9ppm. Neither of these speeds is anywhere near the company’s claims, but the important thing is how they compare with those from a similarly priced personal laser.

When we tested HP’s LaserJet 1018, which can now be had for around £50, it completed the five-page text print in 34 seconds and the text and graphics test – printed in mono, of course – in 31 seconds, so a comparable turn of speed.


Print quality is generally good on plain paper, with only a little fuzziness evident around some characters. Colour graphics are also fair, though there is obvious dithering to achieve subtler shades. Text over coloured backgrounds prints well and draft print, which is noisy but marginally quicker than normal mode, is better quality than many printers’ draft mode, certainly good enough for personal reference documents. 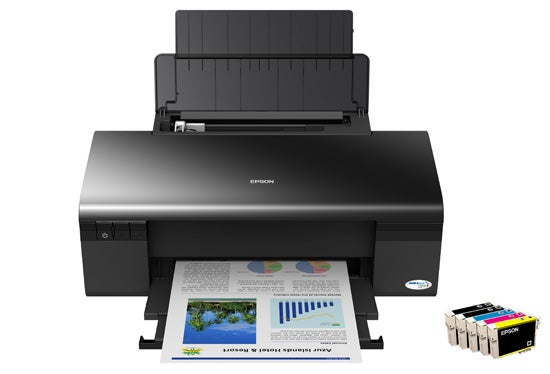 Our test photo print in best mode shows plenty of detail, even in darker areas, though again you can see some of the stipple pattern in large areas of colour. If you switch to normal print mode, which is considerably quicker than best mode, some micro-striping is visible across the image, though this may still be OK for internal use.


As mentioned previously, the Stylus D120 uses five separate ink tanks, two of which supply black ink. Both cartridges have to have ink left in them for the printer to work. Black cartridges are available in two capacities and in single or twin packs, which makes page cost calculations a bit more complicated. We’ve used a twin-pack of high-capacity cartridges in calculation, as this gives the cheapest running costs, which we calculate at 3.04p per page. 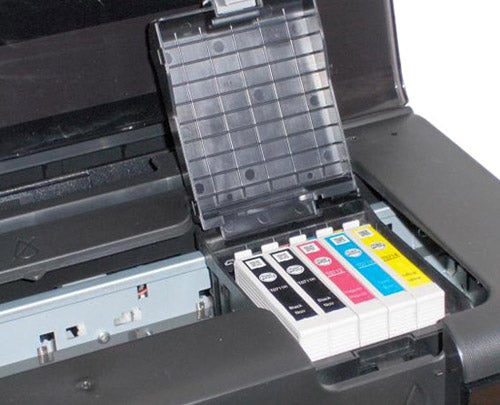 To use the lowest cost combination of inks for colour printing, we’ve taken the four-pack of cyan, magenta, yellow and standard-yield black, which is cheaper than buying four cartridges separately, and added in the cost of a second standard-yield black cartridge. Here the calculation gives an overall cost for an ISO colour page of 10.24p.


Both these costs are quite high, in comparison with other inkjet printers we’ve tested recently, and the black cost is double that from some mono laser printers. For comparison, the HP LaserJet 1018 costs 2.35p for a 5% cover page.


The Stylus D120 is best summed up as a general-purpose ink-jet printer with provision for an extra black ink tank. It offers print speeds similar to entry-level mono lasers, but black print quality is not as crisp. Cost of printing is also quite a bit higher, so the decision whether to use an inkjet or a personal mono laser printer is still down to how often you need colour. This has always been the advantage of an inkjet and until we see colour laser printers at below £100, it’s a more important criterion than speed or cost.