The so-called ‘appliance’ photo printer, designed like a domestic toaster, is one of the fastest growing markets for manufacturers and Epson joined the fray early on. Its latest PictureMate printer, the 500, goes some way further than the competition by offering six-colour printing, where others offer three or four.


This convenient printer is around the size of a small ghetto blaster and comes with a handy carrying handle, though the rechargeable battery pack giving it full portability is an optional extra. If you can have a ‘traditional’ layout on a type of printer which has only been around for a couple of years, the PictureMate 500 follows it. 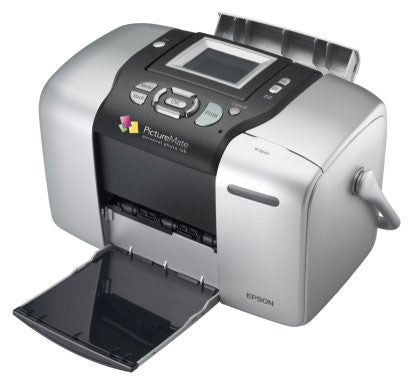 At the top is a 2.4-inch colour LCD screen, which can be pulled up to any convenient angle, with a small control panel of buttons just in front. These are used to work through the on-screen menus and to select images for printing. A second fold-down panel at the front reveals a set of memory card slots, so you can print directly from a card full of photo images.


A feed tray folds out from the back panel of the printer and the front panel folds down to catch the prints on exit. You can load up to 20 sheets of photo paper at a time. At the back are sockets for a PictBridge camera and a USB 2.0 connection to a PC.


The optional lithium-ion battery pack slides in under a hatch cover at the back of the printer and ensures you can print away from the mains. However, it’ll set you back around £50, so it’s not a trivial extra. There’s a carrying case as well, if you need to regularly take the printer from site to site. 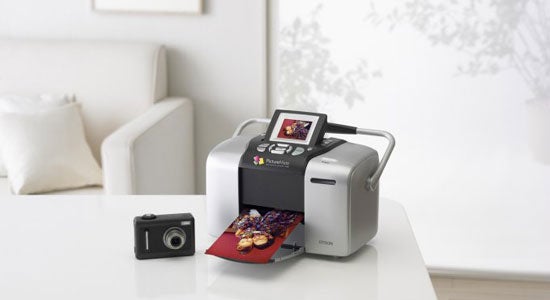 Unlike most Epson inkjet printers, where the tanks of ink clip into a carrier on the back of the print head itself, the PictureMate 500 joins previous PictureMates in using a single-piece cartridge which runs the full width of the printer and slides into a slot at the back. Ink is pumped to the print head through flexible tubes and the cartridge contains six different colours, supplementing cyan, magenta, yellow and black with light cyan and light magenta.


With less complication than a general-purpose inkjet printer – only one print size and no need for complex paper options – the Windows print driver is comparatively simple. It does all that’s needed to be able to print images directly from your PC and uses a fuel-gauge style display to show ink usage.

Plug in a card or connect a PictBridge camera and you can view your shots on the LCD display and select those you want to print. If you select and print them one by one, the printer annoyingly reverts to the first shot in card or camera after each print, rather than continuing from where you were. It’s better to make all your selections and print them in a batch.


Also, each image that comes up on the display starts ‘fuzzy’ and is then brought into focus in a second scan, which can be off-putting. It’s similar to the way images used to display on the Web in several passes, before download speeds improved. 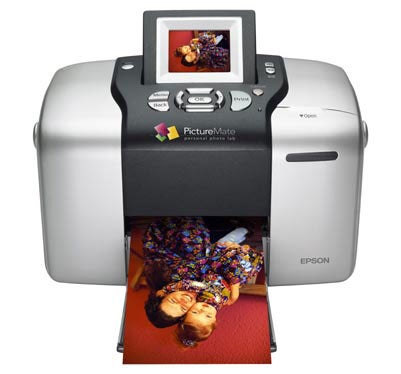 Print speeds aren’t quite what Epson makes out. The company claims a 6 x 4in (15cm x 10cm) print completes in 1 minute 17 seconds, but we saw nothing out in under 1 minute 26 seconds, whether from memory card, camera or PC. That’s still not too bad though.


Print quality is very, very good. The six-colour print system really improves light shades, giving them extra vibrancy and adding a fidelity we’ve rarely seen from an inkjet print. Even with the enhanced resolution of 5,760 by 1,440, though, you can still see some dots in areas of smoothly changing colour, like cloudless sky.


It’s a growing trend for photo printer manufacturers to bundle ink cartridge and photo paper in one pack and since its launch, Epson has been selling a 100-print pack for around £28. The company has just increased the capacity of this PicturePack to 135 prints, while keeping the price the same, so a single print now comes out at around 25p, including VAT. This is quite a bit cheaper than most of its rivals and goes some way to answer complaints about consumable costs.


This is a very neat, simple printer, giving superb quality prints with a minimum of fuss. Able to print directly from a PictBridge camera, just about any memory card or from your PC, it’s also very versatile. With just a single ink cartridge for its six-colour print system, it could hardly be easier to maintain and since Epson has increased the number of prints from its PicturePack, it’s also one of the cheapest photo printers to run. Hard to fault, really.