After a printer, I would say that a flatbed scanner is typically the next most important part of a PC-user’s setup. Of course, how essential you regard this bit of kit largely depends on your requirements. For instance, if you’re just scanning in run of the mill text documents then a top of the range scanner is not really needed. However, if like me you have more than a passing interest in photography then a scanner such as this Epson Perfection 3170 photo will surely appeal to you. The reason? Well, not only can it perform everyday scanning tasks, but it can also be used to scan photographic film from a range of formats.


I have to admit that I use one of Epson’s Perfection scanners at home and I’ve been impressed with the results from that. However, I wasn’t so keen on the external film adapter that I had to plug in every time I wanted to scan in my negatives and transparencies. This has all changed now, and the 3170 comes complete with the film adapter built into the removable lid. As you can see from the images, this film adapter basically consists of a light diffusing strip that runs along the lid’s length. Behind this is a secondary light that shines through the film ready for when the six-line CCD sensor travels underneath the glass document table in a single pass.


In order for the film to be positioned correctly, Epson has included three film holders. One for scanning up to 12 35mm negatives, another for four slides/transparencies, and a final one for a single medium format (120/220 or 6 x 9cm) frame.


Loading these was relatively easy but if you get stuck the excellent CD-based documentation gives clear explanations on what to do. Furthermore, remember to plug the cable that protrudes from the lid into the main base of the 3170, otherwise you’ll get nowhere. For storage, two of the holders can be tucked away behind the sponge-backed A4 document cover (see picture).


Before I get onto any results let’s take a closer look at the features. First up, Epson claims a top optical resolution of 3,200 x 6,200 dpi. I always take this with a pinch of salt as resolution largely depends on the optical quality of the lens. That said, it certainly needs to be a relatively high-resolution scanner in order for detail to be resolved from media such as 35mm film. It’s also a 48bit scanner, which literally means you have a 16bit analogue to digital converter addressing each of the three RGB primary colours. This should allow for better shadow detail and smoother tonal ranges. There’s no FireWire interface, but a USB 2.0 port and the necessary cabling are supplied.


Around the front of the unit you’ve got four buttons. These include a scan to web function that, when pressed, scans an image and then uploads it to the Epson photo-sharing site. The scan to email button works in a similar shortcut fashion and you can even choose which mail program to use if you have more than one installed.


Of the two remaining buttons one activates the copying function – with an interface that actually looks like a photocopier’s – whereas the other is of course Epson’s familiar start button which can be assigned to any of the 10 programs found in the Smart Panel by simply selecting one from a drop down menu.


However, it’s worth noting that under Windows XP I had to manually assign the Epson Smart Panel applet to each of these four buttons before they would launch the programs.

These shortcut buttons can really speed things up if you’re churning out the scans, which is why the driver carries a full Auto mode that automatically previews the images and recognizes the document source and type. There are no settings or adjustments to worry about here and to be honest the 3170 rarely tripped up in tests using this mode. On the other hand, if a little more control is what you’re after, then the Home mode allows adjustment of the basic image settings. Lastly, there’s the Professional mode, which is essential for complete control over how the final image is produced. For instance, I could sharpen, correct or enhance the colour of images before scanning them in. Furthermore if you need to scan a large number of equal-sized documents an optional automatic document feeder is available and when fitted offers an ‘Office’ mode. This forgoes any form of preview thereby speeding up the scanning process.


In addition to these modes, several of the 10 programs mentioned earlier warrant a mention. For instance, PDA users may find the ‘scan to PDA’ feature a useful one for scanning and converting images quickly to a PDA-enabled file format. Other users with a million business cards floating around their desks could find the ‘business card’ application ideal for digitising and organising the contact details. That said be aware that it threw up some interesting postcodes and email addresses from the cards I scanned in.


Each applet is intuitive and the settings are thankfully held in memory ready for the next scan (you’d be surprised how many scanners reset the settings after each scan). However, it’s not all about software design, and the quality and speeds of the scans are of course the key issues.


As you can see from the graph there is a difference between the scan speeds stated by Epson and those I recorded under tests. That said, the difference is not huge and overall I am very impressed by the figures. Let’s face it, 12 seconds for a 48bit A4 colour scan is pretty nifty bearing in mind that the time was measured from the moment I clicked on ‘scan’ to the image being fully loaded into my photo-editing suite. The rest of the times are equally good although for colour negatives at 2,400dpi and 3,200dpi expect a longer wait due to heavier processing.


Quality-wise the 3170 surpassed what I expected from a flatbed scanner, especially when it came to scanning film. While it’s safe to say that a dedicated film scanner will almost always produce better results, the definition in the scans of my colour negatives and the colour accuracy in my transparencies are both splendid. The only tiny issue I had was the difference in colour saturation between the image scanned from a negative, and the one scanned from a professional print of that negative. Still, I am comparing different reproduction technologies and besides, the colour was easily corrected using Adobe Photoshop Elements 2.0, which came in the box. Lastly, I was also impressed by the overall quality of general A4 scans and the OCR accuracy when the 3170 is used in conjunction with the supplied yet limited version of ABBYY FineReader 5.0 Sprint software. No miss-read words were detected after scanning from a typical A4 letter typed with a 10-point Arial font.


After repeated test scans, close scrutiny of line resolution and greyscales, and a good amount of time familiarising myself with this scanner, the 3170 is without doubt one of the best I’ve come across. What’s more, it comes with a solid range of software and looks the part with its translucent black and silver-grey chassis.


With good scan times and excellent image reproduction quality, there’s little to fault the Epson Perfection 3170 Photo. The 3170 successfully merges a high-quality flatbed with a decent film scanner that will appeal to home users and imaging enthusiasts alike. At £175 you’re getting a lot for your money and the 3170 clearly deserves an Editor’s Choice award.

Judging colour is a difficult task at the best of times. However, the overall tone of the scan made from the negative looks a little under-saturated. Nevertheless, it is easy to compensate for this in the majority of photo editing suites as well as through the Epson driver. 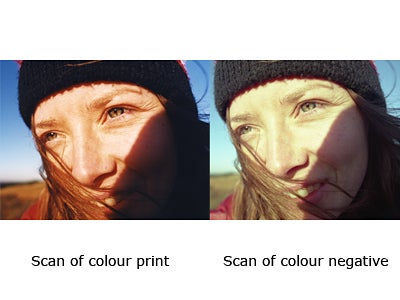 This montage shows the level of definition you can expect from this scanner when it is used to scan from colour negatives. Pic b. is a scan of a professional print made from the same negative. Ignoring the differences in colour stauration, the 3170 shows that it can capture a decent level of detail especially when you consider the rather small 35mm scan area. 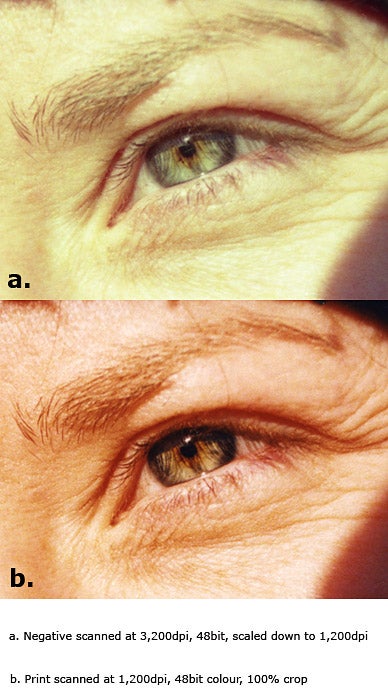 This is a postive scan from a transparency/slide. Granted, this is a small version of the full scan, but it does give you an indication of the detail captured and the colour accuracy. The insert shows the quality of the scan at 100% resolution (ie. 3,200dpi). You can notice some fuzziness, but like the negative scans this is still a commendable result from such a small original. 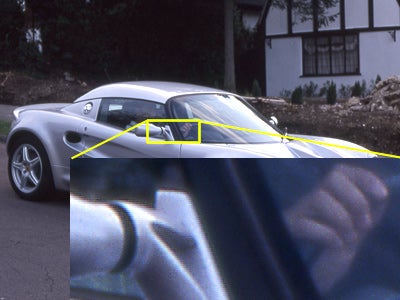