I should imagine that there aren’t many digital photographers around that haven’t run out of space now and then; the dreaded ‘card full’ symbol is enough to make anyone mutter a few expletives under the breath. Fortunately, Epson have come to the rescue with a handy little storage viewer that will fit into virtually any camera bag pocket. Now you don’t need to panic when you’re down to your last few megabytes of space! 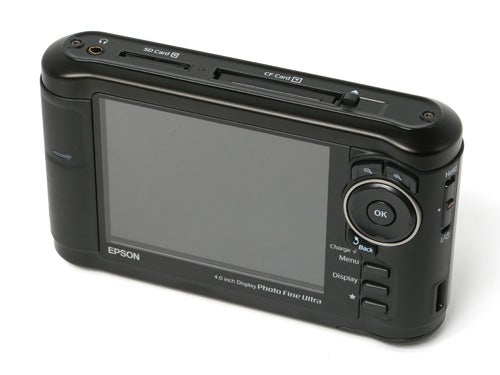 The P-5000 is a versatile, reasonably well put together package that goes above a beyond a simple picture viewer. It offers a variety of card formats, video and audio capabilities, and a respectable list of practical features, including a gorgeous high definition LCD screen, a fast 80 gigabyte hard disc drive, a rechargeable Li-On battery for long life, and a high speed USB 2.0 connection for complete storage and management capabilities for both PC and Mac operating systems. 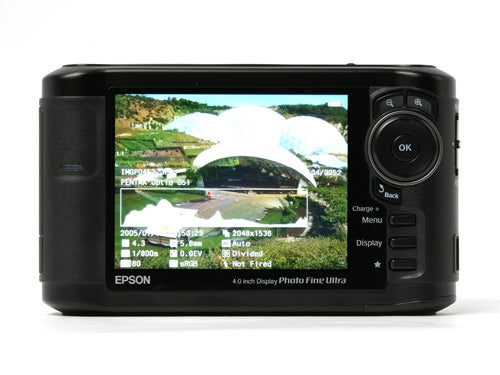 Physically, the unit is intuitive to work with, comfortable to hold with the majority of the work being done with the right thumb. The two memory card slots are sensibly placed on the top for easy access along with the headphone socket. The remainder of the connectivity hardware is situated under flush fitting rubber flaps on the left hand edge. These consist of an A/V Out, two high speed USB2.0 connectors, a mains adapter socket and a reset button. One interesting point to note is the placement of the speaker. Unfortunately it’s on the bottom, nestling neatly within the confines of a remarkably soundproof rim. If you plan to indulge in movies or music you’ll need your headphones. The four inch, 640×480 screen is probably one of the nicest I’ve seen on a device of this size. Using low temperature polysilicon TFT technology, the quality of this display is superb, colours are warm and well defined, whilst grey scales have excellent contrast and sharp, crisp edges.

The array of media the P-5000 supports is impressive overall, but is left a little wanting on the photographic side. It will quite happily load JPEG and RAW files, (with limitations, see specs) but surprisingly there is no support for TIFF files, or any other still image format for that matter. Video formats on the other hand include most MPEGs, DivX, AVC, Windows media video, Motion JPEGs and even the new H.264 format. 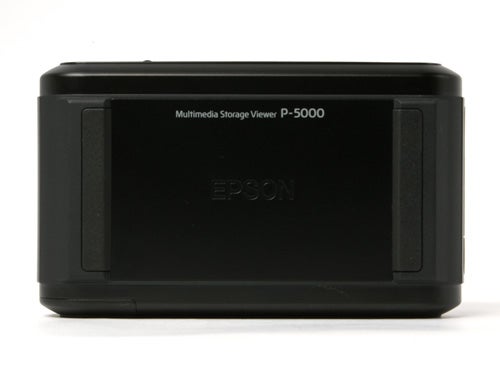 On the audio side there are the standard MP3 and AAC, plus Windows audio. Memory card support is limited to two slots, one Secure Digital and one Compact Flash. But in actuality you can use SD/SDHC, Multimedia, Compact Flash, and Microdrive formats. Other cards can be used, but only with an appropriate adapter. The only limit is on the Multimedia card, which is restricted to one gigabyte. 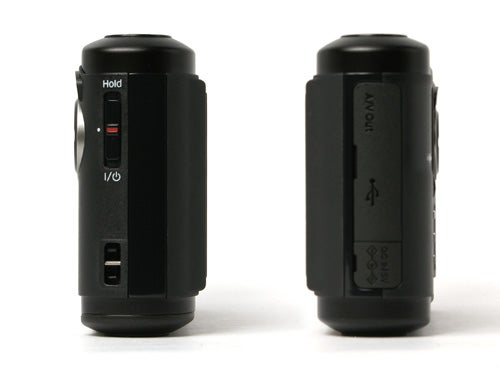 To ascertain an accurate view of comparative speeds, I conducted a series of read/write tests, the results of which are displayed here. To be honest, I was a little disappointed at the outcome. Admittedly there isn’t much in it as you can see, but if I’m going to spend a little under five hundred quid on a dedicated unit like this, I would expect at least similar results to those from my home PC or laptop. The tests involved reading and writing half gig chunks of data, one with numerous small JPEG files, one with several large video files, and one more with an average mix. I didn’t anticipate much difference between the two considering they’re doing the same job in both cases, transferring data to and from a hard drive and a memory card.

The data speaks for itself though, the P-5000 performed slower in every test, with the solitary exception of the Microdrive which wrote faster in all three tests. If you’re not too worried about access times or if you don’t have access to a computer, then these figures won’t mean much, after all they are only comparative, but since you can get a decent laptop for not much more than the cost of the P-5000 it’s worth thinking about.

This brings us neatly onto general connectivity. The unit sports two high speed USB sockets that can be utilized for a variety of tasks. The first, a ‘Host’ connection is for attaching a computer or camera. The second connection, ‘Device’ is to make use of a PictBridge printer or an external memory device. Which is odd because surely the P-5000 IS an external memory device? To make use of the computer support you’ll need Windows 2000 Pro, XP Pro, XP Home, or Mac OS X (10.2 or later) The software itself comes not on a CD ROM as you would expect, but as an executable file on the unit’s drive. After some tinkering I got the application up and running. It does what it says on the box, transfers files. It has no features to speak of, certainly nothing worth mentioning. 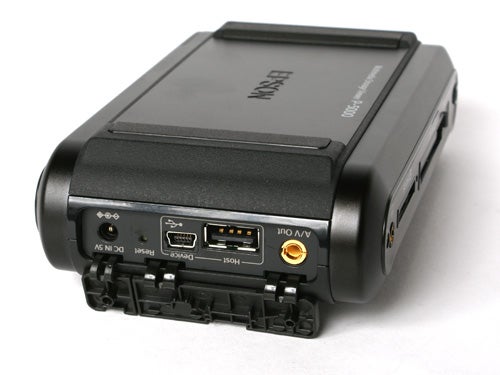 The control system for the P-5000 is much the same as the software, adequate and functional. It consists of clear-cut text based menus comprising of: My Music, View Rated Files, My Videos, My Photos, Backup Files, Memory Card, USB Devices, and Settings. Most of the entries are simple folder navigation menus allowing you to access files. Video and still images are all displayed as thumbnails, and highlighting and pressing ok will view that image or video. The Memory Card option lets you backup or browse an inserted card. It would have been nice to have seen a little imagination in design, but it does the job. Just. 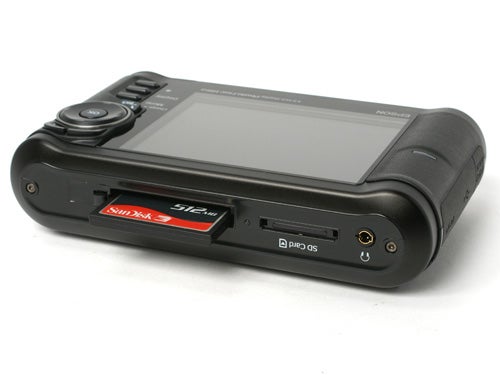 There’s no doubt the P-5000 is a handy, versatile viewer that performs well enough. Its hardware is up to date and capable, utilizing fast USB 2.0 technology and supports the most popular card formats. The heart of the machine, the screen, is lovely, sixteen million colours in high definition really looks the part. Video is smooth and crisp, with an excellent range of formats. Audio is the same, nice and clean, with a good range of frequencies. I would have liked to seen more photographic formats, TIFF especially. To my mind what really lets the unit down is the software, both the operating system and the PC/Mac software could be so much better. If as much effort had gone into the OS as the hardware it would be a very different animal.