What is the Epson Expression Photo XP-750?

All-in-one printers are still a popular genre and Epson has a good range, with the Expression Photo XP-750 sitting near the top. It has a number of extras, including triple paper sources, direct CD/DVD print and six ink colours.

With a lot of polished black plastic it’s something of a fingerprint trap, but also has a surprisingly small desktop footprint, given its feature set. The flatbed scanner has no Automatic Document Feeder (ADF), but a simple flatbed, and its lid hinges don’t extend to accommodate bound documents. 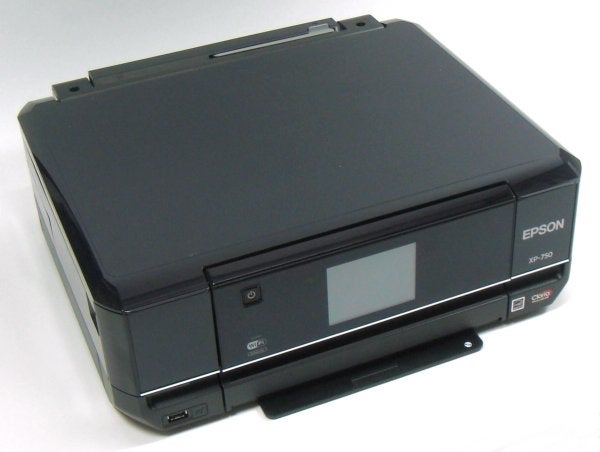 In front of the scanner is a fold-out control panel, with an 88mm touchscreen and dedicated touch buttons down either side. The menu structure is straightforward and it’s easy to find your way to most tasks.

Below the control panel is a slightly confusing array of trays. At the top is the output tray, which drives out under power when printing starts. The control panel also raises automatically, if it’s in a position to obstruct paper feed. Neither of these powered parts can be driven back again, though; they have to be pushed in by hand, against their mechanisms. 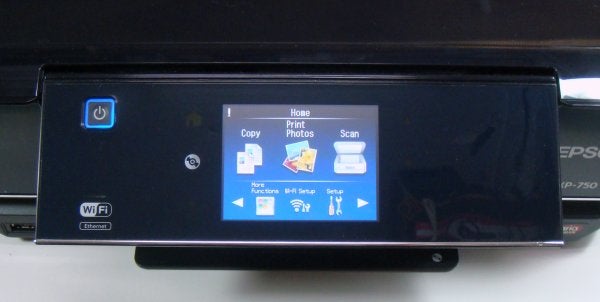 In the front edge of the tray is a slot for the CD/DVD carrier, which is stored under the machine and projects from its front edge at desktop level. Below are two feed trays, the bottom one taking up to 100 sheets of plain paper and the top one up to 20 sheets of 15 x 10cm photo blanks. Finally, at the back is a fold up support for single sheets of special media.

To the left of the front trays a swing-open cover provides access to three memory card slots, including CompactFlash, with a front panel socket below for USB drives. The six ink cartridges, with light cyan and light magenta added to the standard four inks, clip into the head carrier, once you’ve hinged up the scanner section of the machine.

USB and 10/100 Ethernet connections are provided at the back of the Epson Expression Photo XP-750, but there’s also wireless provision, which includes WPS setup. Bundled software includes Abbyy Finereader Sprint for OCR and Epson utilities for most other tasks.